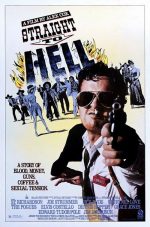 It’s fair to say that Straight to Hell isn’t widely considered to be one of director Alex Cox’s best films. Some people may even consider it to be his worst – especially as Repo Man seems to retain an unfathomable level of popularity. However, whilst its creation, cast, setting and gonzo punk style, make it an undeniable curiosity, it is its adaptation and reclamation of popular genre style, that may make Straight to Hell Cox’s most notably cine-literate film.

For the uninitiated: Cox was the punk filmmaker who made it big early on, blew it nearly as quickly, and has steadfastly done his own thing ever since. His initial early successes in the mid-80s with Repo Man – a sci-fi action comedy backed big by Universal Studios and starring Emilio Estevez – and Sid and Nancy – a dramatisation of the final days of the original Sex Pistols bassist – left Cox in prime position and, it is widely claimed, he was offered the helm of Steve Martin vehicle ¡Three Amigos! as a result. 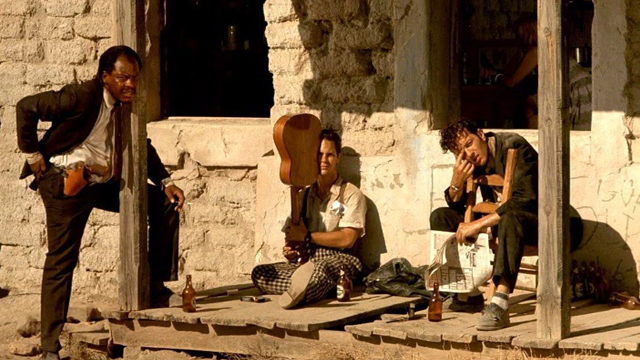 In a move that, perhaps, perfectly sums up the idiosyncratic approach Cox has taken to his career, he decided, instead, to arrange a tour of Nicaragua with musicians Elvis Costello, Joe Strummer and The Pogues, in sympathy with the Sandinista movement. A lack of funding due to political uncertainties over the left-wing guerillas lead the plan to be dropped, in lieu of making a movie – or as Cox puts it:

“[I]t was easier to raise $1m for a low-budget feature starring various musicians than to find $75,000 to film them playing [a gig] in a revolutionary nation in the middle of a war.”

That explanation of its genesis is perhaps the best way of understanding what Straight to Hell is – a daffy genre picture, designed as something of a parody, made to earn a fast buck and, most notably, featuring as one of its main stars, the lead singer of The Clash. No-one takes things very seriously in this movie, least of all Strummer – and with good reason. 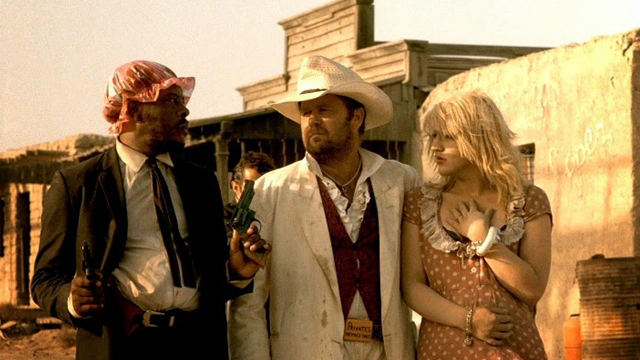 First things first – that title. Yes, Straight to Hell is also the name of a Clash song; and yes, this film stars the band’s lead singer, Joe Strummer. But, no, at no point does ‘Straight to Hell’ actually appear on the soundtrack. Nothing has yet come to light as to why Cox particularly chose that song’s title over any other Clash classics – why not, say, ‘Guns of Brixton’ or ‘I Fought the Law’? Still, it does give the parodic opening titles the feel of one of those 70s Sam Peckinpah westerns.

The plot, such as it is, is largely standard western fare. A bunch of guns-for-hire, led by Norwood (Sy Richardson), ride/stumble into a seedy town, under threat from a gang. There’s thwarted romance for Willy (Dick Rude) and Simms (Strummer), violence from all concerned, and some rather dubious singing, before it all culminates in a big gunfight at the end. Throw on top a pre-title sequence assassination gone wrong, a bank job’s profits buried in the desert, Norwood’s heavily pregnant wife Velma (Courtney Love) and the coffee-addicts the gang ingratiates themselves with and, there’s a lot jammed in, in just [under] one hundred minutes. 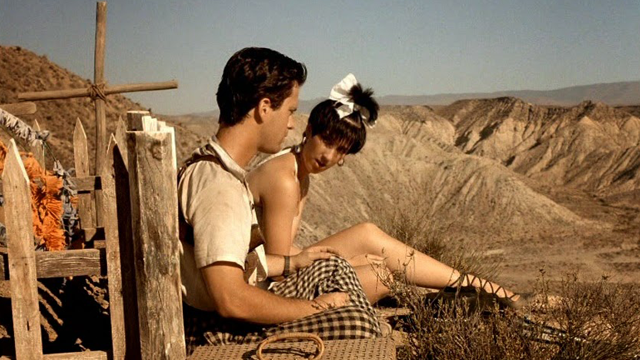 The plot is not, in the main, very engaging. It’s not just the tropes, so much, as the ‘throw it at the wall, and see what sticks’ approach that Cox demonstrates. One interview with Cox I found lists the various movies that the director makes homage to, within the movie’s plot:

Beyond that list, there are scores of other movie references that have been so worn into the groove of popular cinema that they are no longer unique to specific films: the drifter, the big boss, the failing marriage, the criminal family, and so forth.

On top of this, the script feels loose and improvised, meaning the non-action sequences lack real emphasis and the acting, as one might well expect from the likes of Ed Tudor-Pole and Shane McGowan, veers from school play bad to self-knowingly hammy. Courtney Love, in particular, spends a lot of the movie screeching exposition at the three leading men. 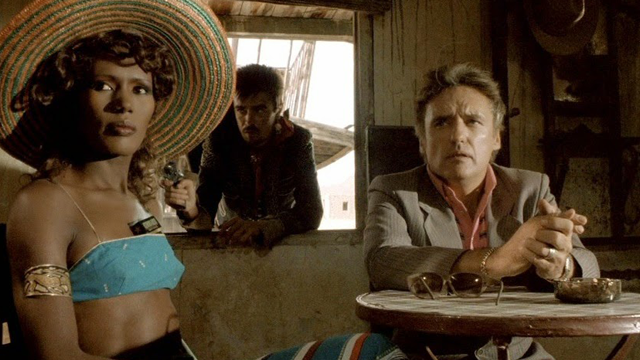 And yet, there are some real plus-points. Cinematically, Cox’s choice of shooting in Southern Spain is inspired – not least as the film is able to make use of sets created for the Charles Bronson vehicle Chino. On top of this, the cast looks incredible, with the film making no secret of its anachronistic tendencies, dressing them in costumes ranging from pink hotpants, mariachi suits and ’80s new-wave fashions. And, mixed in with the punks, there are some real star draws here with future Hollywood character actors Xander Berkely as the town’s preacher and Miguel Sandoval as its hardware store owner. Even Hollywood legend Dennis Hopper pops up as a devilish developer, stirring up trouble, carrying a heavy machine gun in a suitcase and Grace Jones on his arm. More than anything, Sy Richardson is a formidable presence – a dry-witted, stone-faced, remorseless killer whose only concern is where his next beer is coming from.

Furthermore – it is perhaps, a facile comparison, but it’s worth stating: this movie was made six years prior to the release of Reservoir Dogs and eight before Pulp Fiction – both of whose plots centre around the dysfunctional habits of professional criminals in cheap black suits. What we now see as almost standard movie fare about lowlife scumbags, drinking and smoking in desert temperatures, engaging in shootouts over deals gone wrong and honour insulted, was brought to life by Quentin Tarantino: but Cox beat him to it. 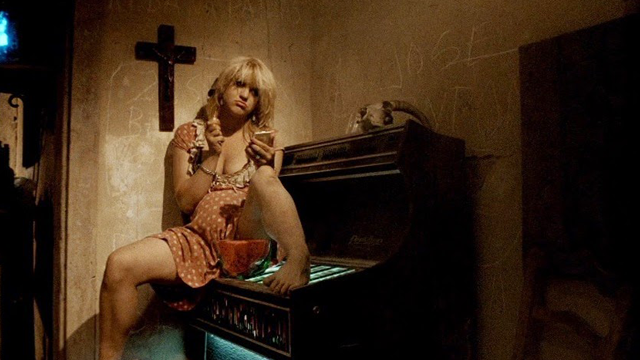 What’s more, Straight to Hell not only pre-empts Tarantino’s work in reviving older film genre, particularly the gangster and western archetypes, but foreshadows a general mood of revivalism within Hollywood in the ’90s. Long before Django Unchained, there was a mini-revival of the western that largely started with the re-positioning of the 1980s Rat Pack in Young Guns (1988) and the postmodern revisionism of Unforgiven (1992) and Dances With Wolves (1990). This, along with Tarantino’s success, led to Hollywood’s reprisal of genre movies of the ’60s and ’70s and, arguably, leads us right up the point we’re at now with La La Land – a revival of the musical genre, starring musician John Legend among its supporting cast.

Maybe it’s labouring the point, somewhat, in arguing that this silly piece of largely forgettable indie cinema led to the contemporary success of Gosling and Stone, some twenty-four years later. But, perhaps, in the mid-80s heyday of high concept movies like Aliens, Top Gun, Crocodile Dundee and 9½ Weeks it’s easy to see why this silly movie about British musicians messing about pretending to be cowboys was overlooked by movie-goers and dismissed by critics. And also why, with today’s eyes, it’s possible to see something salvageable in it. 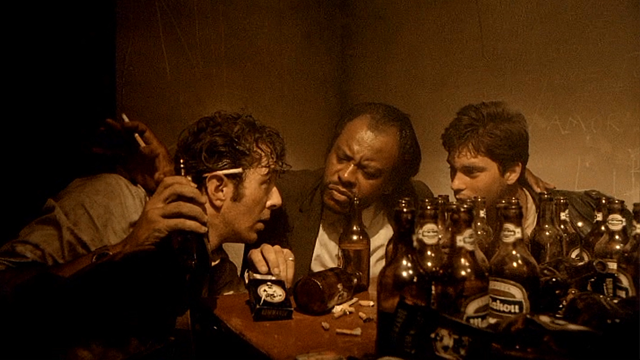 One might even argue that the movie’s greatest success is, actually, the semi-discovery of Courtney Love who is almost unrecognisable here from the woman who, within ten years, would marry the most famous musician in the world and become his widow, before becoming a rockstar in her own right and winding up back in a movie, achieving widespread acclaim for her role in The People vs. Larry Flynt.

Cox has since returned to Straight to Hell to rejig some of its scenes with improved sound and digital effects, releasing the newer version under the (somewhat deceptive) title Straight to Hell Returns. But, if you’re someone like me who rather enjoys the wonkier side of alternative or independent cinema, then then original still seems preferable. It’s a film about nobody losers and criminals, made by punks, weirdos and, seemingly, whoever else was hanging around: what more could you want?