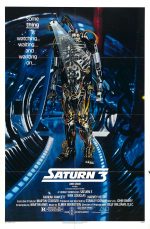 As you are no doubt aware, having found this particular website, in the late ’70s space was the shit. In the wake of Star Wars, numerous projects were green-lit, ranging from Ridley Scott’s franchise-launching Alien to the bottom-of-the-barrel Disney project The Black Hole. Saturn 3 was American-born, British TV supremo Lord Lew Grade’s attempt to cash in on the public’s new-found love of sci-fi. And, on the surface, its got a lot going for it. The cast includes an aging but still starry Kirk Douglas, the mainstream glamour of Farrah Fawcett and the ‘new Hollywood’ edge of Harvey Keitel. The movie’s director, Stanley Donen, was a doyen of Hollywood’s Golden Age, being responsible for some of its outstanding musicals, including Singin’ in the Rain. And, finally, the script was written by a young author who would go on to become one of Britain’s most lauded novelists: one Martin Amis.

It may be the benefit of hindsight but Amis’ influence on a story, originally written by Star Wars set designer John Barry, is pretty clear in this surprisingly violent and unhinged tale of sexual psychodramas betwixt man and machine. The author, who later became famous for his examination of ultimate evil in Time’s Arrow and the bourgeois apocalypse of London Fields, must certainly have played his part in ramping up the intensity of the demented Captain Benson’s (Keitel) pursuit of ingenue Alex (Fawcett) and his young bull/old bull rivalry with botanist Adam (Douglas). 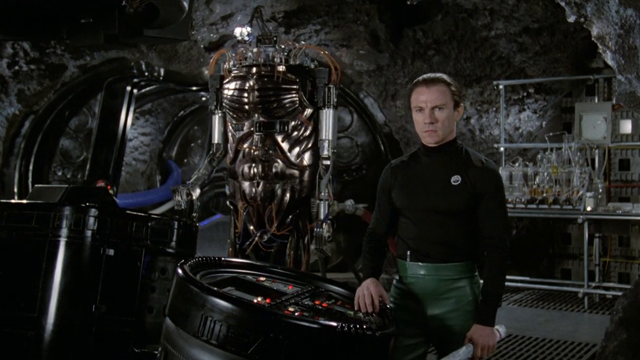 The plot plays out much as you might imagine, lifting elements of several sci-fi movies and Alien, in particular. Alex and Adam live an idyllic life on one of Saturn’s moons, as space-farmers, of a sort, engaged in cultivating plants to solve a now heavily-polluted Earth’s crippling food-shortages. Despite the seriousness of the situation, the two seem to be more concerned with flouncing around in beige gymwear or, in Fawcett’s case, an increasingly improbable series of nightdresses, than doing what they actually got sent to Saturn 3 to do. Trouble arrives in the shape of the disturbed Captain Benson – who has failed his psych evaluation, murdered his mission’s original pilot, and pops pills by the handful. When Benson constructs his robot understudy, Hector, the machine takes on several of his qualities, not least his seemingly relentless lust to “use” Alex’s body for pleasure. 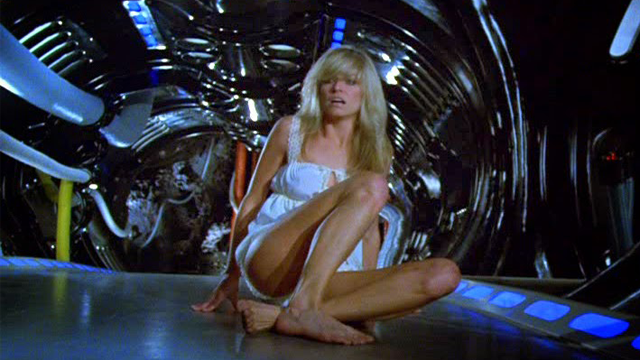 Impressively, the movie pulls no punches and is well-worthy of a 15 certificate (having been granted an ‘A’ by the BBFC on release). Within the opening five minutes, a man is chopped into pieces en route to being sucked into space and there is no shortage of blood as Hector goes on his rampage. Between these moments, however, the viewer is subjected to a series of near non sequitur lines, particularly from Keitel, often in an attempt to establish setting. Typical of the lesser sci-fi movies of the time, is an attempt to overload the script with invented jargon that now seems hopelessly outdated. Hector is, for example, ordered to ‘blank’, rather than ‘delete’ or ‘erase’ things from his memory, whilst Adam’s age means he knows he will shortly be facing ‘abort time’. Keitel’s interactions with robot Hector, especially, come across as particularly undercharged not least, as for the vast majority of the movie, Hector possess no head or voice, whilst Keitel’s lines were dubbed at a later date making him an especially wooden part of what should be a shiny tale of the future.

The movie exists now as a curio of its time. In the ’70s, Hollywood, and the lesser British film industry, was prepared to combine dystopian fiction and man v machine philosophising with the height of special effects, in an attempt to cover as many bases as possible and draw in both crowds and critics. In that way, then, Keitel’s militaristic space-pilot, with his no-nonsense attitude towards sex and ultra-efficient view of existence, seems to stand as a foreshadowing of the high-concept, big-budget action blockbusters that would ultimately dominate sci-fi from the mid-80s onwards. Douglas and Fawcett, meanwhile, serve as reminders of cinema’s technicolour past – something more earthy, more relatable but, in conclusion, usually more dull. 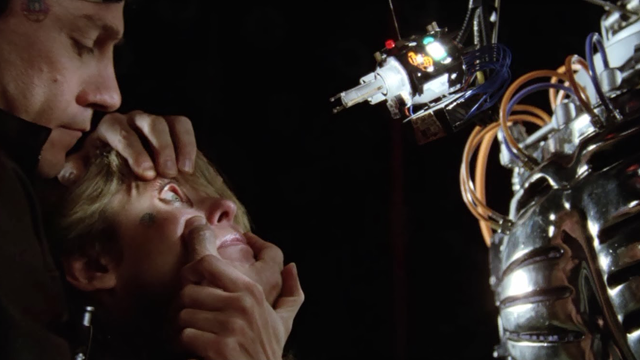 Its actually a shame, in a great number of ways, that Hector is such an underseen character, given he is an impressive beast of a robot. His metallic exoskeleton and exterior blue and red tubing evoke the early days of anatomy, whilst his flexible fingers, perfectly imitating Keitel’s remote control in a sort of psychosexual Sorcerer’s Apprentice moment, preempt Luke Skywalker’s mechanical hand in Empire Strikes Back. His crowning glory comes, ultimately, during the one scene in which he is given a face – however, as this is the only scene of any real note, I won’t spoil it for you.

It’s one to watch, if you’re interested in seeing old-school actors in preposterous sci-fi scenarios but, as its lack of even cult status will attest, this isn’t even really one for the die-hards. Amis and Donen’s involvement does add a certain cine-literate curiosity but this is far from the best work of either party. The movie was nominated for three Razzies after its release but it wasn’t even quite bad enough to win one – in fact, the final score was more like Saturn 3: nil.