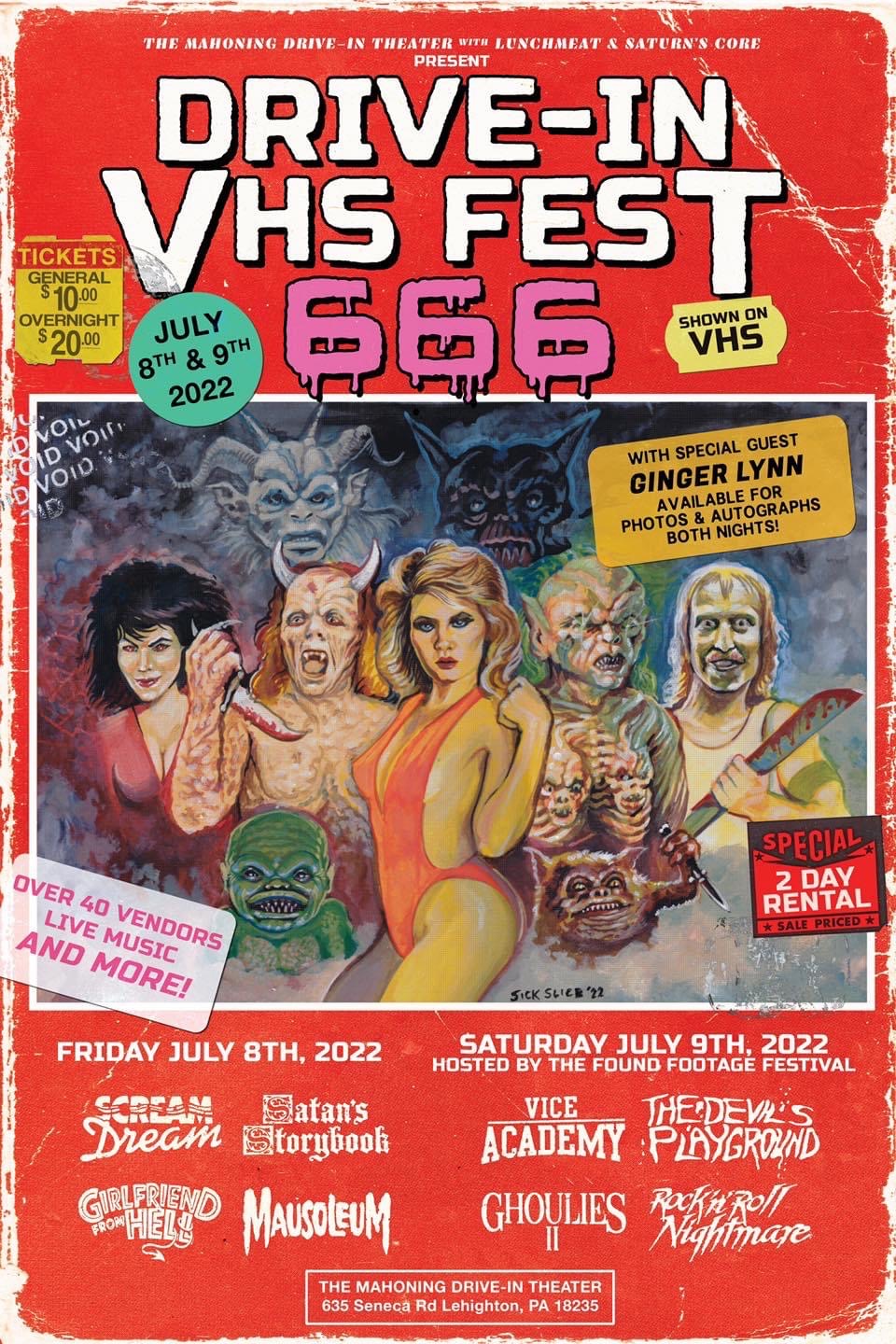 Get ready to clean your heads and jump in the rewinder: it’s time for Drive-In VHS FEST 666, cueing up a stack of scorchingly sinister slabs of malevolent mayhem for your drive-in damnation!

Rev up for a radical rewind as Lunchmeat and Saturn’s Core Audio & Video join forces with The Mahoning Drive-in Theater for the most VHxcellent weekend of helical scan sensations in the world, a gathering of tapeheads and analog animals for two days of video store classics on the giant outdoor screen, played from vintage VHS tapes!

Arrive early for a superstore of eclectic VHS, analog media and collectibles vendors – including Witter Entertainment and Broke Horror Fan slinging some of their most desired titles, many of which are not currently available online or near out of print – and Ginger Lynn in person, selling autographs and photos! 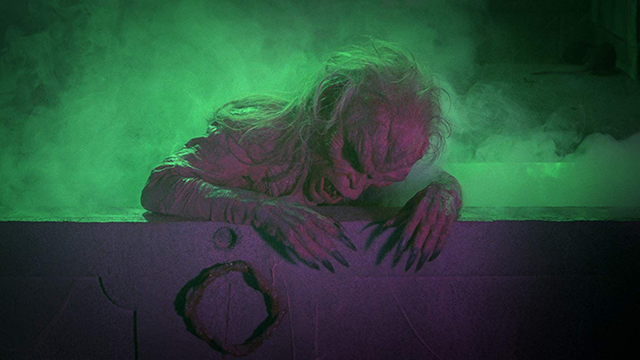 Drive-In VHS FEST 666 fire up the VCR on Friday (8 July) and slip into a Scream Dream (1989), wherein witchcraft wreaks bloody revenge upon raucous rollers and metal maniacs! Then eject for intermission and pop in the satanically saucy Girlfriend from Hell (1989), a high school lass who’s filled with demonic sass!

While Drive-In VHS FEST 666 rewind the tape, a short intermission will follow before we insert the night’s third feature, a duo of deadtime tales to help ensure a restless sleep, Satan’s Storybook (1989), featuring our guest of honor, Ginger Lynn! The night concludes with a trip to the Mausoleum (1983), a terrifying tape delving into the demented depths of demonic diddlery, resulting in rampant repulsive retribution! 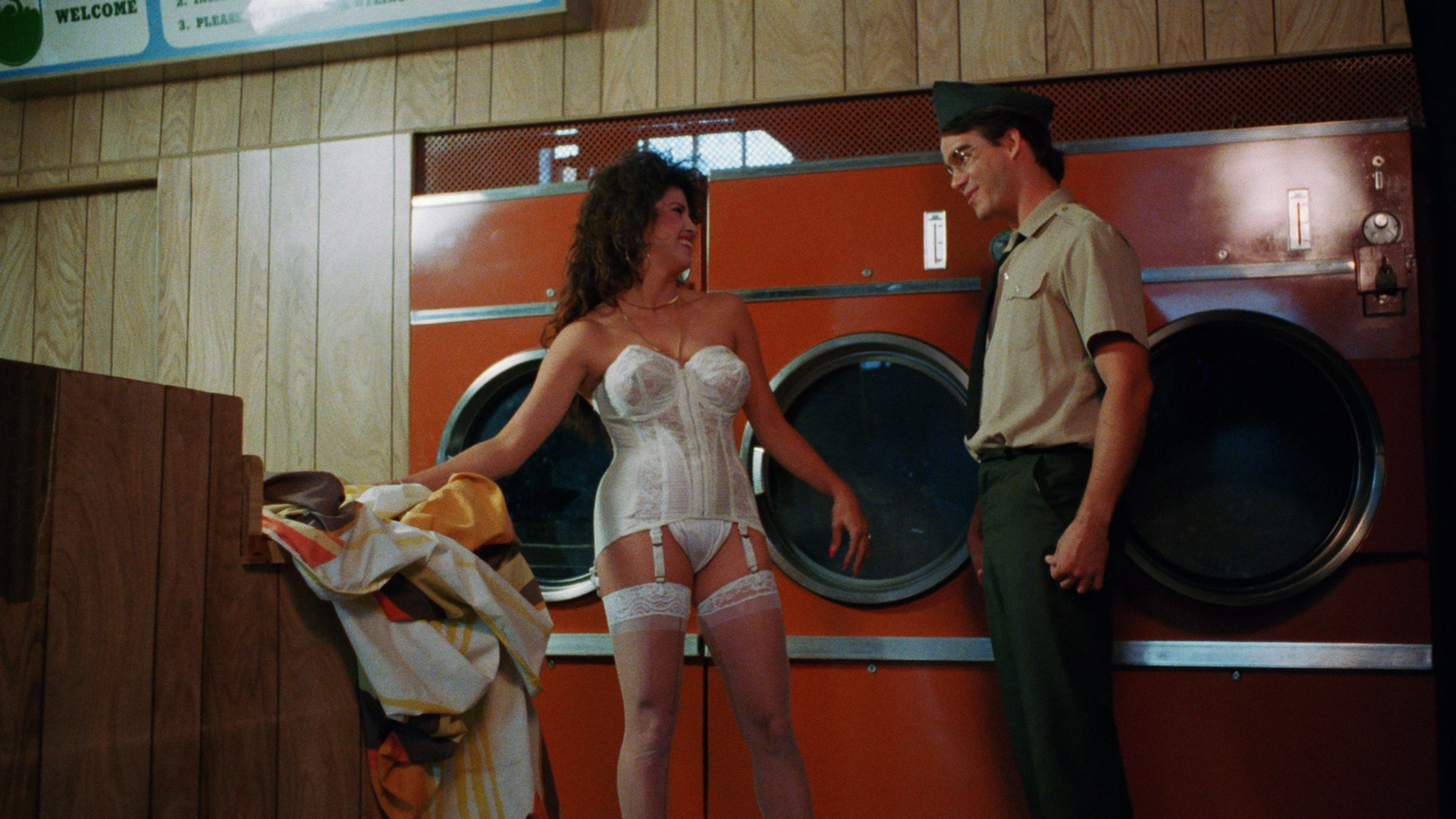 Saturday night (9 July) begins when you’re enrolled in the Vice Academy (1989), going undercover with Ginger Lynn, to clean up the streets of L.A.! After a quick tape swap, prepare for a bash to the 4-head, as you ride the macabre merry-go-round of The Devil’s Playground (1989) for some deep-dish demonic delights! With the next slab pulled from the stack, let’s continue with the comedic creepy crawly creature carnage of Ghoulies II (1987), wherein the demonic little louts let loose at a soon-to-be-filled-with-a-lot-less amusement park!

As Drive-In VHS FEST 666 give the racecar rewinder one last workout, our final flick of the night is the legendary Canadian heavy metal horror Rock ‘n’ Roll Nightmare (1987), in which living He-Man rocker Jon Mikl Thor takes on the devil with the power of ROCK! As an extra-special treat, Saturday night’s features will be hosted by those dark masters of ceremonies, Joe Pickett and Nick Prueher of The Found Footage Festival, presenting a diabolical deluge of satanic-themed video clips before each film!

It’s a 2-day rental not to be missed! Be kind and join your fellow cassette cadets on a trip to hell and back on VHS, at The Mahoning Drive-in Theater in Lehighton Pennsylvania! No late fees, no membership required! For more information, please visit mahoningdit.com