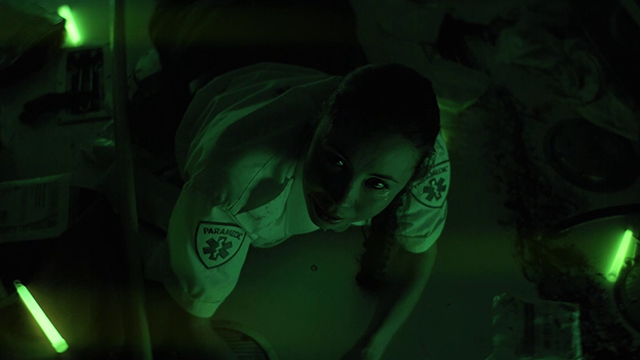 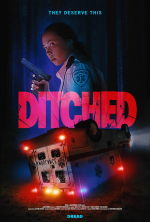 Storyboard artist Christopher Donaldson is no stranger to the horror genre, having worked on the Child’s Play remake, Come to Daddy, The Order, and Chilling Adventures of Sabrina (review). After his directional work on the television series Necessary Evil, it was inevitable that the Canadian-raised filmmaker would direct his first feature, and boy does Ditched delivers. That is not to say that Donaldson’s suspense thriller is not without its faults, but Ditched certainly succeeds as a highly enjoyable, horrifically gory cat-and-mouse romp, with just enough blood splatter to make Sam Raimi blush.

Awakening in the back of an overturned ambulance, first responder Melina (Marika Sila) struggles to remember why she now finds herself in a ditch. Confused and likely concussed, she is aided by the soft-spoken Franson (Kris Loranger). Convincing Melina to release him from the gurney he is tied down to so they can find help, his demeanor quickly changes when she unstraps one of his arms. Fortunately, Officer Revesz (J. Lindsay Robinson) arrives just in time to prevent Franson from choking her to death!

Revesz reveals to Melina that they were forced off the road during a routine prison transfer; losing control after the ambulance and escorting police interceptor’s tyres blow out. Franson is one of two prisoners; the other is a rapist nicknamed “Sideburns” (Reamonn Joshee) who is out there in the forest somewhere… Somebody wanted them in this ditch 100 feet below, but why? Whilst Melina attends to her injured colleagues – Aidan (Lee Lopez), Jake (Declan O’Reilly), and Kerr (Lara Taillon) – Revesz sets out to determine the cause of the “accident”.

Taking inspiration from many masters of horror, such as John Carpenter, Fred Dekker, Joe Dante, and the aforementioned Sam Raimi, Donaldson evokes nostalgia for the late 1970s/early 80s era of independent horror cinema. Think 42nd Street in the New York City borough of Manhattan during the 70s. Ditched wouldn’t have appeared out of place on the marquee of one of their many grindhouse movie theaters; a double feature alongside Assault on Precinct 13. And imagine if Ditched had it been released in the UK in the 80s; banned from VHS distribution as a video nasty. It’s exploitative, it’s grotesque, and it’s a lot of fun!

You see, Ditched is at its strongest when it leans heavily into paint by numbers revenge and 80s slasher tropes; its introduction as a police procedural devolving into vigilante violence until only the final girl remains (and not how you might expect). Shot in Edmonton, Ditched features a diverse cast of Canadian actors, well-suited to Christopher Donaldson’s character-driven, if slightly underdeveloped script. And whilst character motivations are often cliche, the cast appears to be having a blast in their respective roles; particularly Inuit-American actress Marika Sila, and veteran Mackenzie Gray as the sympathetic anti-villain.

Absorbed in Wes Miron’s artistic cinematography – a diverse array of garish green, blue, yellow, and red light, evoking Creepshow vibes – and Clayton Worbeck’s dynamic retrowave soundtrack, unsuspecting audiences will perhaps be shocked to see Ditched introduce themes of morality amongst decapitations, eviscerations, and bodily dismemberment; twisting our perception of good versus bad, and entering that grey area where everything isn’t so black and white.

“Tonight, each one of you is going to die, because… you deserve it.”

Ditched delivers stomach-churning exploitation whilst flirting thematically with social-horror, but it is the classic “fuck you” ending that will linger with you long after the closing credits; feeling like a .44 caliber projectile piercing your brain. Christopher Donaldson’s underlying message on vigilantism may get lost in the crossfire, but if you are still reading this, it’s because you’re here to lap up the bloodshed. And for gorehounds, Ditched doesn’t disappoint.

Ditched is available now on VOD, and Blu-ray 15th February, from Epic Pictures and DREAD.