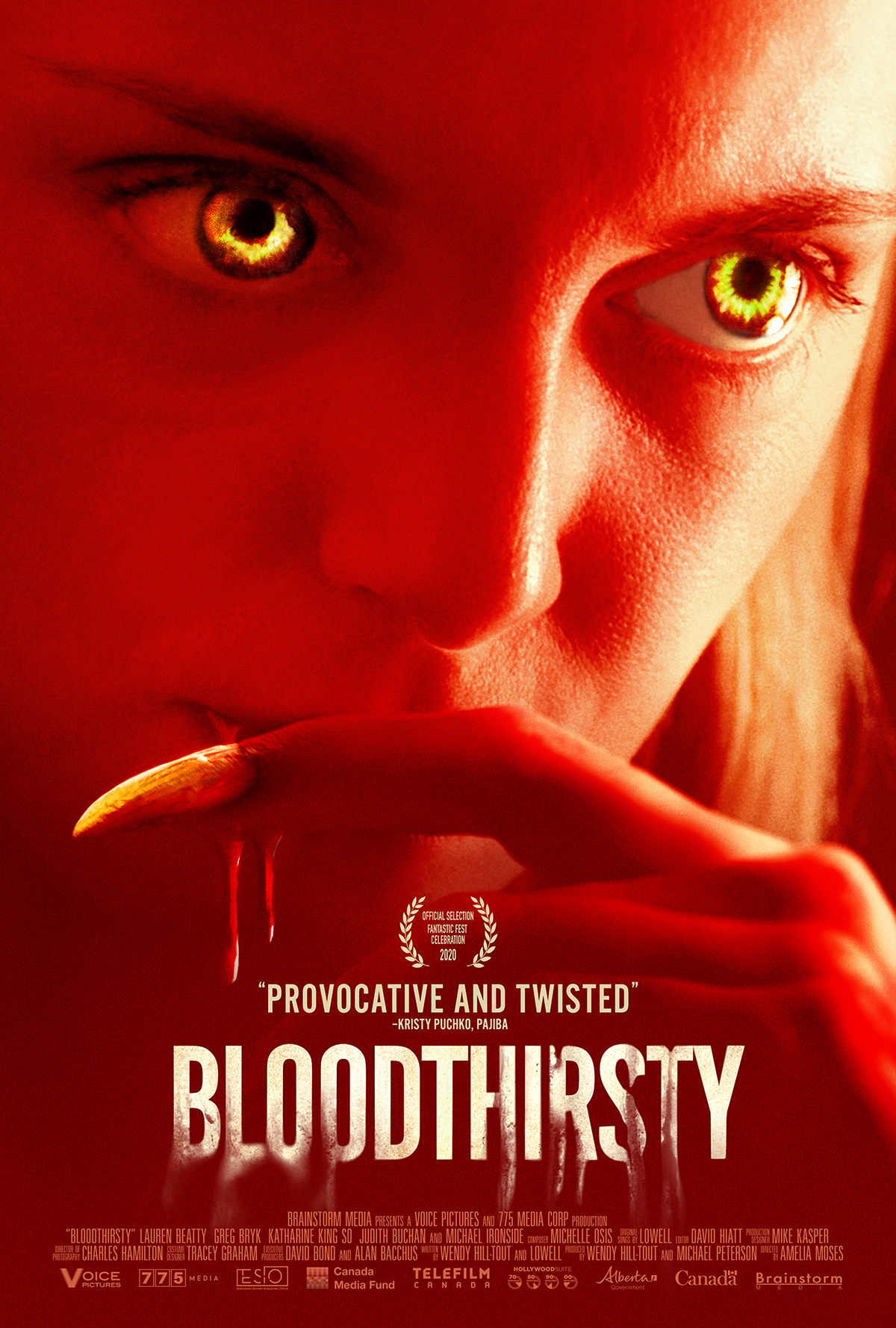 Directed by Amelia Moses (Bleed With Me), conceived and written by mother-daughter duo Wendy Hill-Tout and singer-songwriter Lowell, and featuring the original music of Lowell, Bloodthirsty stars Lauren Beatty (Bleed With Me) and Greg Bryk (The Handmaid’s Tale), with Katharine King So in her feature film debut, and veteran actor Michael Ironside.

Grey, an indie singer, whose first album was a smash hit, gets an invitation to work with notorious music producer Vaughn Daniels at his remote studio in the woods. Together with her girlfriend/lover Charlie, they arrive at his mansion, and the work begins. But Grey is having visions that she is a wolf, and as her work with the emotionally demanding Vaughn deepens, the vegan singer begins to hunger for meat and the hunt. As Grey starts to transform into a werewolf, she begins to find out who she really is, and begins to discover the family she never knew. What will it take to become a great artist and at what cost to her humanity?

Los Angeles/Toronto based singer-songwriter Lowell has had a unique journey from dropping out of college and working as a stripper to finding her footing as the go-to songwriter for platinum selling pop stars (Madison Beer, Hailee Steinfeld, JoJo, Demi Lovato, Lennon Stella, Charlie Puth, Bülow) and earning double platinum / gold certified plaques. Continuing her multidisciplinary trajectory, Lowell co-wrote Bloodthirsty, a horror feature film available on-demand now in the U.S. via Brainstorm Media and in Canada via Raven Banner. The film follows a young indie singer who finds herself turning into a werewolf under the pressure of recording her anticipated second album. In addition to being written by the mother-daughter duo of producer Wendy Hill-Tout and singer-songwriter Lowell, the all-women creative team includes director Amelia Moses, lead actor Lauren Beatty, and composer Michelle Osis. 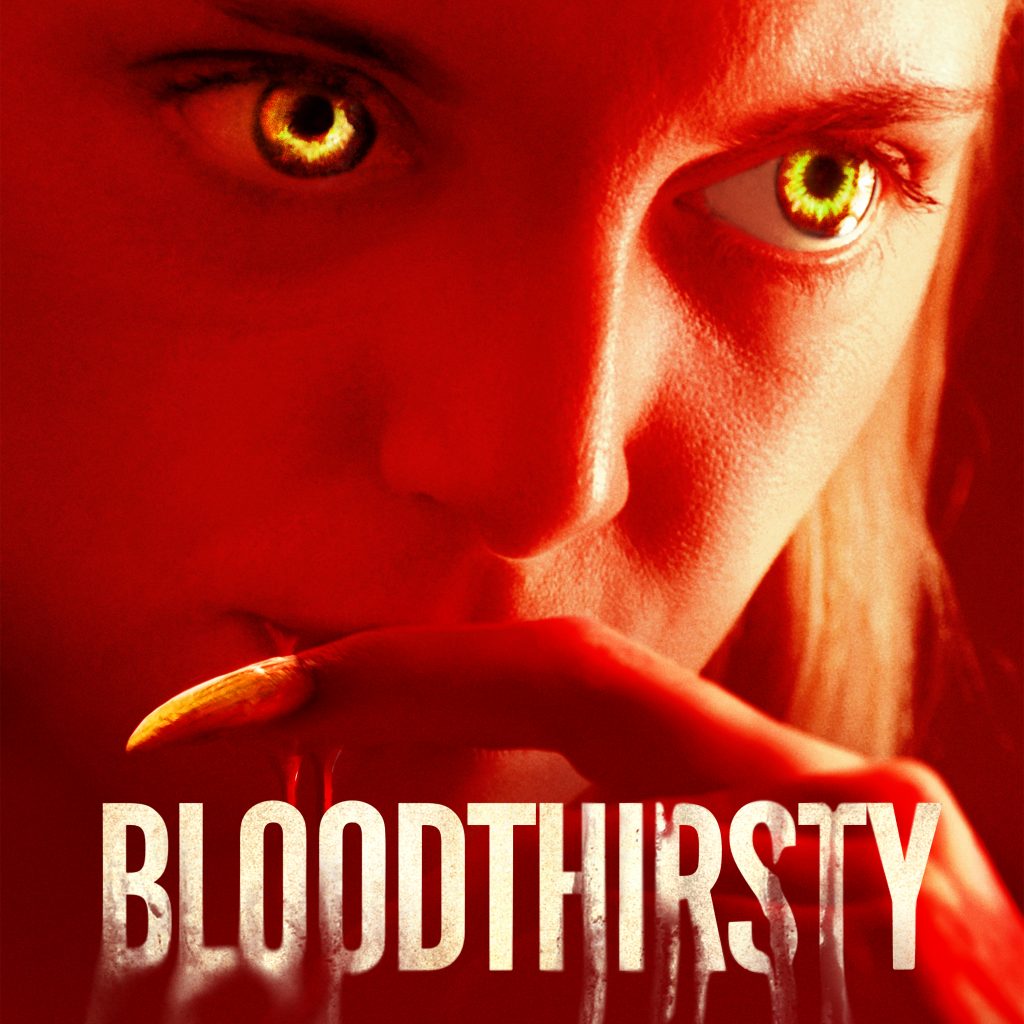 Lowell recently revealed new single “Bloodthirsty”, taken from a four-song collection of Lowell’s music featured in the film. Titled Bloodthirsty (Music from the Motion Picture), the EP was also released alongside the film and is available now. The scuzzy, guitar drenched track maintains the film’s theme of creating art and the toll the creative process can take on one’s well being. She sings, “I get the creeps with everyone’s eyes on me, bloodthirsty”, describing both outside and internal pressures of being an artist and how consuming the work can be. The track received a Canadian Screen Award nomination for “Best Original Song”. Lowell reveals:

“The single from the film is a 90s influenced grungy little tune that I wrote specifically with the movie in mind. Cinematically, we heavily referenced 90s classics like Buffy the Vampire Slayer and Bram Stoker’s Dracula. The music needed to feel both nostalgic and contemporary at the same time so I did my best to capture the chords and essence of 90s grunge while still maintaining the lyrical intimacy of modern times.”

“The 90s references also went along well with the feminist, LGBTQ positive undertones of the film. I grew up on Riot Grrl and Courtney Love and have always admired their willingness to be raucous and speak out, so it felt sonically suitable for a queer positive film made by a bunch of bad ass women.”

Bloodthirsty was accepted into Frontieres at Cannes, Telluride, Blood in the Snow, and premiered at Fantastic Fest in Austin TX (the US’s biggest genre fest). Viewers in Canada can watch the film on iTunes, Rogers, Telus, Shaw, Cineplex, Bell, Vimeo and in the United States via Apple TV, Amazon, Fandango Now, Google Play, Vudu, Comcast, DirecTV, Verizon Fios, Spectrum, and anywhere else you can rent and buy movies. Bloodthirsty (Music from the Motion Picture) is also available via Arts & Crafts to stream/download from various digital music stores.