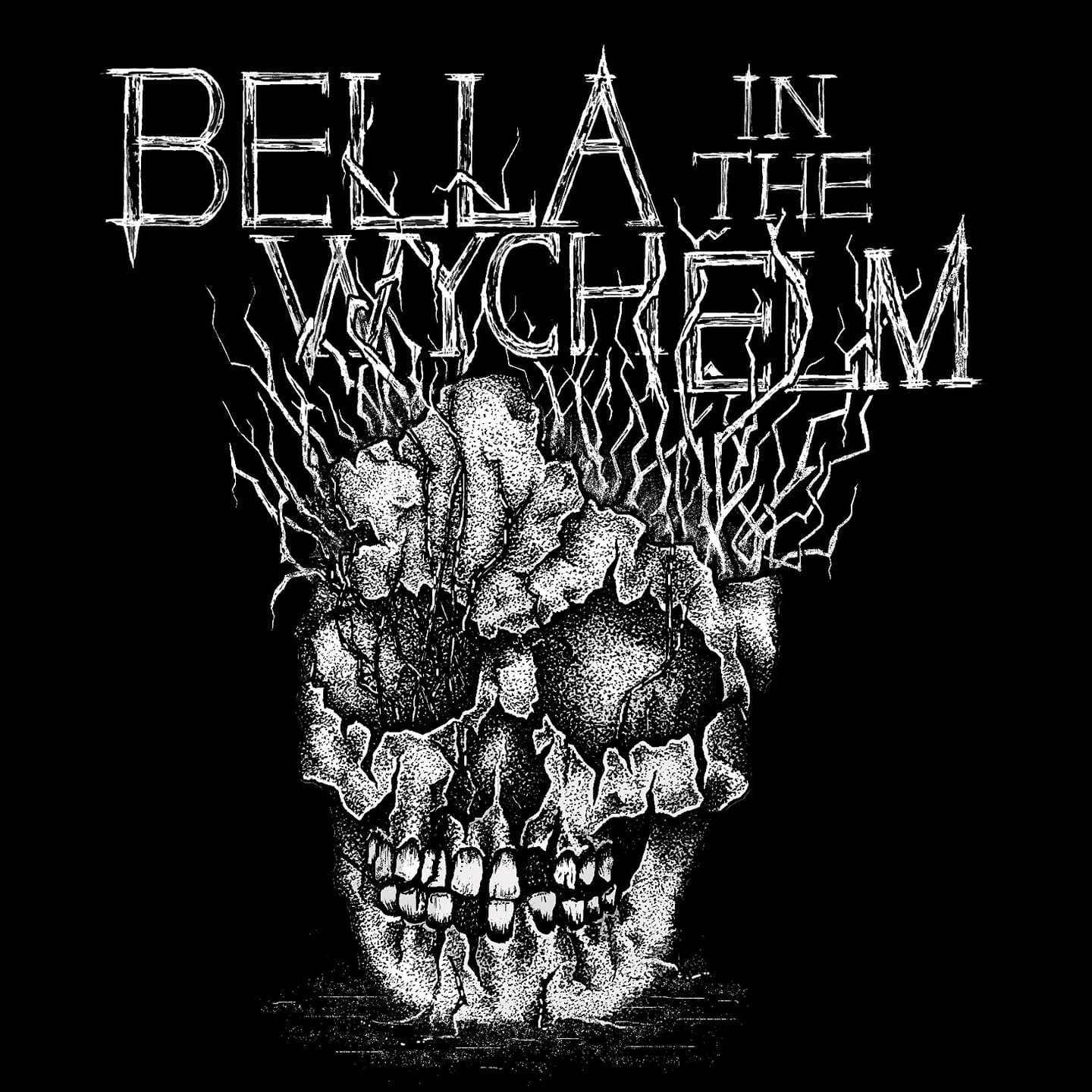 Bella in the Wych Elm (2017) | Directed by Thomas Lee Rutter

Remastered onto BD-R/DVD-R, Carnie Features have released the definitive edition of Thomas Lee Rutter’s Bella in the Wych Elm; a West Midlands phantasmagoria based on the world-famous unsolved Hagley Wood mystery. In 1943, four local boys were poaching bird nests in these woods, situated in the English village of Hagley, Worcestershire, when they stumbled upon a large wych elm (ulmus glabra). Climbing the tree in the hopes of finding another nest, one of the boys discovered what appeared to be an animal skull. However, upon closer inspection, the lads quickly realised that they had found human remains in the hollow trunk…

Knowing they were on the property illegally – Hagley Wood is part of the Hagley Hall estate – they agreed to leave the skull where they found it and not inform anyone of their macabre discovery; to avoid getting into trouble. However, that grim sight played uneasily on the mind of the youngest of the boys, and eventually, he confided in his parents. Within the wych elm, police discovered the skeletonised remains along with one shoe, fragments of her clothing, and a wedding ring. Further remains of a severed hand were also discovered some distance from the tree. 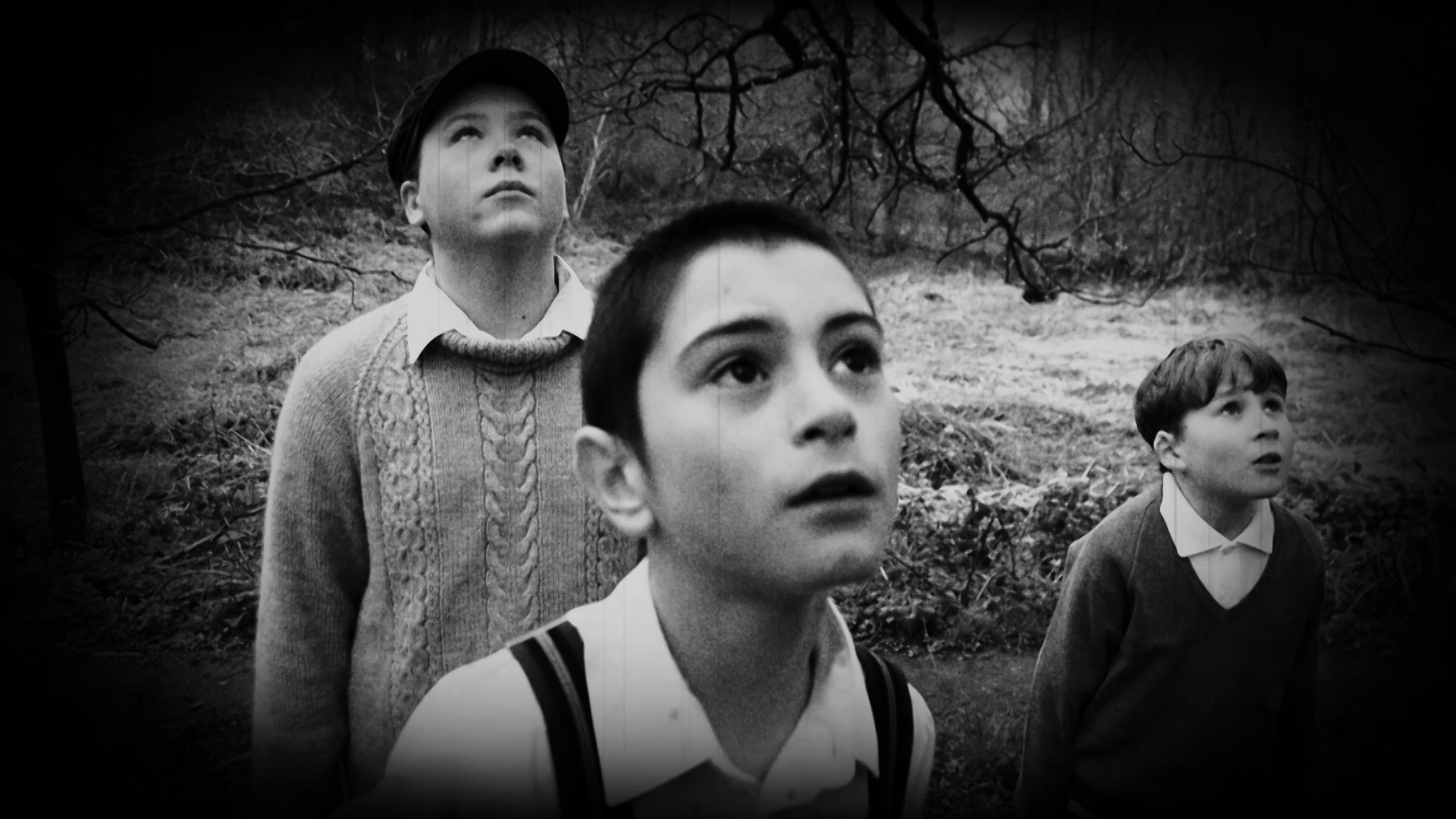 A forensic examination of the tufts of hair and remaining teeth helped to establish that the remains were those of a female, aged 35 at the time of her death (late 1941). Clothing was also found in her mouth, suggesting asphyxiation, and the measurement of the wych elm trunk confirmed that the body had been placed there prior to rigor mortis setting in. Therefore she was murdered not too far from where the remains were discovered. Unfortunately, England was still enduring the Second World War, and thus, despite a nationwide police investigation, reports of missing people reports proved too vast for an identification to be confirmed. As time passed the grisly discovery was quickly forgotten… until 1944, when graffiti appeared in Birmingham that read:

“Who put Bella down the Wych Elm – Hagley Wood”

This was the first time a name had been mentioned and led to wild speculation. Who was “Bella” and why was she left in Hagley Wood? Could she be a missing Birmingham prostitute, or perhaps she was the lover of Josef Jakobs, a German spy executed at the Tower of London? Was she last seen drinking with two gentlemen at the Lyttelton Arms in Hagley, who later left her in the wych elm, or was she the victim of witchcraft; her severed limb, a Hand of Glory? 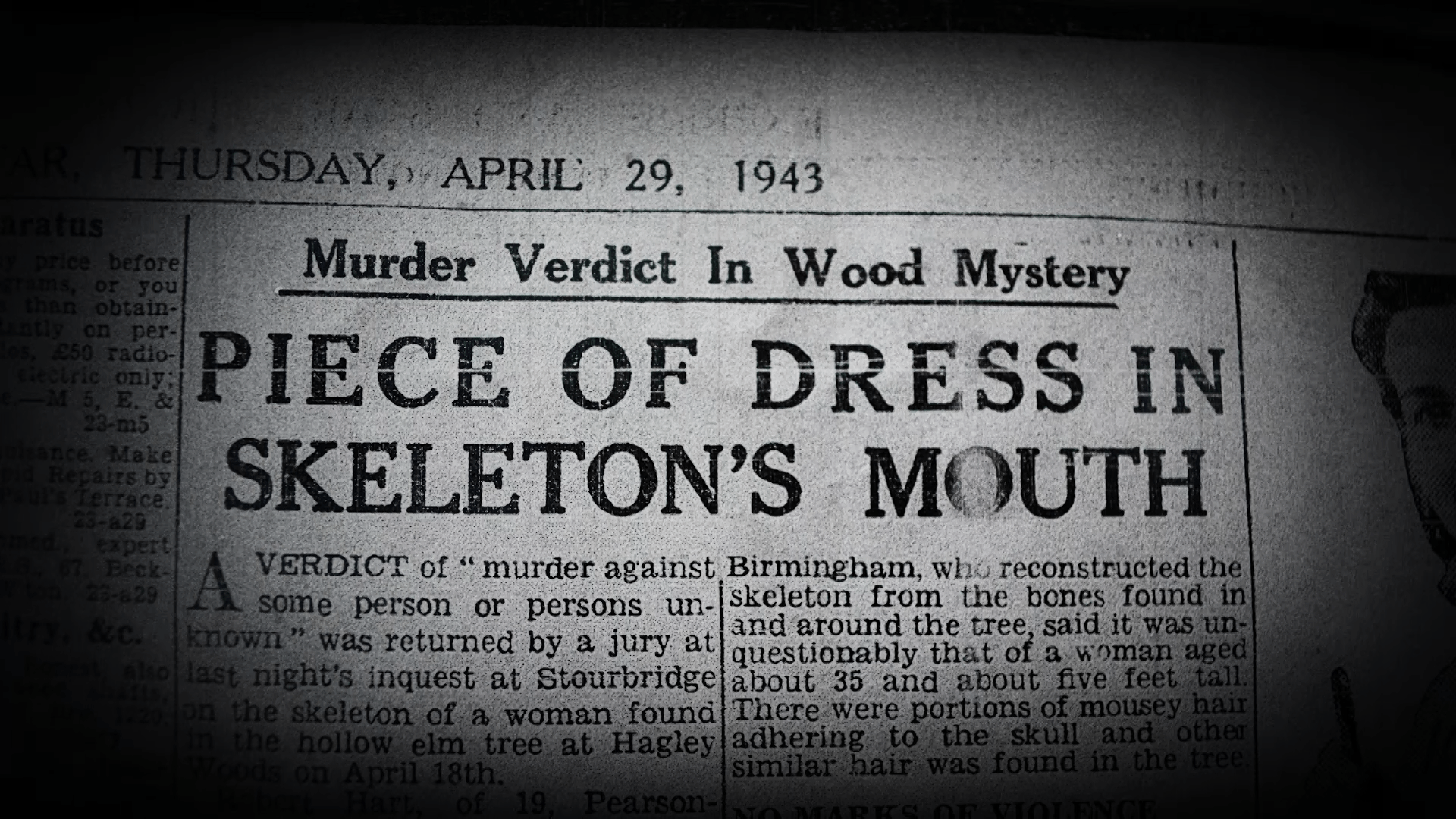 Throughout the Black Country, similar graffiti has appeared – most frequently during the 1970s on the Hagley Obelisk, a monument that can be found not too far from Hagley Wood – placing this WWII-era mystery into the lexicon of modern folklore; a tale to tell your children or grandchildren when they too ask the question… “Who put Bella in the Wych Elm?”

Narrated in a rich Black Country accent by ‘Tatty’ Dave Jones, this compelling, award-winning docu-horror mesmerised me in how the story was conveyed. Jones discusses the many theories of “Bella” like a friend you have just met at the pub, or a family member bestowing their “knowledge” in a matter-of-fact manner. The Hagley Wood mystery is elevated further by the visual language director Tom Lee Rutter bestows upon his audience, captivating us with a poetic documentarian style that clearly hearkens back to the silent-era of cinema. Presented in dusty monochrome, and overlaid with an over-exposed, flickering vignette to embellish its chilling tone, Bella in the Wych Elm evokes the style of German expressionists like Fritz Lang. 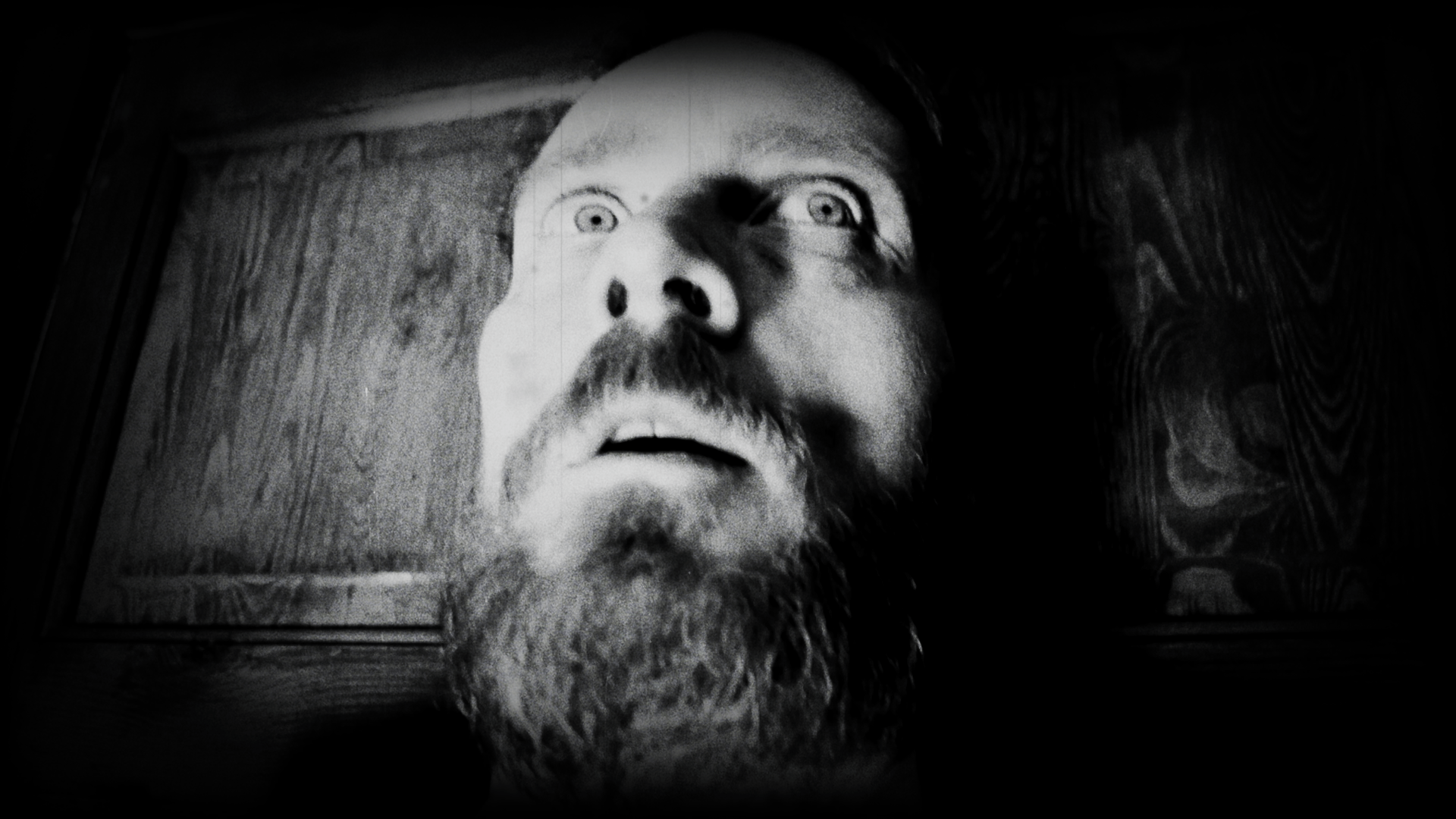 Carnie Features’ recent Blu-ray release was a chance for Tom Lee Rutter to revisit the film and refine his edit. With a running time of just 34 minutes, Bella in the Wych Elm is accompanied by three alternatives versions; each stripped of Dave Jones’ narration, interspersed with intertitles, and offering an alternative score from Deathly Pale Party, Craigus Barry, and Simon Fox. Liner notes from Rutter provide additional context to the Black Country mystery, and insight into the docu-horror’s production and legacy; for example, a copy of Bella in the Wych Elm currently resides in the library of The Museum of Witchcraft and Magic in Bocastle, Cornwall. 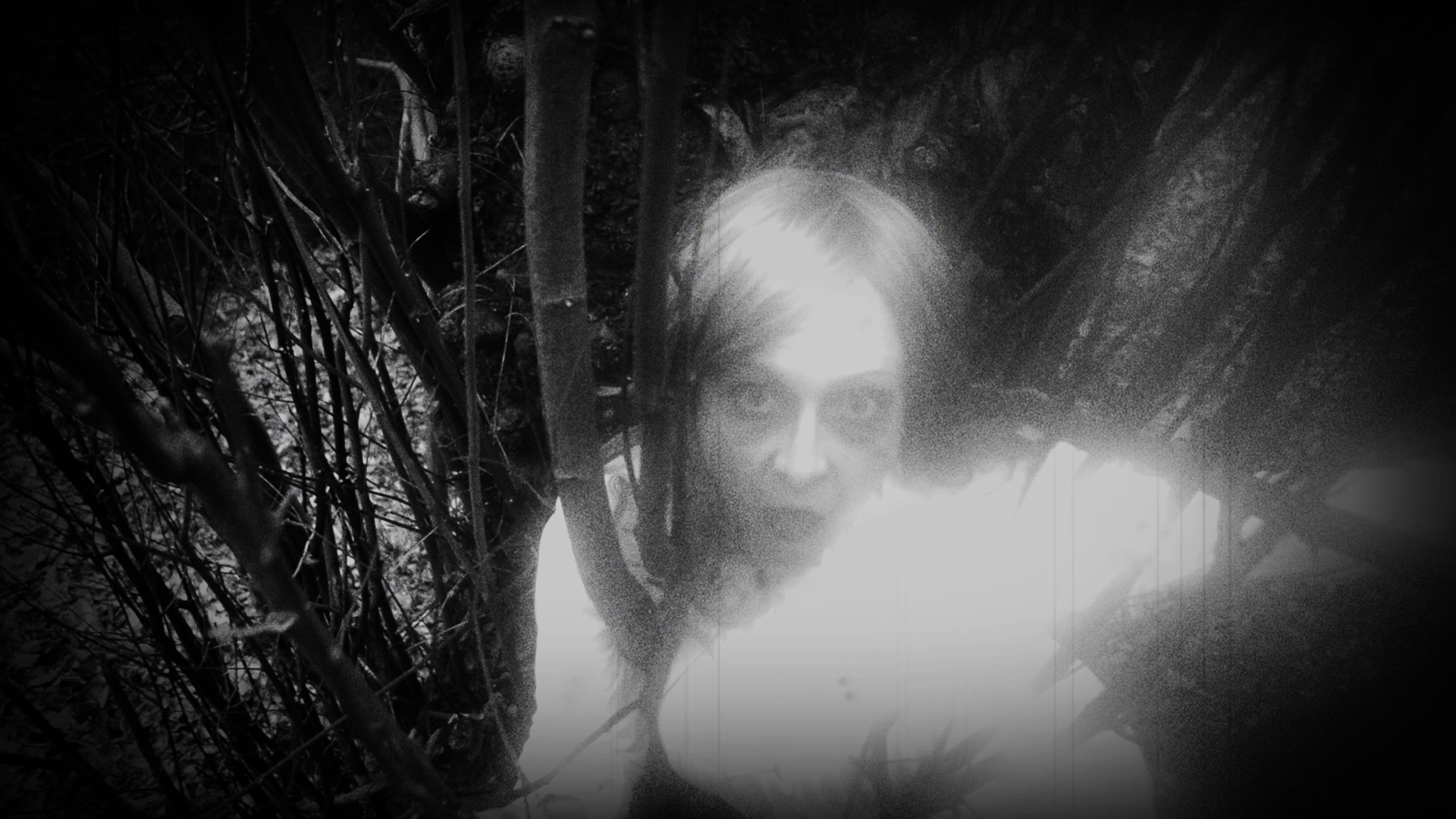 Finally, a special “Bella” episode of the 1970s TV show, The Midnight Hour with Dr. Balden Cross is also included (in reality, a faux episode spin-off from David Pearl and Tom Lee Rutter’s mockumentary, Dr. Balden Cross: Beyond the Void), along with newly commissioned artwork from Sludgework.

Part documentary, part experimental horror, Bella in the Wych Elm is a delight to watch and never comes across as exploitative. Instead, Tom Lee Rutter’s film respectfully acknowledges that the mystery surrounding her death, and her lack of identity, is the reason why “Bella” has become this gut-churningly esoteric tale that has haunted children and hypnotised adults for decades. Somebody knew… but who?

Bella in the Wych Elm is available now on Dual Format Blu-ray/DVD from carniefeatures.bigcartel.com