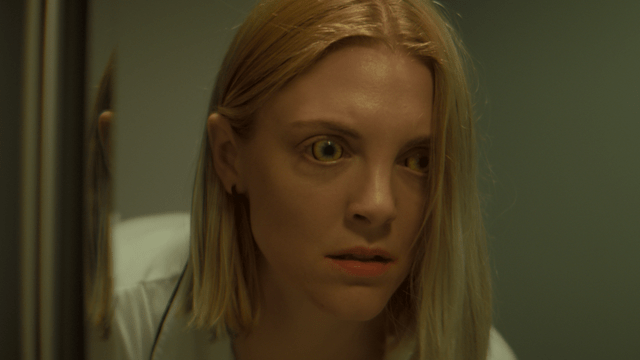 Brainstorm Media has acquired USA rights to the female-driven and directed werewolf thriller Bloodthirsty which had its world premiere as the closing night film at the virtual Fantastic Fest Celebration 2020. Directed by Amelia Moses (Bleed With Me), conceived and written by mother-daughter duo Wendy Hill-Tout and singer-songwriter Lowell, and featuring the original music of Lowell, Bloodthirsty stars Lauren Beatty (Bleed With Me) and Greg Bryk (The Handmaid’s Tale) with Katharine King So in her feature film debut and veteran actor Michael Ironside.

In Bloodthirsty, vegan singer-songwriter Grey (Lauren Beatty) goes to work on her second album with notorious music producer Vaughn Daniels (Greg Bryk). But as the album progresses, she starts to transform into a powerful beast with a thirst for blood, meat and the hunt. Michelle Shwarzstein, Brainstorm Media’s Vice President of Marketing and Acquisitions says:

“We can’t wait to share this fantastically twisted werewolf horror film with audiences nationwide. Led by an amazingly talented female filmmaking team, this movie will not fail to surprise and delight.”

Bloodthirsty is produced by Wendy Hill-Tout and Michael Peterson. It is executive produced by David Bond and Alan Bacchus. The deal was negotiated by Michelle Shwarzstein and Steve Break on behalf of Brainstorm Media and Pip Ngo of XYZ Films on behalf of the filmmakers. Brainstorm Media is set to release Bloodthirsty in theaters and VOD on 23rd April.