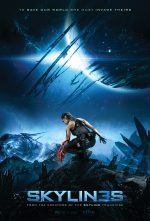 When Liam O’Donnell co-wrote Skyline (2010), directed by The Brothers Strause, the story planted a seed for a franchise that was unwarranted. Unfortunately, Skyline was unjustly torn apart by audiences upon its theatrical release. It felt restrained. That is until the ‘brain-sucking’ final act! Skyline was a b-movie pretending to be a mainstream science-fiction thriller.

O’Donnell knew he had unfinished business, so when the opportunity presented itself to write and direct the sequel, he embraced the mythos of this world and took it beyond all expectations! (pun intended!) Beyond Skyline (2017) was the sequel no one expected; a genre hybrid that tonally felt like Predator and Die Hard had been spliced together. And yet, it worked because it was so wild! It was inevitable that a trilogy would soon evolve.

Years have passed since the Earth’s skyline hypnotized humanity with its other-worldly blue light; an alien race descending from the skies to steal our brains! For those that were unfortunate to look directly into the light, they became bio-mechanical killer extraterrestrials known as ‘Pilots’. Fortunately, humanity was able to survive! Forming a resistance, skyline survivors fought off the alien invasion; re-engineering their enemies biology so their humanity could be restored. Now the ravaged Earth’s survival depends on the peaceful coexistence of the human race and extraterrestrial ticking time-bombs…

You see, the ‘Pilots’ have been infected with an emerging virus that, without action, will revert these other-worldly creatures to their unstoppable, human-hunting form. To save the Earth, resistance commander General Radford (Alexander Siddig) must enlist the services of human-alien hybrid Captain Rose Corley (Lindsey Morgan); a living legend whose unique DNA saved the human race from extinction. Along with a team of elite soldiers, Rose must travel beyond the far reaches of space, to the alien planet known as Cobalt 1. This time, to save our world, she must invade theirs.

Like its predecessor, Skylin3s leans heavily into its influences without becoming an imitation. This third sequel takes an Aliens-esque action-adventure approach – substituting Ripley and the Colonial Marine’s expedition of LV-426, with Rose and the Resistance’s expedition of Cobalt 1. It also retains the martial-arts-infused mayhem of Beyond Skyline, introducing a new international team of badasses into the fray.

Reprising her role as Captain Rose Corley, Lindsey Morgan leads with the same confidence often exhibited by 1980s era action stars; easily carrying the weight of Skylin3s on her shoulders. She is one part Sigourney Weaver; one part Jean-Claude Van Damme. By applying all the experience she has gathered from her role as the incredibly strong but vulnerable mechanic Raven Reyes in The 100, Morgan portrays Rose as a larger-than-life superhero; tough as nails, but emotionally invested in her mission and caring of her team.

“I know what is at stake, and I’m not afraid to die for it!”

Daniel Bernhardt’s intimidating presence (at almost 6’3!) also captures the essence of 90s DTV action fare. Here Bernhardt portrays elite soldier Owens as cold and callous, leaving the audience suspicious of his motivations. Jonathan Howard however, portrays Leon with more warmth; the chemistry he shares with Lindsey Morgan and the levity he inserts into key scenes makes it all the more surprising when Leon’s true intentions become clear. Liam O’Donnell knows exactly how to play around with our expectations.

The entire cast is a blast to watch – from Rhona Mitra to James Cosmo, Ieva Andrejevaite to Cha-Lee Yoon, and Samantha Jean to Yayan Ruhian – but it is Alexander Siddig’s exposition-heavy role as General Radford that really pulls the audience in. Without Siddig completely grounding Skylin3s during the first act, would we have been able to suspend our disbelief during Ruhian’s return to silat-infused violence as a human-alien hybrid?

Skylin3s is also visually beautiful; a space opera emphasizing complex set pieces normally reserved for summer blockbusters. Cinematographer Alain Duplantier frames each shot with absolute precision, complementing not only the actors but also the creature design; the SFX and VFX building a world that we want to inhabit for the duration of its running time. The visual aesthetic of the Skyline trilogy is clearly a labour of love.

Closing FrightFest, Skylin3s is deserving of all the praise it has received since the world premiere screening. Liam O’Donnell wears his influences on his sleeve and is genuinely passionate about genre movies. He creates the type of films I want to watch: energetic, plot-driven genre hybrids with a take-no-prisoners sort of attitude. Just like Beyond Skyline before it, Skylin3s is an experience; an epic conclusion to a trilogy that deserves further recognition.