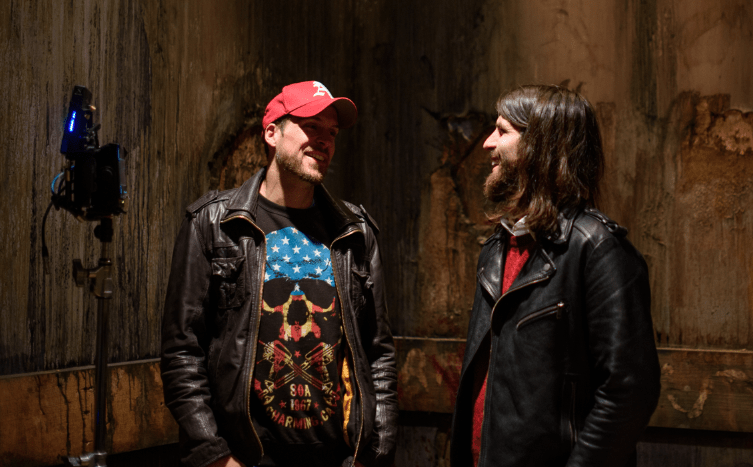 If you are looking for a scary movie to watch All Hallows’ Eve, may I suggest The Dare? You may, however, want to look away during the inventive torture sequences that Director Giles Alderson and co-writer Jonny Grant have concocted! The Dare succeeds in shocking its audience with grisly, grotesque imagery, and Giles has been kind enough to answer a few questions about his horror debut for Attack from Planet B.

Ken Wynne: Thank you for taking the time to answer a few questions Giles. It really is appreciated.

Ken: Let us begin with the origins of The Dare. When did the idea occur to you and co-writer Jonny Grant to create a horror film, and was it intentional to follow a style similar to the mid-2000s resurgence of splatter; Saw (2004) and Hostel (2005) for example?

Giles: Another film project I had on the go at the time was falling apart and I remember wanting to go back to basics and make something simple. Little did I know it would turn out to be a big studio movie and take up six years of my life. But then, what I’ve learned hosting The Filmmakers Podcast and talking to so many filmmakers is that most films can and do take that long!

With The Dare I originally had two ideas I put together and wrote a treatment/scriptment, which I then took to Jonny Grant to write it with me and within a month we had our first draft. I love writing with other people. It’s easier for my constantly active brain so I have two, theirs and mine. Now I feel confident within those parameters to get a project written. I’d recommend it to any writer. It’s so easy to get bogged down and lonely which means perhaps you never finish it on your own but with a partner, they are always there to gee you up and help you get to the end and vice versa.

We never wanted to make a splatter film, we wanted to make something that appealed to fans of the genre but had a psychological story. A dark rooted horror was always our aim. Something that gets under the skin (quite literally) and makes you think about consequences and actions not just in your past but now. 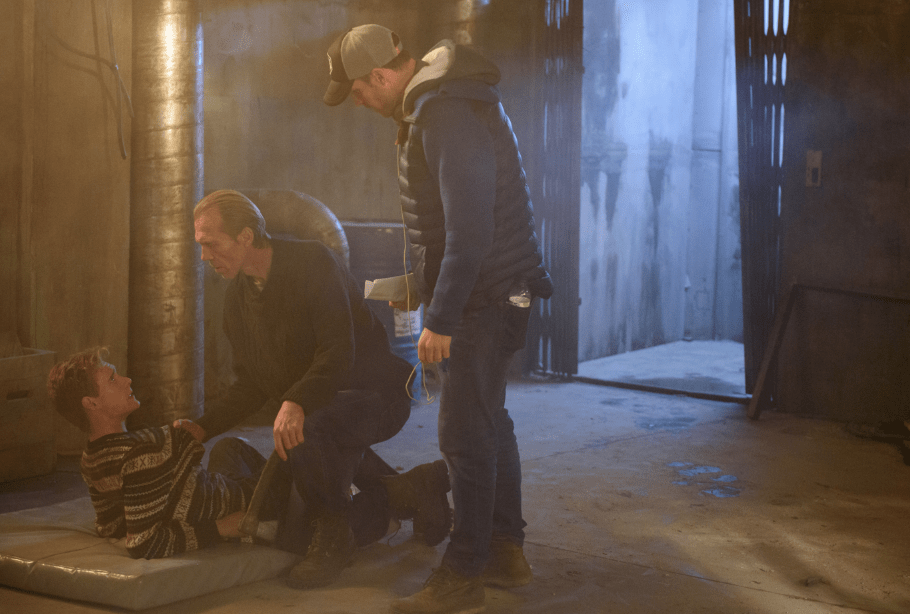 Ken: Were there any challenges in casting for this movie – scheduling conflicts for example – and how were you able to get Richard Brake involved?

Giles: Not at first, but when we needed pick-ups and little re-shoots most of the cast had become much more established and were in big TV shows so this is where the issues started. Obviously, Richard Brake is always in demand so luckily we didn’t have anything more to shoot with him, just some ADR which he did from Texas while I was in London and they recorded in Bulgaria so thankfully he had good wifi!

But my cast was so excellent. I loved working with them all. In fact, I’ve already worked with a lot of them on other shows and films already! And because of the good relationships we had, they were all up for coming back. It just took a while. Tip for directors and producers. Never fall out with your actors. You will need them for picks ups and ADR not to mention press.

Ken: You were an actor yourself – appearing in The Possession of David O’Reilly (2010) and The Harsh Light of Day (2012) – do you find directing to be a natural progression from performing in front of a camera? I imagine it was an invaluable experience to have when production began?

Giles: It was invaluable indeed. Knowing what actors go through is vital for directors and producers, especially in horror films. For most people, if you try being terrified or crying for five minutes you will struggle. Most actors find this hard, so to do this for a couple of weeks is incredibly difficult. Knowing what they are going through it really helped when I was directing them, knowing when to go for the close up, knowing when they needed to take a break or have a laugh because it’s intense. I remember one night after doing a hard days crying in The Possession of David O’Reilly and coming home and having a panic attack because the day was so full on! Understanding it means I can carefully judge how to shoot a scene or work with a certain actor, and they are all different so you are juggling so many emotions and feelings. So yes it was a natural progression for me. I fell in love with directing and it’s a joy to do it. 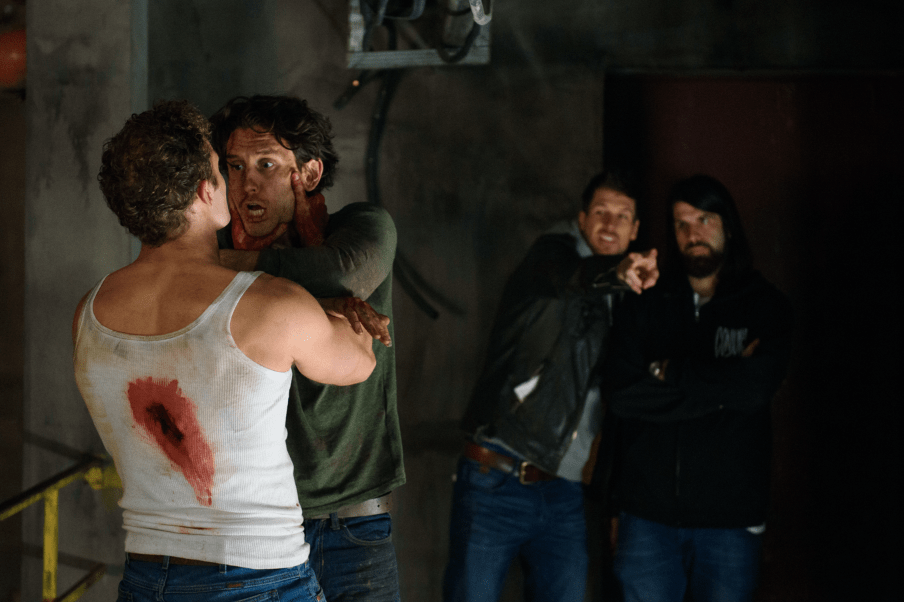 Ken: Did you face any challenges during production? It was intense to watch, but was it as physically exhausting to shoot?

Giles: It was mentally and psychically exhausting. It felt like organising and attending your best mates stag do (bachelor party) every day for 4 weeks! Luckily I had two amazing people with me, helping me along. My producer Julian Kostov, without whom The Dare wouldn’t have happened, and my cinematographer Andrew Rodger who were both rocks and wonderful companions through out the shoot and beyond.

But the main challenges were often created by lack of time. We had two days to shoot everything on the ‘Killing Floor’, one of our locations, as they were tearing the set down for another production coming in. We weren’t even supposed to shoot there as it was made for another movie entirely but I begged and begged and luckily I got it as it is stunning but at a cost of just two days when we needed six! Oh, and did I say it was two night shoots? Shooting at night is a killer. You think you can handle it but your brain does something weird and sort of stops functioning properly but you need to keep filming. Anyway, in the Killing Floor scenes we hang actors upside down, spray kids with blood, two big choreographed fights, throwing lead character Jay (Bart Edwards) off the balcony plus a load of dialogue and it was very challenging and demanding but we did it… but it took its toll on me. There’s a video, that will probably be on the Blu-ray at some point soon and I look frazzled! Proper done in. Nightmares for weeks. But it was worth it! Just.

Ken: The special make-up effects and visual effects in The Dare are really impressive; especially during Alexandra Evans’ cockroach scene. Who was involved in creating the SFX/VFX?

Giles: We had such an incredible team on The Dare and the effects team were no different. I wanted the film to be as practical as possible and had designed all the gags. But between Anna Andreeva and the two Ludomil’s they went above and beyond. Fake hands, heads, blood pumps, eyeballs, goo, the whole works. The best part for me was the skin pulls from Kat (Alexandra Evans) on Paul (Daniel Schutzmann)! I remember looking at the monitor going… “That’s real!!!” Sadly we had to cut a little of the gore down to get an 18 rating but it was so impressive. Interestingly the cockroach was actually CGI, well the one that went into Alex’s mouth was. Mitchell Norman who played Young Dom had a toy one in his mouth, which we added to in post. But I did enjoy those moments and it’s amazing what you can get away with in the frame of a camera. If you could see what is going on either side of it, it would ruin the illusion for all those watching that’s for sure! 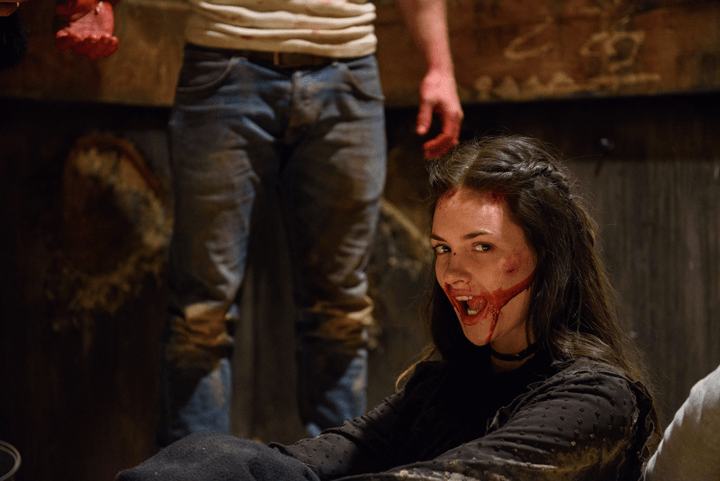 Ken: Roughly how long did it take to complete The Dare and get it in the hands of gorehounds; from conception to its initial release?

Giles: Six years! Two to write it and get it funded. Two to shoot (twenty two days over two years), one for post and one for festivals and the distribution conveyor belt to kick in. In the UK Lionsgate wanted to release it around October for the horror build up to Halloween but The Horror Collective in the US wanted to put it out as soon as possible and settled on March just gone. Thankfully the gore-hounds and wonderful horror family can get their eyeballs on it now!

Ken: How have you found the audience’s response to The Dare, both in the UK and overseas?

Giles: Wonderful. It’s been amazing how people have taken to it. Obviously, not everyone is going to love your movie but those that do really love it, it’s so nice. I feel like I’ve been welcomed to the horror community with open arms and it feels warm and lovely. I’m grateful to anyone who watches the film. It’s been such a hard and at times difficult journey with the fear it might not come out, but now it has and with some incredible people and distributors believing in it is a dream come true. 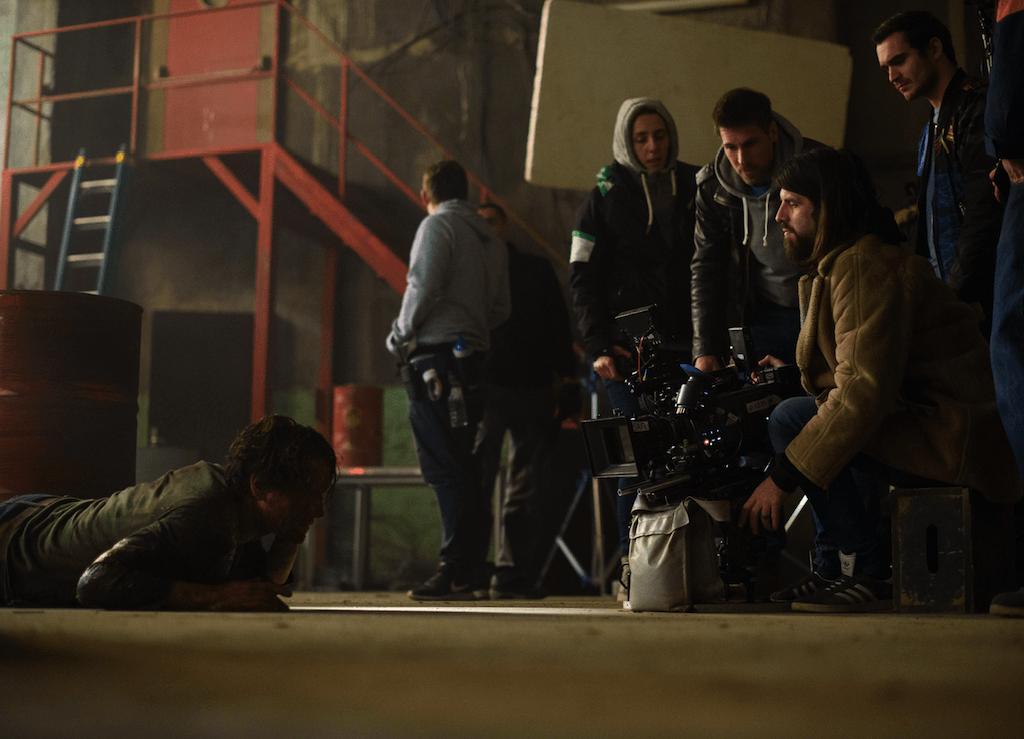 Ken: What genre movies do you feel have had the most influence on you as a filmmaker, and why?

Giles: I’ve become a massive fan of horror and the skill it takes to do it properly. People can dismiss horror as an easy route but it’s not, it’s one of the hardest to get right. Try filming a jump scare or a bloody arm coming off and see how you get on! It’s then you realise how great these horror masters are. It’s a craft. There are so many fans of this genre that they know what they want. So you have to please them but try to give them something different too. So many amazing filmmakers work in horror and that’s inspiring for any filmmaker. Though I love most genres, horror is the one that feels the most challenging and the best. Standouts are: Seven, The Others, Cabin Fever, Sixth Sense, Blair Witch and any Rob Zombie or Roger Corman movie!

Ken: Could we see The Dare 2 in the future, or are there other projects you’d like to pursue first?

Giles: Wonderfully we are in talks to do a sequel. Jonny and myself have a solid outline and the producers and distributors have been talking to us about it, so maybe it will happen.

Next though, I’m directing a thriller based on a best selling novel, shooting before Christmas and in Covid so should be fun. Then I have a few other projects lined up for next year. One cracking horror comedy. Hopefully, they will be announced soon and with any luck we can do The Dare 2 after that! Watch this space!