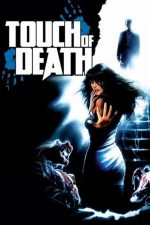 Lucio Fulci is so synonymous with movie splatter that it is kind of expected to see excessive amounts of bloodletting (and rimozione degli occhi) whenever his name appears during the opening credits. And whilst Touch of Death isn’t quite the same level of gorefest when compared with his earlier efforts – specifically 1979’s Zombie Flesh Eaters (review) and 1981’s The Beyond (review) – it still offers a generous amount of face-melting fun (literally) that made me fall in love with his giallo/horror output.

Known in Italy as Quando Alice ruppe lo specchio (or When Alice Broke the Mirror), Touch of Death was developed as part of a series entitled I maestri del thriller (or The Masters of the Thriller) aimed at the direct-to-video market. Eight films were released between 1988 and 1990, each developed by a different Italian director with the sole exception of Fulci, who took on the directional reigns of two projects; 1988’s Touch of Death and Sodoma’s Ghost (1988). I maestri del thriller also included Mario Bianchi’s Non aver paura della zia Marta (1988), Leandro Lucchetti’s Bloody Psycho (1989), Andrea Bianchi’s Massacre (1989), Enzo Milioni’s Luna di sangue (1989), Umberto Lenzi’s Le porte dell’inferno (1989), and Giovanni Simonelli’s Hansel e Gretel (1990). 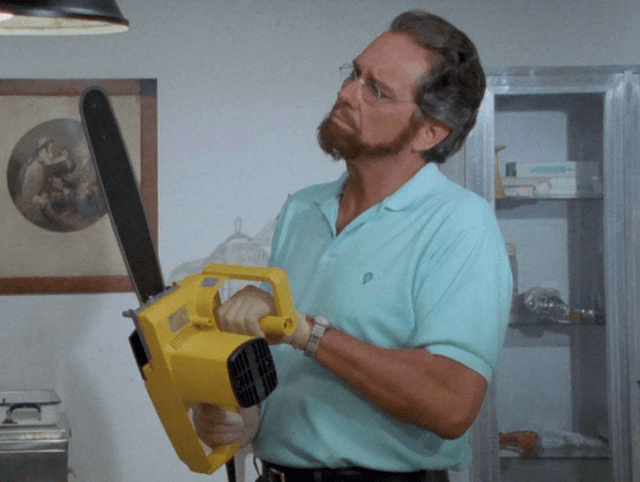 Touch of Death begins with a radio broadcast of a horse race. You see, Lester Parson (Brett Halsey) has a gambling addiction which has resulted in significant debt, but yet he appears unperturbed. And why would he be? He’s frying up a generous cut of steak in the comfort of his country home. In fact, he made the cut himself…

Biting into a sliver of human flesh blissfully, Lester slices off another morsel of the cooked meat for his pet cat to enjoy.

Disposal of the body won’t be an issue for Lester. He has a chainsaw for dismemberment, and a meat grinder to mince everything down for his hoard of hungry hogs. But he knows that he must seek out another widow soon – preferably one with a small fortune – so he can rid himself of increasing debt and harassment from the shady loan shark (Al Cliver) he can’t help borrowing from. And what better way is there to find a “life-long” companion than through the Loney Hearts column of the local newspaper? 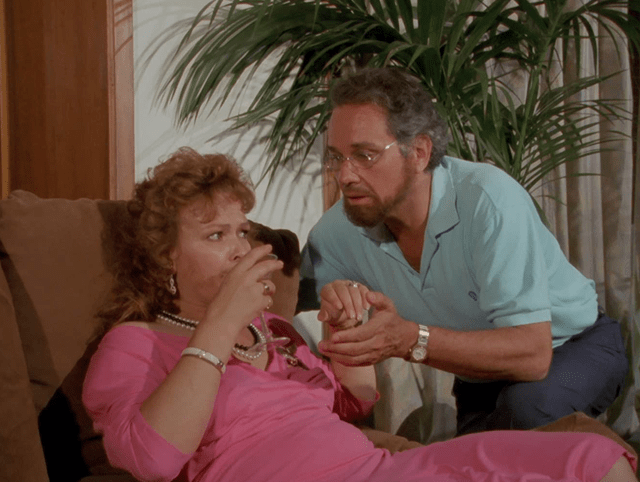 Laying on the charm, Lester quickly wins over the obnoxious, sexually frustrated alcoholic Maggie MacDonald’s (Sasha Darwin) heart (and her loins) despite his repulsion of her, but he just can’t seem to get one final glass of Prosecco (laced with poison) down her throat. It is one of the many strange comedic moments Fulci has sprinkled throughout Touch of Death. No matter! Lester can just bash her brains in instead, but Maggie isn’t going to go down without a fight!

In one of Touch of Death’s most gruesome moments, Lester emerges victorious and it only took a cracked skull, a lost eye, and a microwave massacre to best his opponent. But he can’t rest on his laurels just yet! Now he must dispose of Maggie and his hogs are no longer famished… 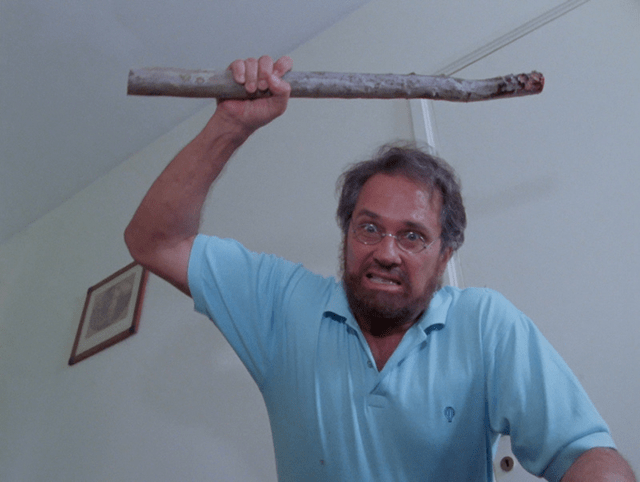 Unlike his earlier output, such as 1980’s City of the Living Dead or 1981’s The House by the Cemetery (review), Touch of Death is quite conventional for a Fulci movie. It just doesn’t have that same dreamlike quality that featured heavily in his earlier genre work. That is not to say that Touch of Death doesn’t delve into surrealism. Lester frequently converses with himself via cassette tape, blaming a copycat killer for committing the exact same crimes and for leaving breadcrumbs of evidence for the police which puts Lester at risk. In Quando Alice ruppe lo specchio, Lester’s reality is shattered, leaving nothing but fragments of delusion. There is no copycat killer… The cannibalistic antagonist is just sloppy!

“Don’t try to tell me this is just a coincidence? Common sense rules that out. Common sense also rules out the possibility that there’s someone out there that can read your mind. He’s just copying you. Remember, he never goes into action before you do, does he?” 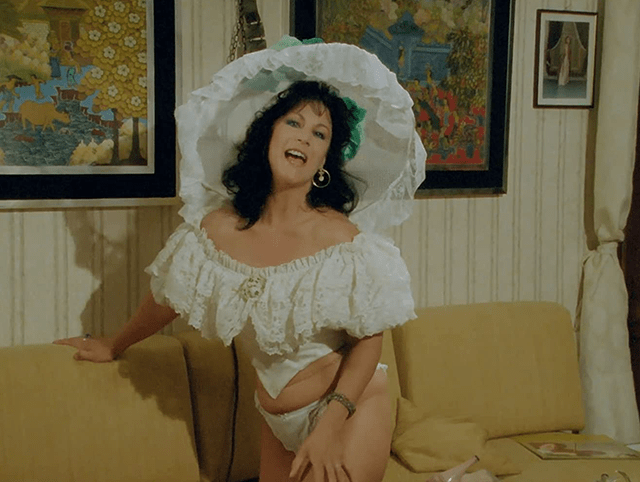 Brett Halsey is no stranger to the genre, having appeared in 1958’s Return of the Fly and Fulci’s later effort, 1990’s Demonia. Here he evokes the calm before the storm, portraying Lester as a confident, charming individual, but as his mask begins to slip, we see his true self emerge; the psychotic man news reporters have described as simply ‘The Maniac’. This is perfectly exemplified in a later scene where Lester kicks his beloved cat Reginald out of the way. It is symbolic of the state of his psyche and is perhaps the only scene in Touch of Death where I found myself flinching.

I could feel this overwhelming sense of deja vu whilst watching Touch of Death. Then I remembered… Six out of the eight films in the I maestri del thriller series, including Touch of Death, would later be edited into Fulci’s very own A Cat in the Brain (1990); a self-aware retrospective of his career… You see, Fulci was only supposed to be involved in the I maestri del thriller series as a supervisor, but his increased involvement led to the series being released by Formula Home Video under the heading Lucio Fulci presenta. 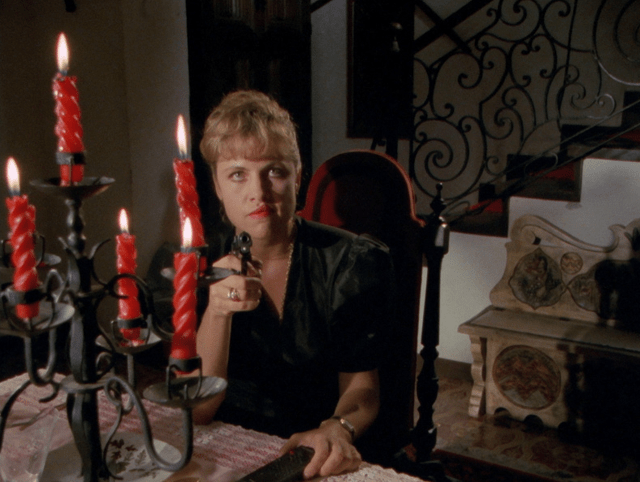 Dissatisfied with Touch of Death, Sodoma’s Ghost, and perhaps I maestri del thriller as a whole, Fulci would create the meta-cinematic A Cat in the Brain in which he portrays himself, a horror filmmaker, tortured by murderous fantasies that mimic the violence he has created; his filmography. In the UK, A Cat in the Brain would overshadow Touch of Death due to the British Board of Film Classification’s (BBFC) refusal to grant the former a rating effectively banning it from UK distribution until its resubmission in 2003.

Like Fulci himself, I do feel slightly dissatisfied with Touch of Death. The Godfather of Gore earned this moniker – a title he shares with Herschell Gordon Lewis – through his balls to the wall style of exploitative filmmaking, but towards the end of the 1980s, Fulci was finding it difficult to secure theatrical distribution. After the disaster that was Zombie Flesh Eaters 2 – with Fulci leaving production early due to illness, or through a dispute with the producers depending on who you speak to – Touch of Death was supposed to be a return to form for the gore maestro. It was not to be… However, Touch of Death is a respectable direct-to-video effort done the Fulci way!