AKA Bad Hair Day in LA! Supposedly based on Limp Bizkit front man Fred Durst’s encounter with an obsessive fan, The Fanatic manages to offend every trope in the human spectrum. I try not to pan movies, no matter how much they deserve it, but The Fanatic welcomes, yes even begs the audience to do just that.

Where to begin? Why not with the film’s star, John Travolta. Travolta has had a career downturn of late with Gotti roundly recognized as his worst performance, but here he plunges into a deep, bottomless ravine. The Fanatic makes Battlefield Earth look like Blade Runner by comparison. The star wears a ridiculous toupee, which is saying much considering a career consisting of bad hair pieces. It is distracting to the point where he might as well be sporting a live badger on his pate.

Then there is the character he plays. Moose, a 60 something loser who many critics felt displayed symptoms of autism, careens from scenes of pathetic self-comfort, rocking back and forth in a child like manner, to explosions of rage and anger. I would hesitate to call his character autistic after consulting with my resident behavioral specialist, but he shows signs of explosive bi-polar disease, developmental disorder and regressive disorders. Some say it was a brilliant performance but I felt it was poorly handled and destroyed any sympathy the audience might have for the character. 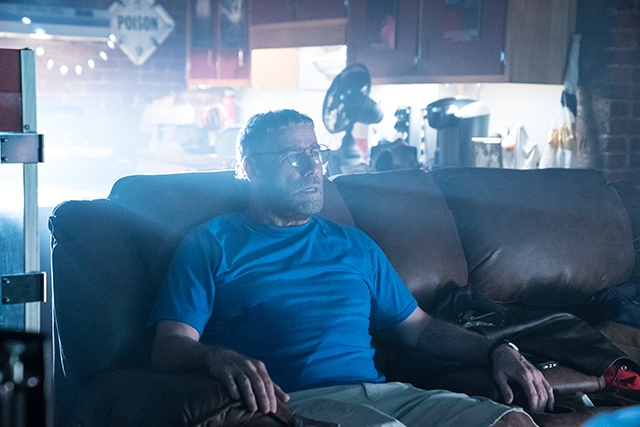 This is typical of the entire film, which in turns shows antipathy towards fans, Hollywood idols, women, homosexuals and people in general. There are no likeable characters therefore no center to the film to which a viewer can attach its loyalty. Simply stated, its difficult to enjoy or like a film that doesn’t appreciate or like its audience.

The film centers around Moose (John Travolta) who lives in an apartment surrounded by movie memorabilia. He worships a horror movie star, Hunter Dunbar (Devon Sawa) and finds out the star has an appearance scheduled at Moose’s favorite memorabilia store. Our boy then purchases a leather vest that Dunbar wore in a film for $200. Which brings us to another question. Where does Moose get his funds to pay for a Hollywood apartment? His only visible means of support is posing as a Hollywood trope along the side of faux Marilyn Monroes, hustlers and pickpockets on Hollywood Boulevard. Moose’s character? An English Bobby, sounding convincing as a cheap Las Vegas impressionist. He’s certainly not bringing in as many tips as Marilyn. 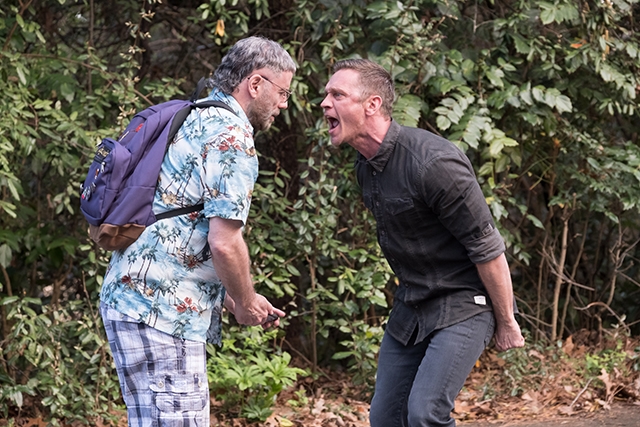 The night comes when his idol is appearing at the store. Moose shows up, vest in hand and sees Hunter. However, with Moose next in line Hunter is called away, as his ex-wife initiates an angry exchange. Moose follows the actor into the street where the two get into an angry confrontation. We hear Travolta whining “All I want is an autograph” while all Dunbar sees is a disturbed fan come to harass him.

Back at Moose’s apartment he is visited by his friend Leah (Ana Golja), an aspiring paparazzo. She also does narration consisting of barely understandable clichés about Hollywood and Los Angeles, which add nothing to the film. But Leah is also Moose’s enabler and after getting him into a party of Hollywood elite (where Moose, sticking out like a sore thumb, gets humiliated and tossed) she gives him an app showing the location of stars’ homes. Bad idea.

Moose hikes his way to Dunbar’s estate and while he tries to explain he merely wants an autograph; Dunbar reaches his boiling point and assaults the bumbling hulk. Undeterred, Moose returns that evening after Dunbar has fallen asleep after a bout with pills and beer. Here’s where things get fairly creepy. Travolta, sniffs the man, licks his face and then brushes his teeth with the actor’s toothbrush. Sure, the guy may have issues but this is going way off the highway. 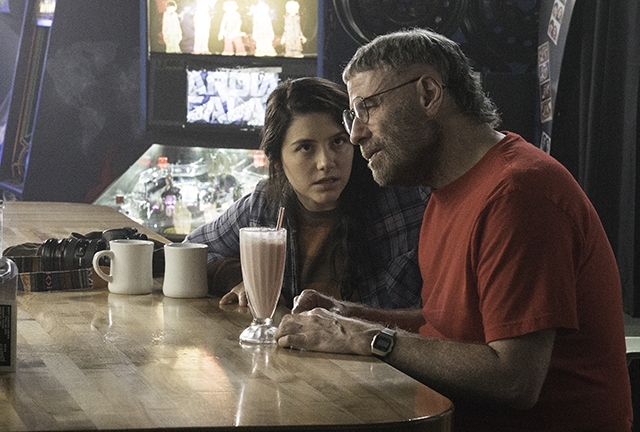 Despite being warned by Leah he has become a stalker, Moose keeps screaming “I am not a stalker!” and “Why are you so mean to me!”, both catch phrases for the disturbed fellow. Moose makes another visit to Dunbar’s estate, where the maid (and the actor’s lover) tries to shoo him away. However, he incongruously punches her in the face and she falls backwards, conveniently smacking skull against enormous fountain. Moose doesn’t seem disturbed by this and leaves the body where it fell.

The next evening Dunbar awakes tied to his bed with an elaborate rigging a sailor would have difficulty executing let alone a man with developmental problems. Moose’s body is curled up on the floor in a pool of blood, giving the impression the stalker committed suicide. Not so fast, my friends.

From here the film launches itself into full horror film mode, which is the best sequence of the story. Too bad it only lasts a few minutes.

Let’s draw a line down the page and discuss the merits and negatives of the film. On the plus side, the score is quite engaging. The cinematography is well executed and professional. Same for editing, set design and lighting. 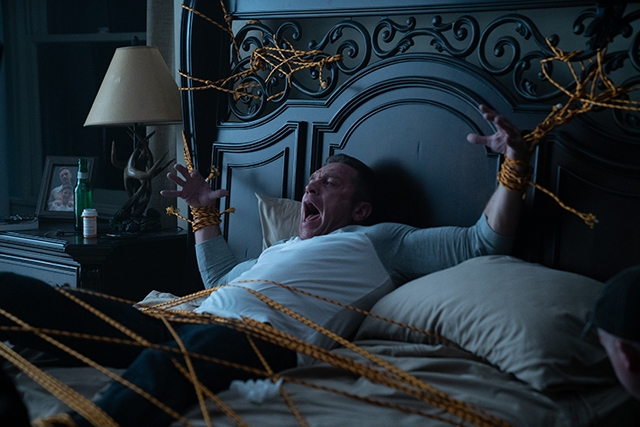 But, ah, the negatives. Overall, the film gives the impression that Fred Durst is giving all of us his middle finger. Why so serious, Fred? He seems to have a need to remind us he is a big rock star (or was). One painful sequence has Dunbar driving and turning on a Limp Bizkit song while yelling “Oh! That is nice!” as they rock out to Limp Bizkit’s ‘The Truth’.

The film’s scenes are broken up by little animated sequences that are interesting, but add nothing to the narrative.

The acting isn’t atrocious but the characters are. Which means the poorly drawn figures and inane dialogue weaken the acting to point where its difficult to tell if the performances are effective.

The ultimate question of course, is does the film merit watching? I believe it might be a generational question. Some thought Travolta’s performance brilliant, others, obviously disagreed. Considering the film’s philosophical affinity to Joker (review), if one was a fan of that movie you might enjoy The Fanatic.