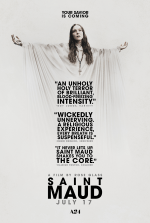 Producer Jason Blum was quoted as saying, “There are not a lot of female directors period, and even less who are inclined to do horror”. It wasn’t long before Blum had to backtrack on his statement when it was pointed out to him how many female directors there were in horror, all of which were eligible to create imaginative horror features.

Recently added to that group is Rose Glass, who has set her first feature, Saint Maud, in the traditionally male-dominated horror genre and was named the winner of the IWC Schaffhausen Filmmaker Bursary Award at a ceremony held at the 2019 London Film Festival.

Chair of the jury, renowned director Danny Boyle, called the film “a thrilling cinematic journey through madness, faith and death” and declared Glass “an extraordinary talent and powerful storyteller with a singular vision”.

“I didn’t set out to solely make horror films, but I’ve always liked dark, messed-up films that are shocking and scary but make you feel something connects you to it. There’s enough messed-up stuff in Saint Maud to keep die-hard horror fans satisfied, but it’s as much a dark, complicated character study as it is a horror film.”
Rose Glass, Director of Saint Maud

That is as good a description of her film as I could offer. Her film is far more complex and layered than a straightforward horror flick.

The film certainly opens with a horrific scene, as Maud (Morfydd Clark) is seen hunched in the corner of a room, hands covered in blood, trembling at the sight of a female corpse dangling from a medical bed with blood dripping down her long hair.

This flashback is not immediately explained, but we soon discover that the image bears a striking resemblance to a photographed dance pose from the terminally ill ex-dancer/choreographer Amanda Kohl (Jennifer Ehle), who happens to be Maud’s next private patient.

It is revealed early on that Maud is a recent religious convert who believes that God talks to her directly and has a special purpose for her alone. It is while staring at the images of her dancer patient that Maud deciphers God’s previously unclear plan. She asserts that she is destined to save Amanda’s soul before it moves on to the afterlife.

Formerly adored and celebrated, in her final weeks Amanda has chosen to isolate herself in an old mansion perched on a clifftop overlooking a rundown seaside town. Curt and prickly but still displaying a caustic sense of humour, Amanda surprisingly warms to her new young nurse, intrigued by her naivety, her meticulous devotion to her work and her fervent religious faith.

Amanda is vaguely amused by Maud’s belief in her divine purpose to save the ‘lost soul’ of her depressed, chain-smoking, hard-drinking, lesbian patient, but also comments that a pretty young girl should loosen up and have some fun in life. She decides to humour Maud in her convictions and plays along when Maud’s beliefs create shuddering ecstasies when she apparently senses God’s approval.

However, as Maud progresses in her mission she becomes increasingly determined (emptying the house of alcohol) and possessive, ultimately banning Amanda’s young lover Carol (Lily Frazer), from entering the house.

When Amanda celebrates a birthday by arranging a party and inviting all her old hedonistic, bohemian friends and her lover Carol too, the disapproving Maud begins to suspect she may have been led on.

This leads to an event that gets Maud fired and once back alone in her dismal flat, without a job and without a purpose, she spirals into a gruelling crisis of faith, a dark night of the soul which sees her wandering among the grimy fleshpots of the tawdry seaside town, sinking into dissipation and mental torment.

What Amanda didn’t know when she felt sorry for her well-scrubbed, lonely and innocent young carer, is that before her religious conversion, ‘Maud’ led an entirely different life as a different person, partly revealed in encounters with Joy (Lily Knight) a former co-worker.

However, one night, Maud is assailed by another sign from God, and after gut-churning acts of penance for her lapse, Maud formulates another plan to save Amanda’s soul.

Director/writer Glass has fashioned a shocking yet fascinating film about the madness that overcomes a vulnerable person when she gives herself over to extreme religious fanaticism. Saint Maud makes intelligent use of holy imagery and iconography, in particular the illustrations of another (albeit unconventional) religious obsessive, William Blake, to help us try to comprehend some of the aspects that fuel Maud’s compulsions.

Glass also elicits remarkable performances from Jennifer Ehle as the free-living, body-loving ex-dancer Amanda, now stoically aware of her creeping immobility and impending demise, and an extraordinary turn from Welsh actress Morfydd Clark, sensitively portraying Maud’s awestruck religious conviction, while not balking from the horror of her mental disintegration.

Glass also manages to capture the paucity of Maud’s grim ascetic life and economically depressed environment, tellingly evoked by Paulina Rzeszowksa’s production design and Ben Fordesman’s camerawork, in a screenplay which punctuates the grey, everyday life of a decaying town with the startling visions of religious ecstasy.

Saint Maud succeeds both as horror and as a moving psychological study of a sensitive, lonely, troubled mind. Stunning, powerful and constantly gripping, the film also startles us with a bold and terrifying denouement. Saint Maud is a truly impressive, confident debut feature – a daring yet compassionate examination of psychology and religion, offering several layers of complexity dressed in horror’s clothes.