The Howling is rightly seen as one of the best werewolf novels and one of the best eighties’ horror film adaptations. However, it also spawned a series of sequels which have awful review scores, and just a few years ago another sequel to the original film was published in the comic book format. But, how does the comic book series compare to one of the strangest and most disappointing sequels ever made? And what about the novel? Let’s compare all three: The Howling II (1979) vs. Howling II …Your Sister Is a Werewolf (1985) vs. The Howling: Revenge of the Werewolf Queen (2017)

In the novel, Marcia and Karyn’s ex-husband Roy are stalking and making Karyn’s life hell – sometimes in small doses, like allowing her glimpses of them or killing her plants, and other times by murdering those close to her. In the novel series, Karyn is prone to anxiety as she was raped in the first book, which is how she ended up in Drago (the colony) with all the werewolves. This incident is not mentioned in the second book but is replaced by a fear of howling, dogs, and frequent nightmares that the wolves are coming back. The werewolves are using gypsies to keep tabs on Karyn as she atempts to flee, which makes her more helpless than ever before, but the wolves have weaknesses… Marcia can’t transform fully now after being shot with a silver bullet at the end of the first book and Roy harbours some human emotions. This detracts from the werewolves as killing machines and makes them more like schemers who manage to get Karyn into increasingly desperate situations, but fail when Roy kills the wrong person on several occassions. Sadly, there isn’t much description on what the werewolves look like or the violence they cause. 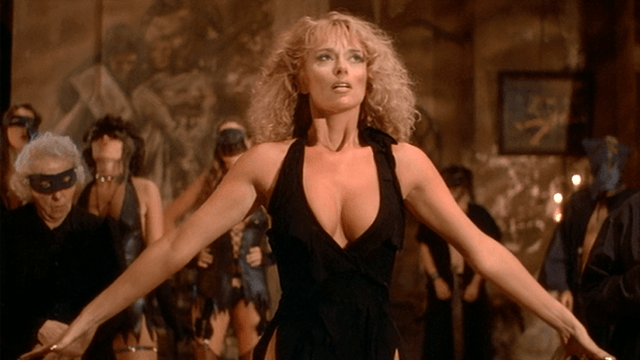 In the film, Stirba is immortal and has supernatural powers, including the ability to play a sound that makes people bleed from every orifice. She’s also a werewolf too and most of the townspeople are werewolves working towards her plan for world domination, when they’re not all fucking each other. Unfortunately Stirba’s 80s Lady Gaga-esque costume and the awful special effects make her look more ridiculous than scary. The werewolves seem to be easily defeated with guns, locking them in coffins, and apparently silver doesn’t harm some of them but titanium will. Sure titanium is harder to find than silver, but it doesn’t instil fear. The werewolf designs look like something out of Planet of the Apes (1968) and the violence looks dated and comedic. On paper the plot sounds like it should have been creepy, but the special effects and sex scenes let it down. 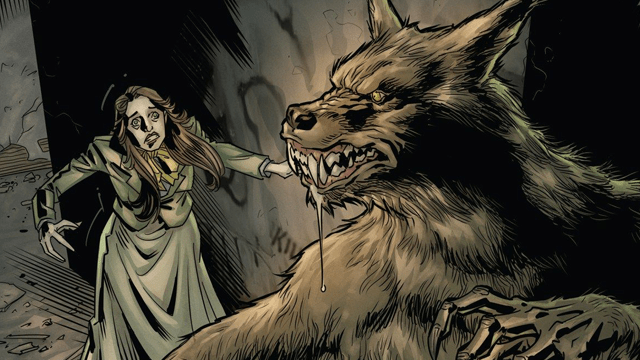 In the comic book series, Marcia is by herself for the most part, trying to get a mystical artefact which will allow her to raise werewolves from the dead. The last page in issue three (of four) is terrifying as she finally achieves her goal, and Chris who saved Karyn from the colony in The Howling film adaptation seems doomed along with humanity. Marcia kills multiple people in the comic book series, often in gruesome ways such as ripping a guy’s cock off and tearing a bone from a girl’s rib cage just to thrust it into another girl’s neck. This Marcia is not afraid to get her hands dirty but can also scheme to ruin Chris’s already shitty life. The inclusion of someone killing off everyone who saw Karyn transform into a werewolf at the end of the first film makes Chris seem even more doomed. Marcia doesn’t turn into full wolf often. Instead only parts of her transform which isn’t quite as scary. However, when the werewolves are in their full form – and the zombie werewolves appear in issue four – they are terrifying!

This is a short book, so character development isn’t strong on any character except for Karyn. Her life since Drago is summed up in a few pages and demonstrates how frail her nerves are as she meets with a therapist. This is shortly after staying in her old bedroom at her parents for several months following trying to live with Chris. Despite being anxious she is trying to get her life back to normal with her new husband and his son. This makes it all the more tragic when the wolves attack! Roy shows glimpses of being human by not wanting to kill Karyn’s stepson but under Marcia’s sexual power he crumbles which seems a bit unrealistic. In comparison, Marcia is pure evil to the extent that she can’t turn into a full werewolf and her moaning about it constantly doesn’t emit any sympathy from the reader. Finally, Chris seems to be happy-go-lucky guy who is playing the scene, enjoying life to the fullest, but is still determined to help Karyn whatever the cost. I felt that Chris was trying to distance himself from Drago and his past by trying to live in the present, but if this is the case why help Karyn so readily? 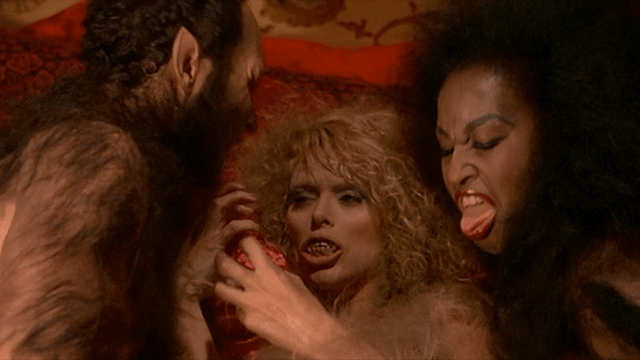 None of the werewolves have any character development – even characters like Stirba, and particularly Marcia from the first film who was alive during the end credits, but is not featured in the sequel at all. Maybe Mariana is meant to be Marcia but it wasn’t clear. Crosscoe the occult hunter (played by Christopher Lee) seems experienced and determined to stop Stirba as he failed before, but the most memorable moment for me is when he’s trying to blend in at the glam rock gig whilst spying on the werewolves. Ben (Karyn’s brother) and Jenny (Karyn’s colleague) are two dimensional and stereotypical idiots in a horror film – having sex when they’re scared in the hotel or Jenny following the creepy hotel owner’s son to the castle. 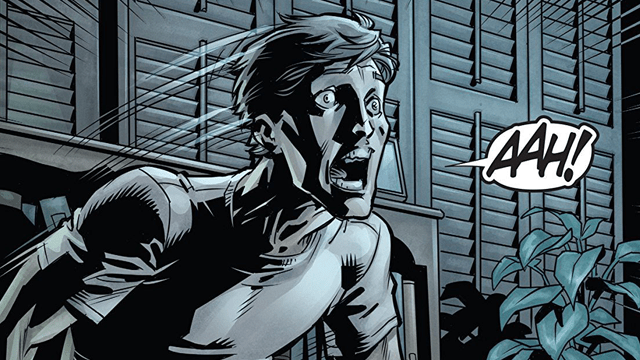 Chris is much more sympathetic in the comic book series. His girlfriend Trish died at the colony and very few people believe that Karyn turned into a werewolf. Instead they view him as her murderer. The isolation of Chris by his fellow colleagues at the news station, perhaps because they are scared of him, makes Chris’s situation worse than Karyn’s in the novel. Chris is desperate throughout the series, but he doesn’t seem jumpy or anxious even in the face of violence. Marcia in the comic book series is distancing herself from Wagner’s (the former leader of the colony) teachings by being more open in her appearance, by murdering people in brutal ways, and by tying to rule the world. The issue I had with this is that Marcia in The Howling film didn’t hint towards this.

Marcia and Roy are stalking Karyn and making her life hell just as she starts to get it back on track. She flees to Mexico to get Chris’ help again in battling the werewolves, but they didn’t count on how cunning Marcia is. This leads to a confrontation in the mountains which is sadly over too quickly, but at least in Marcia’s case you could see her death coming because of her inability to change fully into a wolf after the first book. 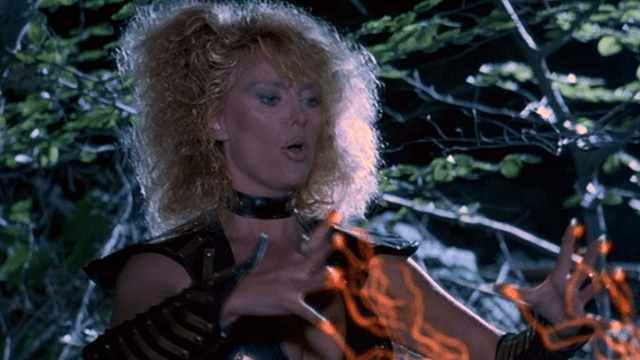 Ben attends the funeral of his sister Karyn, not realising that werewolves want to take her body because if the silver is removed, she will come back to life. Occult hunter Crosscoe, with some help from Ben and Jenny, decide to go to Transylvania to stop the immortal werewolf queen Stirba. There’s a lot of filler, sex and downright strangeness before the final battle occurs. The werewolves towards the start of the film reminded me of The Lost Boys and I can’t help but think it would been a better film with Christopher Lee going against these younger werewolves. I also have no idea how the writer of the book, Gary Bradner, helped to write the screenplay yet produced something so different to his second book. 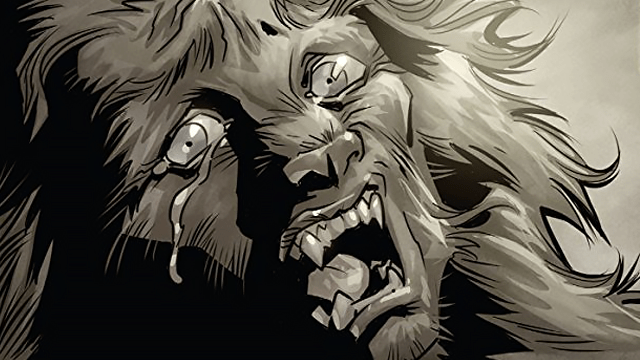 Following on from the first film, Chris is accused of murdering Karyn by those who don’t believe she was a werewolf, and most of the people who saw her transform and are dying under mysterious circumstances. Meanwhile, Marcia, the main female werewolf from the first film, is trying to get the hand of Akurra so werewolves can take over the world. Chris’ story makes you wonder how many people believe what occurs on TV and how the authorities would act. In contrast, Marcia’s story, whilst a bit farfetched, shows how much control Wagner had over the werewolves at the colony. This story doesn’t stray too far from the original film, contains elements similar to Howling II …Your Sister Is a Werewolf, and has several twists.

Most of Karyn’s interactions in the first part of the book take place in suburban areas, which makes them slightly less scary as there’s safety in numbers. However, when she goes out to Mexico – especially the mountains to see the gypsies – that’s when the setting adds to the fear. The werewolves are always in cheap, grubby accommodations which shows that revenge and their lust for each other is all that’s important to them. 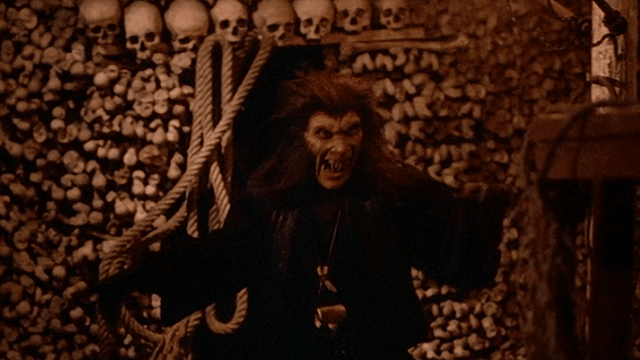 Most of this film takes place in Czechoslovakia, despite being billed as Transylvania. The scenes that don’t are mostly in scary places – including a funeral and an occultist lair. The shots of the Prague Astronomical Clock, Sedlec Ossuary (Skull Church) and the Prague Castle are all amazing. The whole town looks medieval and as most of the townspeople are werewolves (if not all!) this is a gothic nightmare. 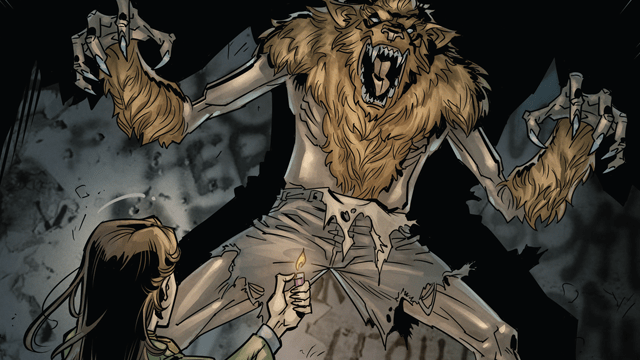 Most of the panels take place in suburbia but there’s still violence throughout, whether it’s in an office skyscraper or a rich man’s house. This shows that nowhere is safe! At least until we visit the colony which is overrun by protestors and the military thanks to Chris. Again, safety in numbers comes to mind so this setting seems less terrifying. Maybe if there were claw marks on the remaining buildings in the colony, or the colony was in further ruin, it would show just how hellish it is but at least the artist, Jason Johnson, shows how far it is from civilisation.

Overall, each second sequel to The Howling offers a different take on the werewolf mythology, but if you’re going for fear then the comic book series is the best, otherwise read the second book. Character development is flawed in all three, but both the comic book series and second book have at least one interesting well rounded character. I do however prefer the more down to earth story of the second book. And upon watching Howling II …Your Sister Is a Werewolf for the second time, it’s not quite as bad as I first thought! The locations are great after all, but it is still by far the worst of the three versions.