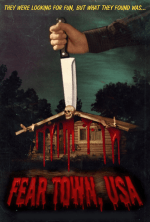 With an opening scene that’s bound to piss off every red-blooded, gun-toting American, but which had me in stitches, Fear Town, USA starts the way it intends to continue – irreverently.

We meet a couple parked at lovers lane; a news bulletin comes over the car radio that there’s an escaped mental patient moments before he dispatches said couple in a bloody and hilarious manner.

Meanwhile, Neanderthal bully housemates tease our dungeons-and-dragons playing, virginal heroes, that they are heading out to a St. Blevins Day party where there will be lots of girls looking to “get their pussies crushed” and they can’t wait to assist with this. Mustering their courage, our D&D fans decide to rectify their sex-deficient situation by also attending the crazy party. Its nice to note that this appears to be a world where incels don’t exist so, though these lovable nerds are clearly very VERY eager to lose the big V, they are not bitter or misogynistic about it; sadly this is actually refreshing. They are partaking in an old trope we haven’t really seen on film for some time – the quest to get laid. 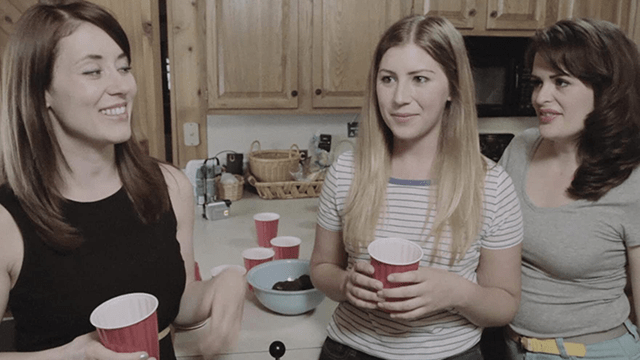 Elsewhere, lonely 17 year old Dana appears to be getting catfished by a predatory asswipe. He invites her to the same party our other characters are going to and she accepts… he thinks – her acronym-heavy communication skills are hilariously topical.

We meet three friends still ‘mourning’ the loss of the fourth in their Mean Girl posse; they talk excitedly about ‘pussy crushing’ and are blindly dismissive of good girl Jen who just wants to share her big secret with them.

Add in a group of de-invited guests who decide to camp outside and have their own competing party, a psychic, a cult in search of a sacrifice, and of course that escaped mental patient and you have a large cast of characters that could have derailed this film , but happily just enhance the wacky mayhem. 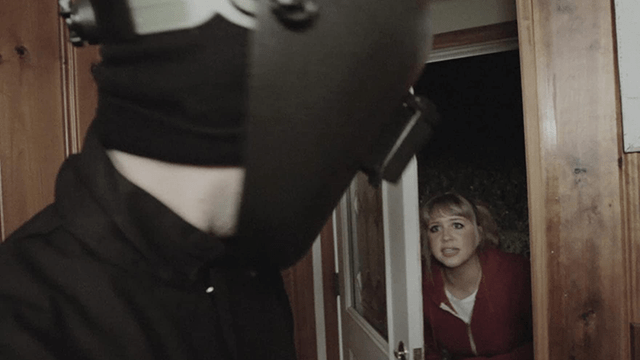 Written and directed by Brandon Bassham, and produced by iconic independent film company Troma, this movie is packed full of too many gems; hilarious dialogue and sight gags that come thick and fast so you don’t want to miss a moment.

Some of my favourites include celebrating heroic St Blevins who drove the towns Polish children into the ocean, the PC leanings of the de-invited group, Fuck Day, Pisspants Pat, the girl who’s convinced her ex is still into her, the Carnival of Dark Delights with its half empty cough syrups, the “there are several homosexuals attending actually”, Lenora’s ‘summoning dance’ including twerking, the guy who’s totally not the devil, the ‘Mean Girls’ ghost who taunts everyone with “you’re so fat” or “whatever” while she texts endlessly, and the nerds fist pumping rally cry which actually made me laugh out loud. 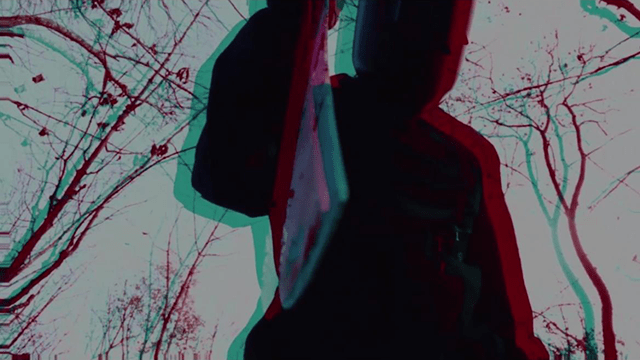 The entire cast give it their all without an iota of inhibition, their willingness to throw pride into the wind and allow themselves to be completely ridiculous for our amusement is impressive.

I also like its subversiveness; when it heads in one direction that feels familiar and we think we know where its going it pivots and turns those old clichés on their head. It manages to offend and then placate every group and faction that could possibly watch it.

As a massive fan of 80s cheesy horror, the music, the acting, the setting, the costume, the comedy, everything was perfect and warmed the cockles of this girl’s tacky horror heart. 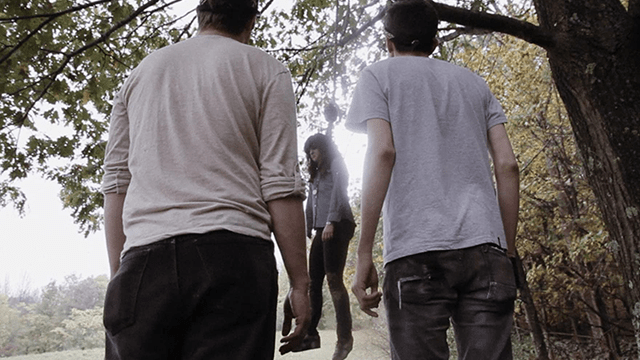 This film takes aim at every trope and filmic stereotype out there, but it does so with affection, and it’s a rare pleasure to watch a comedy that isn’t cynical or mean-spirited.

When it comes to horror, the scares are basically non-existent, but this is not a film that sets out to terrify you. It is instead an old fashioned gentle spoof of the horror genre as a whole, and a loving tribute to those trashy slasher films we love.

A good hearted and lively movie that I really enjoyed!