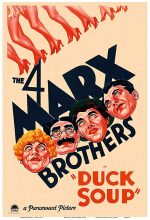 Hmm… I guess some topics are simply evergreen.

Yet, like so many film ‘classics’ Duck Soup hasn’t necessarily been viewed by people who consider themselves cinephiles, comedy fans or movie buffs. More shame on them for ignoring an influence which persists even into contemporary culture.

I find myself actively pitying those who haven’t seen any Marx Brothers’ films, apparently because they ‘don’t watch old movies’, because they’re ‘in black and white’ or because they didn’t have a dad who was a massive Marx Brothers fan, as mine was, and who initiated me from early childhood into the quick-wittedness, madcap absurdity and facility with puns that the Marx Brothers exemplified.

The story of Duck Soup (as always, simply a framework for the Marx Brothers’ relentless farce and satire) takes place in the fictional country of Freedonia. The super-rich widow, Mrs. Gloria Teasdale (Margaret Dumont) is unwilling to continue to finance the small, bankrupt country’s treasury unless her personal choice, Rufus T. Firefly (Groucho Marx) is appointed as the country’s leader. 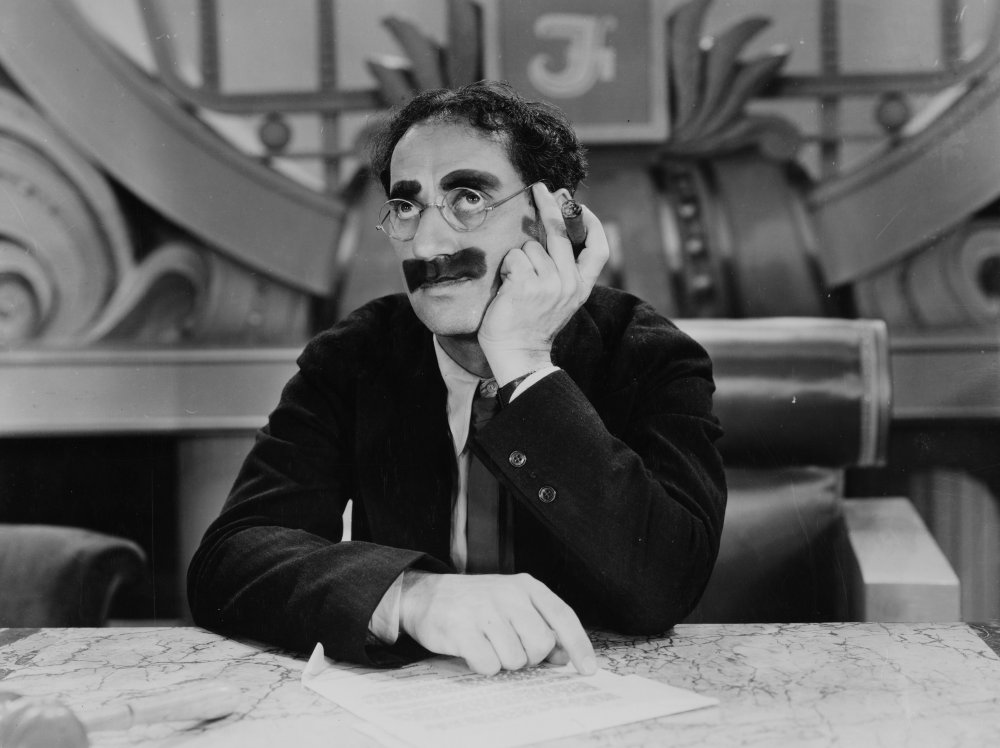 Meanwhile, neighbouring nation Sylvania is intending to annex the country. Trentino (Louis Calhern) Sylvanian ambassador to Freedonia, is using underhand political means to facilitate an invasion. Having failed at revolution, he decides to wrest control by insinuating himself into the favour of the wealthy Mrs. Teasdale, usurping Firefly’s place in her affections, and marrying her himself. Adding to the friction is the fact that Firefly is also courting Mrs. Teasdale, and like Trentino, hoping to get his hands on her money.

To aid him in his wooing, Trentino hires Chicolini (Chico Marx) and Pinky (Harpo Marx) as spies to try and dig up some dirt on Firefly and take note of all his movements, hoping to find a way of incriminating him in the eyes of Mrs. Teasdale and of the Freedonian government.

Unsurprisingly, Chicolini and Pinky prove to be less than efficient spies and when they fail to collect any pertinent information against Firefly, they try instead to infiltrate the government.

As Rufus T. Firefly operates only according to his personal whims, Chicolini manages to get himself appointed Secretary of War after Firefly sees him selling peanuts outside his window. Meanwhile, Firefly’s personal secretary, Bob Roland (Zeppo Marx), suspects Trentino’s motives, and advises Firefly to get rid of Trentino as ambassador by falling out with him. 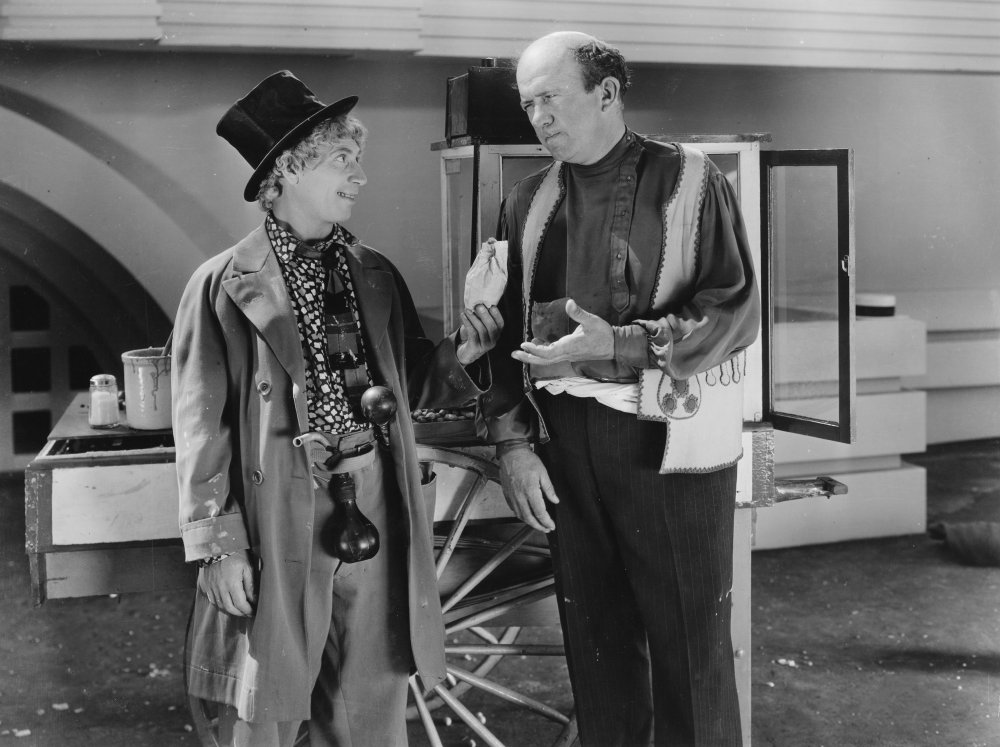 Firefly agrees to the plan, but it backfires when, increasingly incensed by an exchange of insults, Firefly gets carried away and slaps Trentino, challenging him in a fit of temper. As a result of the personal spat between these two men, their countries come to the brink of war.

Trentino learns that Freedonia’s war plans are in a safe at Mrs. Teasdale’s house and orders Chicolini and Pinky to steal them. Chicolini is caught by Firefly and put on trial, during which time war is officially declared. Easily stirred up into a war-mongering frenzy, the general populace break into a ludicrous and satirical song and dance, led by Groucho, Chico, Harpo and Zeppo.

With the trial for Treason deferred, Chicolini and Pinky join Firefly in an anarchic and incompetent skirmish which descends into general mayhem – a commentary on the pointless absurdity of war.
Duck Soup is the fifth of eight films starring the legendary Marx Brothers (Groucho, Chico, Harpo and Zeppo) and was seen as controversial in its time. It opened 10 months after Adolf Hitler was appointed chancellor of Germany, a country where all Marx Brothers films were banned (they were Jewish) and it was also banned from Italian screens by Benito Mussolini (all of this delighted the brothers). 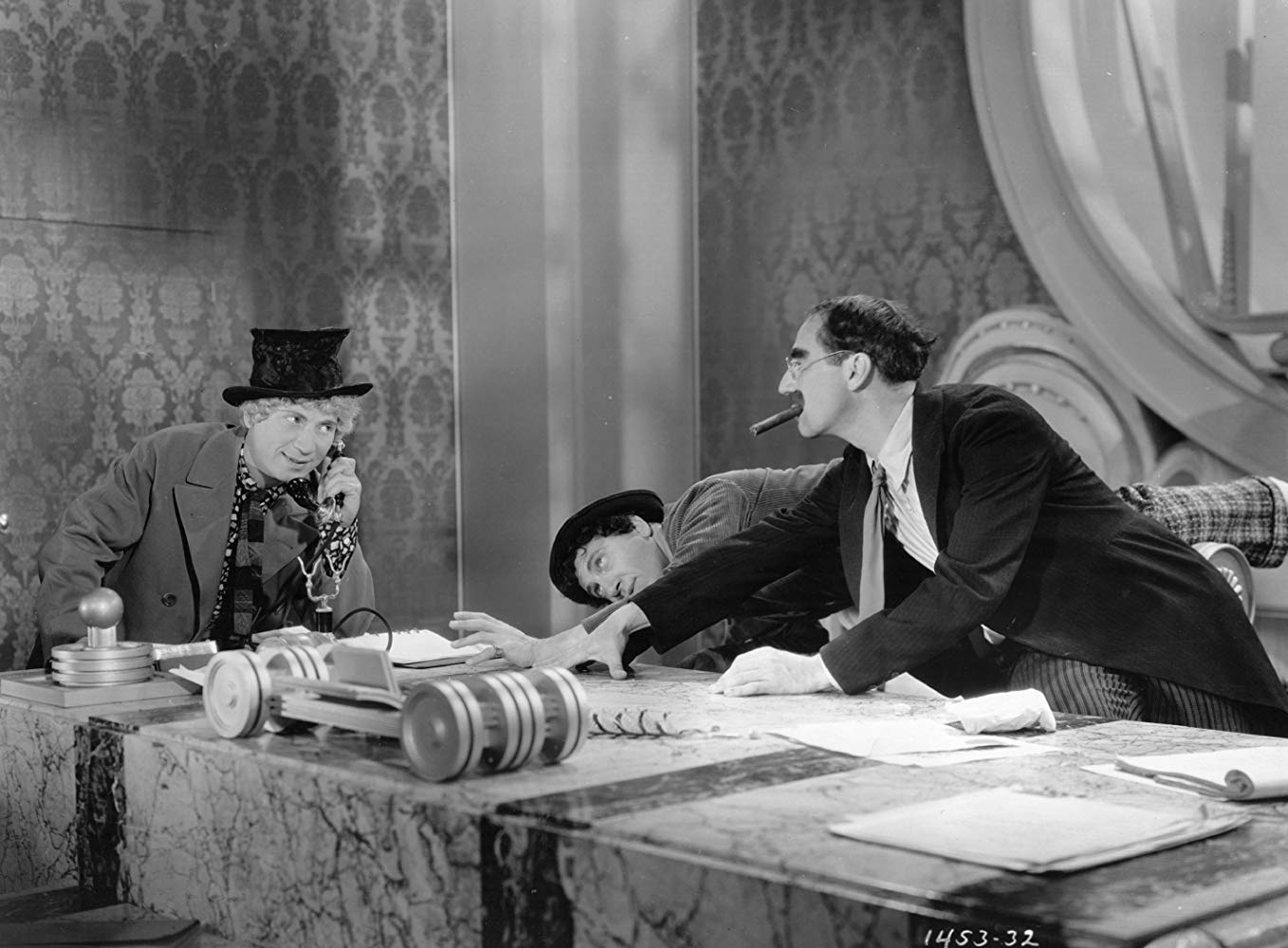 A town in upstate New York complained about the similarly named Freedonia to its ‘city of Fredonia’, prompting Groucho to write back to the mayor:

“Our advice is that you change the name of your town. It’s hurting our picture.”

As for their European influence, we might ask, ‘What unites Churchill, Salvador Dali and T.S. Eliot?’ The answer is, they all adored the Marx Brothers. “I had no idea you were so handsome,” Groucho Marx wrote to T.S. Eliot on receiving a signed studio portrait.

During an air attack on London in May 1941 Winston Churchill opted to watch Monkey Business and was ‘glad of the diversion’. Salvador Dalí saw the Marx Brothers as iconoclastic outsiders, and particularly revered the curly, blond-wigged Harpo as a man-child who made a virtue out of his muteness. Harpo however, did not relish being viewed as a muse for the surrealist movement. Later on Jack Kerouac also wrote a poem to Harpo Marx.

It may have been their reputation for insubordination and audacity (they were notoriously difficult to control) which caused Judd Apatow, the director behind Knocked Up, The 40 Year-Old Virgin and This Is 40, to comment in an interview:

“The first movie that had an impact on me as a person interested in comedy was Duck Soup…I was a fanatical Marx Brothers fan as a 10 year-old. It might have been because I loved their rebellion – it seemed like they were flipping the bird to everyone.” 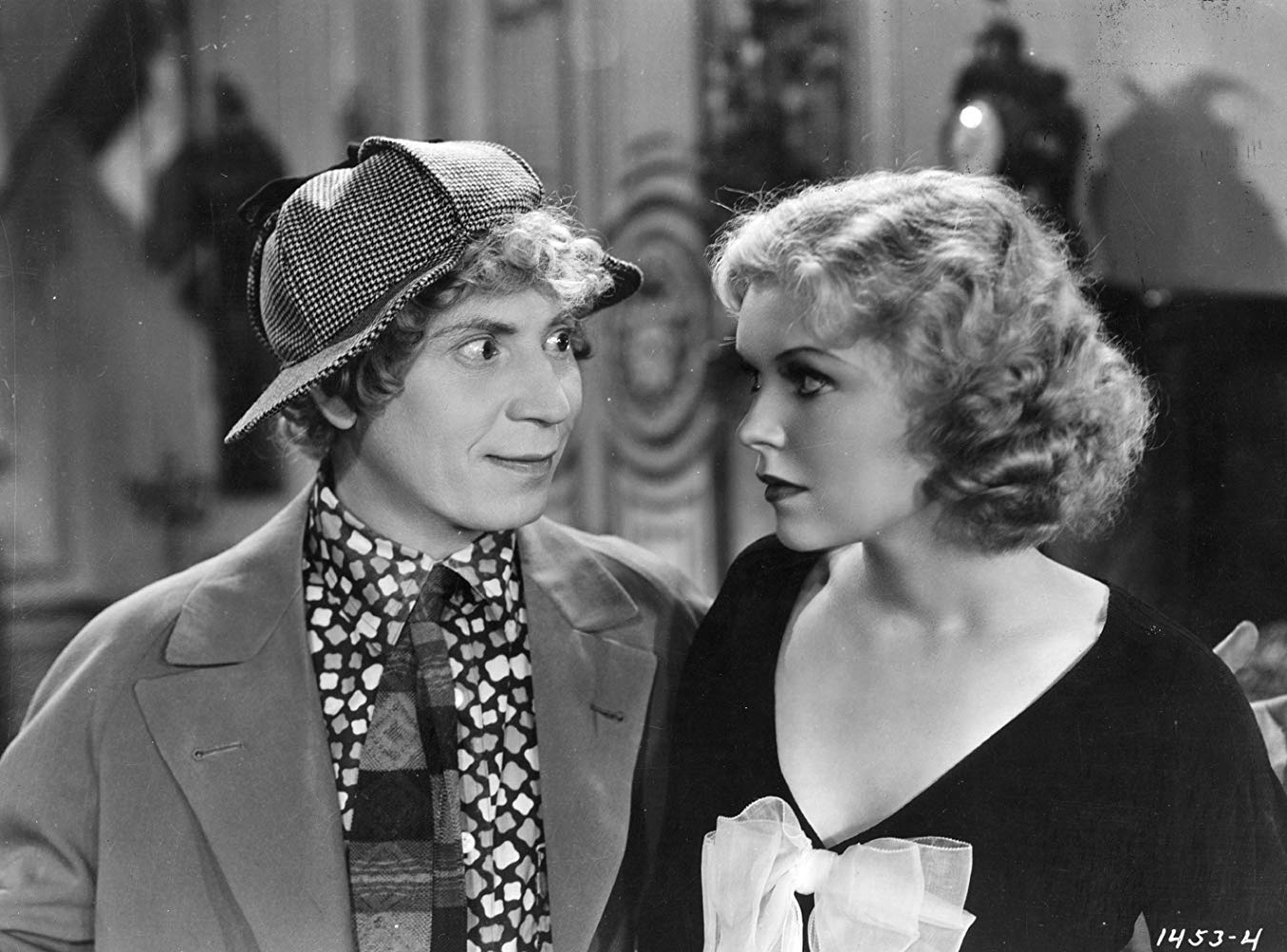 Perhaps Apatow was referring to the period when The Marx Brothers were reintroduced to a new generation during the turbulent period of Vietnam, Civil rights and Watergate in the 1970s. The Marx’s anti-establishment attitude has always appealed to revolutionary youth and their films have played in scores of college campuses across America and Europe.

Introduced to the Marx Brothers as a child by Saturday Matinees on TV in the U.K, their quick-fire verbal jousting, Groucho’s clever, quotable one-liners and Harpo’s mischievous physical slapstick became my benchmark for comedy.

Familiarity made me able to spot the enormous influence that the legacy of the Marx Brothers had on subsequent generations of performers. Woody Allen’s admiration for Groucho was evident in many of his own comedic performances. In addition, he quoted Groucho in the opening monologue of his 1977 romantic comedy Annie Hall, Allen’s character in 1986’s Hannah and Her Sisters went to see Duck Soup to cheer himself up and his 1989 movie Everyone Says I Love You took its title from a song in Horse Feathers and ends at a party with Groucho and Harpo lookalikes. 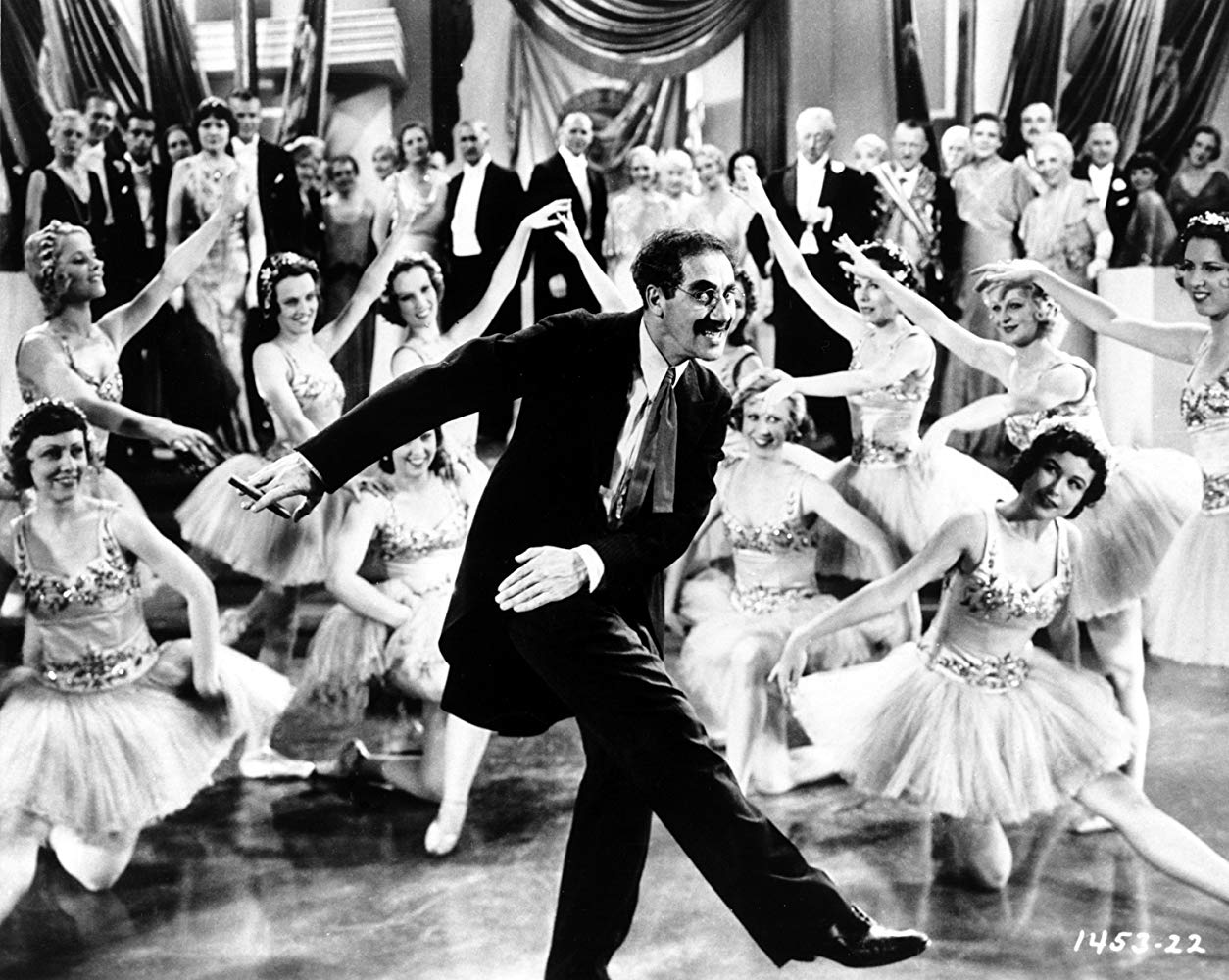 John Cleese of Monty Python and Faulty Towers, admitted that Groucho was a hero of his and an influence on his slapstick style. The Beatles used the Marx Brothers’ irreverent approach and comic asides as a basis for their own films, A Hard Day’s Night and Help. American Comedy actor Adam Sandler remembered being woken by his father at 1am because a Marx Brothers’ movie was on TV. Wes Anderson’s film The Grand Budapest Hotel was likened by one critic to “Agatha Christie starring The Marx Brothers” (which might partly explain my love for Anderson’s movie) and in Tim Burton’s Big Eyes, screenwriter Larry Karaszewski admitted he named one character Mrs Teasdale after Margaret Dumont’s role in Duck Soup.

The Marx Brothers’ influence remains surprisingly durable in contemporary culture. Without Groucho we wouldn’t have Bugs Bunny, Hawkeye in M*A*S*H or countless other comedy heroes. But their effect extends outside comedy or movies. The band Queen named two of their albums after Marx Brothers’ films – ‘A Night at the Opera’ and ‘A Day at the Races’. The Groucho Club, the London watering hole for actors and media types, took its name from Groucho’s famous line about not wanting to join a club which would have him as a member. There is even a pub in Glasgow’s Hope Street named ‘Rufus T Firefly’.

Groucho Marx can be seen on the cover of his friend Alice Cooper’s album, Alice Cooper’s Greatest Hits. An unlikely friendship, Cooper and Groucho bonded over their love of Vaudeville – “Groucho used to call me in the middle of the night and ask me to come over,” Cooper recalled. “We’d sit around and watch old black and white movies and he loved to point out personal things I DIDN’T want to know about the actors.” 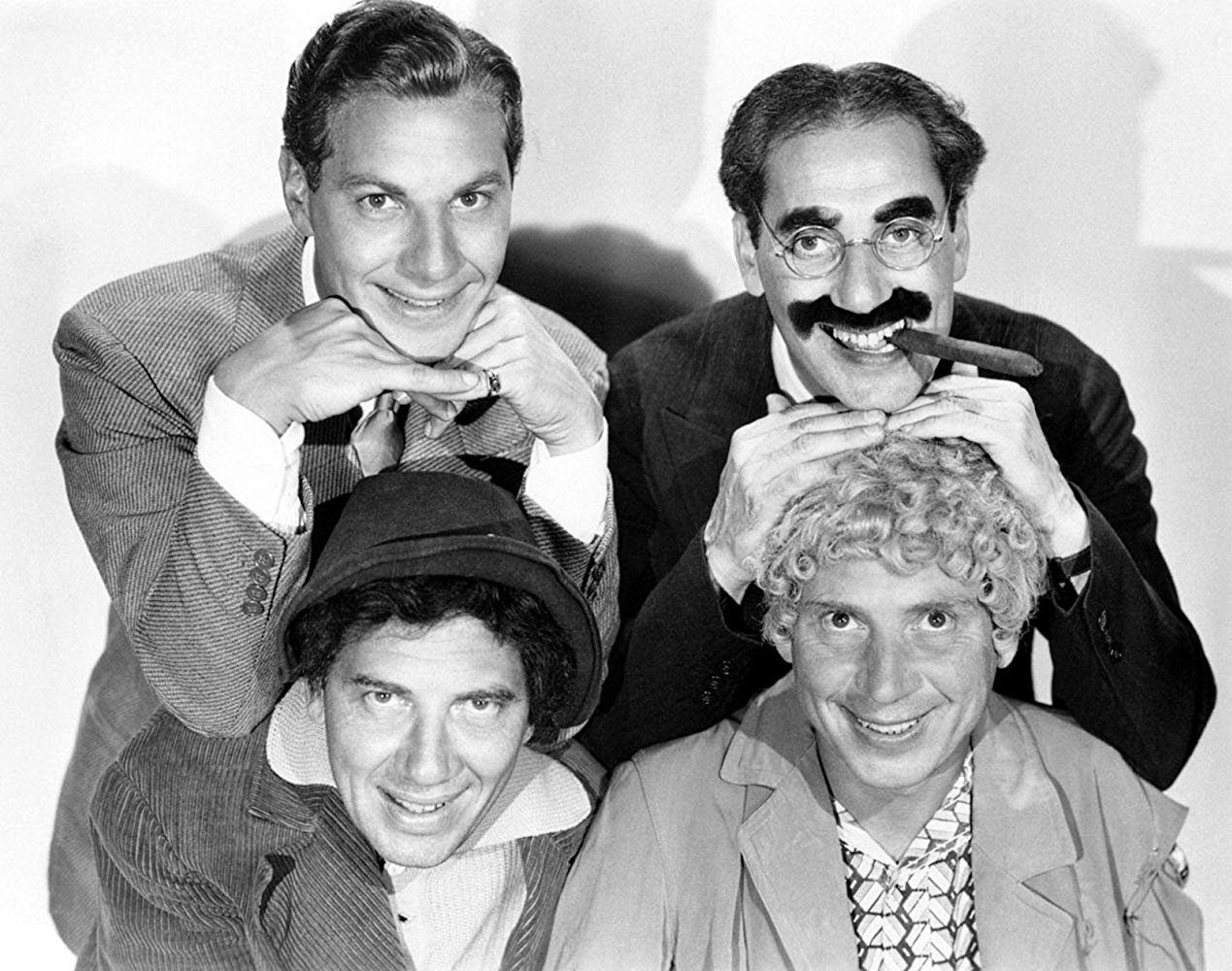 A multitude of Groucho’s quips are recycled to this day, for example, “I never forget a face, but in your case I’ll be glad to make an exception” or “The secret of life is honesty and fair dealing. If you can fake that, you’ve got it made,” or “I’m not crazy about reality, but it’s still the only place to get a decent meal.” There are so many, they have been compiled into books. One of his one-liners seems particularly useful in describing many world leaders:

“Those are my principles, but if you don’t like them I have others.”

Of the great comedy teams of Hollywood’s Golden Age, the Marx Brothers continue to influence popular culture decades after their heyday. They were certainly the most unique, anarchic and irreverent, and so far ahead of their time that some of us are still trying to catch up with their comic genius.