The Cabinet of Dr. Caligari (1920) | Directed by Robert Wiene 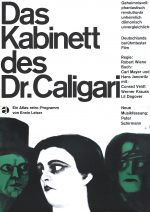 It is safe to say that this is cinematic artistry at its very best. This horror, although silent, screams of an unhinged nightmare full off vivid expressionistic imagery. From the beginning the film’s soundtrack alerts the viewer that something dark and sinister is on the cards. The set is the work of a mastermind and with the scenery being uneven and far from any utopian environment, this is reflected in the twisted music. The imagery created is an extension of the emotional state of the main characters, especially Francis who is played by Fredrich Feher. Just like the environment they are in, the writer has pushed each characters equilibrium to create a paranoid community which seems to be controlled by a madman, Dr. Caligari.

This film noir is the only film to produce a set that is totally off-kilta. There is nothing symmetrical, balanced or ‘normal’ anywhere. This portrays something is not as it seems, and in the story, directing and acting marries well in such a crazy setting. The Cabinet of Dr. Caligari uses many tricks to tell the story and I feel there is a use of dark soliloquies seen in the likes of Shakespeare’s Macbeth or Hamlet. Another way director Robert Wiene brings the viewer into the forefront of the film is the clever use of the ‘iris shot’. This gives a ‘peeping tom’ appeal and lets the audience think they are peeping on each character. 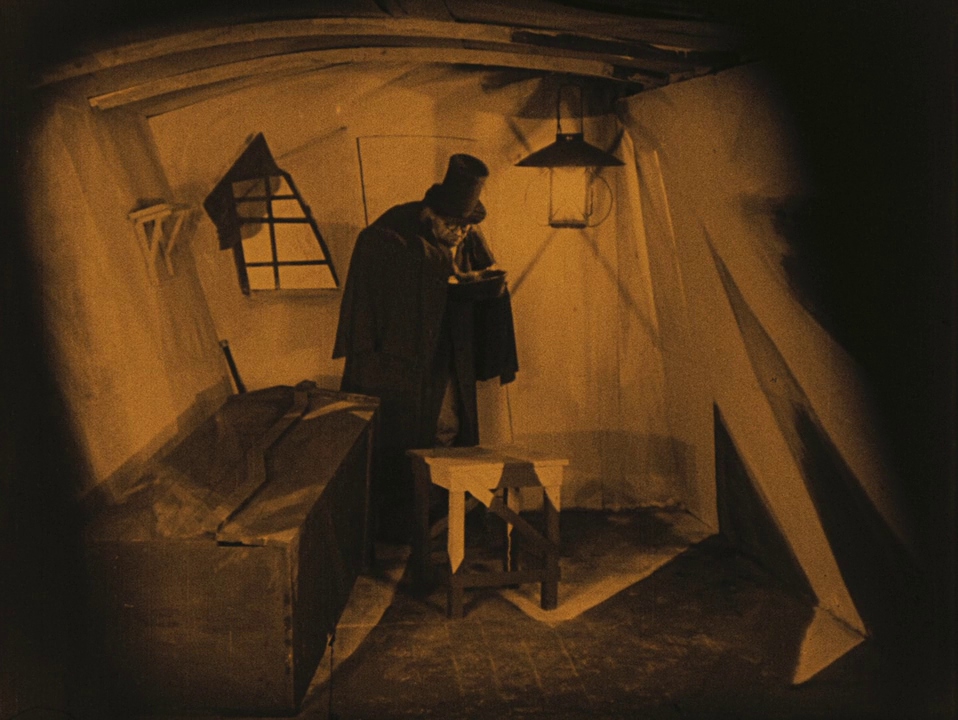 The film begins with Francis telling an older gentleman about the time he went with his friend Alan to see a Somnambulist at the carnival. This ‘man’ who looks like a zombie (this could actually be the first time we encounter a zombie on screen, or at least the idea of one), has been asleep for 25 years and is now under the spell of Dr. Caligari. Alan, who is also at the carnival with his girlfriend Jane, asks the Somnambulist, Ceaser, how long does he have to live. Ceaser says that Alan will be dead before dawn. This shakes Alan so he, Jane and Francis go home. By the morning Alan is found dead…

Ceaser is then ordered to kill Jane, but he can’t as he falls in love with Jane, so kidnaps her instead. Ceaser is then chased but cannot run with Jane so he lays her down (such a gent) and runs off. This is all done in a dark sadistic way and fingers are beginning to point toward Dr. Caligari. When confronted, Dr. Caligari protects Ceaser. So Francis visits the asylum to see if Ceaser went that way, and in a very strange turn of events the director of the asylum is non-other than Dr. Caligari. (dun dun derrrrr!) Francis has no other option but to call the police on Dr. Caligari. 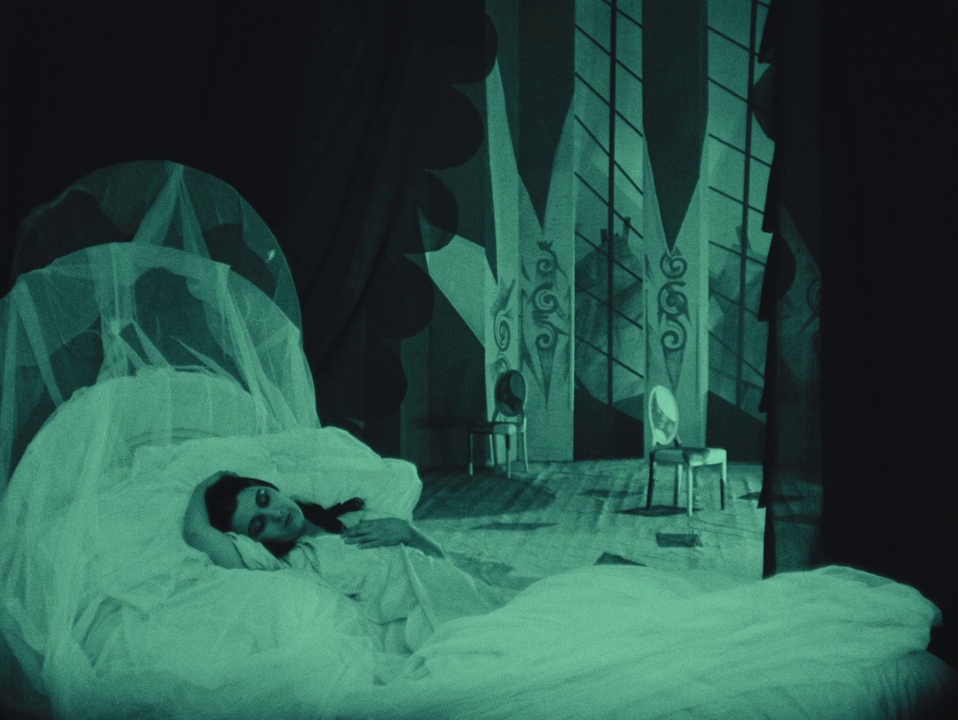 The police find Eleventh Century literature containing information relating to a mystical ritual where hypnotism is used to control people to commit murder. This results in Dr. Caligari getting committed to his own asylum. What are the odds? Then the setting changes back to Francis in the garden with his older friend. In the near distance there is Ceaser. Francis warns the older man not to ask him for any of his prophecies or he will surely die. In another shot there is Jane. Francis asks her to marry him but she refuses as he is not of royal blood. This is all becoming clearer when Dr. Caligari makes an entrance and Francis starts a fight with him but is quickly carted off by the men in white coats.

The whole movie had been a delusional episode of Francis’ and all the characters are non-other than the people around him in the asylum. The film set which is full of neurotic contorted imagery is the mind state of Francis and an extension of his psychological episodes. What is interesting is that at this time in Germany there was a big shift in the art world and it was making way for Expressionism, The Dada’s and Surrealists and these art movements where doing their best to represent the nonconformist approach. This film could have been a visual accompaniment to their manifestos. 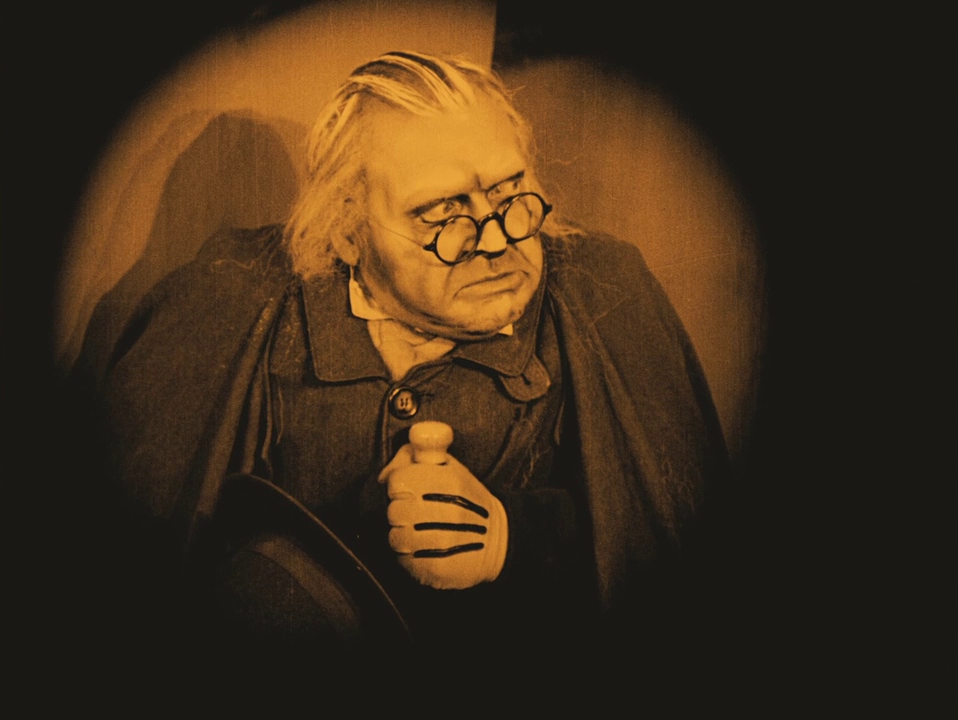 As well as being influenced by the Expressionists, etc. I would say this film had a major influence on all horror writers, and nearly a century on The Cabinet of Dr. Caligari is still influencing directors. If you watch Shutter Island, does this not have very similar connotations of The Cabinet of Dr. Caligari? Furthermore, would you say that the Wizard in The Wizard of Oz has an uncanny resemblance to Dr. Caligari? Ceaser looks like Edward Scissorhands, so with this said Tim Burton must have been heavily influenced by the settings. His genre of films could have been lifted from the drawing boards used to create this film. The list could go on but what is so clear is, The Cabinet of Dr. Caligari has unmistakeably, profoundly and impacted positively on anyone who has any tie to the genre of horror. Thus the use of the Somnambulist could be seen as a subconscious creation of the first zombie. However, I feel that Ceaser comes from the Nosferatu side of the family which can be seen in modern day Dracula films, where he enters the bedroom of females and kidnaps them.

In conclusion, this is the one and only film that I can not find a negative about, and the fact it relates to art and history, I feel it should have more acclaim than just stumbling across it. That is the most atrocious thing.