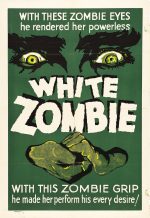 As the opening titles roll, we hear the rhythmic chanting of a coven-like group set against the sound of ominous drumbeats. The trotting of a horse-drawn carriage interrupts this strange ritual, forcing them apart. This introduces us to Neil (John Harron) and Madeline (Madge Bellamy), a young American couple on a wedding trip to the palm-filled surroundings of the West Indies who, with their pale faces and thick eye make-up, have a strikingly vampiric quality. Whilst on their romantic voyage the couple encounter the esteemed Mr Beaumont (Robert W. Frazer) who has made promises of great career prospects for Neil. The couple’s new friendly-seeming acquaintance manages to persuade them to make a stop at his residence but this generosity is undermined by his intentions to win over Madeline. In order to achieve this however, Beaumont needs to enlist the help of a quietly authoritative gentleman named Murder (Bela Lugosi) who in fact governs over the living dead. As Beaumont comes face to face with many horrors, he realises that what he covets will cost him dearly and that his desires will ultimately lead to tragic consequences. 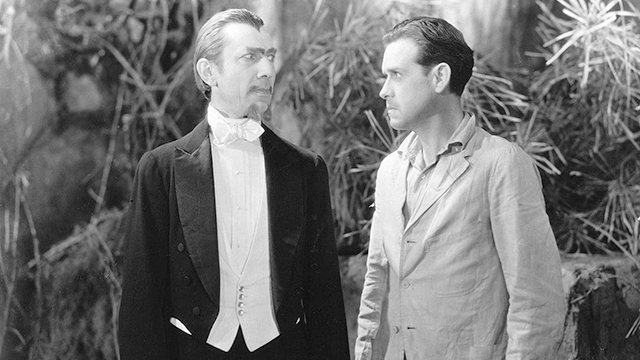 This early unwanted disturbance of the burial by the couple solidifies their status as unwelcome outsiders as they plough on across what the coachman (Clarence Muse) tells them are freshly dug graves. In White Zombie, death feels inescapably omnipresent with images of crosses, cemeteries and headstones filling every scene. In one of the most unnerving shots of early horror cinema, we see a pair of pervasive eyes peering across the landscape. What’s so discomforting about the eyes is their vacancy and the troubling inevitability that not only are they watching the couple but are also undoubtedly watching us too. Recognising these eyes from the film’s iconic poster we are instantly pulled in by the power and symbolism they represent and the timing of their appearance also leads us to question whether (as a result of disturbing the dead) the couple have awoken this fiendish spirit. 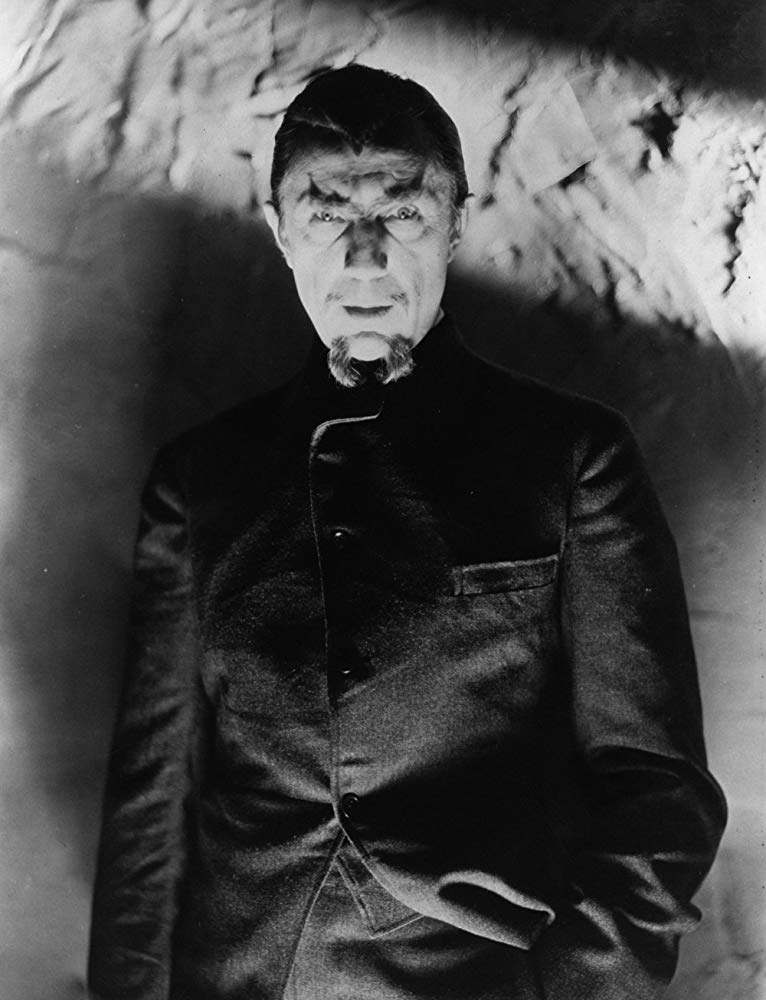 The eyes quickly shrink before disappearing completely to reveal a solitary figure stood amidst the shadows of the forest. This connection tells us that the penetrating gaze belongs to none other than the master of the dark arts, Murder (Bela Lugosi). Dressed head to toe in black, he ignores the questions of the coachman and approaches Madeline with a strange and almost floating gait that fills the empty window space before her. They exchange a quick glance before he whips her scarf from around her neck before the carriage clutters away. We then meet Dr Bruner (Joseph Cawthorn – the film’s answer to Stoker’s Van Helsing), a missionary who has been ambiguously ‘sent forth’ to perform a marriage ceremony. With cinematography that is far beyond its time there is a moment when (as they linger on the doorstep of Beaumont’s house) a softness sits around the edges of the frame, giving the impression of a voyeur peering at them from nearby. 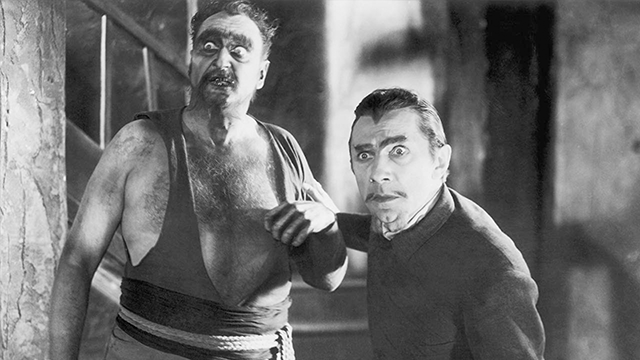 As soon as Brumer learns of their acquaintance with Beaumont, his troubling comments cause concern and create great tension ahead of Beaumont’s entrance: ‘he doesn’t seem like the type of man to go to the trouble of playing fairy Godfather to a couple like you’. To add to this suspense is the constant eavesdropping and theme of surveillance with Bruner looking down hallways before he talks and Beaumont’s manservant, Sylver (Brandon Hurst) dutifully taking note of whispers and reporting them back to his master. The couple are pointedly warned to disassociate themselves with Beaumont who we soon meet for the first time, although with its dramatic build up (and not yet learning his name) we could be forgiven for assuming that he is the strange man who stopped the carriage in the woods. Instead, Beaumont presents as a melancholic, sickly looking character who is tortured by his unrequited love. As he talks privately in his quarters to Sylver, there are mentions of: ‘that other person’ and ‘that man’ which help crank up the uneasiness once again. When met with the couple, Beaumont pays every attention to Madeline; holding her hand and discussing the forthcoming marriage preparations as though they are going to tie the knot themselves. In turn, he is dismissive of Neil, at one point even seeming to forget his existence which arouses suspicions in the husband to be. 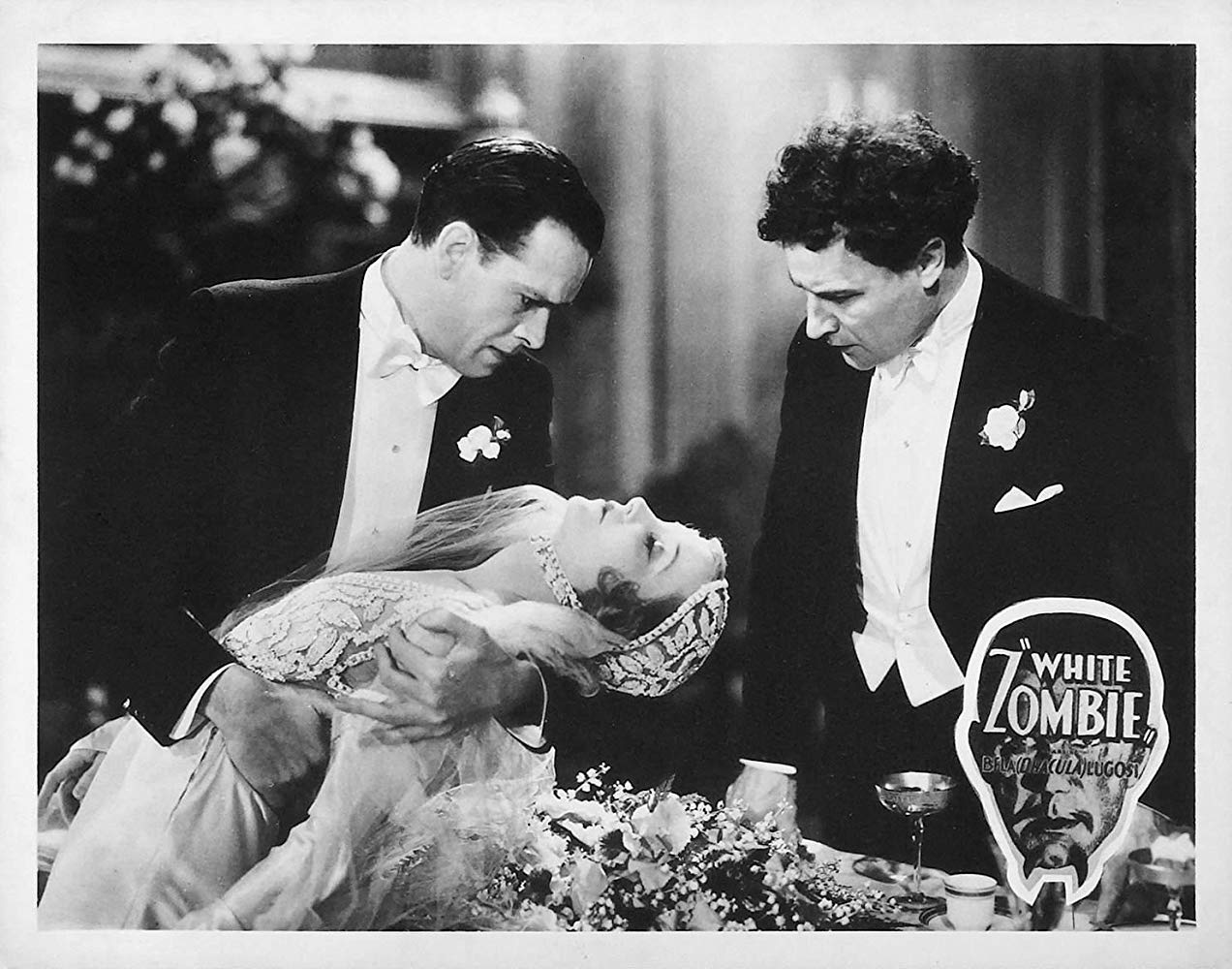 One of the film’s highlights is when Beaumont is driven off in the night by one of the living dead to the sugar mill for his clandestine meeting with Murder. The mill, we soon find, belongs to Murder himself who having procured the living dead then uses them for labour, they: ‘do not care about long hours, you could make use of them in your plantations’ he proclaims; his dealings then are if nothing else, an example of an exploitative profit-making business model. Halperin’s film is known for being credited as the first zombie film ever made and there are times when its impossible not to flash forward 36 years and think of Romero’s landmark Night of the Living Dead. However, there is a stark difference to the purpose and the representation of the zombies here: ‘they are dead bodies made for work’ says the coachman. In White Zombie then the walking dead have not yet evolved into flesh eaters; instead they are servants or better still, slaves to a burgeoning capitalist regime. 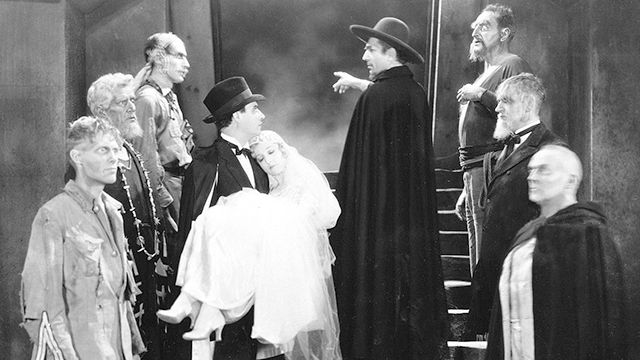 Clearly horrified by what he sees at the mill, Beaumont refuses to shake the hand offered before him, a gesture which elicits a sustained focus on Murder’s clenched fist. As they discuss the matter at hand, Murder’s power in their dynamic is first asserted by his rising above Beaumont but then offset as the visitor also takes to his feet and meets him face to face. Their Faustian pact is sealed as Murder hands him a vial, advising: ‘only a small pinpoint in a glass of wine or a flower’ is needed. The absence of score or additional sound in this scene proves to be an astute one as the relentless grinding of the wooden mechanisms creates more than sufficient tension. The role that sound plays across the entirety of the film cannot be overlooked as although subtle it is hugely affecting; whether it is with drums, chirping of birds or humming there is through the lack of score (which only becomes noticeable in the finale) an emptiness which leads to the skilful use of pauses to create suspense. These silences help to sustain the film’s genuine atmosphere of eeriness such as when Bruner remarks: ‘that’s strange…’ Or: ‘unless…’ Here Halperin is not only presenting us with uncomfortable spaces devoid of dialogue but is compelling us to fill in the gaps and imagine the worst. 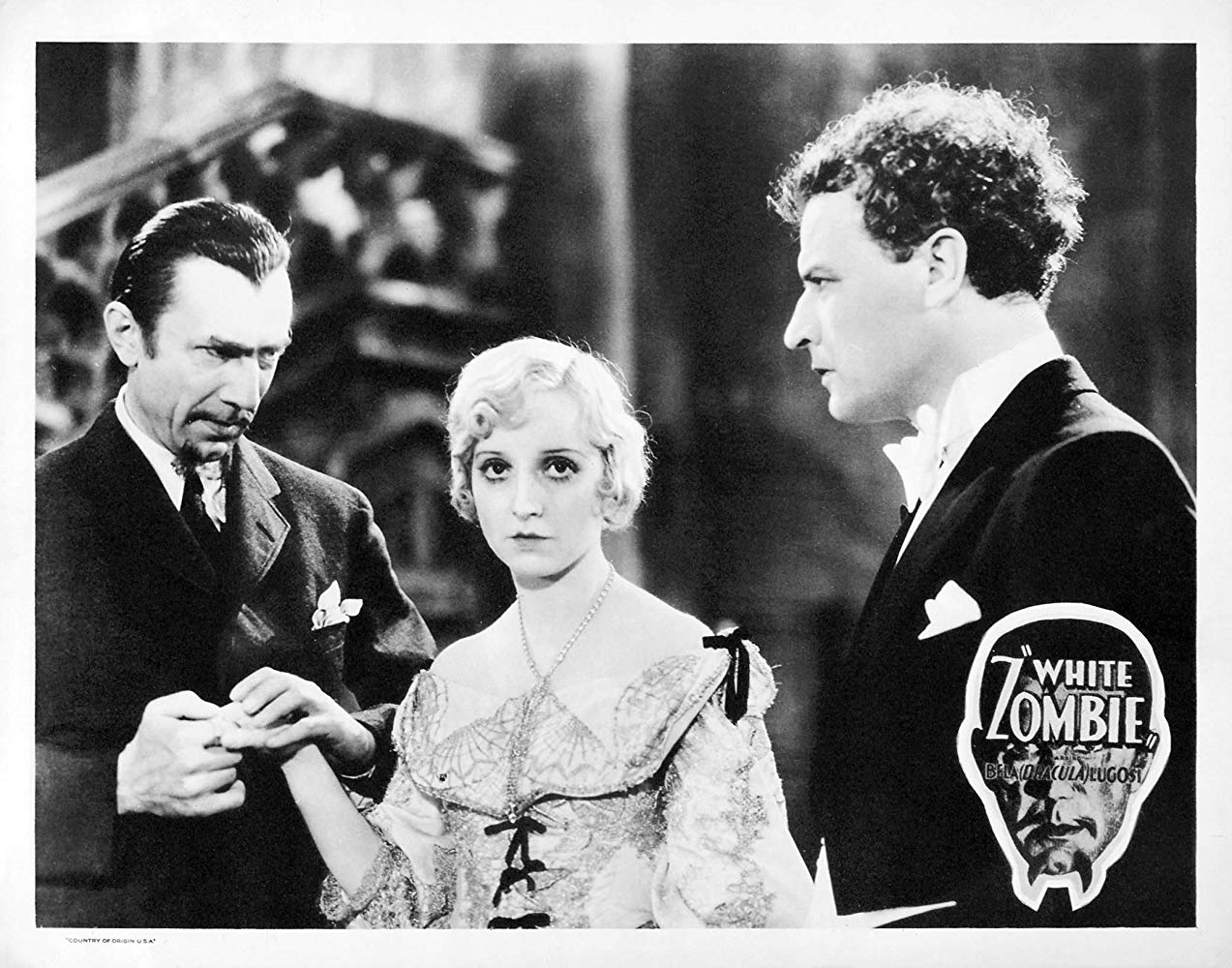 With the knowledge that Beaumont has reluctantly employed Murder’s advice, we see Madeline stare into a glass of celebratory champagne on her wedding day. As her gaze meets the piercing eyes of Murder’s she describes seeing ‘death’ in the future. What she doesn’t comprehend is that she is in fact viewing her own death which will very shorty materialize with Murder walking towards us and filling the shot. As the film’s leading female, there is regrettably not much dimension to Madeline whose heroine status is confirmed not least of all through the choice to ensure she always appears dressed in white. Bellamy’s experience as a silent film actress however, does mean that she is able to convey the intention of each scene adequately enough. Her most interesting moment, however, comes when she is seen clutching a knife over her husband, a sight that must’ve surely been shocking for audiences of the 1930s. 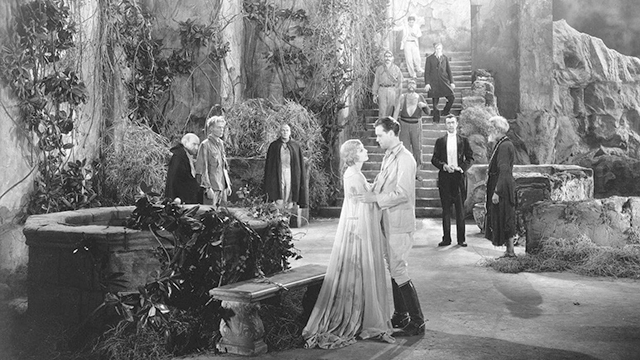 The strangely beautiful cinematography is undoubtedly the reason why this film had stood the test of time. There is an early shot of zombies marching lemming-like in small silhouettes down a hill (reminding me of moments in Jack Clayton’s Night of the Hunter, which would come 23 years later), advancing ever closer to Madeline and Neil. When Madeline is lost to the spell of Beaumont, Neil is shown drinking alone in a nightclub. Here his helplessness is emphasized by the towering shadows of couples around him and furthermore the possibility that he is slowly losing his mind is suggested by his ability to cut right through the shadows; these are not real people but figures from a nightmare. Shortly after, he is seen stumbling hysterically towards Madeline’s crypt; as he descends to discover his wife’s body has been removed, we hear a prolonged, primal scream. Sound and image work together in perfect harmony here with the yells of terror from the underground womb-like cavern feeling symbolic of the cries of a rebirth. Elsewhere, the archways, cliff edges and crashing of the sea in the final act are the epitome of gothic; our association with these locations are not redemptive but ones of terror and death. The use of split screens is also employed and despite the technique feeling quite out of place at first, it adds to the dream-like quality of the film and therefore it belongs precisely because it is so jarring and obscure. 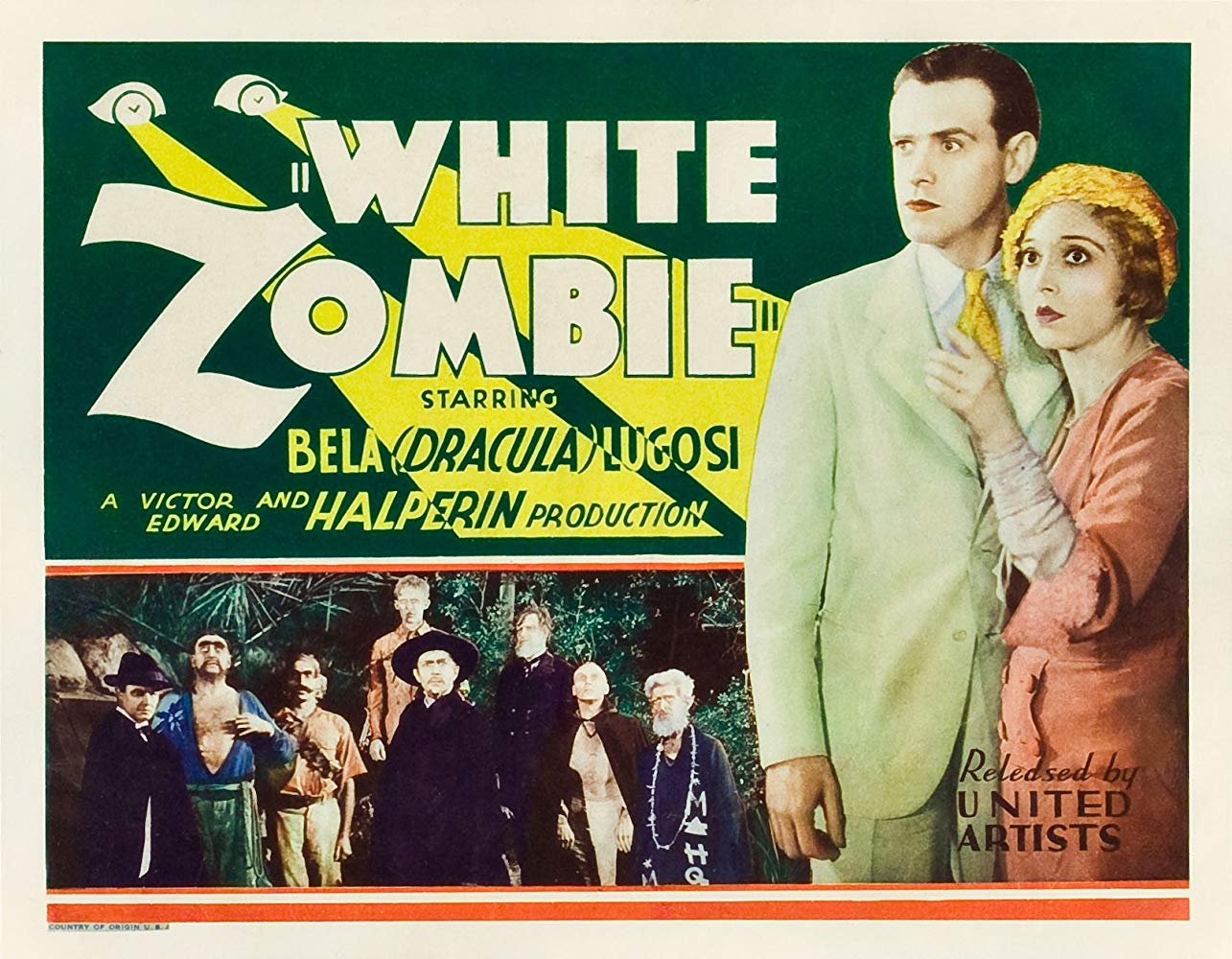 Overall, White Zombie’s most interesting relationship dynamic is not that of Madeline and Neil but of Murder and Beaumont. As they sit opposite one another while Murder revels in a new experience in which Beaumont is: ‘the first to know what is happening’ the film delivers its final and most horrifying twist of all! The entire cast seem to emerge for the finale which involves gunshots, a blow to the head and a zombie walk the plank-style parade. However, this creates a sadly underwhelming denouement to what has otherwise been a harrowingly beautiful spectacle. White Zombie is an undeniable achievement of greatness that now almost ninety years of age can still be enjoyed as one of the classics of horror cinema.