Anna and the Apocalypse (2017) | Directed by John McPhail 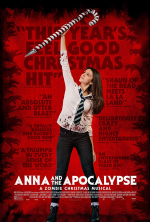 A Zombie Christmas Musical… Anna and the Apocalypse has it all, and no doubt that’s why it took 6 years to make after the release of the short film Zombie Musical. Sadly one of the writers (Ryan McHenry) died before this 2017 Scottish film was released and it never received a UK cinema run. So unless you are a fan of the genre who travels to independent festivals you may never have heard of it. But, you should do.

Take Steph (Sarah Swire) for instance. She is a foreign exchange student whose girlfriend doesn’t want to spend Christmas with her, and her family are on holiday in Mexico. Her dream is to be a reporter and she wants to run an editorial on the homeless situation; which the soon to be principal Arthur Savage (Paul Kaye) shuts down. You don’t normally see this level of depth in anything but the main character in a horror film, let alone a musical, and that is one of the main highlights of this film.

The acting is superb with Principal Savage going from pompous dictator to manic, being my favourite character as not only does his body language reflect this, but even how he sings in contrast to the catchier, more linear singing of the good guys.

As stated at the start, this is a film of many parts and each of them works for the most part. The zombies and special effects are great with plenty of gore and some really interesting fight scenes; particularly in the bowling alley which is where my favourite kill takes place. A zombie is wobbling on the bowling lane when his legs get taken out from under him with a bowling ball, and he gets decapitated by the pin swiper.

The zombies, however, are a bit inconsistent with some fast, some slow with no reason why and apparently the older ones need to rest and pee. I hoped there would be some explanation for the different zombies but sadly in both the film and the book (the latter being pretty much a cash-in) there isn’t. There are a few scenes where the zombies could have been more terrifying, but from a scare point of view, my main problem is the scene where they decide to take a shortcut. Going through the Christmas tree emporium is claustrophobic, dark and scary but I don’t see why it’s much of a shortcut… it’s more of a convenient plot point to make the film scary on the cheap.

There are a fair few comedy moments in the film with Lisa’s (Marli Siu) musical number being one of the highlights, but the best parts are the dialogue; particularly John with his lame jokes and his obsession with celebrities. Christmas is an important setting in the film within several songs, the decorations, and each character’s relationship to Christmas, but I don’t feel like this film is just for Christmas. The soundtrack for this film has a wide variety of musical styles – with some catchy Glee-like numbers, like ‘No Such Thing as a Hollywood Ending’ – which is also brilliantly choreographed to slower numbers like ‘A Human Voice’, about teenager’s dependency on technology.

Not only can most of the actors act but their singing is great too with ‘Breakaway’ about Anna, Steph and John’s relationship with Little Haven being my favourite. Not only are the lyrics to this number heartfelt, but the voices work so well together. Yes, there are few songs I’m not that keen on like ‘Soldier of War’, but the dance or fight routines that accompany many of the songs are still interesting nonetheless. There is a shortage of songs, especially catchy ones in the second part of the film, and even the comedy slowly disappears until the good guys get to the school. But, no doubt this was the plan from the writers to show how this depressing situation takes its toll. As the film says:

“There’s no such thing as a ‘Hollywood Ending’.”