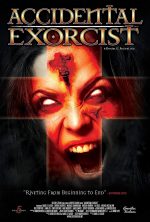 With a title such as Accidental Exorcist you’d be mistaken for thinking this movie was firmly rooted in the comedy-horror genre. I was. So it was a total surprise when on viewing that I realised this was definitely not comedy and moderately horror, more a psychological-thriller – which is fine, but very misleading.

Okay, so I now settled into what I soon discovered to be a very serious, brooding thriller about Richard Vanuck (Daniel Falicki), who’s only talent in life is successfully being able to perform exorcisms. He doesn’t enjoy his job, but unfortunately it’s the only thing he’s good at. He roams around moodily from location to location chatting to the possessed then tapping their foreheads to release them if they’re demons.

It’s extremely coincidental that there seems to be a huge amount of possessed folk in the city he resides too, which is lucky for business I guess? Unfortunately, that’s the whole plot in a nutshell. From a horror side, there’s a few foaming mouths and a snippet of blood. From a thriller side, it’s not very thrilling and from a psychological side, it’s not as deep or insightful as it hopes to be.

I’m a lover of slow-burners, but this movie is slow. The main reason for this I believe is that unfortunately, as good as the premise is, that’s it. Once you’ve seen him perform one forehead-tapping exorcism you don’t really need to see it done over and over again. I honestly thought they would intensify throughout the movie or it was building to an epic climax but it never did.

The positives are that director, writer and lead actor Daniel Falicki is very effective as Vanuck. I feel awful saying it, but he’s the only person that can act and basically holds the piece together. The look and production values of the movie are very nice also. The lighting in certain scenes are wonderful and it frustrated me as there’s obviously a good movie in here somewhere. Once again Falicki is the shining light who leads by example, but the material constructs him and he just needs a better vehicle to showcase his obvious talents.

Accidental Exorcist is in no way a terrible movie, but it just doesn’t go anywhere. It stutters along at a snail’s pace without ever delivering anything memorable. The movie is best watched as an introduction to the talents of Falicki who, no doubt with a better script, has a bright future.