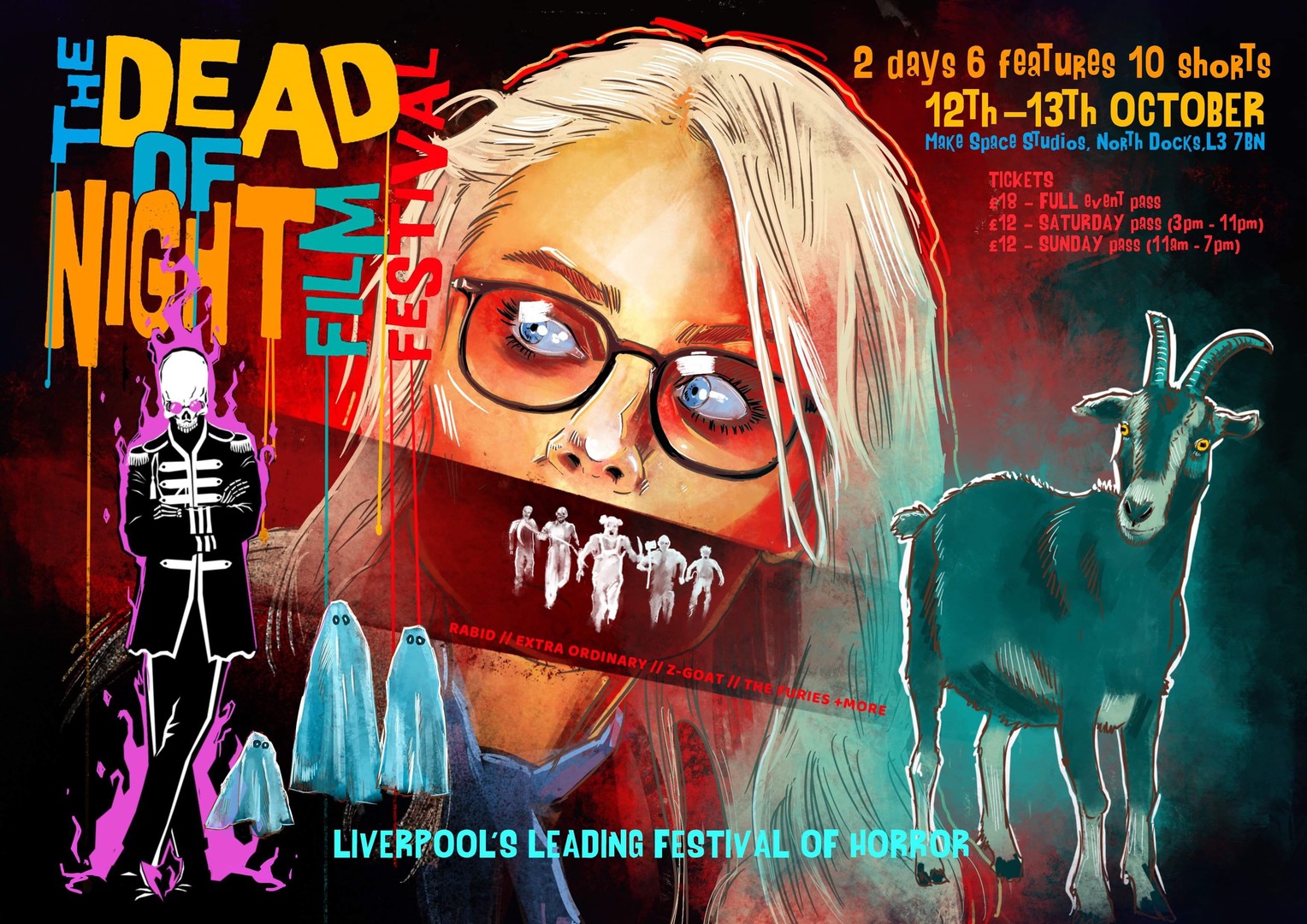 The Dead of Night Film Festival returned to Liverpool and this time there were more short films (and a quiz too!), all for the low price of £12 for the day. In total there were three feature films and nine shorts screening on Sunday 13th October, so I’ve focused more on the ones I enjoyed, but even the few I didn’t like as much were worth a watch.

The sci-fi/horror shorts as a whole were colourful, weird and had little dialogue. Z-GOAT: First Bleat didn’t end properly but the creature was an interesting design. Turbo Killer was stylistic, action packed, with a great soundtrack but little in the way of story. Eject was my favourite short film as it was strange but believable with a fable-like ending. The short is about plugging in a USB to enter your mind and you can rearrange your thoughts whilst in there. The special effects were great, in fact the only slight fault I could find in this film is the question, if you had a scar on your arm would you attempt to put a USB in it? Perhaps its normal in the story’s universe to go online into your consciousness and change yourself. I don’t know, but that’s the other brilliant thing about this short – it makes you think because you are intrigued. The ending is bloody and tragic but it also serves as a warning about how much the human mind and technology can cope. 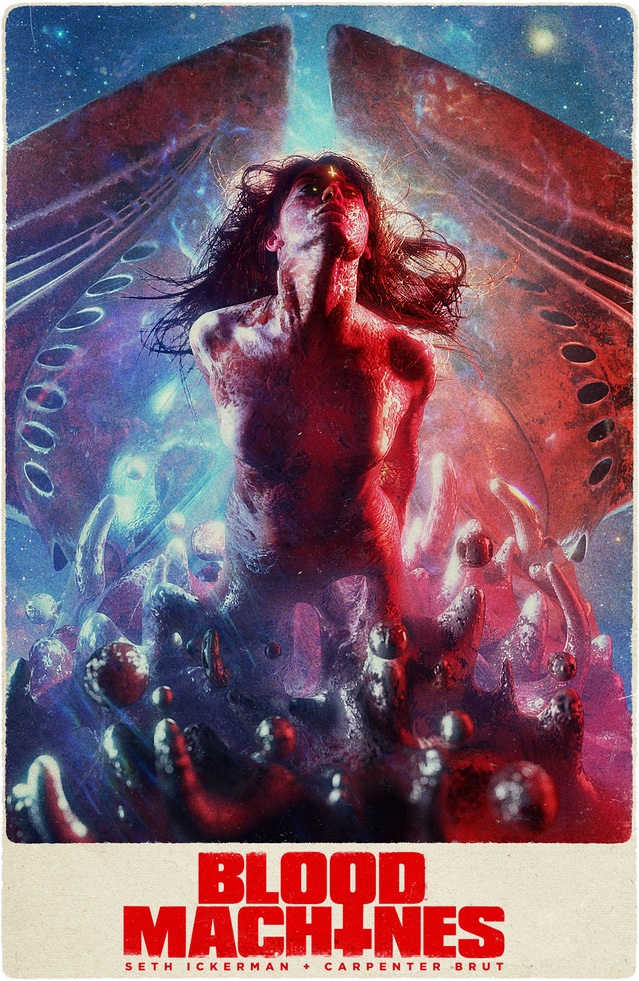 The Third Hand short had no dialogue, little story and was my least favourite. Blood Machines was very long at 55 minutes but was shot for only £100,000. For the stunning scenery and amazing ship designs you would have thought it cost a million at least. One of the ships reminded me of a mouth with sharp teeth. Unfortunately this film was style over substance with a lot of nudity, little back story, and hardly any character development. The premise that men somehow used women as machines for their ships and how a scavenger will unleash their god/ghost to get revenge was fine. The fighting scenes with the scavenger controlling the ship’s actions by moving women was interesting and came out of Turbo Killer, which had many of the same people involved.

The Three Crow Boys had a unique animation style just using shadows with a yellow background. The narration and story were good too but it wasn’t for me. The Animator was a very short, stop motion animation so a lot of effort went into it, but again it fell short for me. Playtime’s Over follows a horror obsessed kid terrorising his baby sitter like Skeletons in the Closet from last year’s festival, but it has several nods and scenarios from horror films like The Shining and Saw. The comedy is great, the acting of the two main characters is flawless, and I still don’t know how far the kid would have went to scare his babysitter. 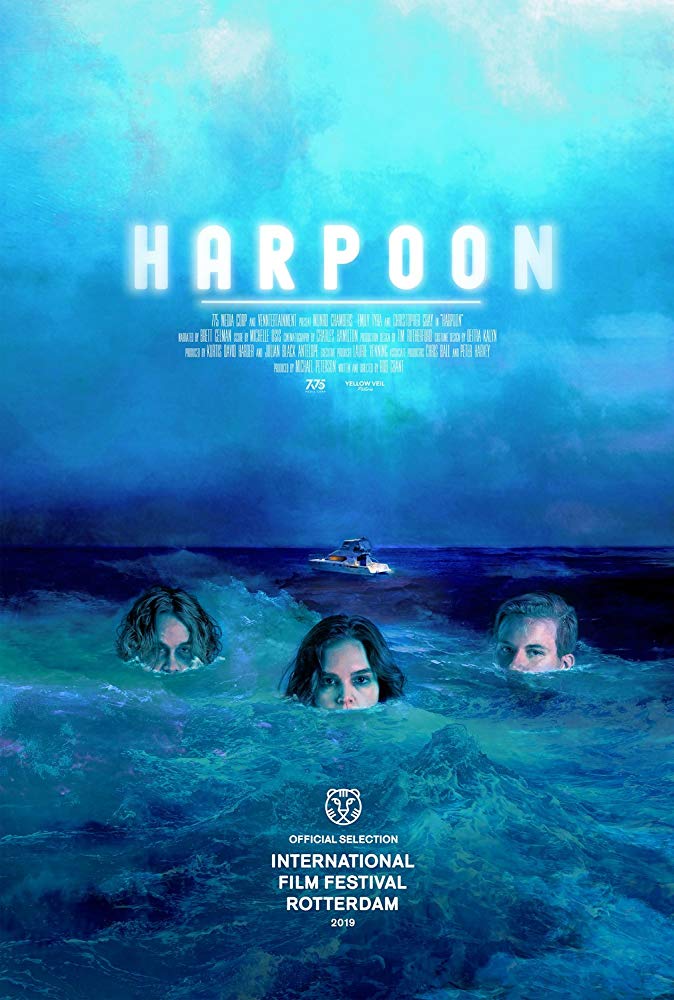 Harpoon was about a group of friends getting stranded on a yacht and discovering dark secrets about their friendships. This was probably the tensest feature film of the night and it didn’t rely on jump scares at all. The story, dialogue and acting were so realistic the filmmakers could have done away without some of the gorier parts and it would still be terrifying. What happens to Jonah’s arm though is almost as gruesome as the lies they tell each other. Final Destination 2 made people afraid to drive behind a lorry carrying timber logs… Harpoon will make people think twice going on a yacht in the sea.

Creaker was a simple short film about a girl being frightened at bedtime by a stranger. Sounds and subtlety were used very well here and the ending was strong and funny. The Desecrated follows a morgue assistant who is haunted at work. This is every bit as scary as you would expect, although I would have liked some explanation on why it’s happening. 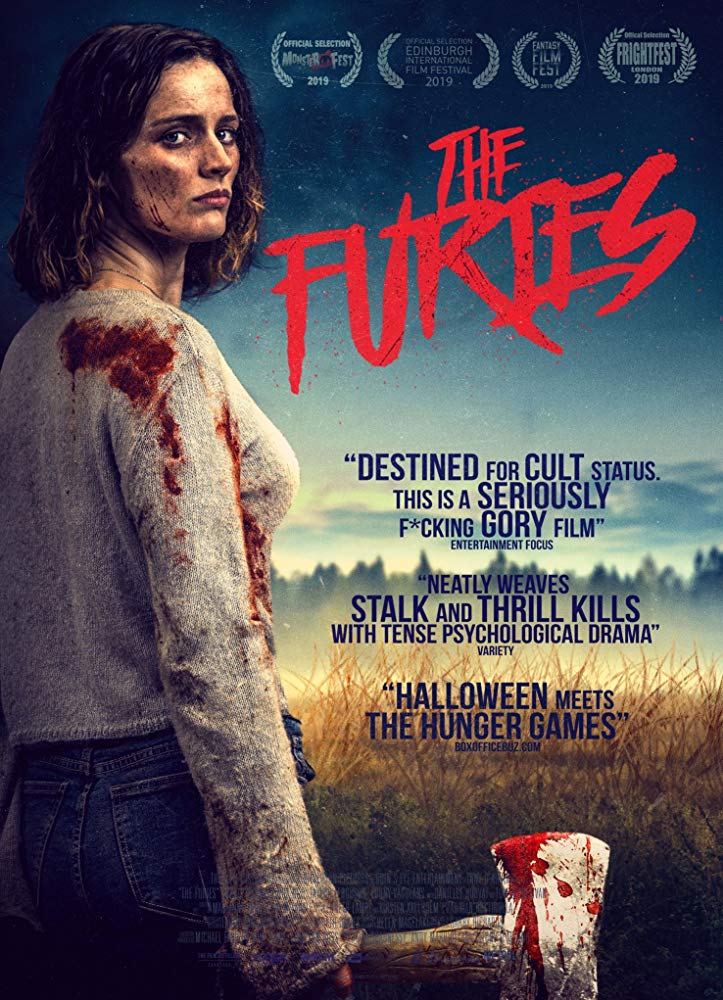 The last film I watched was The Furies, which as a feature-length slasher where men are hunting women seemed predictable when I first heard about it. This was definitely better than expected with a strong performance from Airlie Dodds in the leading role. There’s not a ton of films where the hero is disabled, and fewer still where their disability (in this case, epilepsy) isn’t the main focus. The twist that each of the murderers is partnered with one of the victims, so if their girl dies they do too is original and adds another level to the survival of the fittest plot. However, I feel there is a current trend towards high tech games pitting innocents against each other for the rich man’s game.

Overall this was every bit as great as previous Dead of Night festivals; there are strange films, tense ones and others that will make you think. Most of the films I enjoyed, and many I wouldn’t have seen otherwise; definitely not for such a good price.