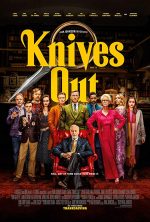 I have to admit, straight off the bat, that I’m an absolute sucker for Agatha Christie-type whodunnits, so too is self-confessed fan, writer/director Rian Johnson, as he admitted during his talk at the recent BFI London Film Festival. He certainly demonstrates his love for the genre in his spirited and inventive homage, Knives Out.

Johnson knows that half the fun lies in our recognition of the rules of the game, so he immediately provides his audience with a rambling, labyrinthine, old house in the countryside, full of curiosities and knick-knacks, a wealthy patriarch, and a large family with many secrets and veiled antipathies.

The patriarch is Harlan Thrombey (Christopher Plummer) who has made a fortune by, appropriately enough, writing successful murder-mystery novels. The morning after a family party celebrating his eighty-fifth birthday, he is discovered in his study with his throat cut. It looks like suicide, but there is no note and it seems an oddly brutal way to kill oneself.

A pair of police officers, Lt. Elliott (LaKeith Stanfield) and murder-mystery fan, Trooper Wagner (Noah Segan) come to the Thrombey estate to gather the final details, to confirm that suicide is the only explanation for Harlan’s death and to finalize the investigation. They interview each of the Thrombey family members, asking them to recount their recollections of the fateful evening. 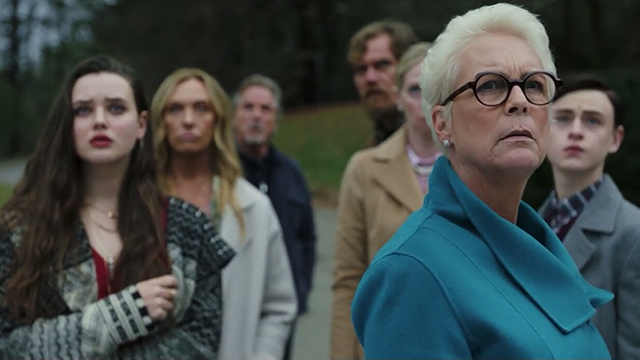 First up is Harlan’s adoring daughter Linda (Jamie Lee Curtis), a successful ‘self-made’ businesswoman with a penchant for pithy one-liners who supports her worthless husband Richard (Don Johnson). Their only son is Ransom (Chris Evans), Harlan’s high-living, mercenary grandson and the black sheep of the family.

Harlan’s son Walt (Michael Shannon) dutifully runs the publishing house that deals with his father’s novels, but their disagreements over the future of how they should publish have finally come to a head.

Daughter-in-law, Joni (Toni Collette) wife of a deceased son, is a new-agey insta-influencer with a skincare company who nevertheless has been ‘double-dipping’ daughter Meg’s (Katherine Langford) school fees. 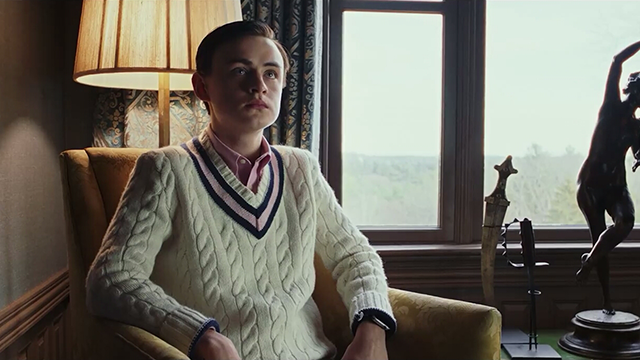 Finally, there’s Marta Cabrera (Ana de Armas), Harlan’s devoted south American nurse and his most trusted companion and confidante. She has a few secrets of her own, but conveniently, is physically sick at the thought of telling lies!

The case is on the point of being closed but for the intervention of famous private detective and Southern gentleman Benoit Blanc, (Daniel Craig). He has been employed by a mysterious client to delve deeper into the circumstances of Harlan’s death.

The challenge of discovering who has engaged him because they suspect Harlan’s death is suspicious, is a conundrum that intrigues Blanc as much as solving the murder plot. He sits observing Lt. Elliott’s interrogation of the dysfunctional Thrombey clan and quickly realises that, despite their protestations, most of the family have a clear reason to do away with the patriarch. 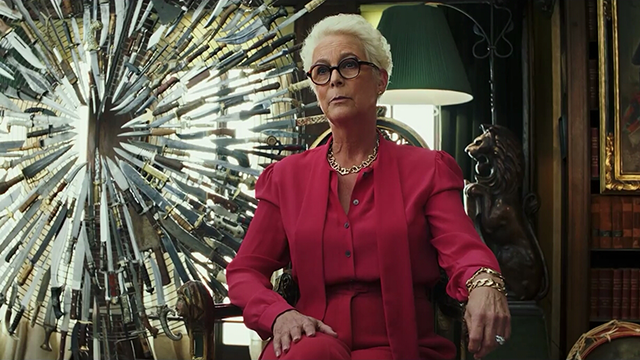 As with the Christie adaptations that he admires, Johnson’s Knives Out is chock full of familiar faces. Daniel Craig clearly relishes the role of the sleuth, making the most of his southern drawl and riffing on Christie’s portrayal of idiosyncratic detectives. In fact, all the cast seem to be having an enormous amount of fun, a mood which soon infects the audience also. After recently playing some particularly dark dramatic roles, it’s especially pleasing to see actors such as Collette, Lee Curtis, Craig, and Shannon relax and show their comedic abilities.

As I mentioned at the outset, I’m a whodunnit enthusiast, and I’m not best pleased if I find that I can easily predict the culprit by the middle of the story. To be truly satisfying, Knives Out needed not only to be entertaining, but also to be a challenge to all whodunnit-loving armchair detectives. 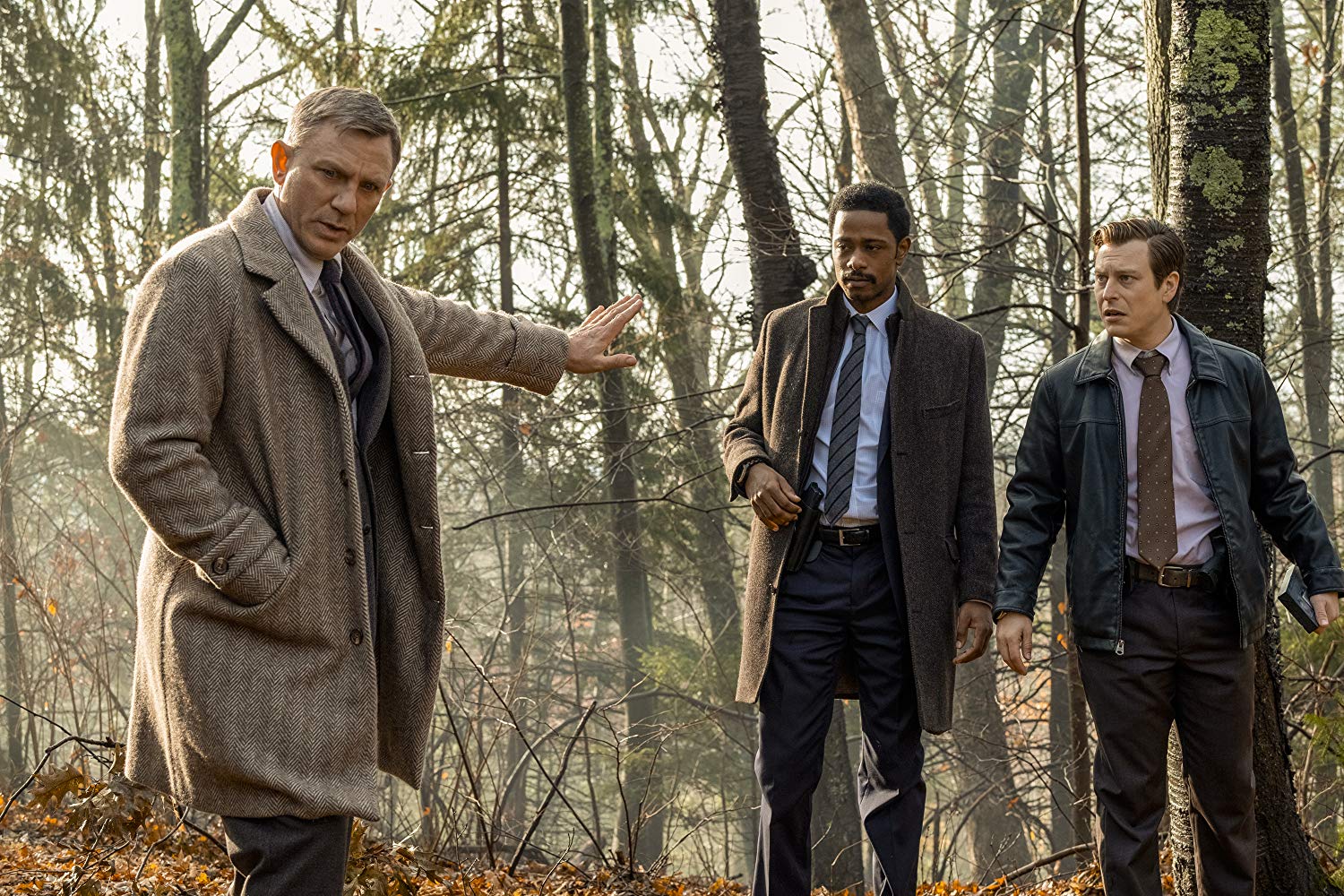 As any murder-mystery writer will confirm, it isn’t easy to work out a cunning and unusual plot. Working from his own original script, director Johnson knew he had to try hard to outsmart a shrewd audience by taking them down some unexpected routes. Seasoned whodunnit fans can be assured – there are times when you will guess where Johnson is heading, but also times when you will be mistaken, and in these days of often predictable storylines, that is a truly refreshing change.

Knives Out could have done perfectly well had it just opted to be a competent, by-the-numbers homage to murder-mystery conventions. Happily, Rian Johnson has instead succeeded in concocting a contemporary whodunnit mystery that shows love and respect for the tenets and codes of the genre, but still manages to amuse and to playfully and ingeniously subvert our expectations. This, as the young folks used to say, makes it really rather ‘wicked!’