aka The Horror Star 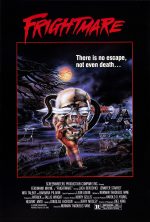 Conrad Radzoff (Ferdy Mayne) is a horror icon passed his peak, consigned to resurrecting his celebrated cinematic vampire role for a tasteless advertisement for dentures. After he dies, a group of devotees break into his neon-lit, lavish mausoleum and, in a rather misguided attempt to celebrate the life of their idol, nick his body for a farewell shindig at their place – who wouldn’t?! Unfortunately for them, Radzoff was a dab hand at the ol’ black magic and rises from the dead, seeking payback on those who disturbed him.

As slasher setups go, Norman Thaddeus Vane’s Frightmare (you may know it as The Horror Star) has a pretty good one. Bear in mind it’s 1983, an infamous summer camp has already been decimated by a certain hockey-masked motherfucker’s mother, The Springwood Slasher is about to get his shit together, and a baby-faced Jeffrey Combs plays one of our ill-fated graverobbers. Horror is in its pomp and the going is good! 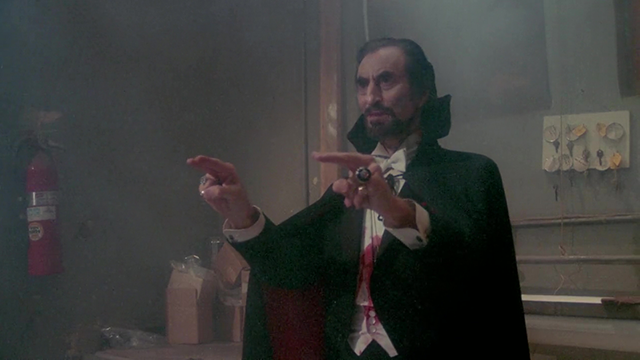 Here, Vane doesn’t always succeed when trying to make Frightmare stand apart from its more illustrious counterparts, but the fact he attempts to is admirable. From the outset the look he aims for seems more comedic, camp Hammer than American gorefest, although its style is overshadowed by a jumbled narrative that had me wondering whether I’d accidentally skipped a few scenes. It’s hard to tell how much of its absurdity is intentional, but undoubtedly the opening few chapters were created with tongue firmly in cheek, and it appears we’re in for a farcical romp. Once Radzoff is re-animated, however, it essentially becomes a serious affair, and there’s even some head-scratchingly supernatural powers to sink your false teeth in to. Who knew the undead could set people on fire with their mind?! Tired zombie-sub-genre filmmakers take note! In fact, don’t, it’s a bit weird. 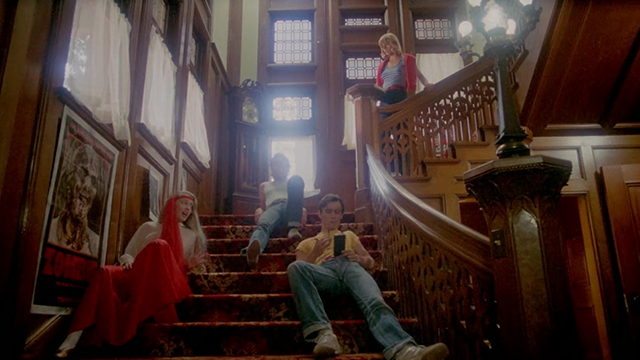 Although Christopher Lee was the original choice for Conrad, brilliant Mayne oozes the stately quality required for his portrayal of a living horror legend. Post mortem, his screen time is atmospheric and darkly entertaining, albeit a little repetitive once we get to the slasher section of the film – the kills themselves fairly tame. Unfortunately, the other characters are not really developed or very likable, plodding through a dull script towards the next set piece. While The Horror Film Society gang threatens to be a solid subplot (and allows for some excellent nods to classic genre staples), their intentions are never made clear and the opportunity is missed. However, it’s nice to be able to point out appearances from the likes of Ghoulies director Luca Bercovici and Chuck Mitchell from Porky’s, to name but a couple.

Frightmare is an odd film indeed. It’s slow, illogical and silly, yet somehow feels like it should have been a bigger cult classic than it became – worse films than this have achieved such a status. Ferdy Mayne’s performance alone is worthy of your time if you’re an 80’s horror fan.