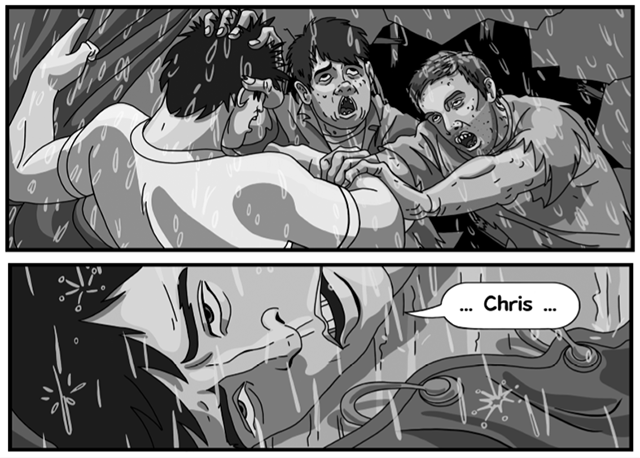 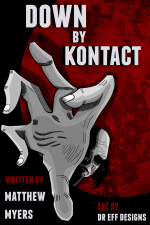 Horror comics – particularly zombie comics – were a staple diet during my college days. Every week, on the way home from another lecture, I would pop into this comic book shop called Worlds Apart in Liverpool (which still exists today, but is now owned by Forbidden Planet) and grab whatever was on offer.

Brian Pulido’s Chaos! Comics had filed for bankruptcy a year or two prior so a lot of their horror output (i.e. Purgatori and Evil Ernie) had made their way off the shelves and into the bargain bins. It may not have been a great time for horror comic publishers, but I was picking away at the carcasses; discovering wildly exciting, exploitative reading material.

I still buy comic books today – and nothing beats rummaging through stacks of them in a basement somewhere – but most of my recent discoveries are now through crowdfunding indie comics. Down by Kontact is the result of a successful Kickstarter campaign, and the brainchild of writer Matthew Myers and illustrator Dixie Filloy; a pre-Comics Code Authority-style tale of terror set in 1996, during the arcade days of Ultimate Mortal Kombat 3.

Punch Button has scheduled a Mortal Kombat arcade tournament, which our four inebriated protagonists plan to dominate! But first, they’ll need more alcohol for their inevitable victory celebrations! It was a culture they believed would never end; getting drunk, getting high, and mastering Scorpion’s six-button ‘Fatality’. And yet tonight, these four friends would soon find themselves taking on the undead; struggling to survive in this horrifying George A. Romero-style nightmare. 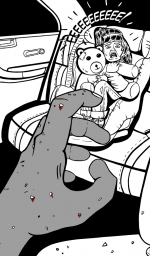 Down by Kontact – named after the rule in NFL when a runner is contacted by an opponent; the ‘K’ in Kontact a tribute to Mortal Kombat – was originally conceived as a script for a horror film Myers had intended to create in black and white; mimicking the style of 1930s Pre-Code horror cinema like Victor Halperin’s White Zombie (1932). This stylistic idea would be retained by Myers upon the redevelopment of Down by Kontact into a comic book.

Enlisting the artistic talent of Dixie Filloy (aka Dr Eff Designs) – daughter of Arthur Filloy (legendary animator of The Ren & Stimpy Show) – Myers and Filloy have found their inspiration for Down by Kontact through Romero; taking visual cues from Night of the Living Dead (1987).

Indeed, there is a panel towards the end of the comic that is an obvious homage to the opening title sequence of NOTLD. Filloy’s artistic style also displays shades of EC Comics’ The Vault of Horror and Tales from the Crypt.

Myers has also written Down by Kontact to be a mostly bloodless affair. Most deaths occur off-panel, displaying ambiguity where the mind creates something more horrific! If I have one complaint, it is that Down by Kontact took no longer than 15 minutes for me to reach its conclusion on page 36. Despite its short length, Matthew Myers and Dixie Filloy’s debut comic book is a solid effort that successfully exudes the 1930/60s horror aesthetic and creates a believable 1990s setting for its Mortal Kombat tournament turned zombie massacre.