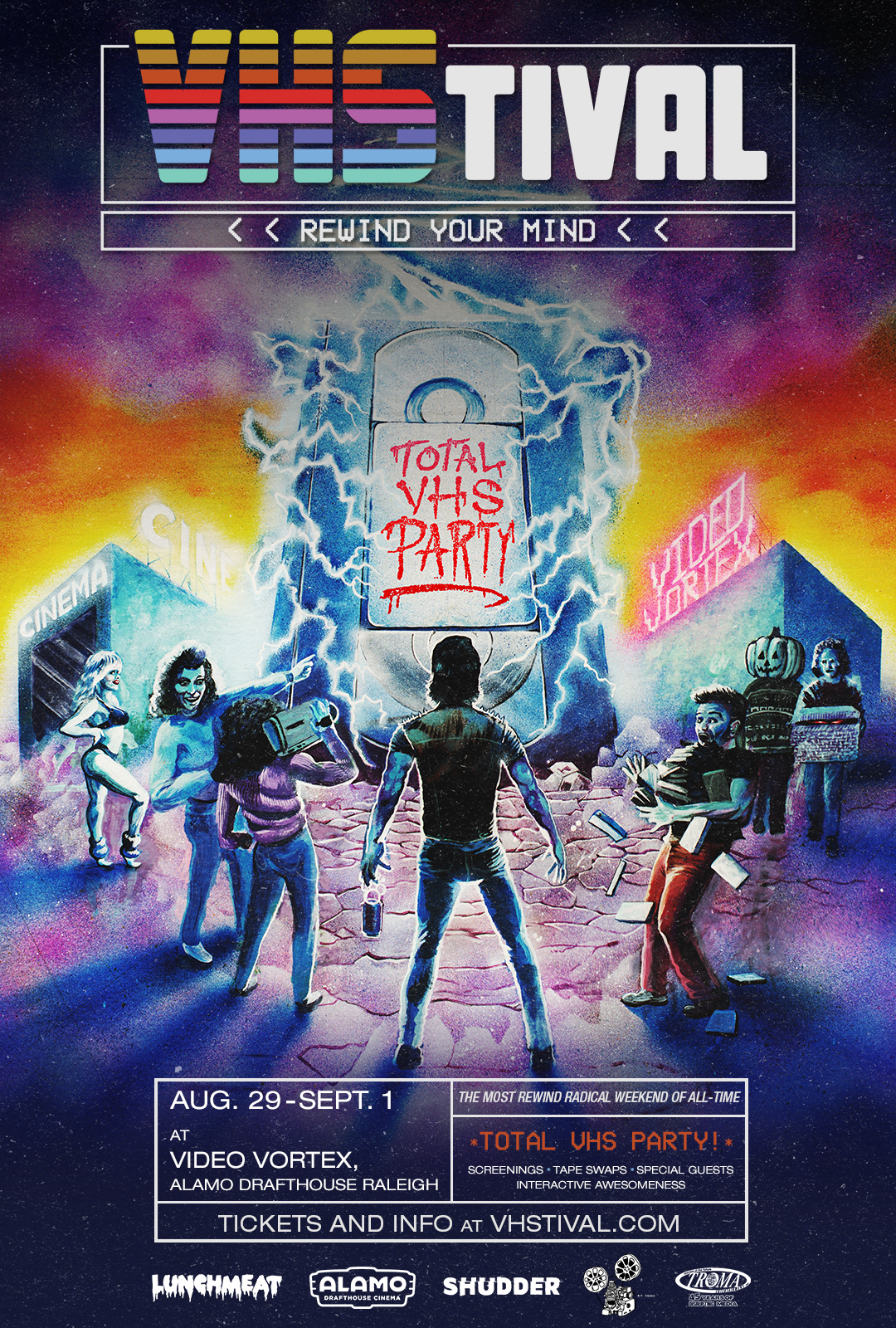 Presented by Alamo Drafthouse in association with Lunchmeat VHS, and sponsored by Shudder, Troma Entertainment, and A/V Geeks, VHStival 2019 is the most electrifying nostalgia event where filmmakers and fans celebrate the most iconic video format, all at the Alamo Drafthouse Cinema in Raleigh, NC August 29th – September 1st. Get ready for the return of the most radical rewind-inclined weekend of your life!

Fire up your VCR and join Lunchmeat VHS for four VHS-fueled, fun-filled days and nights celebrating the glory of VHS with screenings, special appearances and analog-driven events sure to soak you with nostalgia and inspire you to rewind your mind!

VHStival is coming back to Alamo Drafthouse and Video Vortex (a real live video store with over 75,000 titles you can rent for free!), with spectacular screenings of rare, iconic, and totally wild VHS-driven films, special guest appearances, and awesomely interactive VHS-centric games and events, all in celebration of the almighty videocassette!

The world’s most beloved drive-in movie critic presents over 200 clips and stills to review the history of rednecks in America as told through the classics of both grindhouse and mainstream movies. You will learn: The identity of the first redneck; Why the redneck is the scariest monster in all of film history (with visual evidence); The existential difference between Forrest Gump and Sling Blade; The reason God loves rednecks… and dozens of other historical facts that you didn’t realize you needed until Joe Bob deposited them in the rear lobe of your brain. A truly gargantuan 2-hour onslaught of backwoods wildness!

VHStival will also abound with radical VHS-driven activities and interactive events including VHS tape swaps (where you can buy, sell, and trade your way to ultimate VHStacks of video gold!), the VHSpeed Stack Challenge, and VHSink the Titanic – involving tossing copies of Titanic on VHS at an inflatable Titanic! 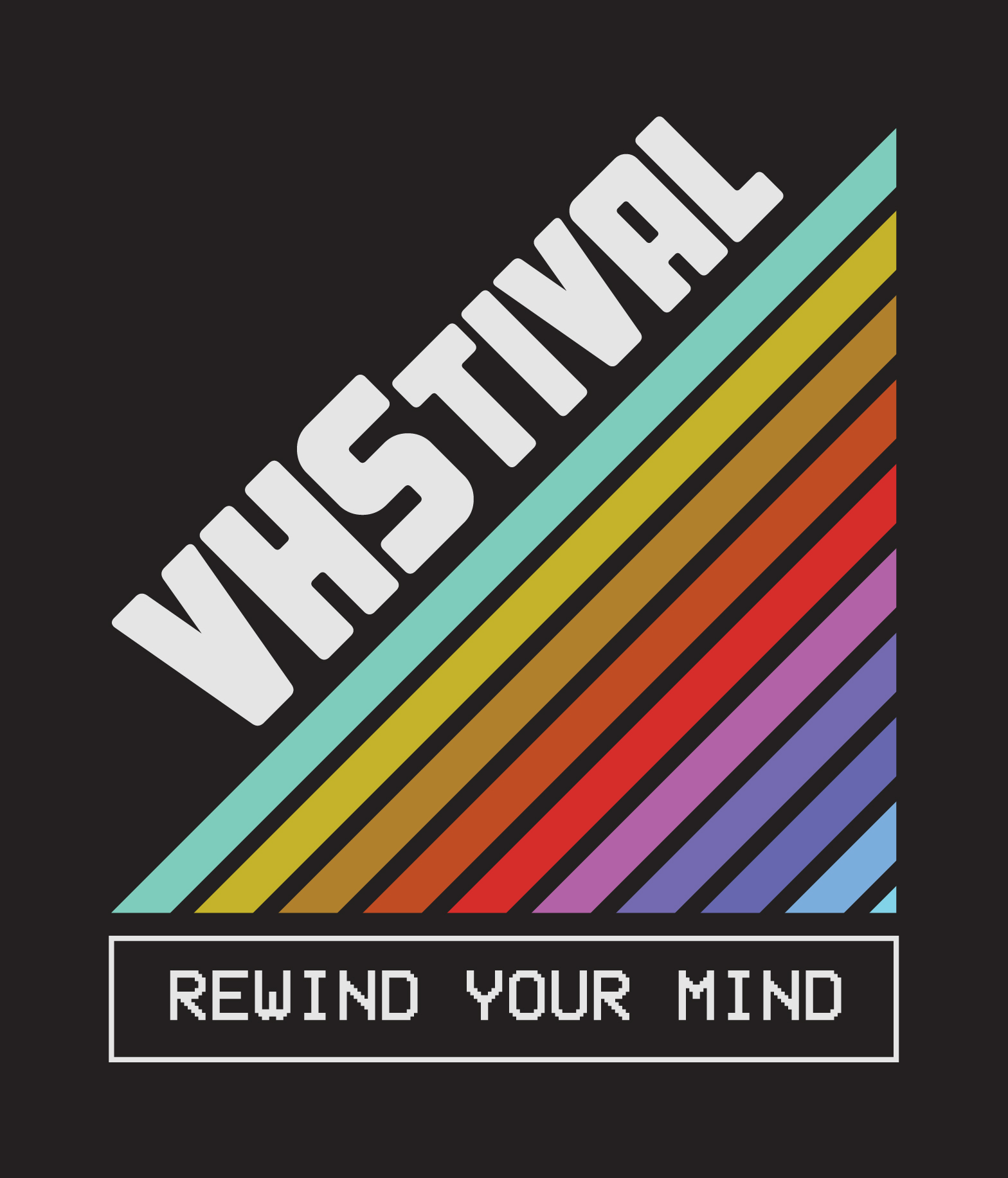 The fest will also feature Video Vortex’s signature gameshow Visions of VHS, where viewers will experience clips of the weirdest, wildest and most beloved VHS content, and then answer trivia questions about the clips for radical prizes!

Join an assembly of VHS and video store experts and enthusiasts from around the nation for the first-ever VHS & Video Stores Past/Present/Future interactive panel discussion about the influence and importance of the VHS format and video rental spaces.

VHStival will also mark the launch of Mind Rewinder – an absolutely radical limited edition, VHS-inspired beer from Raleigh, NC’s Trophy Brewing, created in collaboration with Lunchmeat VHS – and the Mind Rewinder Mixtape. Dare to experience an utterly mind-melting menagerie of clips and snips from a collection of the weirdest, wildest, and most ridiculous VHS tapes ever to invade a VCR, compiled and curated from the Lunchmeat VHS archives! A mixtape that guarantees: Once you enter the Mind Rewinder, your brain will never be the same!

Also featured at VHStival will be an interactive submission station for the upcoming book Stuck on VHS: The Visual History of Video Rental Stickers by Josh Schafer and Jacky Lawrence, to be published by Birth.Movies.Death in 2020! The station encourages attendees to bring in their tapes with the coolest, most unique, interesting, and essential video store stickers and have them scanned and photographed for potential to appear in the published book!

To cap off the event, there will be a special edition of Video Karaoke in the Video Vortex lobby where guests can perform their favorite karaoke jams, and take home their performance recorded on an actual VHS tape! It’s the ultimate retro karaoke keepsake to remind you to always rewind!

The renowned and righteous champions of unearthing the most ridiculous bits and clips from VHS, Found Footage Festival returns to VHStival 2019 with a totally awesome two-night spectacular! Found Footage Festival is an analog-driven odyssey of absolute home video insanity, complete with one night focused on the eye-popping, flesh-spewing show they have deemed Found Footage Festival After Dark! Fans of the weirdest of the rewind weird, with a twist of signature comedy commentary, these shows are not to be missed!

Entry to the Video Vortex lobby events and VHS swaps for VHStival is FREE! Tickets for the individual shows throughout the festival are now on sale via VHStival.com