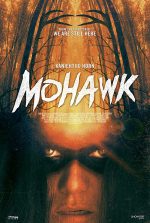 Back in 2015, Ted Geoghegan released his directorial debut We Are Still Here and took a lot of people by surprise, including myself. A well-crafted horror that didn’t follow the same old cliches that a lot of horrors do today. His follow up, Mohawk, is kind of following the same route. Not so much a horror this time, but a film that depicts plenty of horrors and a complete diversion from his previous movie.

The tale follows the events of 1812 where war is boiling over between the Americans and the British. Sandwiched in between is the Mohawk tribe who reluctantly refuse to take sides or fight. Oak (Kaniehtiio Horn), the daughter of the tribe leader, is not only caught up in the tribe’s politics, but also in a three-way relationship with fellow Mohawk, Calvin (Justin Rain), and British soldier, Joshua (Eamon Farren). Joshua is sympathetic to the Mohawk tribe, especially because of his relationships with Oak and Calvin. He’s trying to convince them to take up arms and fight against the Americans, as their main objective is only about capturing land. Unfortunately the leaders stick to their beliefs of not engaging, which prompts Calvin to take matters into his own hands by killing a group of American soldiers. 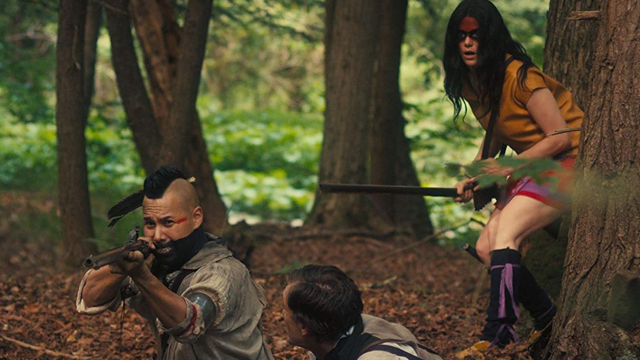 This now kick-starts a revenge narrative as fellow American soldiers aggrieved by their fallen comrades slaughter, head out in search of the threesome’s blood.

I was torn completely down the middle with Mohawk. Firstly the historical period setting is right up my street. Also not delving completely into the politics of the time and basically making it a chase-revenge movie works brilliantly. Mohawk’s cinematography and score are quite beautiful and it’s grounded, mythical, supernatural elements intertwine seamlessly. As is it’s pacing and atmosphere of building tension dealt with neatly. The lead Kaniehtiio Horn does a nice job, especially against an all-male cast. In parts, she’s quite captivating. 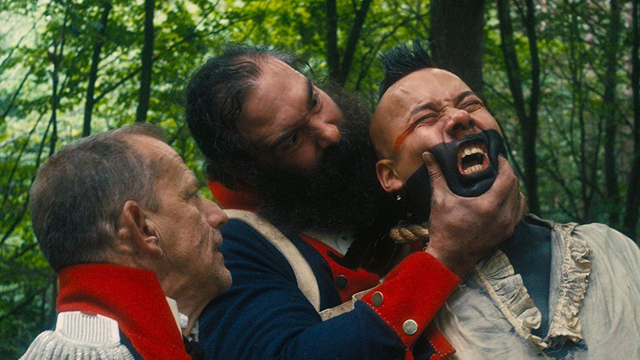 The frustrating elements of Mohawk almost hindered the overall experience for me, unfortunately. These mainly consisting of a lack of convincing performances. The American soldiers didn’t really convey threatening, but more so a caricature bunch. The lead villain, Hezekiah Holt (Ezra Buzzington), is a strange character to read and I honestly didn’t quite get him?

Obviously budget has a major influence to play with a film such as this and its scope, but I was left slightly deflated because I could sense there was an amazing movie hidden inside and I just wanted it to come to the surface.

All in all, Mohawk is extremely watchable for its lead performance and for its ambitions. There’s just enough blood and guts to satisfy fans from the horror genre and enough historical content for others.