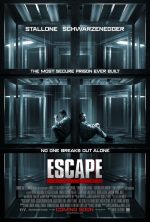 As co-owner of Breslin-Clark alongside Lester Clark (Vincent D’Onofrio, Daredevil), Breslin specialises in testing the reliability of maximum security prisons. The weaknesses that are uncovered by Breslin-Clark can then be eliminated.

Straight away Escape Plan presents Ray Breslin as a sort of quagmire; a former prosecutor turned security expert AND businessman, with expert knowledge of structural engineering. The idea is that no matter how “inescapable” a prison may seem, Breslin will find a way to break out… but his next paycheck won’t be so easy! 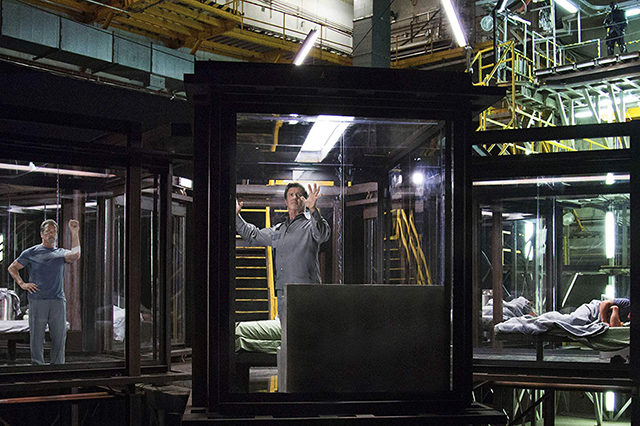 When Breslin-Clark are offered a multimillion-dollar deal to test if a prison (codenamed “The Tomb”) is escape-proof, Breslin is apprehensive. The prison is privately run and off-grid, and no information will be provided to Breslin-Clark to minimise the risk of outside help. Breslin normally relies on technical expert Hush (Curtis “50 Cent” Jackson) and love-interest Abigail Ross (Amy Ryan) for intel, but with Clark’s persistence he agrees to the deal.

A microchip is inserted into Breslin’s arm to allow Hush to track his arrival at “The Tomb”, and establish a location. But, upon Breslin’s staged “capture” in New Orleans, Louisiana, he is drugged and the microchip is removed… Now, waking up in a complex of glass cells – with no help from his team on the outside – Breslin must make friends fast if he intends to escape incarceration. 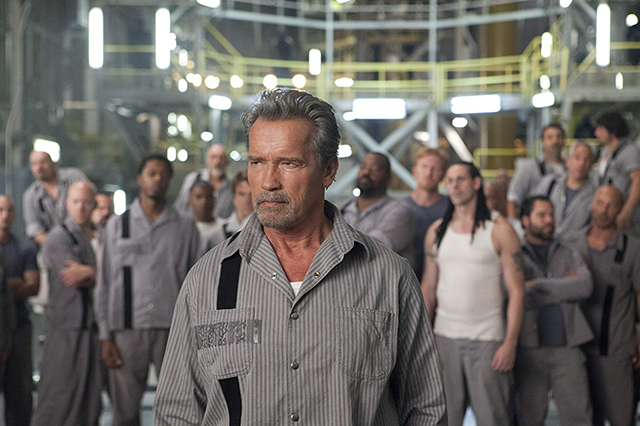 Like The Expendables 2 (2012) before it, most of Escape Plan’s appeal comes from the action dream team of Sylvester Stallone and Arnold Schwarzenegger – their first pairing as top-billed co-stars. Schwarzenegger here plays inmate Emil Rottmayer, who befriends Breslin in the hope that he too can escape “The Tomb”. And as always, Schwarzenegger has all the best one-liners!

The rest of the cast is eclectic, adding to the overall fun of the proceedings. Jim Caviezel portrays the warden of the prison; a sadistic bastard whose violent tendencies are matched only by those of his bodyguard Drake, played by Vinnie Jones. Sam Neil also makes an appearance as the doctor of the facility, proving to be a pivotal role, but whenever any focus was placed on the Breslin-Clark team (post Breslin’s incarceration in “The Tomb”) it honestly felt like filler; padding to increase the running time, and leaving the talents of Vincent D’Onofrio, Curtis Jackson and Amy Ryan underutilised. 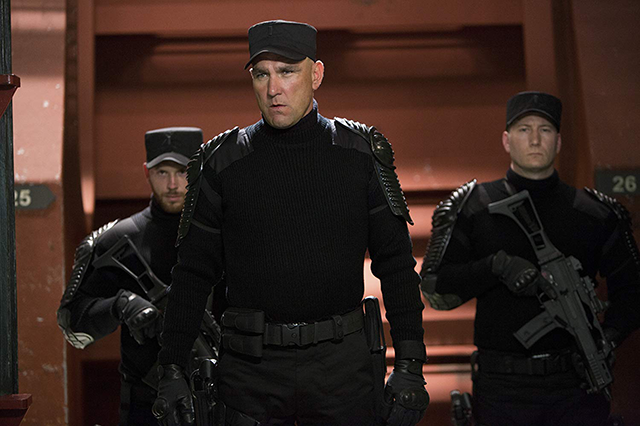 Mikael Håfström does a decent job of directing the action and suspense of Escape Plan; particularly in the third act when the film mimics the 1980s actioners that established Stallone and Schwarzenegger as the “hard men” of the industry. Escape Plan’s premise is simple but effective: Put former box office rivals Stallone and Schwarzenegger in a seemingly inescapable, futuristic prison, and watch them muscle their way out.

“This can go two ways. You let me go, and I’ll pretend this never happened. If you don’t, I’ll burn this fucking place to the ground on my way out.”

Miles Chapman’s script – his second feature film after Road House 2: Last Call (2006) – has an abundance of love for the genre, and as far-fetched as Escape Plan can feel at times, Chapman has all the ingredients for a taut thriller: likeable protagonists, despicable antagonists, dramatic tension, unexpected peril, and a hail of gunfire. 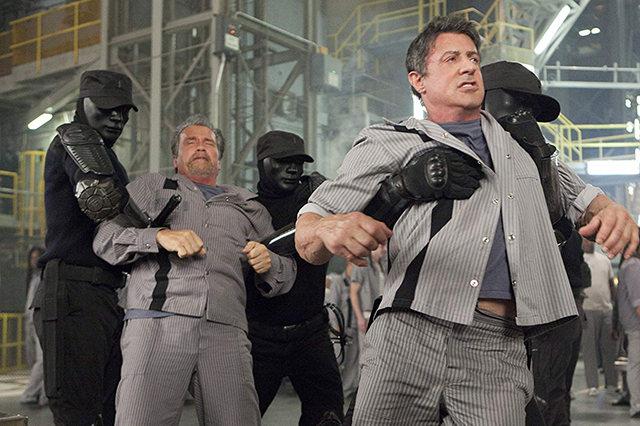 For action fans, Escape Plan doesn’t mess around with the formula that made Cobra (1986) (review) or Commando (1985) cult classics. It offers the same sort of excessive, over-the-top action that we have come to expect from the two leads: Schwarzenegger gunning down countless men with an oversized turret (ripped from a helicopter no less!), and Stallone engaging in hand-to-hand combat with every opportunity he gets!

But make no mistake in thinking that Escape Plan is anything more than a nostalgia trip. You can even imagine this film being produced in the 1980s by The Cannon Group, or Dino De Laurentiis, had Stallone and Schwarzenegger teamed up in their heyday. And yet honestly, I wish there were more throwbacks like Escape Plan. It’s self-aware popcorn pulp that doesn’t reinvent the wheel – indeed, Stallone has found himself incarcerated in Rambo: First Blood Part II (1985), Over The Top (1987), and Lock Up (1989). But most importantly, Escape Plan is a movie that both Sylvester Stallone and Arnold Schwarzenegger can be proud of, proving that the duo still have plenty of gas left in the tank.