The Nightingale (2018), directed by Jennifer Kent. 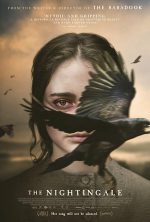 In the early-mid 19th century, British colonials claimed Van Diemen’s Land (known as Tasmania from 1856 onwards), an island off the south coast of Australia. The British used it to establish penal colonies, deporting criminals from other British-occupied lands (particularly the mainland and Ireland), assigning convicts as manual labour for settlers, the military or public works.

However, what is glossed over is the ethnic cleansing of the Aboriginal natives of Tasmania on behalf of the British military. Upon the start of colonisation in 1803, approximately seven to eight thousand Aborigines inhabited the island. Over the course of twenty-seven years almost all were killed by the army and colonists, leaving only two families.

Writer/director Jennifer Kent’s latest feature film, The Nightingale, is set in this sparsely documented part of history. This is a film where it may be necessary to know something of the history beforehand, because if you’re in my position of going into it blind, the film may initially seem confusing and shallow. You may be forgiven for not knowing this history considering its obscurity, but, in all honesty, it’s the only commendable storytelling aspect of the film. 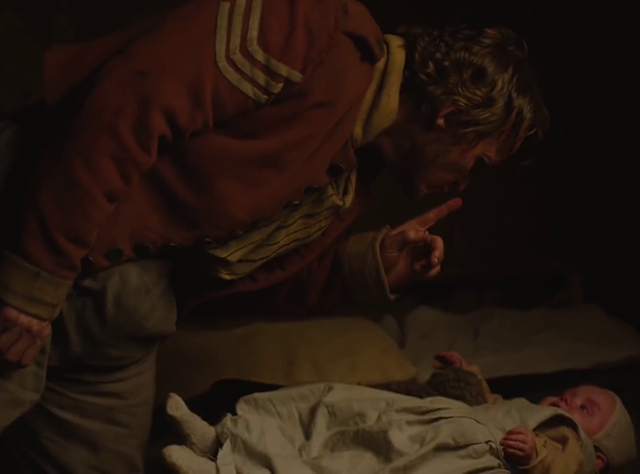 We follow Clare (Aisling Fransciosi), an Irish convict who is regularly abused by vile British officer Hawkins (Sam Claflin), eventually resulting in her husband and new-born infant being murdered in front of her while she is being gang raped in an excruciatingly long and graphic scene.

When Hawkins abandons his post due to the drunkenness of his men and journeys up north to apply for another post, Clare sets out to exact her own revenge. She brings along a native guide named Billy (Baykali Ganambarr), who she treats unfairly, going so far as to force him at gunpoint to escort and guide her up north.

Billy is the only character who prevents this film from being a period based I Spit on Your Grave, as he is responsible in informing Clare (and therefore the audience) about native Tasmanian culture and rituals. Some other members of the audience inexplicably seemed to see his character and cultural inclusions as some kind of ‘comic-relief’ – I honestly don’t think it was intended as such. 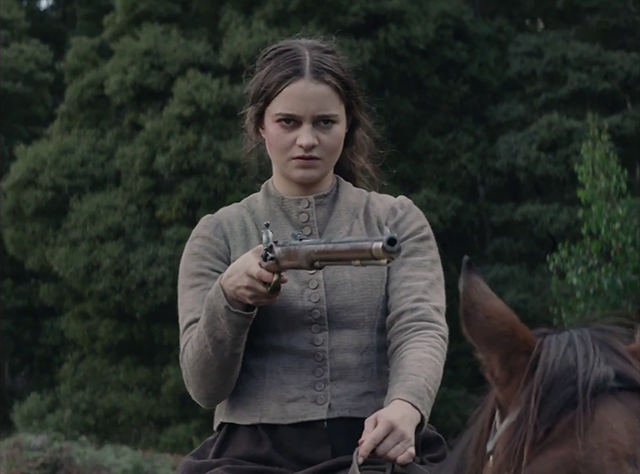 The storytelling in the film leaves a lot to be desired. After the initial rape scene, we follow the simple, repeated process of “ABCD” in structure. To elaborate, scene A follows Clare and Billy through the forest in the day, Clare getting annoyed at him for taking his time to plan a route, or maybe they anger some white inhabitants.

Scene B follows Hawkins and two of his cronies as they kill and rape the natives, pillaging their way through the country. Scene C shows Clare and Billy at night, supposedly growing closer, while Billy tells her about his culture and, in a bizarre change of tone, singing raucously in an almost-comedic manner (if we are to sympathise with the natives, then why also imply we should laugh at them?)

Scene D is perhaps the worst, showcasing a generic nightmare sequence of Clare thinking about her murdered family (the cliché ‘horror scene’ where their silhouetted faces scream “WE’RE FINE!” and she wakes up gasping).

Repeat this process about four times and you have the screenplay. This is frustrating as Kent’s script for The Babadook was phenomenal – comparatively deep and metaphorical. It should also be mentioned, without spoilers, that the scene where Clare finally confronts Hawkins is poignant and bittersweet and would have been a perfect way to end the film without resolution (as in Three Billboards Outside Ebbing, Missouri). The film plods on, however, and compromises with a conclusion that’s predictable, pandering to audiences with a ‘tear-jerking’ denouement. 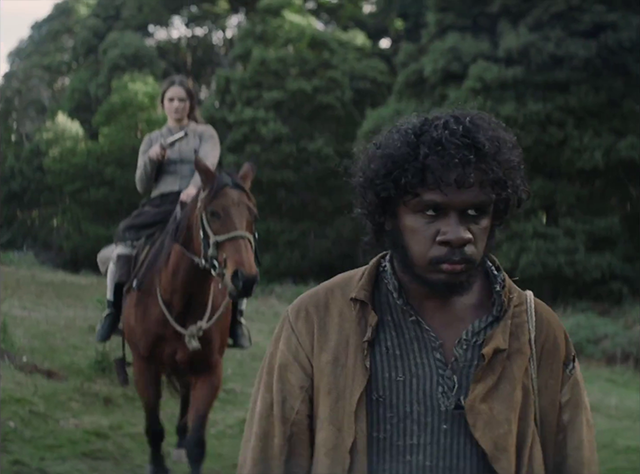 When you strip away the setting of The Nightingale, this film’s skeletal narrative and tone is reminiscent of 70s exploitation thrillers such as I Spit on Your Grave or Baise-Moi, using its historical setting to present seemingly endless scenes of graphic rape and violence similar in tone to Men Behind The Sun.

It presents several drawn-out, unflinching rape scenes, the murder of an infant, several instances of impalement, the execution of a child, a head-smashing scene and the list goes on. It seems to espouse the Gaspar Noe-esque philosophy of ‘gratuity equals drama’. Considering the film is directed in an auteurship-style by Jennifer Kent, who displayed her talent as a director and screenwriter in the exceptional 2014 horror film The Babadook, I was struck with confusion after leaving the theatre. I experienced feelings of disgust and insult, the kind of gut reaction one might get after watching superficial (but technically well-made) shockers like Irreversible or Martyrs.

The character development also sparks frustration. Hawkins, the antagonist, reminds me of Captain Vidal from 2006’s Pan’s Labyrinth, being an unrelentingly depraved and remorseless military officer. However, as Del Toro’s film progresses, Vidal is gradually revealed to be a vile character, showing him as merely a father at first, then as a brutal and heartless Falange officer. 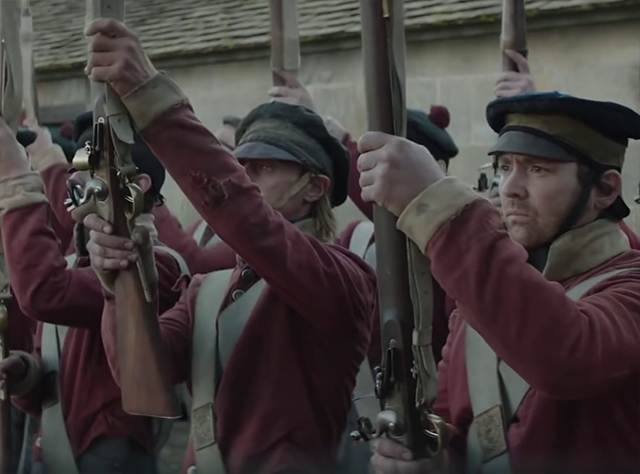 Hawkins is a character that’s unspeakably brutal from the first scene which proves to be unsatisfying and dull. It’s fine to write a character that’s all-bad, but the challenge is to make them memorable. All white men are portrayed as ‘boogeymen’, save for a young soldier (Harry Greenwood) who is forced to murder Clare’s child by Hawkins and expresses his guilt, along with an anonymous elderly man who rescues Clare and Billy from the street and feeds them, gives them a bed, then promptly leaves the story without any expansion. This appears as if it’s intending to shoehorn in a message of “not all white men!” Portraying unrepentant evil is fine as long as there’s some character development or backstory, but these villains are one-dimensional.

Regarding our protagonist, Clare – at times she behaves in a bizarre way, without it feeling natural to the character. For example, after unflinchingly shooting and bashing-in the skull of a young soldier, she gets sight of Hawkins from a position above him on a hill. Against Billy’s warning, she lowers her weapon and stands up, simply staring down at Hawkins, allowing him to shoot her in the arm before she flees.

This is followed by a later scene in the woods, where it is implied that her mind may be unbalanced by grief and violence as she waltzes alone in a dark wood laughing to herself. However, this isn’t expanded upon or appears to influence any of her later actions. 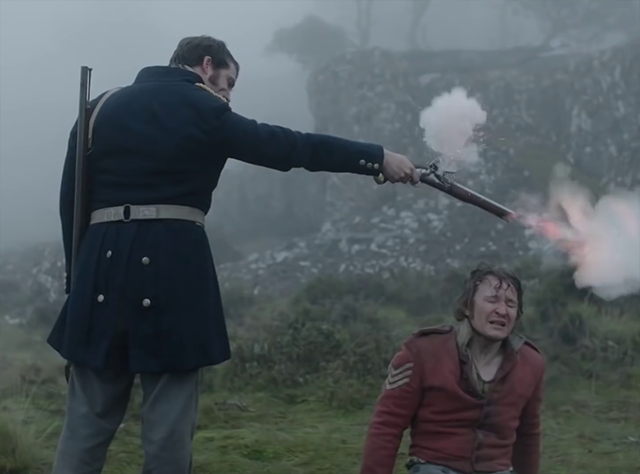 Nevertheless, The Nightingale isn’t without its positives. Visually it is fascinating, making good use of a 4:3 aspect ratio rarely used in modern films. We have a shot of the misty, expansive Tasmanian forests – with a 21:9 ratio, this would be a simple beauty-shot, but with the square-like visibility of 4:3 it becomes remarkably restrictive and claustrophobic, perhaps representing the nature of this penal colony and the confinement of the characters.

Furthermore, at its best, The Nightingale is comparable to the first half of the 1985 Russian war-drama Come and See, especially regarding the colour-palette, its reliability on static-camera angles and the use of facial close-ups, sometimes looking directly into the camera.

The framing of certain shots also piques interest, occasionally positioning characters in the corner of frame, showing them as small and insignificant compared to the rest of the image, somewhat reminiscent of cinematography techniques used in 2013 Polish drama Ida. The acting is also superb across the board, especially from Franciosi and Claflin as the protagonist and antagonists respectively. 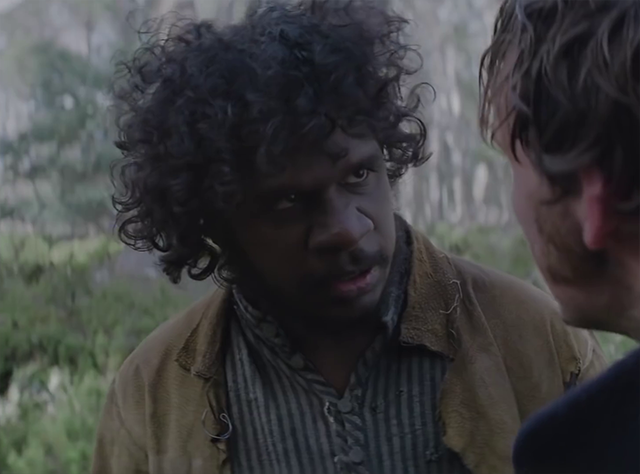 However, in many aspects The Nightingale is a derivative rape-revenge thriller under the guise of a period-film, using a lesser-known part of history and poorly developed characters, with an immature attitude to the shock-value of graphic violence.

Come and See, (a film about the atrocities and genocide committed by German forces in Belorussia in 1943) shows remarkably little graphic violence, instead implying the massacre of a village through audio-only, and the worst images we see are glimpses of the aftermath. This technique is far more disturbing and impactful in its portrayal of rape as we, the audience, must envisage the implications after seeing the reaction to such an act. The Nightingale would present us with a gratuitous, six-minute rape scene in unflinching detail. Any film can shock us by showing human depravity, but it’s another matter to make your point profoundly. Jennifer Kent has missed the mark regarding this.

The fact that The Nightingale sometimes seems to take inspiration from 70s exploitation cinema further emphasises this point. If not for the uniqueness and underrepresentation of the setting, the film might as well be thrown into the same ‘exploitation’ category.