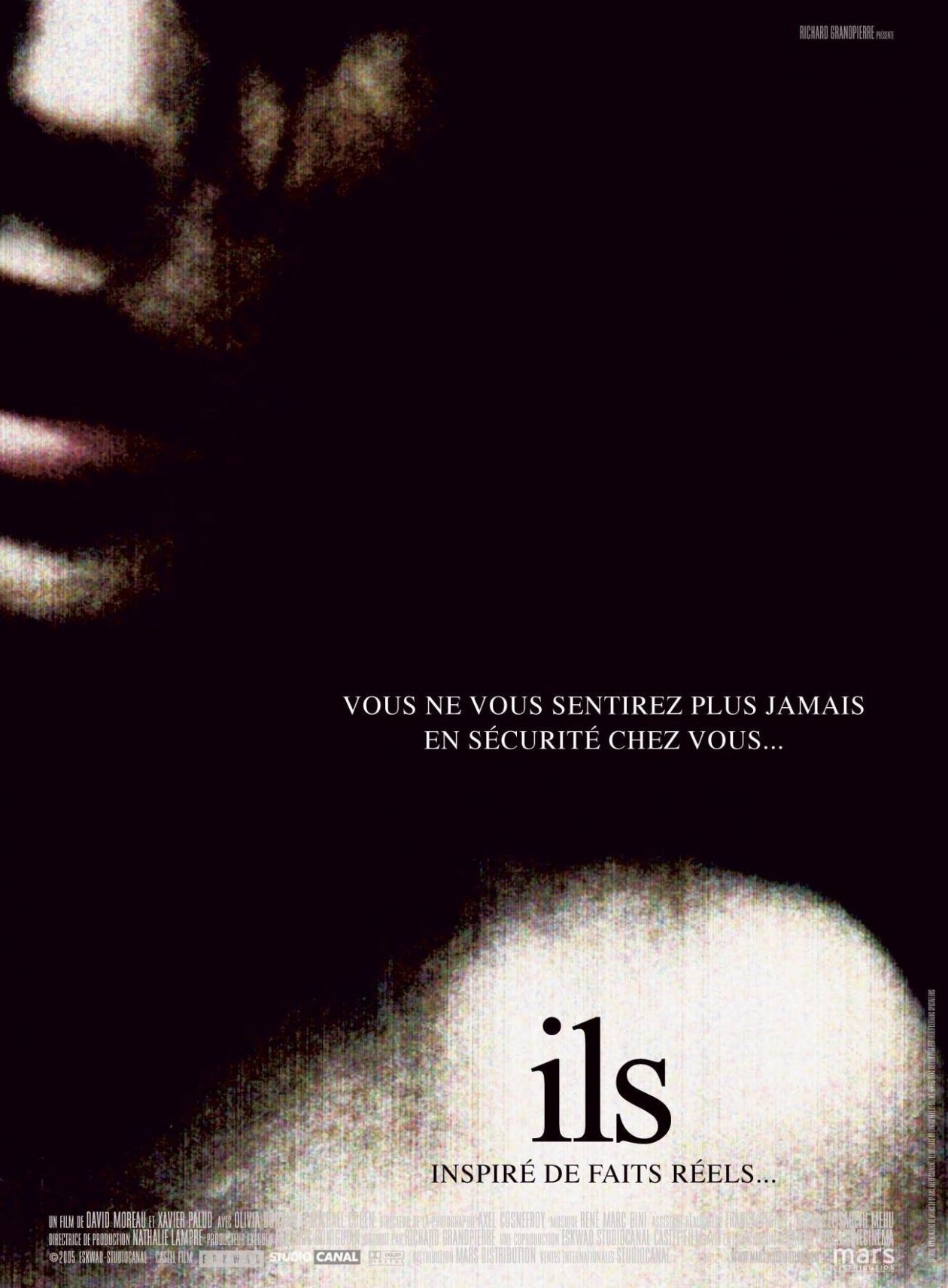 Stradling the sub genres of the new French extremity (Calvaire, 2004), home invasion (Funny Games, 1997) and the controversial, oftentimes topical subject of the young and alienated working classes (Eden Lake, 2007), Ils offers up a set of complex questions that are juxtaposed with its very simple and fast paced framework. We can all recall a time when we have been alone in our homes at night and felt under threat for some reason, even if that threat transpires to be nothing more than a creaking door or a loose floor board. In one respect then, Ils persuades us to identify closely with the young couple who find themselves under attack, a traditional and widely recognised formula of horror. What makes the 77-minute experience so engaging is that Directors David Moreau and Xavier Palud go one step further by subverting the tried and test method. They achieve this by placing a group of children (who we are naturally compelled to project and shield from harm) as the film’s perpetrators and in doing so prevent the audience from choosing an alliance they are comfortable with. 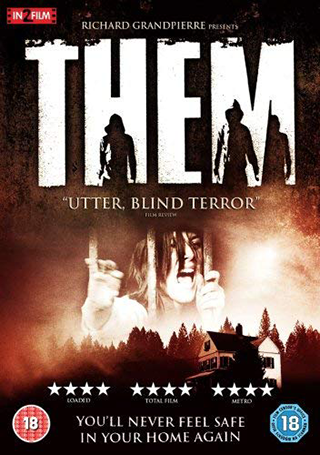 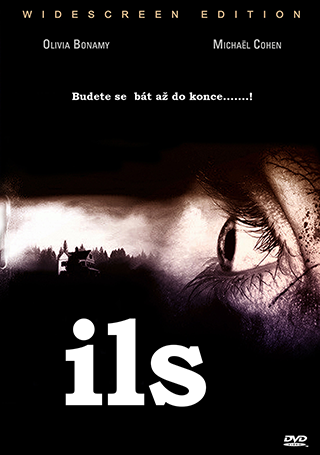 Taking a moment to scrutinise the artwork on the DVD cover of Ils (note, there are multiple versions) it becomes clear that even before watching the film, Moreau and Palud are aiming to exploit a certain set of pre-conceived assumptions they know audiences will be familiar with. There is a strong insinuation as to who we should identify as the self-titled ‘them’ and who are the intended victims. Depicting ‘them’ as ambiguous silhouettes who loom menacingly over a screaming female, the suggestion of who we should empathize with is unequivocal. To add further weight to this persuasion is the image just beneath of a house, acting as a universal symbol of a safe space. Read in its entirety the artwork promises that threat will follow but perhaps even more terrifying in Ils is that threat doesn’t have a face, it comes in the form of a shadowy hooded figure. What we don’t yet know is that this is a film which will play around heavily with our suppositions, and by the closing titles will challenge us to revise our opinion of who we now perceive as ‘them’.

Clem and Lucas are a middle-class French couple recently relocated to Romania who whilst innocently spending an evening at home find themselves under attack by a group of hooded strangers that later transpire to be children. Ils purports to be ‘based on real events’ a strategy that many horror films employ in order to illicit a more profound sense of dread and tension, forcing an audience to consider that if such awful event has happened to someone else, this also means it could happen to them.

With this foreknowledge, the viewer tiptoes into the film’s opening with a sharpened intake of breath which must be held onto tightly whilst the precursory scene takes place. We are shown a short interaction between a middle-aged woman Ilona and her teenage daughter, Sanda who are driving along a deserted road at night. As the scene unravels, we witness a recognisably realistic exchange, confirming an evident distance between the pair. Ilona tries to persuade her daughter into speaking (on the phone) to her father but despite her urges Sanda responds with attitude, preferring to focus on her make- up as she snaps at her mother: ‘I’m busy’. The degree of misunderstanding in their relationship is palpable and there is an obvious battle for power taking place that sees Sanda triumphing as she threateningly declares: ‘what are you going to do, punish me?’ followed by a stilted silence. The parent can no longer exercise the same degree of control and authority they once held and what’s more, their children know it!

Ilona is unsuccessful at regaining her position as she can only manage a weak response: ‘what’s with you, why are you like this?’, proof that she feels alienated from her daughter and cannot come to terms with her behaviour. This tone of disbelief and disconnect from reality echoes a later comment that protagonist Clem will make during the invasion of her house when she remarks: ‘this can’t be happening’. As the mother / daughter argument escalates their car suddenly crashes, a warning metaphor of how events might evolve if a dissociation akin to their own continues to manifest within the wider channels of society at large. Ilona steps out of the car in an attempt to restart the vehicle and Sanda takes the driving seat; representative of a new generation gaining control. What Sanda is not aware of is that both she and her mother are just seconds away from being murdered by assailants that are a number of years her junior as people drive by oblivious to the incident. Thus, at the demise of mother and daughter the curtain goes up on Ils and with over an hour still to come we become acutely aware that this is not a film that will allow us to settle back comfortably.

The Outsider Moving In

The film’s central narrative begins with a shot of doors springing open widely followed by children bursting out, running freely and happily down a corridor. This is the French Junior High School of Bucharest and it’s poignant that Moreau and Palud move into the main action of Ils in such a way as this reinforces societal notions that children should be carefree and innocent. We then meet Clem, a teacher whose class of Romanian students are not skipping about merrily but instead rooted at their desks whilst paradoxically being told by the French speaking adult that joy comes when you are permitted freedom. In time, the class are dismissed and we soon learn that Clem has only recently started as she laments not being able to speak Romanian as fluently as her colleague can speak French. They discuss how the newcomer is coping and Clem comments that at times she finds it a challenge, to which her colleague asks: ‘are they really that bad?’ This difference in opinion reminds us that Clem is an outsider coming in who needs to make adjustments to her attitude and approach if she is to navigate her new environment successfully.

On the surface, Clem’s world appears perfect; she is beautiful, has a steady job and a partner who makes no bones about ‘wanting’ her. As an audience will be all too well aware, what seems idyllic from the outside is often fragile and fragmented once you pull back the flawless exterior. As she drives away from school at the end of the day, we see Clem move through highly traditional surroundings towards a dreary looking industrial landscape that projects a distinct working class feel. The backdrop soon begins to revert to something more scenic and charming as she approaches the end of her journey home but before she does, in a moment of ironic foreboding, she passes the crime scene of the film’s opening.

Next: There’s No Place Like Home: Class, Conflict and Violence in Ils (2006) Part 2: The House As A Safe Place