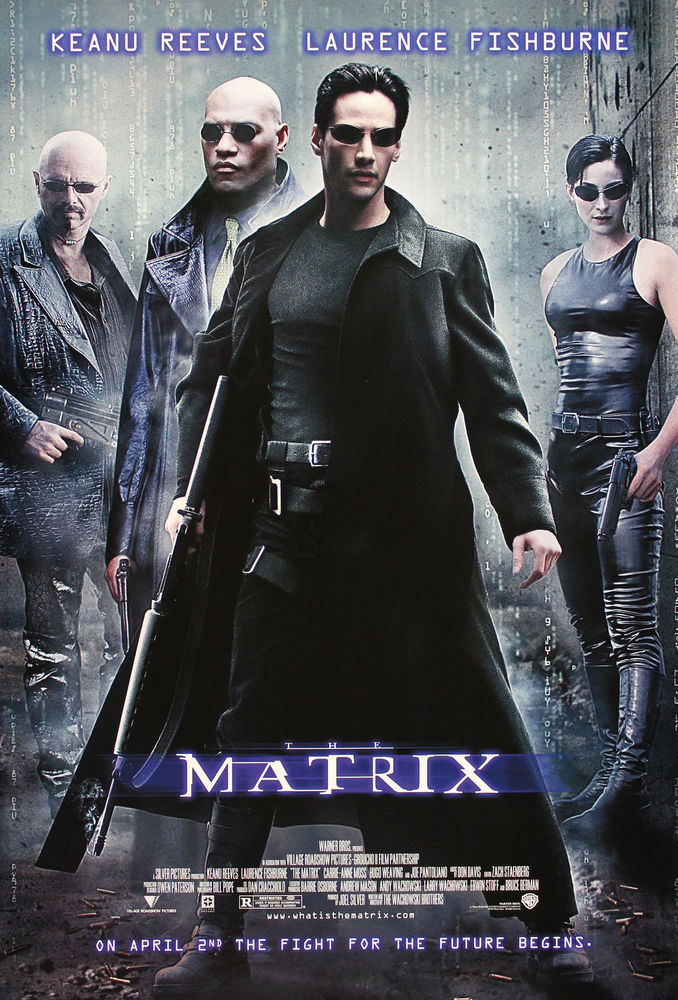 It’s a truth universally acknowledged that The Matrix is a great science-fiction movie, but there is more to it than that. For its 20th anniversary I’m going to take a look at all the elements that made The Wachowski’s movie such a cinematic milestone and how it raised the bar for all subsequent genre movies.

When The Matrix was released in 1999 it opened up new vistas of imagination in screen science-fiction – a domain of cyber existence that no film had yet explored. It was a sci-fi movie that changed the genre. It probably changed several genres and was, in fact, a movie that changed film-making in general. The Wachowskis, who wrote and directed the film declared:

“Our main goal with ‘The Matrix’ was to make an intellectual action movie. We like action movies, guns and kung fu, but we’re tired of assembly-line action movies that are devoid of any intellectual content. We were determined to put as many ideas into the movie as we could.”

The movie they created appears to be a sprightly amalgam of cultural elements, from the Bible through sci-fi stories, graphic novels, Japanese animation, music videos to Hong Kong kung fu films. Their cinematographer, Bill Pope, shared their love of comics and had started his career filming music videos for artists such as Metallica and Sting before going into sci-fi movies.

The Matrix also drew on major tropes of literary science-fiction created by writers such as George Orwell, Philip K Dick and William Gibson, featuring a dystopic, machine-dominated future populated by industrial behemoths who have subjugated humanity.

All this overlaid an earlier, more mythic structure – one dealing with the lone hero who saves his people using extraordinary abilities and insights, found in fables such as Beowulf and St George and the Dragon. This triumph, however, often comes at great cost.

The primary cultural archetype is of course, the Christ-Messiah figure – an extraordinary individual, but one who is outcast, saving those who trust and believe in him, betrayed by a companion and punished by those in authority.

Keanu Reeves plays Thomas Anderson, a computer programmer by day and a hacker by night who goes under the name of Neo. Like the original Star Wars, The Matrix is at core, a messiah story filled with Judeo-Christian allegory. Neo (an anagram of One) is thought to be the ‘second-coming’ prophesised by ‘The Oracle’ (Gloria Foster) to free mankind from enslavement.

He is sought out by Morpheus (the ever-elegant Lawrence Fishburne) who appears as a kind of John the Baptist figure, and his crew: Trinity (Carrie-Anne Moss) a clear allusion to the Holy Trinity, who soon takes her place as Neo’s ‘Holy Ghost’, inspiring him with belief and strength and at one point reviving him with a life-giving kiss, and Cypher (Joe Pantoliano) – a nod to Lucifer but here playing the role of Judas the betrayer.

The Balance of Power:

With the help of this group of renegades, Neo discovers that the life he has been ‘living’ is merely a computer generated illusion created by machines to dupe human beings into passivity, believing they are living in the world of 1999.

Neo’s explicit birth from a biotechnical womb spits him out like a new-born infant, blinking, hairless, and covered in mucus, as around him he sees millions of enwombed humans plugged into the Matrix’s mainframe and functioning as organic ‘batteries’ now that a solar source of energy is no-longer viable. (The humans had ‘scorched the sky’ in the hope of stopping the machines, but in doing so sealed their own demise).

In the virtual prison of the mind that is ‘The Matrix’ of the title, human beings are maintained in a permanent dream state, unaware that they are being used as a mere biological fuel cells. Thomas Anderson awakens from his illusory life into the ‘real world’ of 2199 – a dismal, long-decayed environment of ruined cities and a blighted atmosphere, where the last free humans have sought refuge from their mechanical overlords in an underground city named Zion.

The balance of power has long been subverted. While we think we control technology, technology in fact, controls us. This is one of the underlying messages that the Wachowskis present throughout the movie.

The Desert of the Real:

In one of the first scenes, Neo goes to a bookshelf and takes down a copy of French philosopher Jean Baudrillard’s Simulacra and Simulation. Ironically, the book itself turns out to be a mere shell, a container for computer disks containing illegal software. It’s the first clue to Neo’s preoccupation with the real and the unreal, with fakery and the difference between appearance and reality.

Baudrillard’s main idea was that in the postmodern world the real has been displaced by the simulated. He claimed that the real survives only in vestiges, “here and there in the deserts…the desert of the real itself” a phrase later borrowed by Morpheus.

For those viewers who have not read Baudrillard’s work (which is probably most of them) The Matrix also presents variations on the theme of the real versus fantasy by referring to other works of literature where we see this opposition, namely Lewis Carroll’s Alice in Wonderland and Frank Baum’s The Wizard of Oz.

One of the reasons for the enduring appeal of The Matrix is the fact that it never insults the viewer’s intelligence. Does its attraction lie in its form as a Buddhist allegory built upon a Judeo-Christian foundation? Or is it more to do with the protagonist’s ability to walk up walls in stylish patent leather and kick butt in slow motion while pulverising the masonry? Clearly, it has to do with the successful combination of both.

Interestingly, the brothers cast Keanu Reeves as Neo. Often criticised for his apparent lack of emotional range as an actor, Reeve’s passive beauty and international background (his heritage is a mix of Chinese, Caucasian and Hawaiian) worked well as a universal everyman, thrust into a fantastical scenario. He is the perfect postmodern poster boy, he does not distract but instead integrates with any environment. Reeves is also known to be an incredibly graceful and hardworking physical actor (he’s still proving the fact into his 50s, as John Wick) which all played well into the demands of the ‘Neo’ character.

Despite its overt allusions to highbrow contemporary philosophy, The Matrix became a huge box-office smash. It successfully married science fiction with conspiracy thriller conventions and spectacular martial arts action scenes (the actors worked daily for 4 months with the legendary Hong Kong martial arts choreographer Yuen Woo-ping). The movie also became famous for its ground-breaking digital techniques but, on another level, also as an intriguing intellectual mystery to be decoded.

Examining The Matrix’s digital effects and how they were achieved, shows how the film represents a melding of cinematic techniques and video games. We recognise ‘bullet-time’ as a response to the challenge presented by the immersive experience of video gaming which was becoming prevalent in the late 1990s.

Shot from the observers’ point of view the optical perspective swoops through 360 degrees in a 3D space, without revealing all the film making paraphernalia and apparatus (we could be inside the world of Zelda, but with better graphics).

Not Just the Real but ‘the Reel’:

Although they ultimately cut their own cameo appearance in the movie (as window cleaners in the Meta Cortex building) the Wachowskis underline their controlling presence. They highlight the art of the film and the manipulation of the viewer by the technology that delivers a different perception of reality – they make it clear they’re not just dealing with the concept of the real but also of ‘the reel’.

The Matrix was THE end-of-the-millennium movie, a statement of the Zeitgeist, and a template for the future of big-budget Hollywood filmmaking. It changed the history of cinema. The film had a profound effect on visual culture – nowhere more than in movies themselves. The year after its release, there was already a ubiquity of Matrix-like special effects in action movies and a combination of ‘bullet-time’ and wire fighting effects have been commonplace in sci-fi and superhero movies ever since.

But to conclude with Morpheus’s advice:

“Unfortunately, no one can be told what ‘the Matrix’ is. You have to see it for yourself.”