aka The Song of Solomon 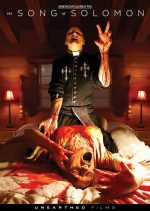 The American Guinea Pig series was one I had yet to encounter, though it’s telling to see Unearthed Films taking the concept of the original Japanese Guinea Pig series and transferring it to an American market, with The Song of Solomon a more traditional, albeit very gory narrative driven slice of genre cinema. 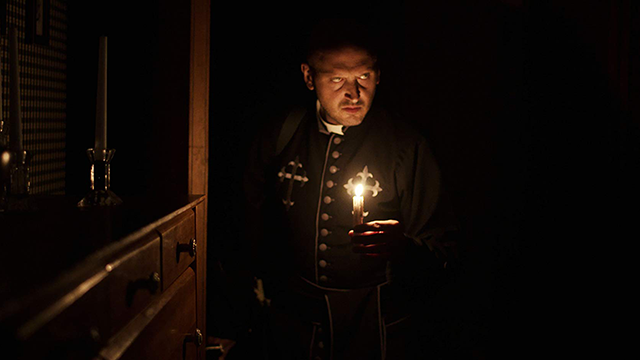 Then the series went into a sort of narrative format with odd, darkly comic stories that took a significant turn away from torture, yet kept much of the gore. The latest in the American Guinea Pig series seems to have followed the same progression with a straight-up possession film. However that doesn’t stop it from going all out on the grue and gore department.

The story focuses on Mary (Jessica Cameron) who is possessed by a powerful demonic force, and in this situation the church – often represented by a mysterious figure – meets and brings in a series of priests to try and exorcise her. However the priests have their faith and their sanity tested as each one slowly but surely faces up to the realisation that this demon has a strong and potent will over them, and can bend them to its own evil intentions. Whilst they try and fail to rid the demon from Mary, it’s down to one final priest who has an apocalyptic showdown with the unholy force. Though with Mary seemingly more powerful and violent then ever is it too late for her soul to be saved? And all the while not realising that the church have their own dubious intentions behind her possession. 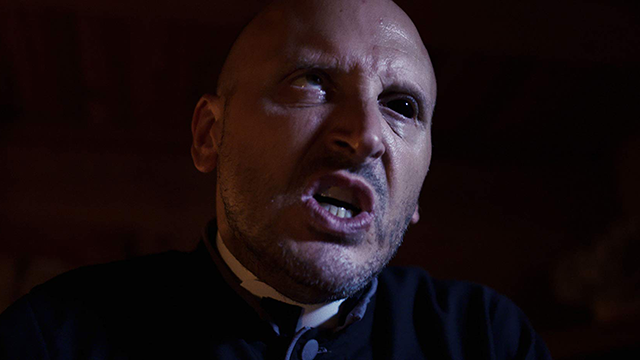 That is pretty much the plot of The Song of Solomon, and whilst it’s nothing majorly original, it is entertaining enough to keep the most ardent gore fan occupied, sprinting along at a neat and efficient 86 minutes. The film eschews the usual style of possession film in showing the build up to the exorcism and the background to Mary’s character, and instead jumps straight into the final battle – though in this case it’s a long final battle between good and evil. This is essentially a neat premise as it concentrates our attention to what is essentially the deciding moment in any exorcism film.

If anything the film signposts its intentions from the start with a fantastically over the top death scene of a man slitting his own throat, then sticking his fingers into the wound to pull his own tongue through it. It’s nasty but at the same time outrageously over the top in its execution that sets out what we are going to enjoy/endure for the remaining running time. The effects work is superbly handled and pretty much a great example of practical make-up and blood effects, and there’s plenty of blood in this…plenty. Credit should be given to Jerami Cruise and Marcs Koch for creating the SFX as it’s certainly one of the stars of the show. 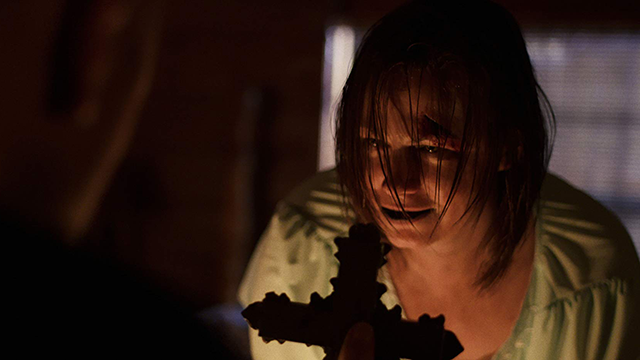 Whilst some of the script and performances are slightly wooden, we aren’t really in this film for the acting. We’re here to be shocked and entertained. Yet, there is a great central performance from Jessica Cameron who spends much of the film caked in demonic make-up. She makes a wonderful demonically possessed anti-hero in the character of Mary, even adding a strange, sinister and psychological edge to her, making us wonder if the character really wants to be saved, or is more happy in giving up her soul to the demon. And I even enjoyed Gene Palubicki – member of the metal band Angelcorpse and executive producer of the film – as a jaded cynical priest brought in to help with saving Mary. Underground genre fans will also notice Jim Van Bebber making an appearance as one of God’s warriors.

Much has been made that The Song of Solomon is more narratively straightforward, and somewhat mainstream than the rest of the American Guinea Pig films, with the other three in the series (Bouquet of Guts and Gore, Bloodshock and Sacrifice) leaning towards the underground in their purpose. However, whilst narratively it’s cohesive and has the purpose of a demonic possession/exorcism film, there is still a decidedly subversive bent to the proceedings. With a focus on blood and gore this will keep horror fans happy, and at the same time director Stephen Biro has shown a clever approach in adapting to a simple yet effective narrative that still retains an attachment to the underground roots, all the while delivering a highly entertaining genre flick.