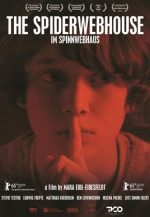 Growing up isn’t easy and if I’m honest, I’m still having trouble coming to terms with it. But sometimes the decision to live as an eternal kidult is taken away from us, with youngsters shouldering the responsibility of primary caregiver. Such is the case for twelve year old Jonas, who finds the transition to enforced adulthood a struggle in Mara Eibl-Eibesfeldt’s bittersweet gothic fable The Spiderwebhouse.

As the ‘man of the house’ in a single parent family, Jonas is no stranger to helping his mother look after his younger siblings Nick and Miechen. So when mamma states that she’s leaving for a few days to help get her demons in check, the young lad is more than happy to accommodate. With adult supervision walking out the door, the kids are free to lark about and eat as much junk as they like, as long as they keep up a pretence of normality for the nosey neighbours: ‘If anyone asks, I’m out shopping’. Unfortunately, a short stay in the clinic turns into an extended absence, and the novelty of self-sufficiency soon wears off as the money runs out. Skint and starving, the kids live in fantasy land of deterioration, as the spiderwebs keep growing. Determined to support his kin and keep his mother’s secret, Jonas embarks on nightly scavenger hunts for food and ways to earn money. It’s here that he teams up with the strange and intense Felix, an unorthodox yet supportive figure who shows him how to survive. 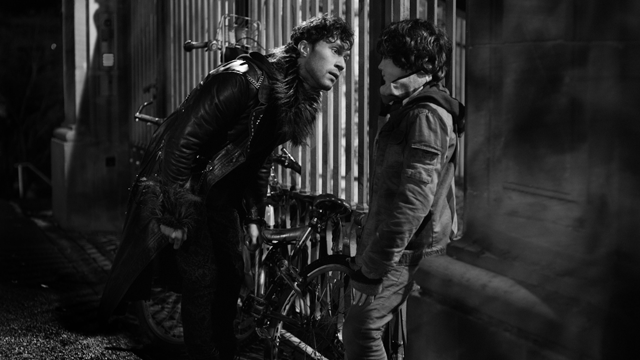 Showcasing the ignorant naivety of youth, and the harsh realities that running a household can entail, The Spiderwebhouse is artfully shot in black and white to capture the bleak beauty of a young trio’s situation. As its narrative unfolds, with an ethereal, dreamscape quality, there is confliction on just how you would like the predicament to play out. On the one hand, we want to watch as Jonas triumphs, he wants so desperately to be self-reliant and to ease his mother’s burden. But on the other, we can see how he struggles, whether it’s trying to keep his hyperactive brother in check, or to simply perpetuate his family’s welfare, the poor lad is spinning plates whilst trying not to buckle under mounting pressure. It’s a survivalist horror that we all know too well! There are plenty of well meaning adults reaching out to give support, but their offers are rebuked every time. Therefore the kids’ quandary, occasionally, becomes vaguely frustrating, as it’s so easily remedied. But a story without discord isn’t captivating at all. 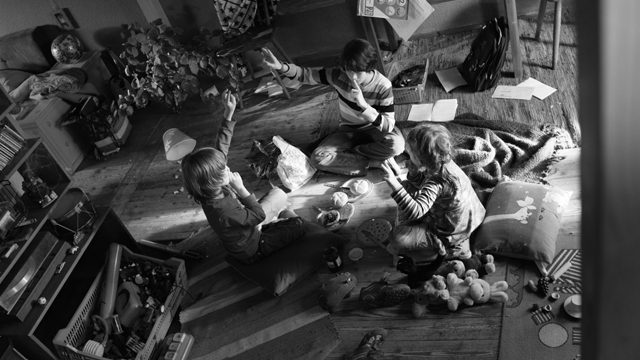 Instead we’re enraptured, not only by the stunning cinematography, but by the accomplished performances of the young actors. Far from the tits-and-teeth razamatazz of stage school wannabes, they each engender an understated, emotive earnestness, bringing authenticity to their escalating anxieties. Ben Litwinschuh as the overloaded first born carries the piece, his frustration and pain obvious, as the inevitability of real life crashes around him. Eager to succeed, but in need of an emotional crutch, he symbolizes how easy it can be to spiral into despair without any form of support. His younger siblings, played by Lutz Simon Eilet and Helena Pieske, demonstrate the kind of compassionate concern we’re not always quick to ascribe to children. But their tender thoughtfulness is heartwarming, as they help their brother through the most inhospitable state of affairs. In their own unique, childish way of course. Mind you, it wouldn’t have hurt one of them to pick up a duster every now and again, but at that age, I wouldn’t have either!

Gentle and ponderous The Spiderwebhouse is a charming portrayal, exploring the complexities of depression, and the harshness of a world as seen through a child’s eyes. Layered with nostalgia and exquisite aesthetics, it’s a well crafted and lyrical modern day fairytale.