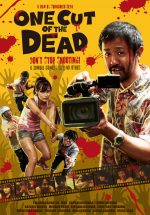 Written and directed by Shinichiro Ueda, One Cut of the Dead begins with an impressive 37 minute long take set in an abandoned Japanese water filtration plant (the “one cut” of the zomcom’s title).

A young girl wielding an axe (Akiyama Yuzuki) is backed into a corner by her undead boyfriend (Nagaya Kazuaki). “Stop!” she screams, and for a brief moment he obliges. As she reaches to touch his hand, he again lurches towards her, arms raised, covered in blood, and skin turned a vintage shade of grayish-blue reminiscent of George A Romero’s Dawn of the Dead (1978). Despite her pleas for him to wake up, he grabs her – sinking his teeth into her neck. “I love you”, she proclaims before dying in his arms.

“Okay, cut.” shouts the director (Takayuki Hamatsu). The camera spins around to reveal a small film crew surrounding the scene, eager to hear his feedback. Instead the director is silent. The make-up assistant (Harumi Syuhama) rolls her eyes and asks “How many takes?”

42. Furious, the director approaches his leading actress – pushing his ‘zombified’ male lead aside – and berates her for another unconvincing performance. 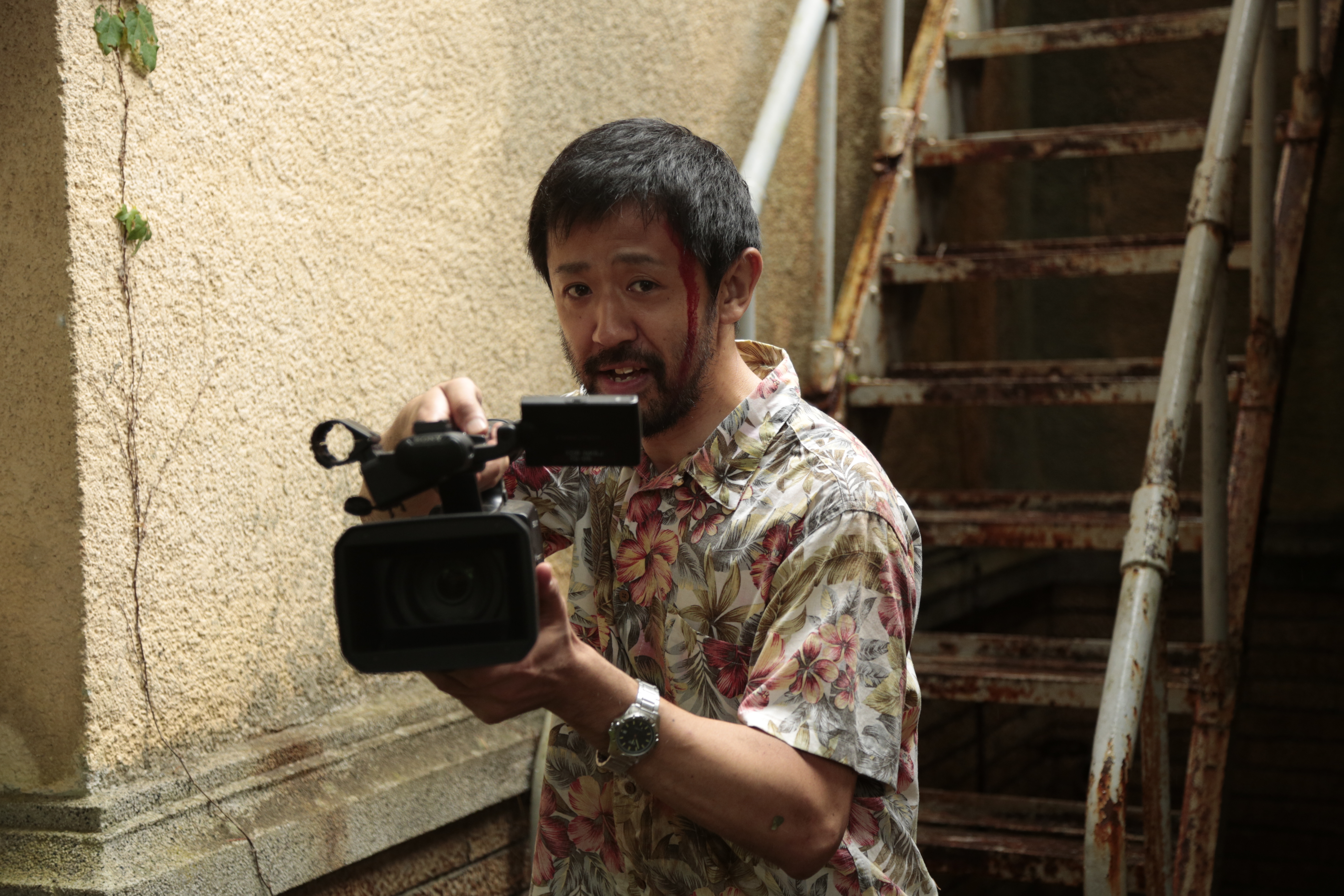 “You’re facing death. Were you really scared? Give me real fear! The true shiver in your face! Why don’t ya peel off that lie-infested mask of yours?”

“You’re over the line!” shouts the male actor, but he is greeted with a hard slap to the side of the face. “Fuck off you little shit!” the director screams, but the situation is defused by the make-up assistant. “Why don’t we take a breather?” The director storms off on his own, frustrated with the lack of any real fear or emotion being portrayed in his low-budget zombie movie.

As the cast and crew await his return, they begin to discuss the shooting location – perfect for a horror film! “It’s funny you should say that” quips the make-up assistant…

“It’s just an urban legend… On record, this place was built for water filtration. But the Japanese army used here for some sort of experimentation… Human experimentation. Like…bringing the dead back to life.” 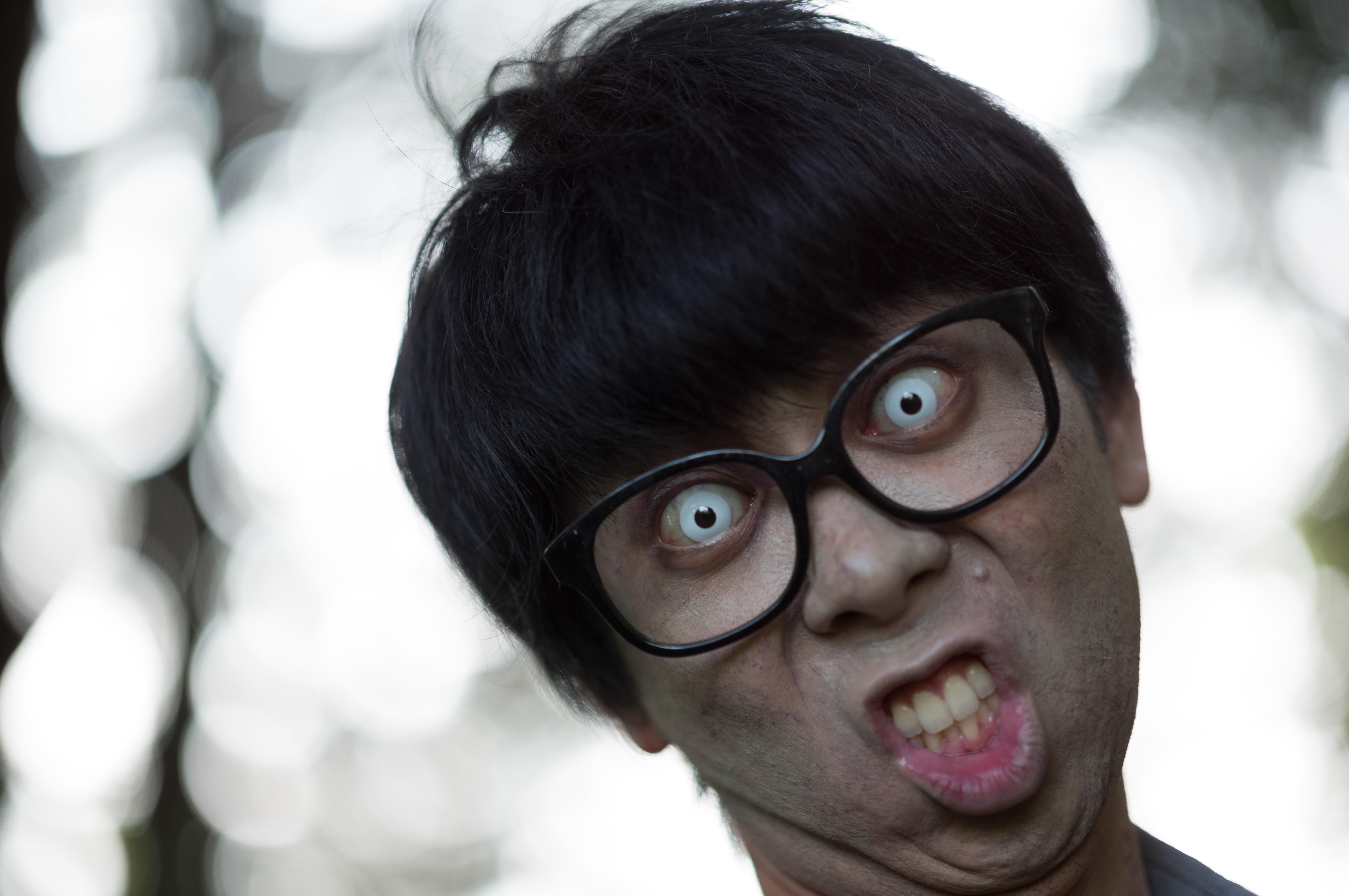 She looks over at their male lead who is still covered head-to-toe in zombie make-up. “Uncanny, huh?”

Unbeknownst to the cast and crew there is some truth to the urban legend… This water filtration plant was chosen as the primary shooting location so the director could exploit that truth! To bring fear. To bring reality. To bring back the dead!

The authenticity of the violence encourages the director to keep shooting, as zombies terrorise his cast and crew. Indeed, the original Japanese title for One Cut of the Dead is Kamera o Tomeru na! (lit. “Don’t Stop the Camera!”) But if you have not yet watched One Cut of the Dead, I suggest you stop reading now. No, seriously! The less you know the better! 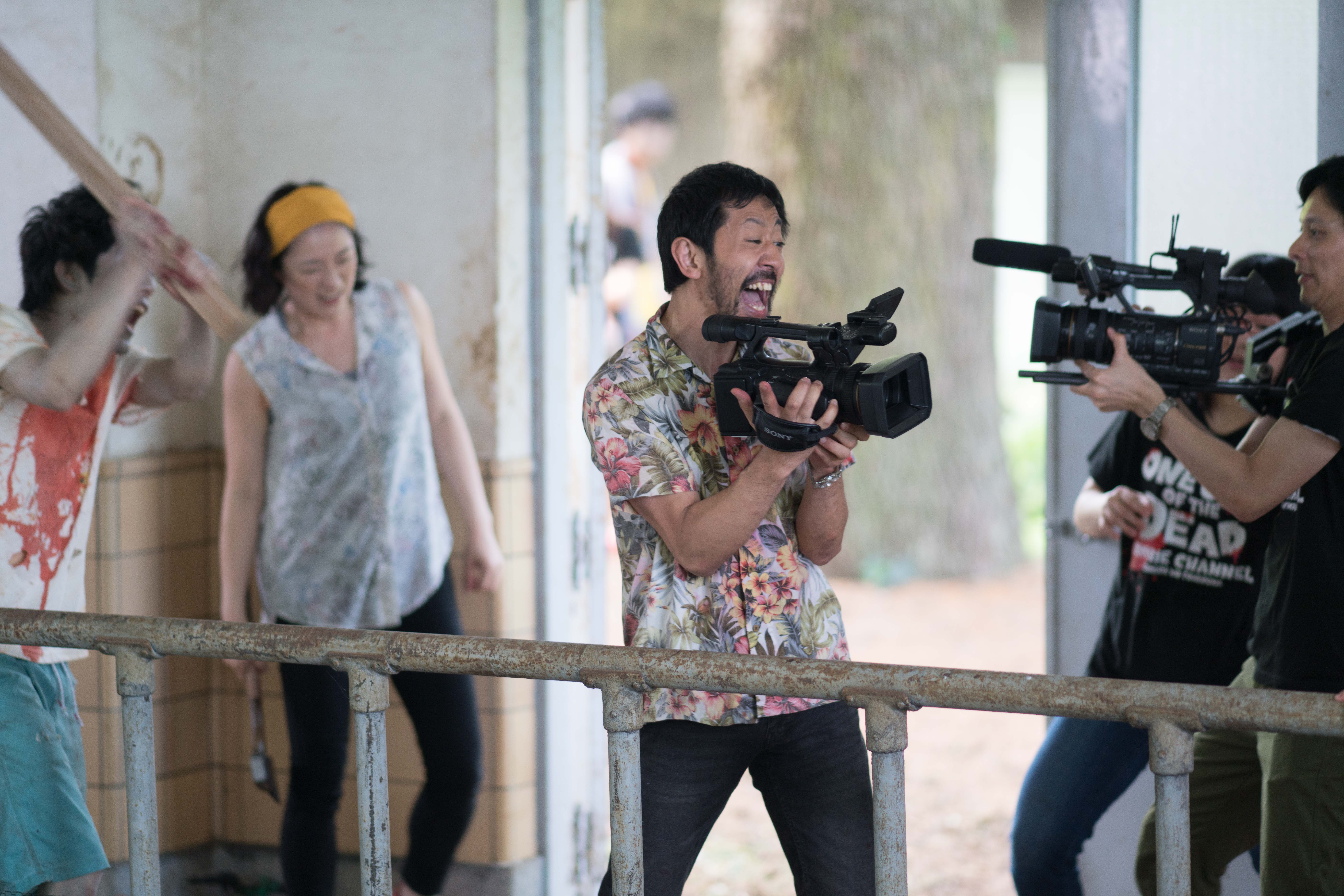 I have summarised the first 10 minutes of the opening 37 minute long take above. It’s a brave concept, with enough technical skill and comedy to keep you invested, but it masks a tired narrative: Zombies. Even a movie about directing a zombie movie – whose cast and crew are subsequently attacked by zombies – still has to rely on old and overused horror tropes.

But let’s not forget that One Cut of the Dead is a feature-length movie; 96 minutes to be exact! 59 minutes remain, and sometimes what can happen behind-the-scenes is even more exciting than what is occurring in front of the camera. 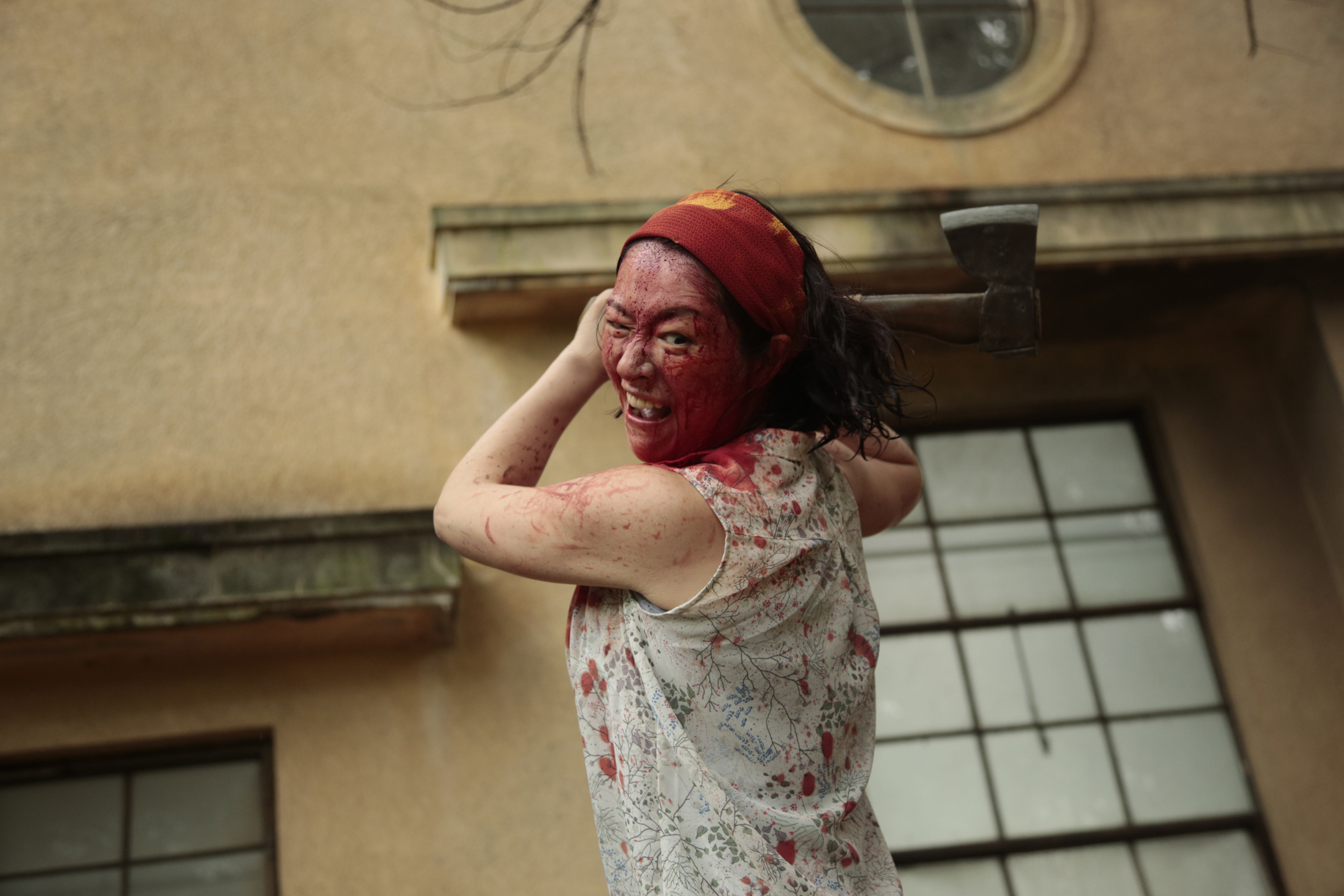 After the technical first act (kudos to the entire cast and crew) – a self-contained low-budget, one-take zombie movie – One Cut of the Dead jumps one month back in time. The fictional director – now known to us as Higurashi – is an actual director who has been given the opportunity to direct a short zombie movie for a fledgling television network, known as ‘The Zombie Channel’. Higurashi is known by his personal motto for being “fast, cheap, but average”, which gets him the gig. However, the network executives do have two stipulations he must abide by: One, live broadcasting. And two, one cut! One camera, one take, no cuts – start to finish.

“Making a zombie movie, on a live broadcast, in one take? What an absurd idea, that’s funny.” 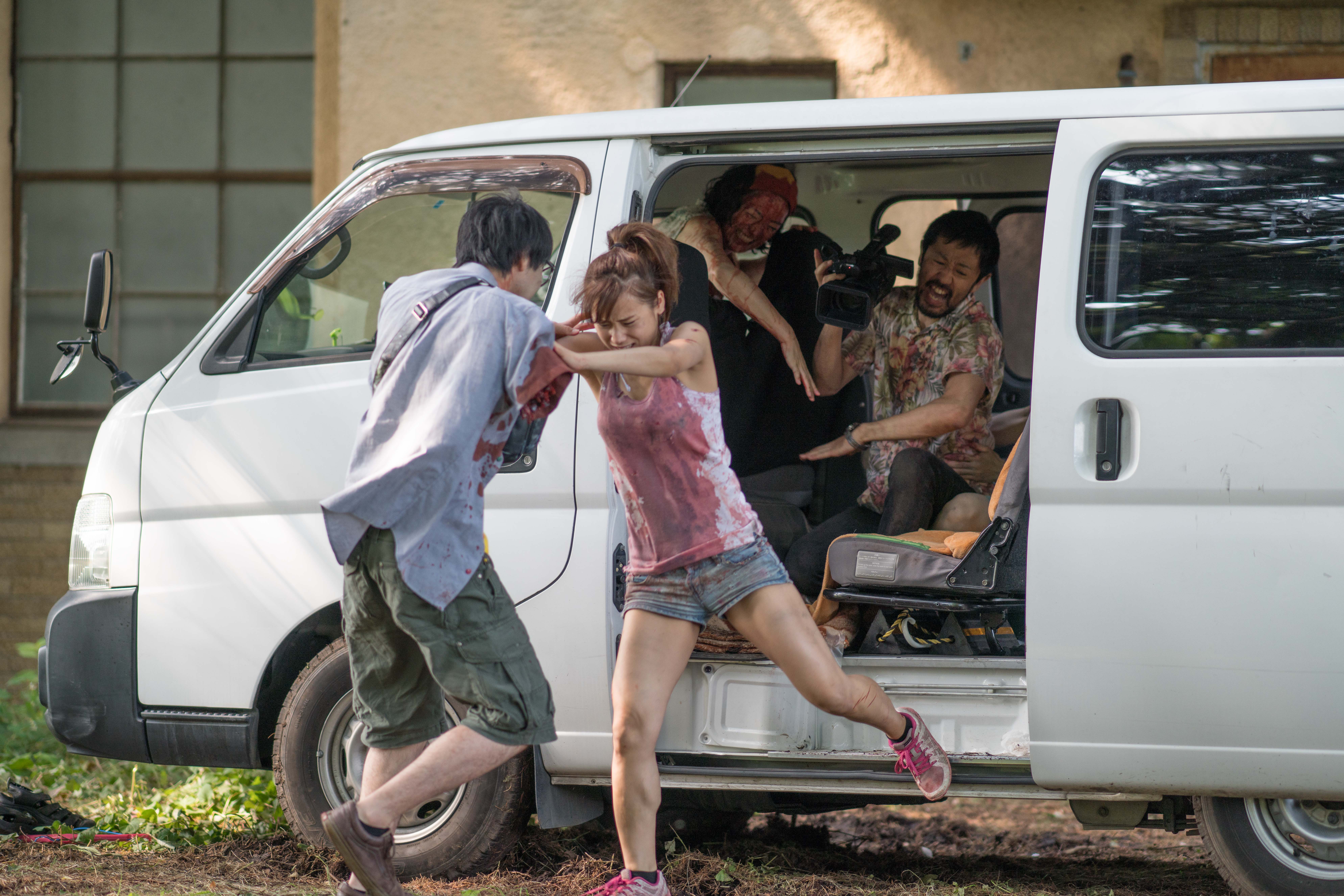 “Dead serious”, one of the network executive responds. What could possibly go wrong? Thus begins the second and third acts: the making of Higurashi’s “one cut” movie-within-a-movie.

No longer is One Cut of the Dead a virtuosic zombie movie that relies on tired horror tropes. Director Shinichiro Ueda’s movie instead injects the zombie trope with new life; thus reanimating the sub-genre. This is not Dawn of the Dead, nor is it Shaun of the Dead. This is not satire, nor is it homage. Instead, One Cut of the Dead celebrates low-budget filmmaking – the desire to create artistic expression through film, and the struggles that come with it – which will have you, the audience, rooting for Higurashi as he attempts to create something more ambitious than the usual “average” fare he was previously known for. 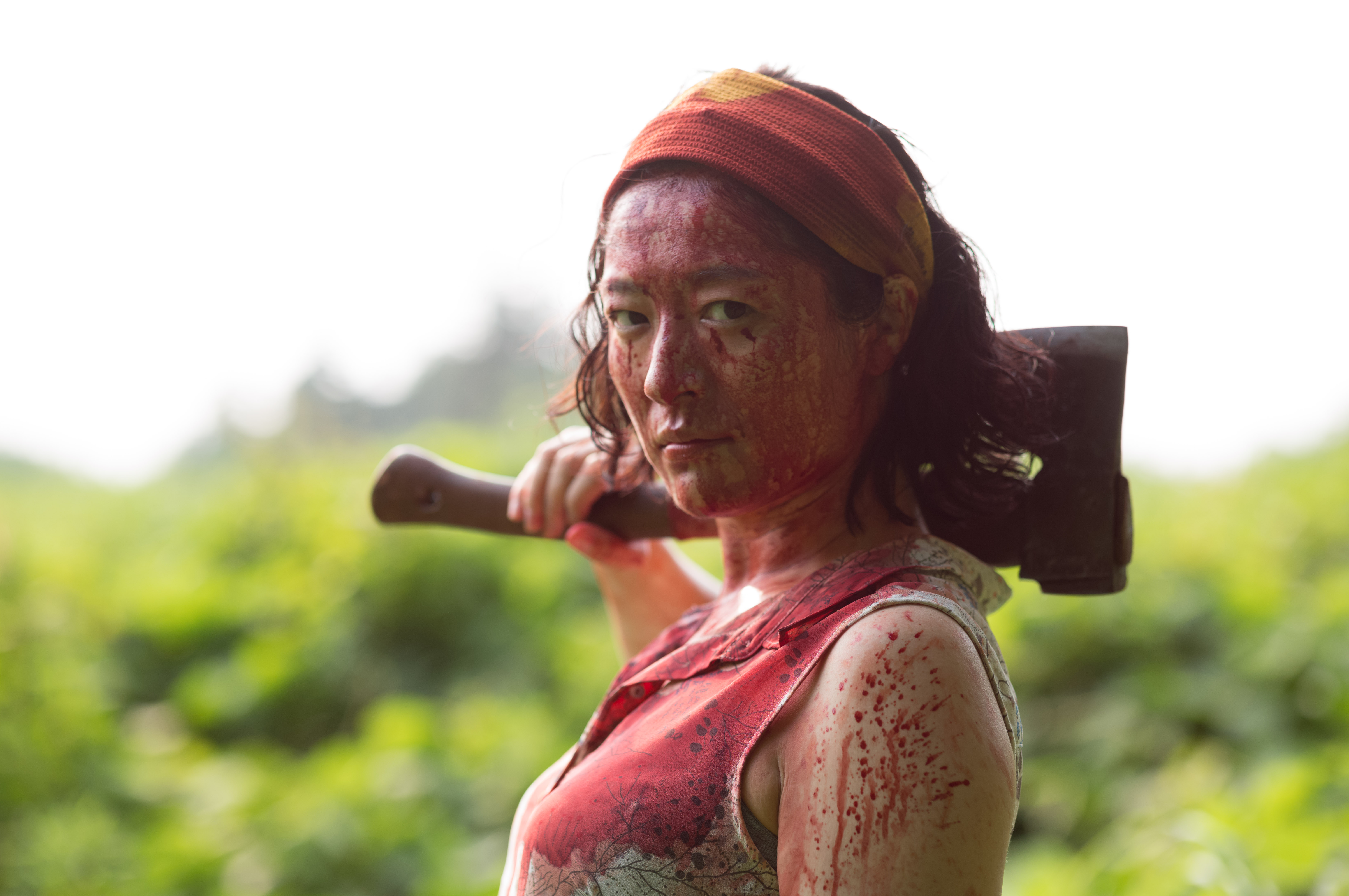 Speaking of low-budget filmmaking, Ueda has previously stated that he is “making films which will still be fun after 100 years”, and I believe One Cut of the Dead is a perfect example of that. Made on a budget of just three million yen, One Cut of the Dead opened in Japan on just one screen, and ran for only six days. Since then Ueda’s film has drawn attention through word of mouth – and internationally, after it screened at the Udine Far East Festival – ensuring a wider domestic release: two hundred screens in Japan by 2018; grossing around eight hundred million yen! Now, Third Window Films has brought One Cut of the Dead to the United Kingdom!

The success of One Cut of the Dead can be attributed to Ueda’s ability to ensure that comedic moments from “one cut” – some thought to be unintentional – land just as well in their second context. For example, remember the awkward silence and delivery following a loud noise that didn’t really lead anywhere? “Wow, what was that? What timing! The wind?” Well, when we return, behind-the-scenes, we learn that a drunken cast member outside stumbled and hit his head against the door, causing the unscripted noise, and subsequent improvisation to the situation. These small details – meticulously crafted by Ueda – change our perception of what came before. 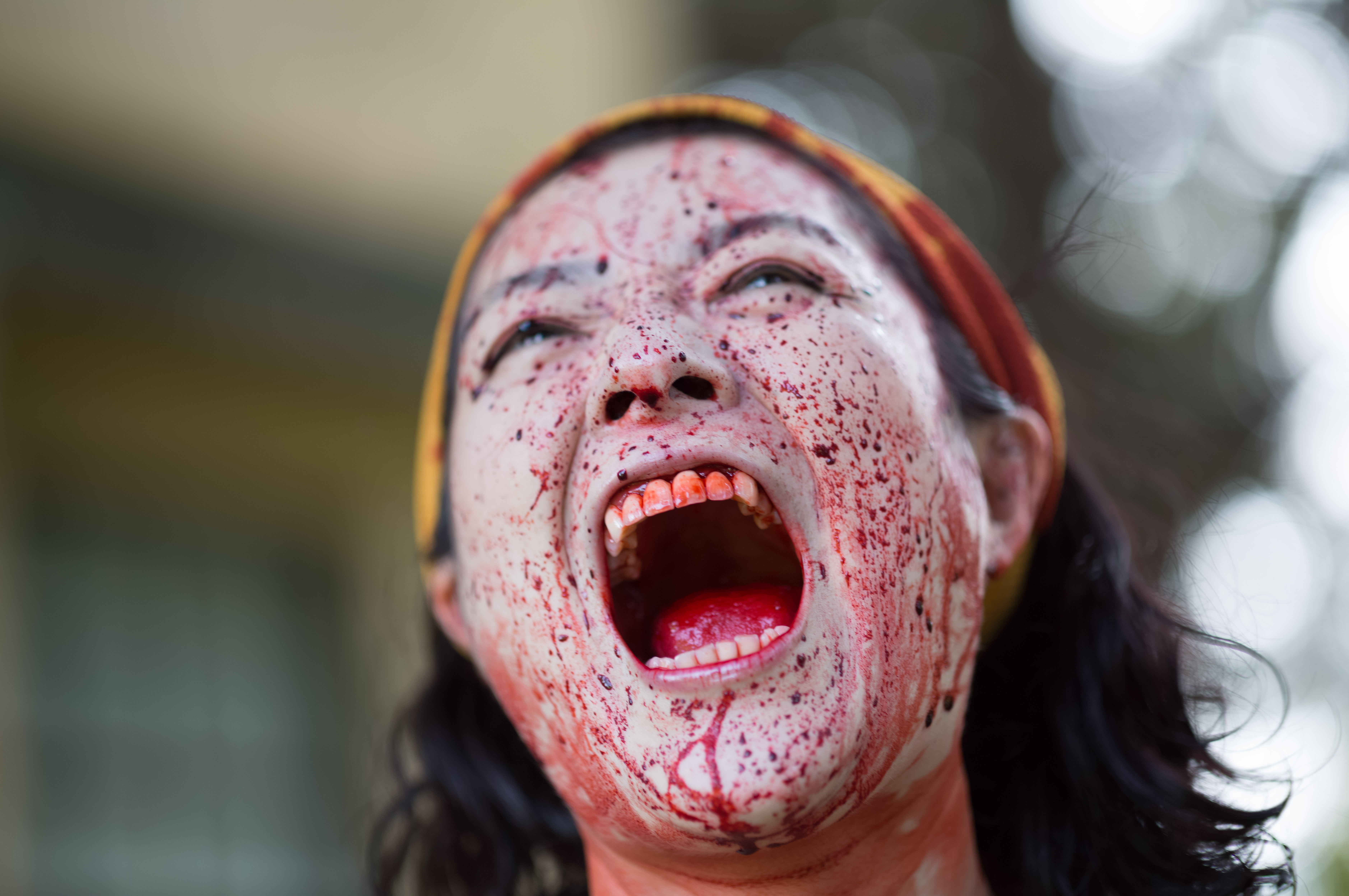 But we can’t give Shinichiro Ueda full credit for One Cut of the Dead. The cast of unknown/amateur actors Ueda was able to assemble truly shine throughout the movie; their characters taking on, not just the living dead in one continuous take, but the reality of shooting one continuous take. Personal standouts include Takayuki Hamatsu and Harumi Syuhama; displaying energetic chemistry, capturing emotion, and providing much of the comedy. “POM!”