In 1968, George A. Romero established the modern zombie film with his raw and terrifying debut the Night of the Living Dead, one of the most well-regarded and influential horror movies of all time. He followed up his debut with two more zombie hits, Dawn of the Dead and Day of the Dead, an unholy trinity of zombie films often referred to as the ‘Dead Trilogy’.

Now, 50 years after it all began, there’s a new entry into the undying franchise. Day the Dead: Bloodline is a bold reimagining of his 1985 classic, released on DVD this October – just in time for Halloween. To mark the release of Day of the Dead: Bloodline, we’re taking a bird’s eye view of George A.Romero’s living dead series to stitch it all together. 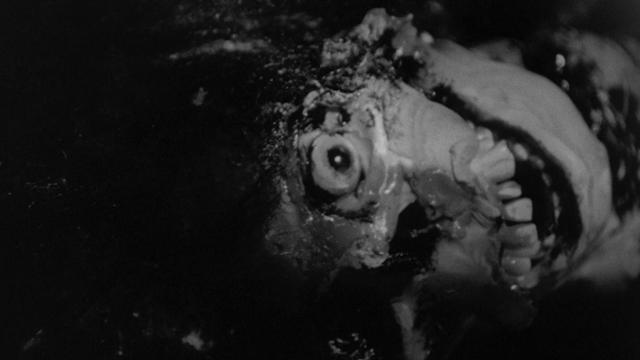 Night of the Living Dead was the film that started it all. The classic film focuses on the outbreak of a zombie horde in a localised area of North America. To make his first feature, Romero and his team filmed in Pittsburgh (far away from the glamour of Hollywood), with a budget of just $114,000, a cast of unknown actors, and a short 30-day shoot. With only this, they put together one of the most memorable horror films in the history of cinema. Night of the Living Dead is a masterclass in low-budget filmmaking with creativity which famously included a roast ham covered in chocolate sauce used for bloody human flesh. The film also grossed $30 million on release making it one of the most profitable low-budget films of all time. The film has since been credited with creating the ‘modern zombie’ (a flesh-eating reanimated person seen in countless movies since) and for casting African American actor Duane Jones in the lead role when the Civil Rights movement was in full force. Night of the Living Dead is still a brutal and terrifying horror tale that is startlingly relevant today: a horror that no film-lover’s shelf should be without. 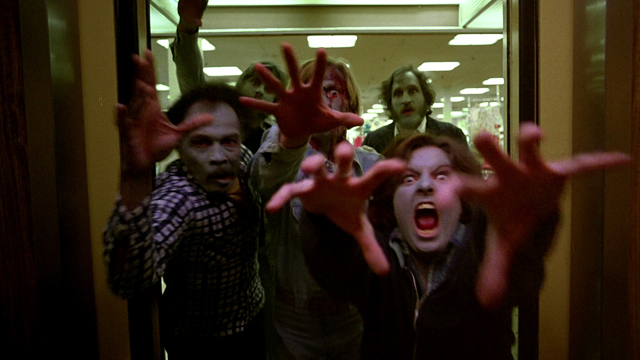 Dawn of the Dead was Romero’s second foray into the zombie genre, ramping up the splatter for a new, more brutal decade. Once again, the film dealt with a rampaging horde of monsters hell-bent on gobbling down humanity. Following the outbreak of the first film, the new film focuses on a plague of zombies that has now spread into the towns and cities of America. The film’s fantastic make-up and gore effects were famously created by Tom Savini, much of it done spontaneously on set. Savini had recently returned from a photographic tour of Vietnam and said he was simply recreating the real-life horror he had seen there. Dawn of the Dead is an epic, gory and fun ride that has rightly achieved cult status in the years since its release and remains one of horror’s best. 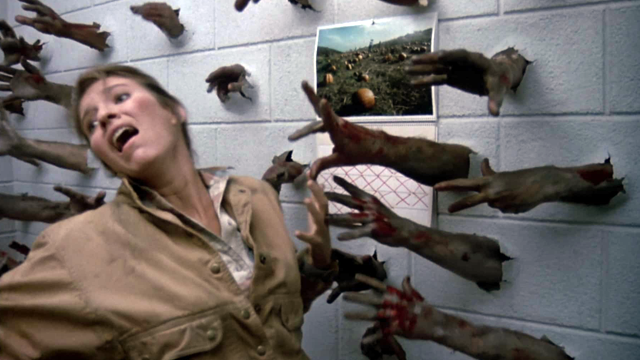 Day of the Dead took the Romero zombie formula into the “selfish” 1980s, complete with brash Army officers and a cracking 80s score. Following a few years on from the events of Dawn, the Dead have nearly taken over the world as only small pockets of humanity remain. We focus on a group of Army staff and scientists who lock themselves in an underground bunker, trying to figure out how to survive and defeat the zombies. Fans of the film will be familiar with Bub, a zombie who shows signs of intelligence and could be the key to reversing the plague. Day of the Dead sometimes gets overlooked when compared to the more bombastic previous entries in the Romero franchise, but this one is certainly vying for our affections as the dark horse of the original trilogy. 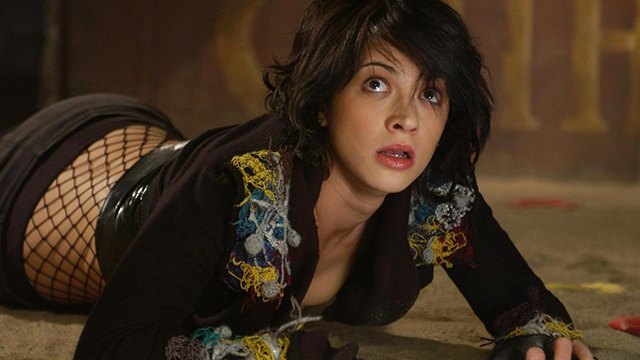 In the 2000s, Romero brought his original franchise into the modern world with three more cautionary tales of terror. The first of these was Land of the Dead. His new film is set many years after the initial outbreak and focuses on the zombies who now have the upper hand over the living. Land develops the ‘intelligent zombie’ idea from Day of the Dead, as a particularly clever ghoul leads a march on the living hoping to totally destroy humanity. For those with a keen eye on Romero world detail, you can see Tom Savini’s biker character (who was killed in Dawn) reanimated in one scene. Land of the Dead is a solid entry into the Romero series and he wasn’t done yet… 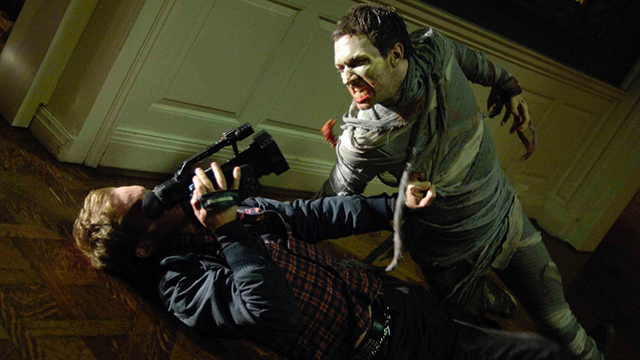 In the same year that Paranormal Activity took the box office by storm, Romero tried his hand at ‘found footage’. It remains slightly unclear where Diary fits into the Romero ‘Dead’ world timeline. The film is apparently set on the same day that the original outbreak takes place in Night although the setting has been updated to the modern day. If you look and listen closely, in one scene you can hear the news report from Night. Whatever the calendar date is, Diary is an absolute hoot with more zombie carnage than you can shake a severed arm at. 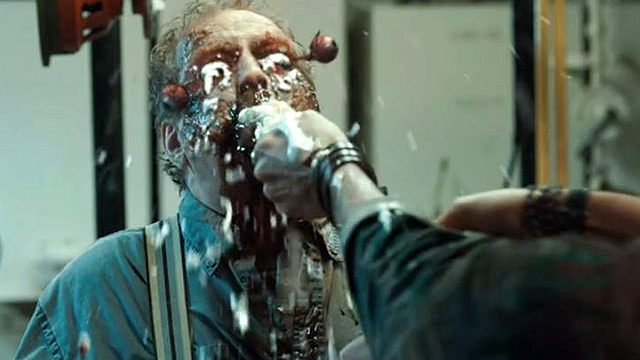 Survival of the Dead is a spin-off from Diary, featuring a group of National Guardsmen who appeared in that previous adventure. In the film, tensions flare up between two families: one family that wants to eradicate all the undead and the other that wishes to keep their loved ones quarantined on an island until a cure can be found. Chaos then ensues for our enjoyment! Survival is Romero’s last film in the franchise, as he sadly passed away in July 2017 before he could make any more nightmares. The film was meant to spawn two more sequels which he was going to film back-to-back. One can hope that these two other entries still might be made one day. 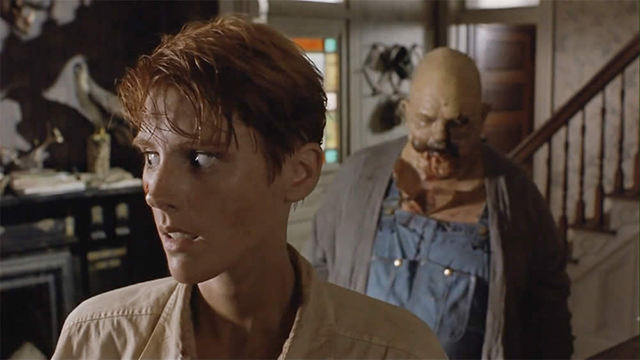 Make-up and general horror movie legend Tom Savini stepped up to direct a remake of Night of the Living Dead in 1990 with a screenplay co-written by Romero himself. The film was made mainly due to rights issues with the original film and Romero’s desire to remake it before someone else did. Savini was originally only going to do the FX but ended up directing after some persuasion. The gore was kept “realistic”, inspired by real autopsies, forensic textbooks and Nazi death camp footage. Savini apparently found the shoot very difficult due to clashes with producers and he was unhappy with various edits he believed hurt the fans’ response. The film was fairly poorly received on release but is rightly considered now as one of the best and most respectful horror movie remakes. It features Tony Todd who would make his name a couple of years later as the titular Candyman. Being so similar to the original film, Night of the Living Dead 1990 is an excellent curio. 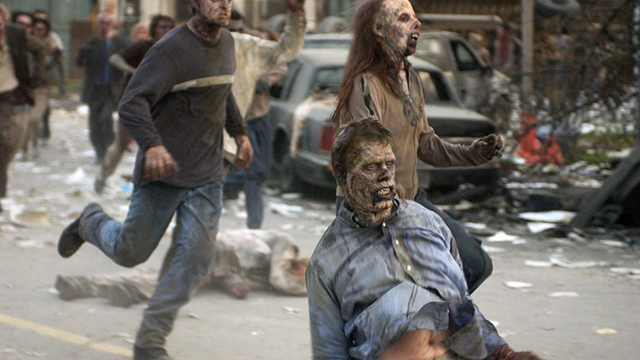 Another highly respected remake, 2004’s Dawn of the Dead was written by James Gunn (Guardians of the Galaxy) and launched the theatrical directorial career of Zack Snyder (300, Man of Steel). It’s a much more action packed, modern take on the same trapped-in-the-mall story and it proved to be entertaining and popular with audiences. With fast-moving zombies and tense, gore-soaked scenes, this remake successfully updated the genre and brought a younger audience into Romero’s world, whilst boosting the careers of its makers. In the UK the film was set to come out the very same day as Shaun of the Dead, which was pushed back two weeks as the names are so similar. Tom Savini also makes an appearance. The film proved to be good, fast and gory fun.

Day of the Dead: Bloodline is the debut English language feature from acclaimed Spanish director Hèctor Hernández Vicens (The Corpse of Anna Fritz), who is a longtime fan of George A. Romero’s original ‘Dead’ series. Five years after an epidemic nearly wiped out the world’s population, Dr Zoe Parker lives in an underground bunker among a small group of military personnel and survivalists, working on a cure while fighting armies of the undead. When a dangerous patient from Zoe’s past infiltrates the bunker, Zoe discovers he just might hold the key to saving humanity… or ending it. Ramping up the action and epic bloodshed – and with plenty of nods to the 1985 classic – prepare for the next bloody chapter in one of horror’s most beloved franchises.