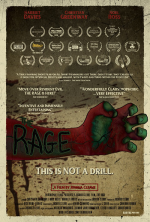 Catastrophe can — and often does — happen in the blink of an eye, even in places that should be prepared for any eventuality. In The Rage, even a laboratory working with a dangerous virus, one place where everything had better be under strict control, can see all its safety protocols fall apart in an instant, leaving nothing but chaos behind.

One moment, Joe (Christian Greenway) and Terry (Noel Ross), fellow lab techs at New Bio Energy Labs, are having a nice chat on a Monday morning, and the next Terry is on the floor writhing in pain and screaming in terror. Joe leaps to help his friend and try to contain the situation, but viruses aren’t likely to comply with a polite request to stay put and not go around infecting the whole neighborhood. Worse, with Terry now infected, he wants nothing more than to attack his friend or anyone else who might have the misfortune to be nearby.

With the virus unleashed, Joe — having miraculously not been devoured by the rampaging Terry — is now a man obsessed with a mission as he stumbles through the halls, trying to find his girlfriend Lucy (Harriet Davies), who also works in the now deadly building. Finding her will be difficult enough in the confusion. Keeping her safe might be impossible. 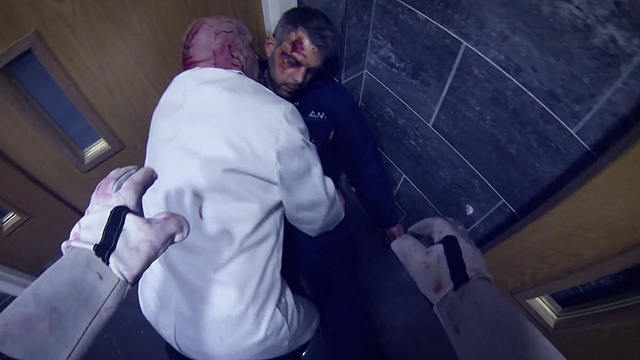 It’s a great example of a compelling short made on very little budget. It’s almost entirely shot from Joe’s perspective, and this, combined with the fact that it all takes place in the confines of one building, gives the film a wonderfully claustrophobic feeling that ‘s very effective. Joe’s panic is clear as the virus, and the fear of the virus, spread with equal speed and his increasing frustration over not being able to connect with Lucy is palpable. The action rarely lets up, but the more subtle touches aren’t neglected either. It’s a nicely balanced film that hints at big things ahead for writer/director Joshua Cleave.