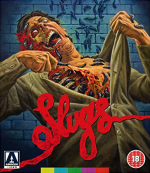 Arrow Video are quickly becoming heroes to horror fans that cut their teeth on the genre in the 80s. Regularly releasing the type of titles that you would be fascinated with in your local independent video shop, it gives those of us who excitedly gorged on the type of low budget horror these shops stocked a chance to re-watch them with modern eyes, and those too young to rent them a chance to finally get their hands on them.

In 2016 Arrow Video re-released the 1988 creature feature, Slugs, to the horror community. Directed by Spanish veteran Juan Piquer Simón (who died in 2011), Slugs focuses on the town of Ashton, a classic American small town where nothing ever happens. Well, that is until Mike (Michael Garfield, The Warriors), a health department official, visits a house to evict a guy only to find that he has had his vital organs eaten. This alone would cause alarm bells to ring, but when you also take into account that loads of local wildlife has been slaughtered in the same area, the local officials really start to panic. Teaming up with a nerdy professor, Mick must find a way to stop the man-eating pests before it is too late! 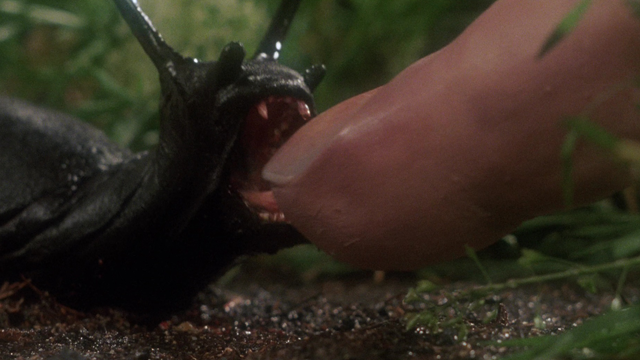 Slugs is basically an old school creature feature, mixed with the European gratuitous nudity and violence that are par for the course in the exploitation films that we all love. Based on a novel by Shaun Hutson, Slugs does actually stay fairly faithful to the source material, although a lot of the novel’s sexual violence is cut.

Slugs is, on the surface at least, one of those daft films where you have to accept you will be laughing with it rather than at it more often than not. This is fine a lot of the time, but when you are trying to make slugs appear to be a threat to mankind, this level of daftness means you’re fighting an uphill battle.

Thing is though, the director manages it. The slugs actually do come across as a threat! Simón uses some seriously impressive gore effects and loads of exploitation style violence and deaths to achieve this, and when you consider the budget Simón had to work with, it becomes clear that he must have used every penny to achieve the effects he did. 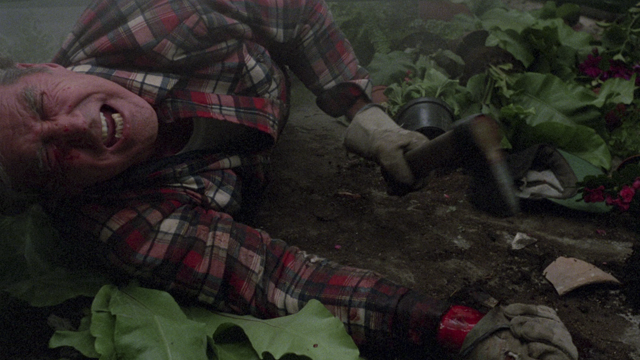 Unfortunately, the special effects are the best part of the film by a long way. The biggest issue is the film’s pacing. You just never get a chance to take in what you have seen. Then there are the times it just jumps from one scene to another with no warning or things to link them. And then there are scenes that seem to just be repeats of earlier scenes and serve no purpose at all rather than to increase the running time.

A serious side effect of these pacing issues is that you’re not allowed to connect with any character, and if you don’t connect with them, why should you care when they end up dead? If Simón had spent some of the screen time developing the characters, then Slugs would have been a lot easier to sit through.

For the budget and time period it was made in, the acting in Slugs is actually okay, but unfortunately the cast are undermined by a very weak, by the numbers script. This doesn’t allow the cast to make their characters more grounded and human. Instead they all feel like monster movie parodies. On one hand it is understandable, as this is a movie about killer slugs so is never going to the most polished of scripts. But at the end of the day, there have been loads of movies with similar premises that have allowed the characters to be much more human and believable. 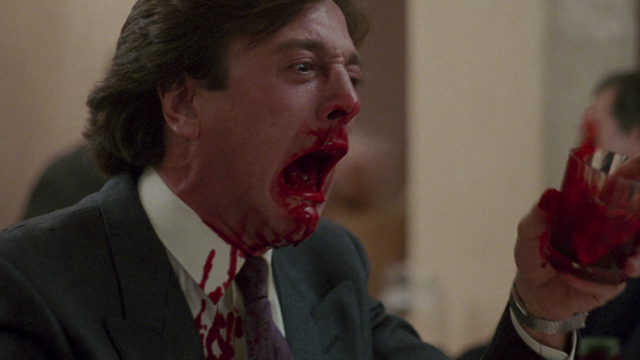 At the end of the day, anything in the film that doesn’t include a slug killing someone is very hard to sit through, and that’s okay, but when I sat down to watch it I wanted to watch a film, not just a highlight reel of effects, which is all you have after you have tuned out during the dross.

I feel like I’m being overcritical, as I’m sure there will be people that are able to see through the negatives of the film and enjoy it for what it is. And if that is you, then go for it. The levels and quality of the gore and kills are great, and the sheer number of the slugs the effects team created is immense. But if you like a bit more from your monster movie then I’d have to give this a miss, as there are loads of better examples of creature features out there to explore!