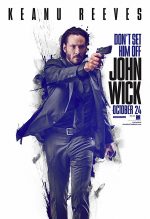 I’m not a fan of action films. You know the ones, purely ‘Action’. I hate car chases. DESPISE ‘em! (1998’s Ronin looks like my worst nightmare!) I hate things exploding left, right and centre. I hate overly-long gunfights. (Yes, Heat fans, I’ve fast-forwarded lots of this too, so fuck you!) They annoy me and make me all fidgety. True, I loved, for example, Predator – predominantly an Action film, yes. And I’m sure you’re all aware it stars Arnie – Mr Action himself, Arnold Schwarzenegger – yes, but it was action wrapped around a sci-fi/monster movie, so for me, it had that special ingredient… Enough to get me through the monotony of ‘Big Arn’ lifting jeeps and Carl Weathers being greased up to the max anyway.

John Wick is an action/thriller, directed by two stunt men (Chad Stahelski and David Leitch) and stars Keanu Reeves. “WHY ARE YOU WATCHING THIS, YOU FUCKING MASOCHIST?!!” I hear you shout, and you’d be right to ask. I dunno. But I’m SO glad that I did! 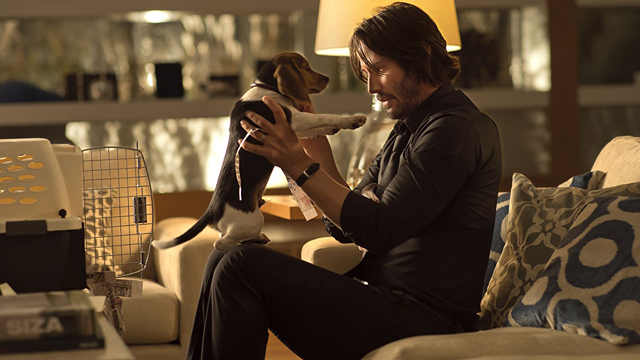 John Wick (Reeves) is an ex-hitman, grieving for his recently deceased wife. When the son of a mob boss takes a liking to Wick’s car and decides to take it, bad things happen. I’ve left a couple of details out here (one being the MAIN reason I’d personally go on a murderous rampage!), but that’s basically it, plot-wise. So as you can see, John Wick is a good, old fashioned revenge flick – cue all the things I’ve listed above. But as ALSO mentioned, it’s how these things are delivered that make all the difference.

From the first second, John Wick is a gorgeous looking noir film. Stahelski and Leitch have somehow managed to give us slick and stylish in a subdued way, without trying to dazzle us with fight scenes in panning slo-mo or Michael Bay-style sun glare camera tricks. They’re also not afraid to allow a 101-minute film to take its time to have us where it wants us before kicking us square in the bollocks. Dialogue is purposefully sparse to begin with as our titular lead stumbles from a grey funeral to his stylish but empty home – the occasional flashback allowing us the briefest of glimpses into his recent past. Quietness and calm is king, and this all bodes well for when his cute new puppy’s shit truly hits the fan (after decorating his front lawn and plush carpet, that is!). 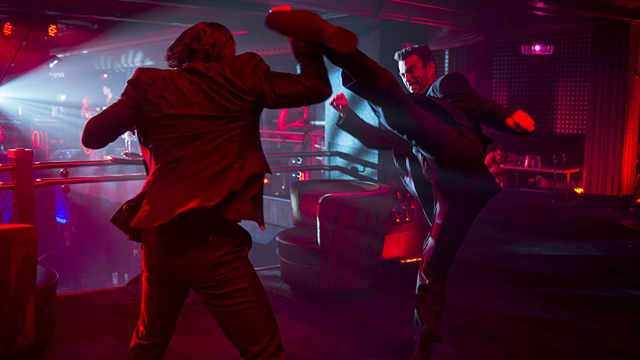 Other than these points, John Wick offers hardly any more story, background, misplaced drama or humour – we have more than enough for a revenge story already – but it insists on still being a beautiful looker, interspersed with a brief, sharp, straight-to-the-point script.

As you can imagine, being helmed by two fellas who are used to twisting people’s heads clean off and throwing themselves face first into rehearsed trouble for a living on camera, the action sequences (and there ARE a lot of them) are choreographed to the Nth degree, fast-paced and absolutely mesmerising. Although Keanu may not be everybody’s cup of tea acting-wise, he certainly knows his shizzle when it comes to the ol’ punchy-kicky. But Matrix-style wire work this is not; this is raw, dark, gung-ho brutality – expertly edited and as merciless as Predator’s baby oil bill. 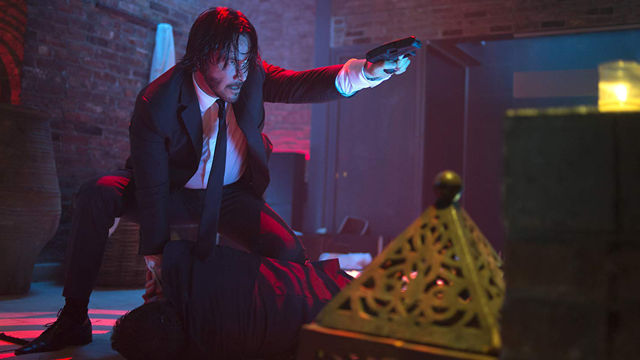 On the subject of Reeves’ acting, I too am not his biggest fan (a few films aside), but he does do “brooding” very well and it’s enough to make John Wick as a character seem more than believable. Add to this Willem Dafoe, John Leguizamo and Ian McShane, amongst others, and we’ve got an overlooked little gem on our hands. An unusual, special mention must also go to the folks in charge of the subtitles – instead of appearing like the usual, generic post-shoot add-on, these are embedded excellently into each scene and become a big part of the film’s overall appeal, bringing to mind Timur Bekmambetov’s 2004 horror/fantasy Night Watch. Last but by no means least, all this is presided over by a clever, thoughtful soundtrack that’s been very carefully chosen to help punctuate the set pieces for maximum impact.

Hands up, who DOESN’T love a good ol’ bit of revenge, eh? After all, it reinforces our primal and innate sense of justice, right? We all know how these films go – fuck, the opening scene pretty much TELLS us! – but it’s how we get there that counts. And no, I won’t watch fuckin’ Ronin!