This year marked my third time at the Edinburgh Festival Fringe. Edinburgh itself is a breathtaking city, but during August each year it becomes a hub for arts and culture; thundering with creative energy (and literal thunderstorms), whether it be theatre, comedy, music, or something else entirely.

Each year that I have been to the Fringe – beyond discovering more of the vast history of the city – I have always attempted to see as many different shows as time (and my bank account) allows. Highlights from last year included The Toxic Avenger: The Musical, and Poe’s Last Night performed by David Crawford (Dawn of the Dead). To say that I’m attracted to the macabre is an understatement.

This year I wanted to write about my experience and review three of my personal highlights from the 2018 Edinburgh Festival Fringe. Each show is darkly humorous and worthy of your time if they make an appearance at next year’s Fringe, or perhaps elsewhere. The tagline for this year’s Fringe was “Into the Unknown”, so let’s just dive right in! 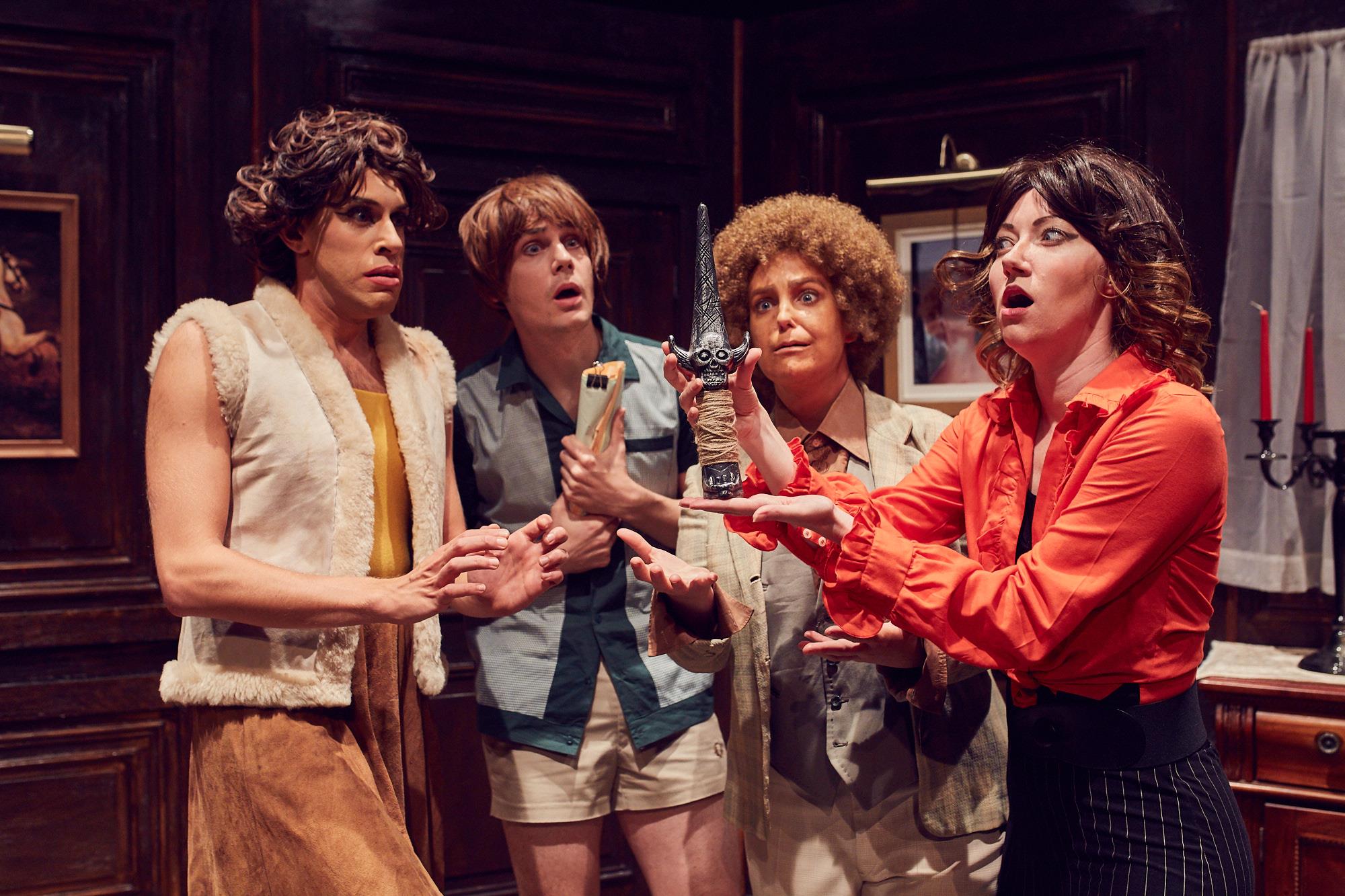 “Welcome to the worst film never made.”

Kill the Beast are a critically acclaimed, multi-award-winning comedy troupe, and Director’s Cut is their fourth and most ambitious Fringe show; following The Boy who Kicked Pigs, He Had Hairy Hands, and Don’t Wake the Damp.

Director’s Cut transports the audience to the film set of a fictional 1970s low-budget, satanic shocker entitled ‘Rosemary’s Toddler’, where not everything is going according to plan. Director Wallis Byrne Mattraver (Oliver Jones) is running out of time and money to complete the shoot, and his leading lady Viviene Stone (David Cummings), star of ‘That Bad Cat’, is dead – the result of a tragic accident on set.

This prompts Mattraver to replace Stone with a lookalike (also played fantastically by David Cummings) who just can’t quite nail the dialogue. “You prick!” Thankfully, he has the supporting talent of Mick Salad (Zoe Roberts), Joanna Shoebag (Natasha Hodgson), and Judy Goose (also played ridiculously by Natasha Hodgson), with only one scene left to shoot to finally get ‘Rosemary’s Toddler’ in the can, or so Mattraver had hoped… I mean, the film set might be haunted!? Oh, and Salad’s problematic pet monkey is missing…

Designed and directed by Clem Garritty, Director’s Cut is a ghostly, hilarious farce that has enough fast-paced comedy horror to satisfy an audience that appreciates the 1970s genre films that Kill the Beast pay homage to. Everything is majestically constructed, from the deliberately wobbly, wooden film set, to the daft 70s wigs, to the AV screens that are placed at each side of the stage, displaying catastrophes – and supernatural occurrences – both on and off-stage.

Director’s Cut is an hour of over-the-top comedy theatre that revels in the ridiculous, building chaotic momentum throughout its spooky proceedings, until its final musical number concludes this horrific tale of “the worst film never made”. It’s inventive, uproarious silliness from the “masters of comedy horror” Kill the Beast, and oh boy, is it BOLD. BOLD. BOLD. 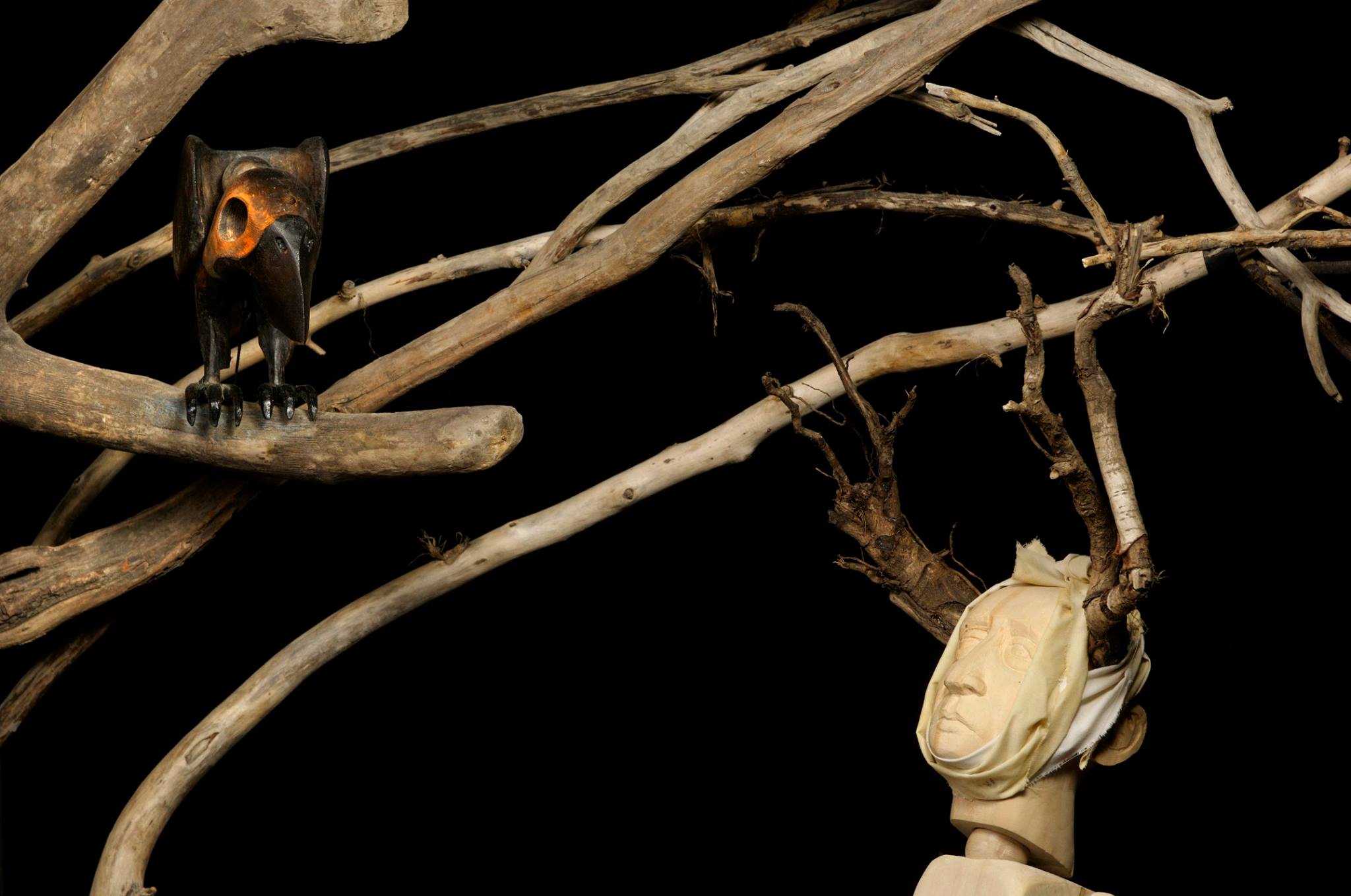 At the Fringe, from behind a beautifully constructed, wooden art deco puppet theatre, situated in Summerhall, I was witness to an array of death scenes from the world of puppetry. This compendium of famous puppet death scenes – entirely made up by the Canadian troupe – evoke our most morbid curiosity: Death! Nathanial Tweak, a puppet contemplating his own mortality, hosts what is a deeply moving, and often hilarious, theatrical production.

Each of the puppeteers on-stage wear ill-fitted suits and make no attempt to blend into the shadows. They are, after all, a large part of this unique show. From ‘The Ballad of Edward Grue’, a cautionary tale of why you should not dress yourself up like a deer, to ‘The Last Whale’, a genuinely moving tale of Earth’s last living marine mammel, to ‘The Feverish Heart’, a Monty Python-esque tale of farcicality, Famous Puppet Death Scenes has us, the audience, forming an emotional connection with each puppet – particularly Nathanial Tweak – as we get lost among grim absurdity and genuine moments of tenderness. Puppets are after all “no mere blocks of wood”.

Nathanial Tweak and The Old Trout Puppet Workshop implore us to care for each uniquely crafted and brilliantly manoeuvred puppet, imbued by The Old Trouts with charm – but also fragility – as each character faces their demise in increasingly inventive ways. Famous Puppet Death Scenes is a macabre series of vignettes, instilled with ghoulish drama, slapstick humour, and genuine horror that must be experienced by everyone. Weep. For yourself. For others. For the puppets. 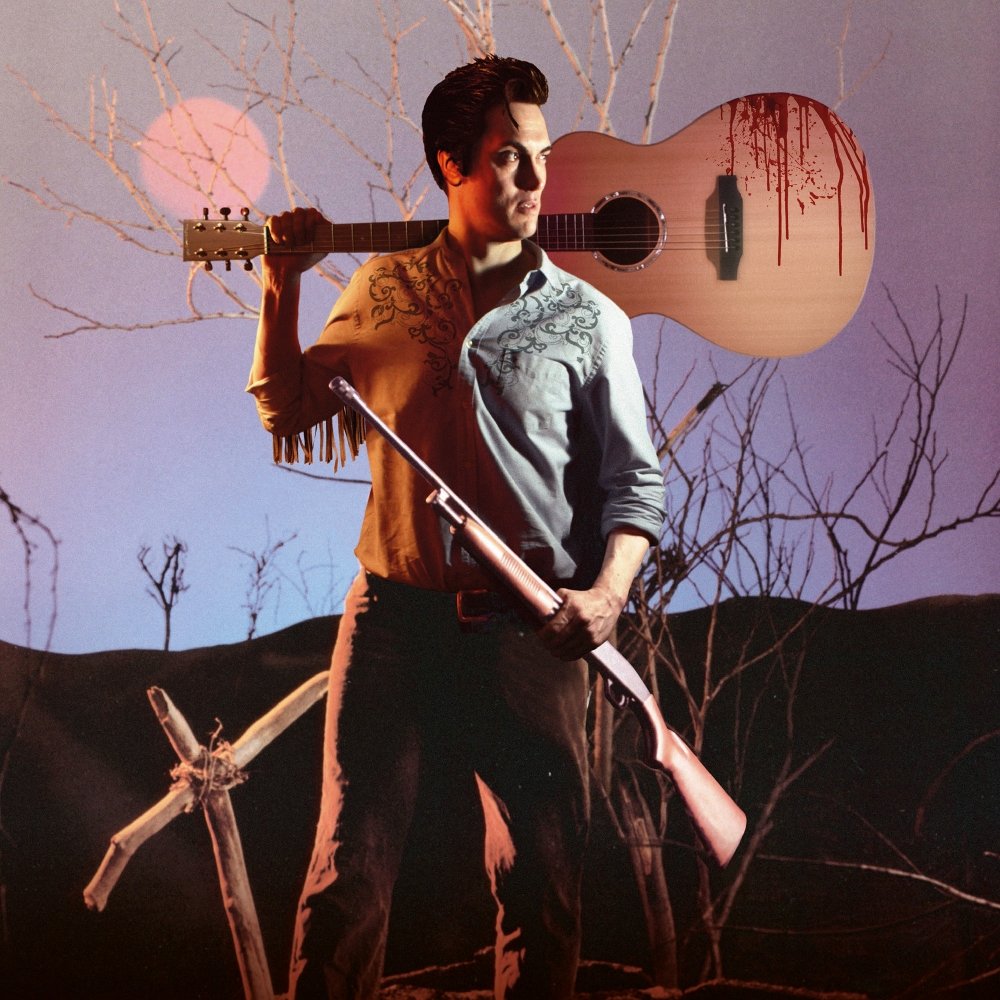 “If this isn’t what you were expecting – well, what were you expecting?”

Rob Kemp’s tribute to the sequel to the ultimate in grueling terror – and the King of Rock ‘n Roll – The Elvis Dead is quite simply a love affair: Sam Raimi’s Evil Dead 2 reinterpreted through the songs of Elvis Presley.

Yes, The Elvis Dead retells the plot of a cult splatstick horror sequel set to the back catalogue of a rock ‘n roll icon. There is absolutely no reason why this blood-splattered tale of demonic possession should work… At the very least The Elvis Dead would require prior knowledge of Evil Dead 2 and/or Elvis Presley’s discography for it to make any semblance of sense, surely?! Rob Kemp himself asks the question towards the end of the show: “If this isn’t what you were expecting – well, what were you expecting?” And yet, it does work. It works extremely well!

Kemp asks the audience to treat The Elvis Dead like a concert, singing and clapping along to each musical number, as he swaps out Presley’s lyrics for his own. But what you may think is a gimmick – an amusing curio and nothing more, quickly becomes an unstoppable solo musical schlock-comedy. Rob Kemp transforms into Ash, the iconic, chainsaw wielding hero from Evil Dead 2; trapped in a cabin in the woods with nothing but a plastic boomstick, a cardboard chainsaw, the Necronomicon Ex-Mortis and the remains of his slain girlfriend (a polystyrene mannequin head!) – previously possessed by ancient demons known as deadites! Oh, and of course his Fringe audience.

For those in attendance that were still not convinced, once Ash’s right hand was possessed – and subsequently hacked off with a chainsaw – Kemp grips the microphone with his remaining appendage to sing a final farewell in Presley’s signature baritone: ‘You Were Always on My Arm’. It was at this moment that it suddenly made sense to everyone in attendance. We were unified and ready to join Rob Kemp in his fight against the Evil Dead; to head on down into that cellar and carve ourselves a witch! But before you can heckle “I swallow your soul”, Kemp will have you singing along to ‘A Hunk of Burning Skull’.

During the performance, scenes from Evil Dead 2 were shown on an upstage screen to keep the uninitiated filled in. Kemp himself also used a variety of lo-fi props to enhance The Elvis Dead – from the aforementioned plastic/cardboard weapons, to a bloody sock he can wear over his hand to look like a stump, to the small spray bottle of stage blood – Kemp soon becomes as bloodied and battered as the character on screen. The dedication Rob Kemp has put into the production of The Elvis Dead is admirable, and you just know the affection he has for Sam Raimi’s 1987 cult classic is genuine.

Made on a shoestring budget with blood, sweat and bodily dismemberment, The Elvis Dead itself is a cult success. “Hail to the King of Rock ‘n Roll, baby!” 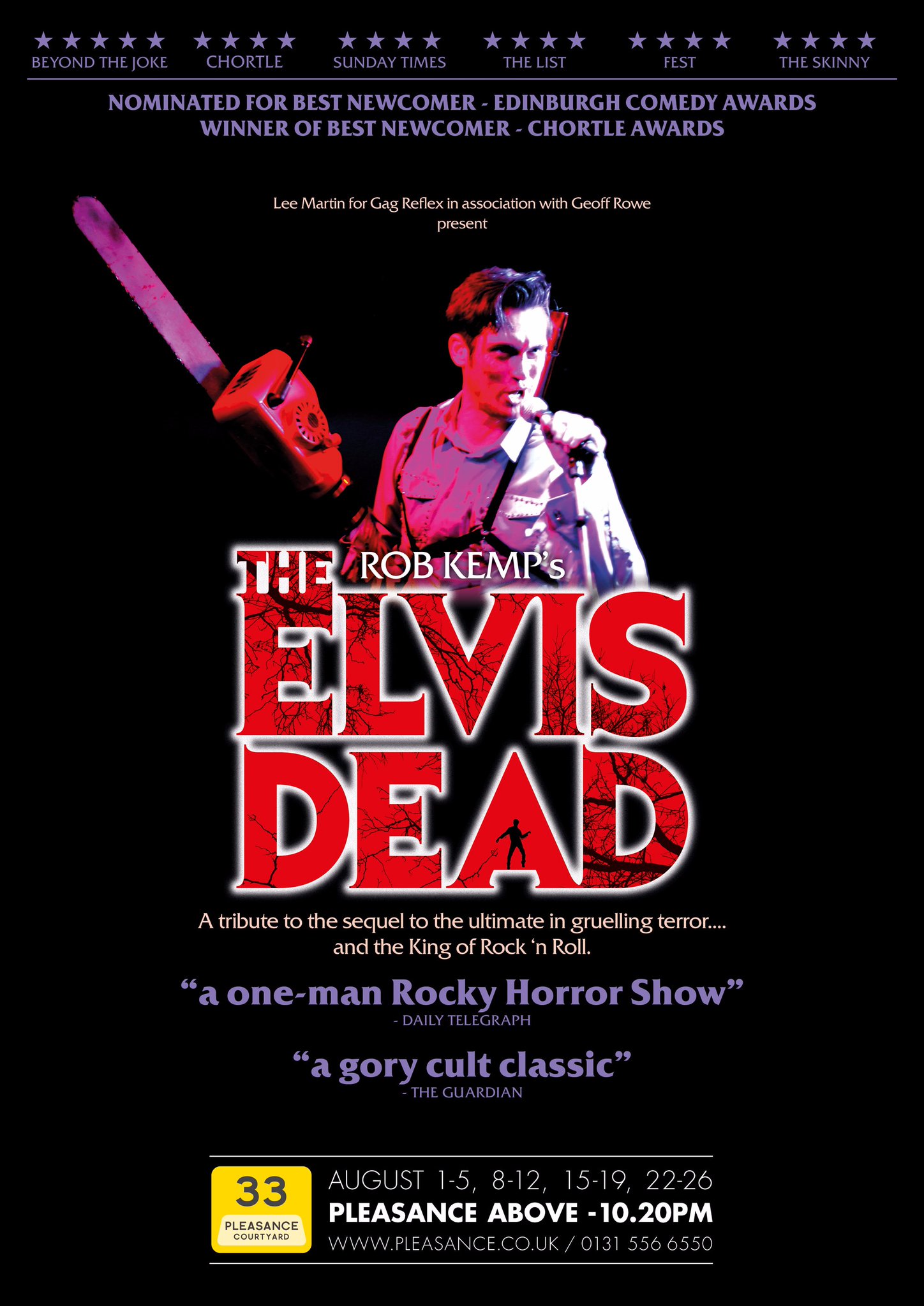