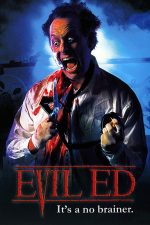 Remember the days when films were captured on, well, film? You don’t? Whippersnapper. Respectable and reserved editor Eddie Swenson does. So when he’s transferred from his quiet, restrained art house section, to the brash, blood soaked vistas of the splatter and gore department, he realises why watching hours and hours of video violence may cause one to lose their head.

You see, his predecessor went out with an, errrm…bang, after chowing down on a hand grenade. So Ed’s boss Samuel Campbell ‘promotes’ him to a domain that produces the ‘Loose Limbs’ series. One whose work based mantra is to keep those heads rollin’. He grinds away in his new position, until eventually Ed’s unable to maintain a healthy work/life balance, and the executions he witnesses on screen, he begins to carry out in reality. 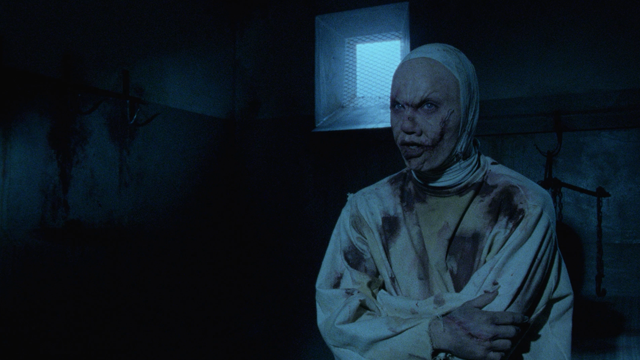 Produced to send up and satirise the ridiculously harsh censorship that Sweden’s cinema bureau imposed from 1911 until 1996, Evil Ed is a love letter to the schlock horror films of the 1980’s. Paying tribute to and borrowing heavily from iconic VHS staples such as Braindead, Re-Animator and The Evil Dead, it employs the same slapstick sensibilities and generous quantities of viscera, which has enabled it to secure its place as a cult gross-out classic. And rightly so. Everything that you would want from the genre is contained within the films 95 minutes. The special effects and prosthetics are as gloriously cheap looking as you would expect them to be, the humour is puntastically off colour, and there’s the ubiquitous tit flashes and busty babes, that do zero to drive the plot, but it just wouldn’t be the same without them. 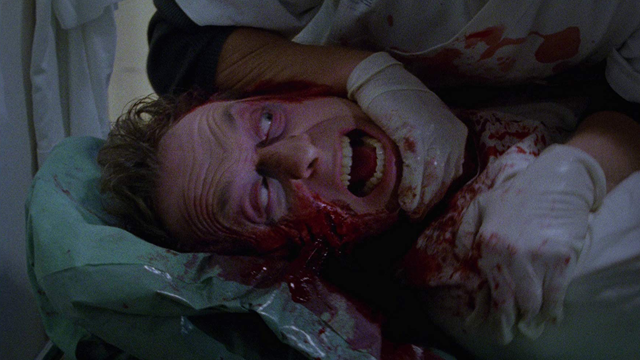 Even though, at times, the dubbing isn’t always spot on, the comedic beats are impeccable, and the slightly off timing only adds to the charm. There’s minimal character development outside of the main cast, and even then there’s little depth, but with a film of this caliber, we know that most players are only involved to end up as body parts. If we’d expected something else, we’d have got a rental from Ed’s art house era. The biggest drawback of the film is that it goes on a bit too long, with a sketchy plot drawn out over an hour and a half. The filmmakers become a bit self satisfying, reveling in their naughtiness, and we begin to lose interest in Ed and his twisted mental breakdown. The plus side of the indulgence is that we do get a lot of references and homages that fans of the genre will adore. From deranged Ed taunting his freaked out wife with “I’m coming to get you, Barbara”, to fridge dwelling gremlin-like puppets that grumble about bright light when their chilled sanctuary is disturbed. The references are plentiful, and a delight to behold. 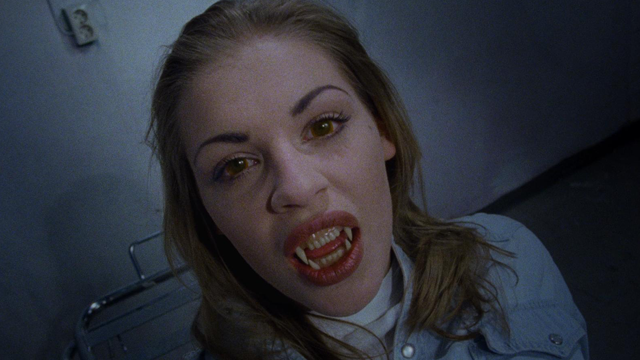 As the troubled protagonist, Johan Rudebeck perfectly embodies both sides of the character. Starting off as a nerdy, bespectacled chap who brings new meaning to socially awkward, he transitions perfectly to become a mentally unstable murder machine, akin to those he had previously abhorred. Olof Rhodin is skeezy and dislikable as Ed’s overbearing boss Sam Campbell, whose name is obvious tribute to those that inspired it, and Per Löfberg is charmingly goofy as the splatter obsessed slacker turned hero. The only real let down is Cecilia Ljung’s Barbara. Not in terms of performance, as she fully portrays the homemaker who can kick some arse, but because her involvement seems like an add-on to include a serial stalker scene. It’s a shame, as the fracas with her bloodthirsty husband would have been a perfect full stop in this homage to horror.

Grumbles aside, this is a gem of a film, and is a must watch for fans of the gross-out genre. Fast paced and tongue in cheek, it loses momentum in the final third, but the creativity and loving tribute to it’s predecessors mean that’s nothing to lose your head over.