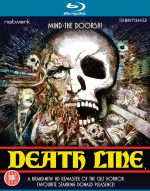 Gary Sherman’s Death Line was first released in London in December 1972; certified ‘X’ and censored by the British Board of Film Censors. Re-titled Raw Meat the following year for US distribution, and also certified ‘X’ by the Motion Picture Association of America in 1973 – before being re-edited to obtain an ‘R’ rating later that same year – I therefore felt nostalgic when the original BBFC ‘X’ cert appeared before the opening credits; as I sat down to watch this high definition, uncut presentation from Network.

After sleazily making his way to the London Underground from the sex district, James Manfred, OBE (James Cossins, Fear in the Night) confronts a woman waiting on the platform at Russell Square tube station. “How much?” he asks. “Look darling, god knows if you are worth it… but fortunately I can afford to find out.” Her response? A swift knee to his gonads before running away! As Manfred winces in pain, something catches his eye emerging from the underground tunnel…

As students Alex (David Ladd) and Patricia (Sharon Gurney, Crucible of Horror) exit the train at Russell Square and leave the platform, they stumble upon Manfred, collapsed at the bottom of the stairs. Alex – an American exchange student – claims to see this sort of thing all the time in New York; a drunk who has fell down and should be avoided. Patricia, however, is concerned, fearing that perhaps he is a diabetic and insisting Alex check his wallet for a medical alert card. In Manfred’s wallet is a club card that entitles him to one free drink. “No diabetic, Patricia… A drunk.” Regardless, Patricia convinces Alex to find a policeman, but when they return to the bottom of the stairs, James Manfred, OBE is nowhere to be found… 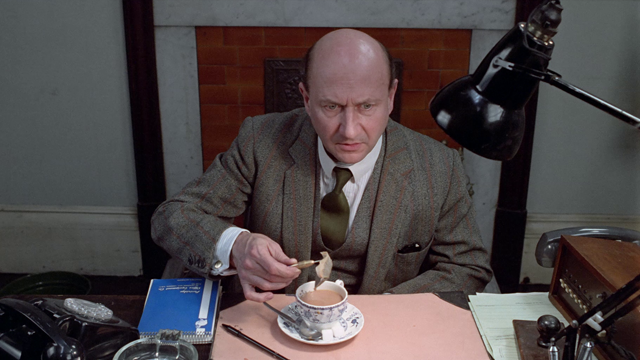 “He’s some big shit… shot, at the Ministry of Defense, or the Home Office, or something.”

Calhoun contacts his colleague, Inspector Richardson (Clive Swift, Dr. Jekyll and Mr. Hyde) to provide him with information regarding the layout of the London Underground tunnels. Richardson describes a closed station at British Museum – between Holborn and Russel Square. The South London Company were tunneling down there in 1892, when a whole section collapsed, burying a number of men and women.

Interestingly enough this became quite the scandal at the time, because the company involved went bankrupt, and they couldn’t afford to dig the bodies out. So they abandoned them, and they abandoned the entire line. Surviving tunnelers believed that there could be air pockets that would allow those trapped to be able to breath and survive. But the company refused to listen. 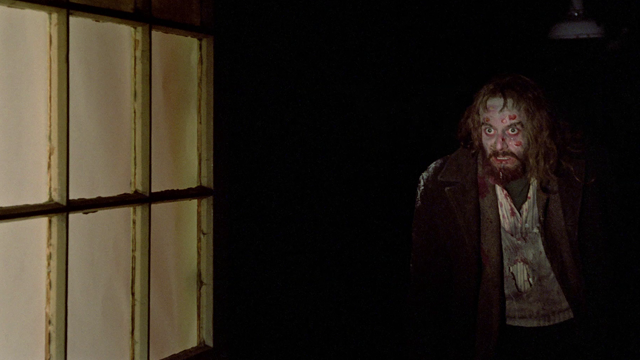 “How could they survive without food?” Rogers asks. Richardson looks up at the ceiling in contemplation before providing his grim response… “There’s plenty of water… and food, because I should imagine as each one died, the others ate him.”

It was interesting to learn that Death Line is not only Gary Sherman’s debut feature, but a film in which he co-wrote, and was granted complete creative control. My first introduction to Gary Sherman was upon watching 1981’s Dead & Buried, a horror film that was intended as a dark comedy but suffered a lot of interference from PSO International, which resulted in Dead & Buried being classified as a video nasty in the United Kingdom. Death Line is the dark comedy that Dead & Buried could have been. It’s subtle – mostly coming from Donald Pleasance’s unique performance of idiosyncratic police inspector Calhoun – but the comedic banter between Pleasance and Norman Rossington punctuates Death Line’s revolting premise. 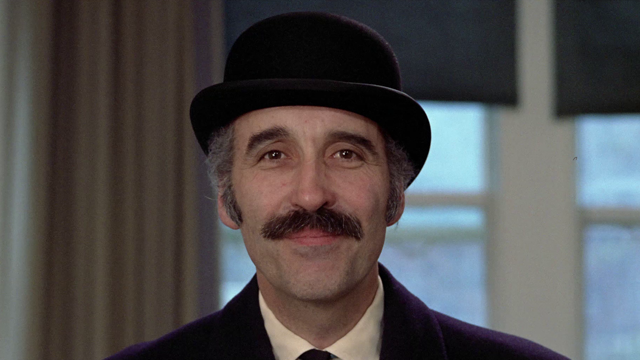 Christopher Lee also portrays a member of the British security service MI5, in a scene written specifically for him. This scene gave Lee the opportunity to work with Donald Pleasance, and although his appearance is brief, Lee versus Pleasance in a war of witty insults was an absolute joy to watch. I’m not sure why the two were not paired in film more often.

However, it is Hugh Armstrong’s performance as the last of a cannibalistic generation of London Underground tunnel dwellers, that really differentiates the remarkable Death Line from all other British horror released during that era. Before his introduction, Gary Sherman utilises a slow, single-take tracking shot that conveys the incredible situation that Hugh Armstrong’s ‘The Man’ finds himself living in. This artful tracking shot contains no dialogue or music, and yet we learn so much during its short stomach-churning duration. It is one of Death Line’s most grotesque moments – ‘The Man’ blistered with sores, living among half-eaten, rotting corpses – and one worthy of its ‘X’ certification at the time. 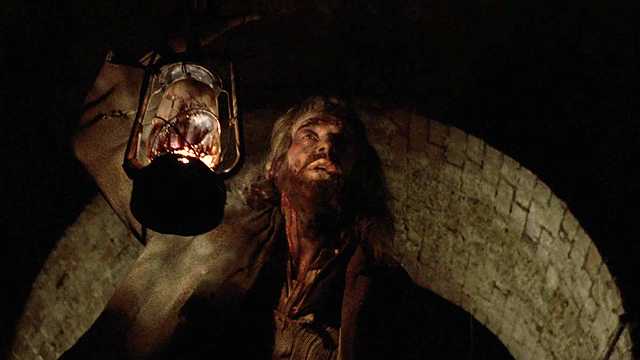 Hugh Armstrong’s performance throughout Death Line is emotionally affecting, and I found myself expressing more sympathy towards ‘The Man’ than I did any of his victims. ‘The Man’ is reminiscent of Frankenstein’s monster; frightened, and far removed from human society. There are no heroes or villains in Death Line… only survivors.

Death Line is presented on Blu-ray for the first time in the United Kingdom; courtesy of Network’s The British Film series – newly scanned to 2K resolution from the original 35mm camera negative, and extensively restored in its original theatrical aspect ratio of 1.85:1. Network’s restoration reportedly involved careful grain management, the removal of film dirt and damage, and the correction of major instability, warping and density fluctuations. Grain is still present during the presentation which I was relieved to see. I believe film grain adds to the overall experience of viewing cult horror at home and, where Death Line is concerned, it doesn’t detract from the cannibalism. 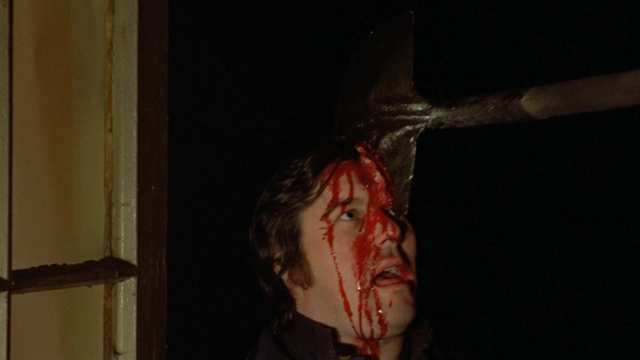 This high definition release also includes a limited edition collectable booklet written by Laura Mayne, and an interview with actor Hugh Armstrong – previously included in the US Blu-ray release from Blue Underground. During the interview Armstrong provides insight into his life and acting career, including his sympathetic portrayal of ‘The Man’ in Death Line. With a running time of approximately 15 minutes, it left me wanting to learn more from Hugh Armstrong – about his career and his performance in Death Line – so I was disheartened to learn that he had passed away in 2016. The interview itself was dedicated in his memory.

Death Line is often darkly hilarious, but also gets under your skin with its commentary on social inequality. The shift in tone between Inspector Calhoun’s satirical sense of humour, and the horrors ‘The Man’ perpetuates to survive elicits a mixture of emotions from its audience. Yes, laughter, but also sympathy and repulsion. I am bewildered that this cult classic remains a largely forgotten British horror masterpiece. Perhaps this release from Network will result in Death Line being discovered by a new generation. Its social commentary is, after all, as relevant as it ever was. Tea, anyone?