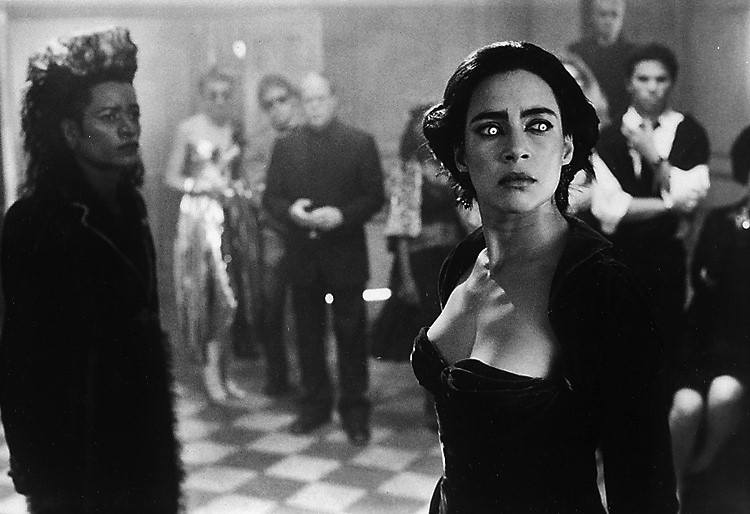 When devising a list of my all-time favourite horror films Fright Night is always right up there. In fact, although it doesn’t hit top spot (that being The Exorcist), it’s a film I’ve probably watched more as it’s far more enjoyable.

What’s always worked for me with Fright Night is it fused nostalgia and modern, and even though it’s clearly an 80’s movie the tone today is as fresh as ever. It’s funny, scary, has great set pieces, fantastic performances, dark and light, and is amazingly directed. It fully deserves to be acknowledged as a cult classic. They just don’t make them like that anymore!

When Fright Night Part 2 was released, minus the direction of the great Tom Holland, I was as apprehensive as when the current remake came along. Although the remake had snippets of likability with a decent performance from Colin Farrell, you just can’t replicate the magic of the original. Fright Night Part 2 had NO right to be good, but somehow managed to become its own beast and definitely one of the strongest sequels ever. It’s fun, adds strong characters, and its own cool set-pieces. Tommy Lee Wallace did a grand job, once again written by Holland.

The sequel would only work if its main vampire – following the iconic Jerry Dandrige – was strong. Regine Dandridge, the sister of Jerry, was played wonderfully by Julie Carmen. Sultry, sexy with a huge element of danger, Carmen truly became part of the Fright Night universe with this performance.

It’s always a pleasure getting the chance to speak in depth to the people that lived, breathed and starred in your all-time favourite movies.

May I present… Julie Carmen. 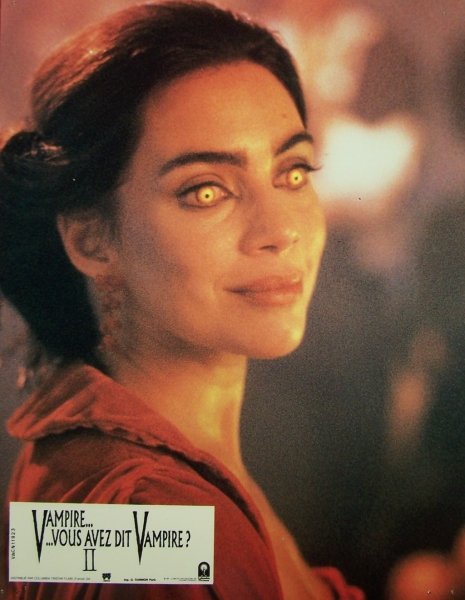 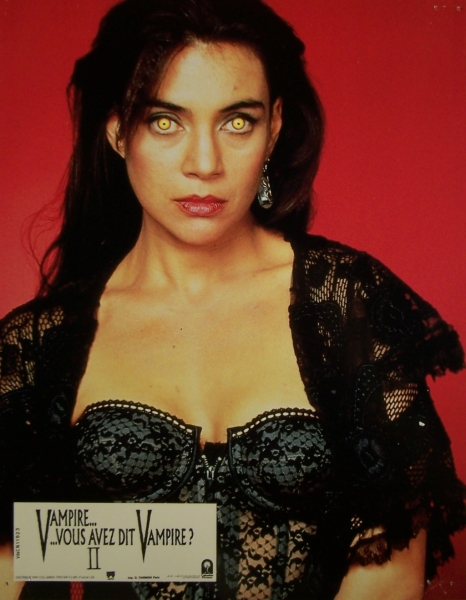 Stephen Harper: Julie, thank you so much for taking the time to speak with us, it truly is a huge honour. You’ve starred in some of the coolest and most loved 80’s TV shows ever, such as Remington Steele, T. J. Hooker, The Fall Guy, Airwolf, Cagney & Lacey and my personal favourite Highway to Heaven. Looking back, it must have been a wonderful experience and a great time in your life?

Julie Carmen: Funny how my British friends are enamored with American TV of that era, but I adored coming over the pond to work with auteur European directors making German expressionist cinema and Spanish passion films. When guest starring on American episodic television there’s no time for rehearsal, barely time for costume fittings and bonding with your co-star feels like speed dating, but none of that can affect quality because millions of people are guaranteed to see it. Therefore, guest starring on American episodic TV, an actor’s bread and butter, can feel like ‘short order gourmet cooking’.

Stephen: Did you always want to act? And if you hadn’t, what career path do you think you’d have followed?

Julie: Psychoanalysis. At eighteen I wanted to be a psychoanalyst because I had nightmares and a Gestalt therapist had me talk to the visions and ask them what they want from me. It worked. But I’d danced all my life and knew I couldn’t sit still long enough to actually do analytic work. Now, after decades of acting, I finally got licensed as a psychotherapist. I only see 6-8 patients a week but love it.

Stephen: We could chat about your fabulous TV career all day, but I’ll be totally honest I’m bursting at the seams to discuss Fright Night Part 2! Obviously you’ve probably been asked these questions repeatedly, but I’m a HUGE fan of the two films so please forgive me. What was it like working on such an iconic film? How did you land the part? What was the process? And were you aware of the first film before shooting?

Julie: Neither Fright Night Part 2 director Tommy Lee Wallace nor In the Mouth of Madness director John Carpenter had me audition. Fright Night Part 2 was offered while I was in New Mexico shooting The Milagro Beanfield War for Robert Redford. But John Carpenter had me go to his house and we chatted about the state of civilization. I’d worked for his wife, producer Sandy King Carpenter, on a movie-of-the-week for TV called She’s in the Army Now opposite Jamie Lee Curtis, Kathleen Quinlan and Melanie Griffith, in which we did army basic training together. That was before Jamie did Halloween for John. I guess Sandy poached us both from that TV show. 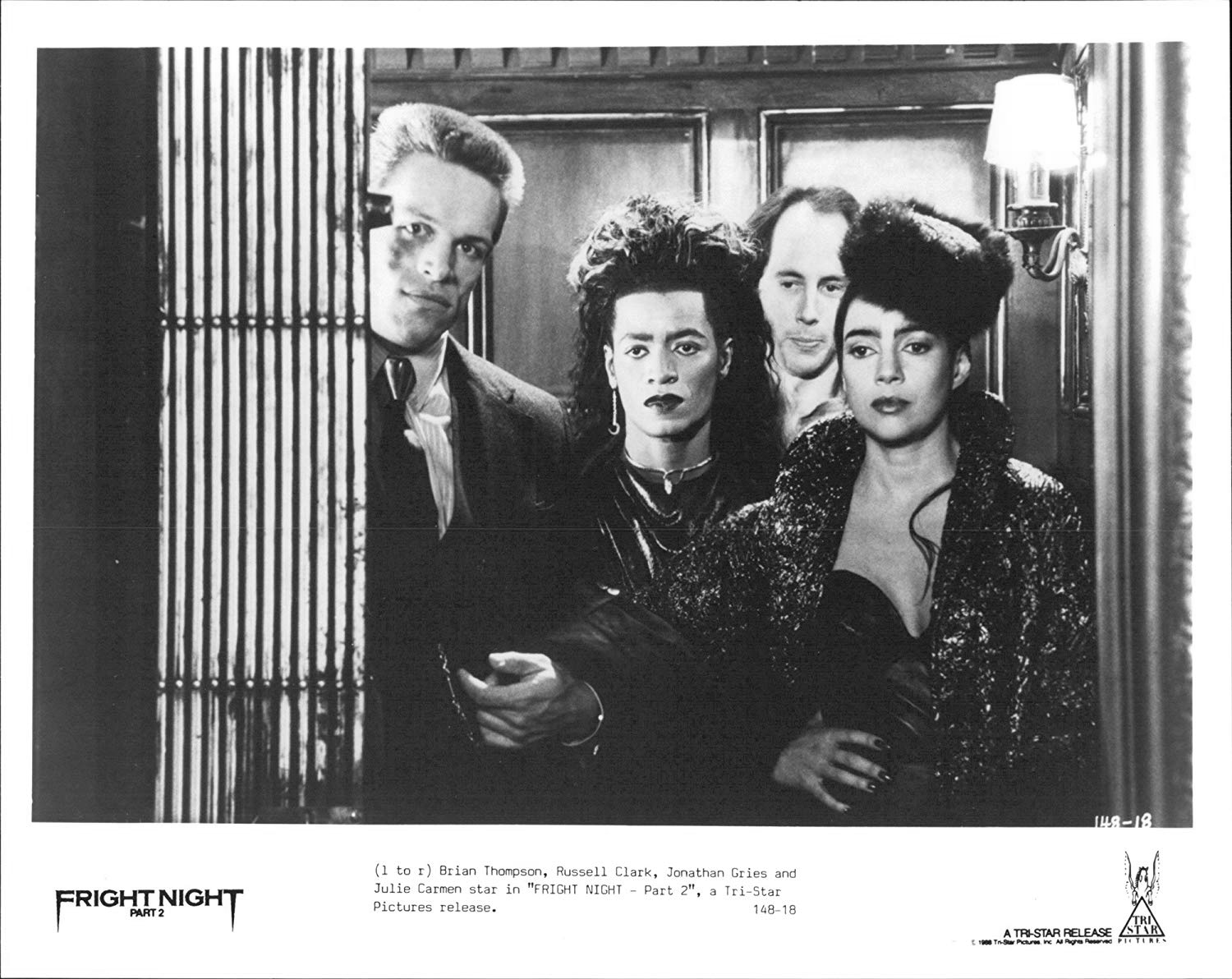 Stephen: The first film is untouchable in my book and near enough faultless. Director Tom Holland is a genius who doesn’t get enough credit. When the second installment was released I was slightly hesitant because Jerry Dandridge was missing, but your performance as Regine was so captivating that it seduces the audience. What influenced you in your role and were you daunted by doing a sequel to a much loved original?

Julie: Honestly, I didn’t watch Fright Night before shooting our sequel. As you now know, I like to work from my own unconscious and birth the character from where the script takes my imagination. I did read Bram Stoker’s Dracula and I spent time contemplating eternal life. Actors need to know their own process and protect it. I didn’t want Regine to be derivative of the work Chris Sarandon so beautifully did in Fright Night. She needed to stand on her own.

Stephen: Tell us of your experiences working with director Tommy Lee Wallace? He’s a director I’ve always admired from his work on IT and Halloween III: Season of the Witch.

Julie: Tommy Lee Wallace directed with the magical wand that makes an actor feel loved and free to explore. He gives license for expansiveness. As Regine evolved, Tommy surrounded me with the very best costume designer, choreographer, cinematographer, make-up team, composer and co-stars. We had fun on the set but Tommy maintained a respectful atmosphere for the seriousness of the plot to breathe. I had only worked in the genre of camp on stage with a troupe of transvestites at Theater for the New City and the Bouwerie Lane Theater on the Lower East Side of New York while I was still in high school. I tend to be totally invested in the reality of the story we are telling so there’s never an internal critic commenting. Campiness is in the subjective view of an audience, it’s not the actor’s intent. Tommy Lee Wallace supported that.

Stephen: Your role is so iconic in a movie that’s adored by so many. Is it overwhelming that you’re instantly recognizable from playing Regine to this day?

Julie: Fright Night Part 2 would have evaporated into the ethers if it were not for some dear loyal souls who originally saw the film and who continue to talk about the effect it had on them while growing up. Maybe Regine exposed them to a world of elegant debauchery they’d never seen before. I’m humbled and grateful to Cult Screenings UK for their perseverance and wit. They actually got the rights to include many of our original scenes from Fright Night Part 2 by interweaving them with current interviews that we all recently taped at a studio in Hollywood and at Tom Holland’s home. 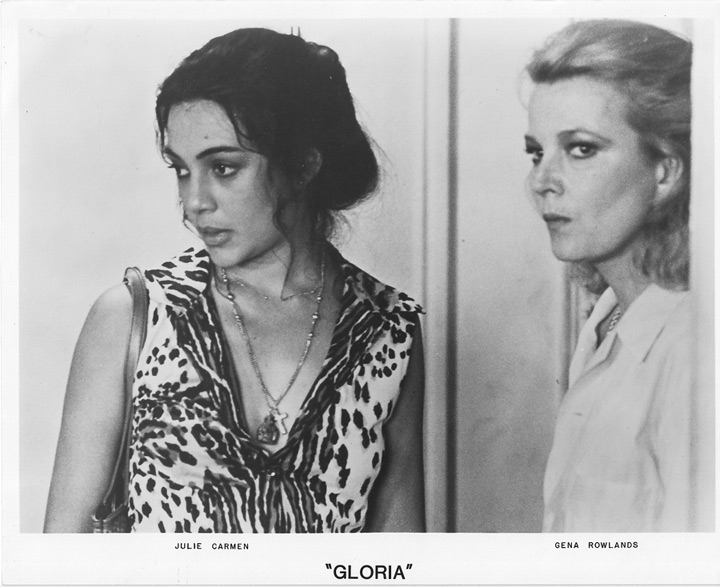 Stephen: I was always kind of bummed that a third part of the series was never made. I’ve since heard the stories that it was actually discussed at great length, but to no avail. That’s before it fell into the shoddy hands of the reboot/remake people. Have you seen the remakes and what’s your take on them?

Julie: No, I have not seen the reboot/remake. I learned that from Gena Rowlands. We attended a 35mm screening of the John Cassavetes film Gloria that we did together and I asked whether she’d seen the Sharon Stone reboot/remake. Gena was reserved and diplomatic but said she was not interested in seeing it.

Stephen: Your next big role was In the Mouth of Madness, another brilliant movie. What was this experience like?

Julie: As the 21st Century unfolds, I’m constantly reminded of the two weeks when John Carpenter, Jurgen Prochnow and I rehearsed for In the Mouth of Madness, before Sam Neill flew in from New Zealand. John felt that throughout history we’ve seen art become more twisted and articulate at the end of a century and especially a millennium. We shot the film in 1993 when everyone felt anxiety about the new millennium. John prophesied that the first decades would bring fundamentalism, concretized thinking and reactionary strict codes of conduct, due to great fear of the unknown. These are my words as I try to recall exactly what he said but it really made an impact. I felt it was his directorial concept that we were being asked to convey.

Michael de Luca’s script was based on H.P. Lovecraft’s At the Mountains of Madness but, in retrospect, it’s really extraordinary that John Carpenter, producer Sandy King Carpenter, and Bob Shaye of New Line Cinema got the film made.

Philosophically speaking, success is in the eye of the beholder. From the point of view of Zen and the Art of Film Distribution, I think John Carpenter’s In the Mouth of Madness was a bull’s eye. 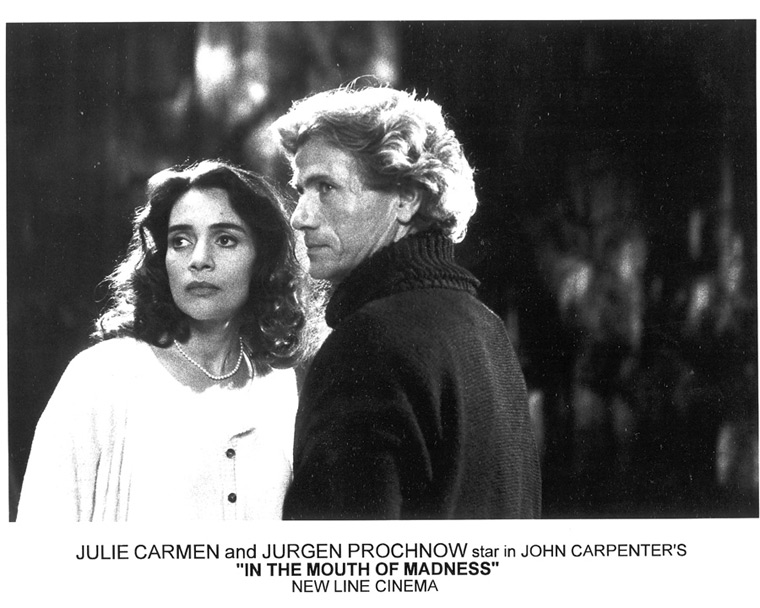 Stephen: You’ve continued to work consistently since the late 70’s – that’s quite phenomenal for an actor as there’s normally a shelf life. What’s the secret?

Julie: Shelf life is more of an issue for women than men in Hollywood. In most casts, there are dozens of male roles and one ingénue, and maybe her friend or adversary.

I dwell on the internal work, not the career so I don’t have to worry about fickle box office clout. I’ve never been mainstream casting and have always been the peculiar choice of some director who remembered some role they loved. If I think of myself as a character actress now that I’m older, it’s very freeing. I plod along memorizing Shakespearean sonnets because my current teacher Patsy Rodenburg told me to, but I never stop wishing on a star and believing that unexpected luck will drop out of the sky.

Stephen: What’s your favourite horror film and what was the first film that truly frightened you?

Julie: The first film that terrified me was The Abominable Snowman. When the camera panned up from his feet to his massive body, I abandoned my brother and ran to the lobby and hid behind the popcorn machine.

But nowadays, there’s nothing scarier than what we see on the news, the shortsighted damage we’re doing to Earth’s natural resources, the destruction of ethnic minorities in the name of religious swagger, the enslavement of women and children by authoritarian regimes and intimidating name-calling to squelch the quieter voices. Cruelty in cinema can give us perspective and insight but I’m not a fan of horror as an adrenaline rush or a desensitizing mechanism, I prefer horror movies that elucidate the human condition.

Stephen: Which directors would you love to work with?

Stephen: If you could star in a remake of any film what would it be and who would you get to direct?

Julie: Actually, I prefer to be surprised. I’m a shape-shifter and a yogi who loves well crafted indie films with deep themes, but lately my main requirement is that a film be released. It’s disheartening to invest time and love into a good film with a limited release. Therefore, the more mainstream projects are a better gamble.

Stephen: Julie, you’re an absolute legend in our eyes and will forever be loved for your portrayal of Regine. We wish you all the very best.