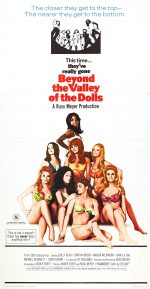 There are so many back-stories and interesting behind the camera plot-lines that Russ Meyer himself would be hard pressed to invent similar tales. Distinguished film critic Roger Ebert helped write the screenplay (in addition to two other films by Meyer), surprising because, while Ebert would praise [the] occasional exploitation film (The Last House on the Left) he generally held a dim view of horror and slasher cinema.

Ms. Susann was not pleased with the appropriation of her novel’s title and sued 20th Century Fox for damaging her reputation. The case wasn’t settled until well after the author’s death, and resulted in a $2million judgment against the studio.

Originally intended as a sequel to Valley of the Dolls, Susann was asked by 20th Century Fox to write a screenplay but declined. Meyer and novice screenwriter Roger Ebert then put together a script in six weeks. The pair wanted a movie that would be a farcical look at “Hollywood conventions, genres, situations, dialogue, characters, and success formulas, heavily overlaid with such shocking violence that some critics and audiences didn’t know whether the movie ‘knew’ it was a comedy”. 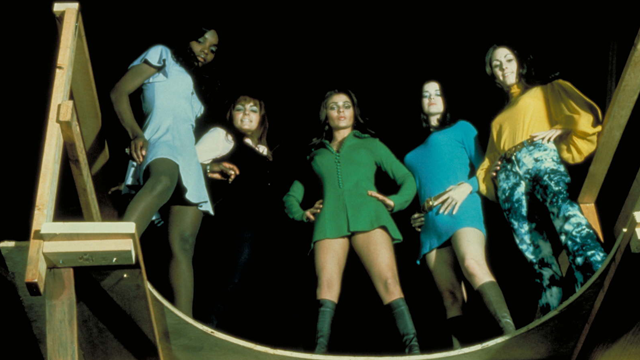 Russ Meyer’s intention was for the film to “simultaneously be a satire, a serious melodrama, a rock musical, a comedy, a violent exploitation picture, a skin flick, and a morality tale (so soon after the Sharon Tate murders) of what the opening crawl called the oft-times nightmarish world of Show Business.”

The plot is more or less a classic tale of the innocent girl going to the big city, where, corruption, depravity and death await. In this particular case, we have three damsels, Kelly (Dolly Reid), Casey (Cynthia Myers) and Petronella (Marcia McBroom). Reid and Myers were Playboy centerfolds, with Myers having the distinction of the first Playmate born in the 1950s. Her original photos were taken when she was only 17, so Playboy had to wait until Myers was 18 to publish the pictorial. Reid would later marry famed American comedian Dick Martin (star of the hit comedy show Laugh-In), divorce and remarry him. 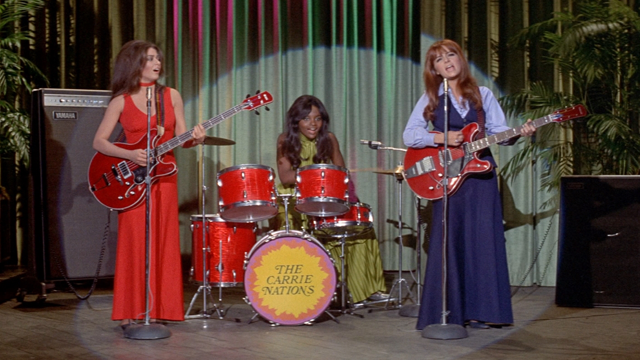 Susan welcomes Kelly and her friends, promising a portion of her inheritance to her niece, but Susan’s sleazy financial advisor Porter Hall (Duncan McLeod) discredits them as dirty hippies “who probably smoke grass” in an attempt to embezzle her fortune himself. Undeterred, Susan introduces The Kelly Affair to a bizarre, well-connected rock producer, Ronnie “Z-Man” Barzell (LaZar), who coaxes them into an impromptu performance at one of his outrageous parties (after a set by real-life band The Strawberry Alarm Clock). Kelly’s band is so well-received that Z-Man becomes their Svengali-style manager, changing their name to The Carrie Nations and starting a long-feud with Harris.

Z-man is an odd character in a movie full of odd characters. His speech is a strange mixture of faux-Shakespearean blank verse, mixed with hip 60s lingo. He also has a Nazi-admiring man servant (a theme in some of Meyer’s films) who Z-man reminds to “turn off the ovens” as the man servant leaves for the evening. 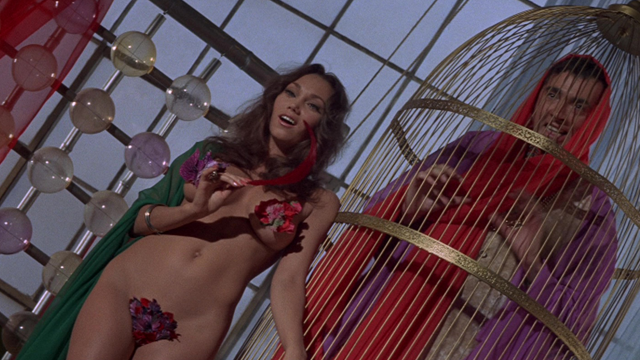 Kelly drifts away from Harris and takes up with Lance Rocke (Michael Blodgett), a gigolo who wants Kelly’s inheritance for himself. Harris at first fends off the advances of porn star Ashley St. Ives (Edy Williams, one-time Meyer’s wife) but after losing Kelly, he allows Ashley to seduce him. Ashley soon tires of his conventional nature and inability to perform sexually due to increasing drug and alcohol intake. Harris descends further into heavy drug and alcohol use, leading to a fistfight with Lance and a drug-fueled one night snuggle with Casey which results in her being knocked up. Kelly ends her affair with Lance after he severely beats Harris. Casey, distraught at getting pregnant then has a lesbian affair with clothes designer Roxanne (Erica Gavin), who pressures her to have an abortion. Are you still with me?

Meanwhile, Petronella has a seemingly enchanted romance with law student Emerson Thorne (Harrison Page). After a romance style novel meeting at Z-Man’s party, they are shown running slow-motion through golden fields and frolicking in a haystack. Their fairy-tale love affair frays when Pet sleeps with Randy Black (James Inglehart), a violent prize fighter, supposedly based on Mohammed Ali, who beats up Emerson and tries to run him down with a car.

His self-destructive behavior finally catches up to him and Harris does a swan dive off the rafters in a TV studio where the Carrie Nations are performing. Some say it was a cry for help but I just saw it as a means of getting attention. Anyway, Harris survives but is a paraplegic as a result of his injuries. Kelly devotes her life to his recovery, pretty much giving Harris what he wanted all along.

Emerson eventually forgives Petronella for her dalliance with the pugilist. Casey and Roxanne have a steamy, intimate romance, but their happy Sapphic love fest ends when Z-Man invites Casey, Roxanne, and Lance to a psychedelic-fueled party at his house. After Z-Man tries to seduce Lance, who spurns him, he reveals that he has female breasts, meaning he is really a Z-Woman. Z-Man then goes on a murderous rampage: he beheads Lance with a sword, stabs his servant Otto (Henry Rowland) to death, and shoots Roxanne and Casey, killing them.

Harris, Kelly and Petronella arrive at the house and see the carnage, then dispatch Z-Woman. A happy result is that Harris can now move his feet, meaning his recovery. A prologue shows everyone has a happy ending except Porter.

Looking at the film as a whole it is a curious work. Billing itself as a satire, the actors appear to have taken a different approach resulting in a convoluted narrative. Some script changes made at the last minute made the narrative incongruous if not unnecessary, such as Z-Man’s exposure (no pun intended) as a woman. 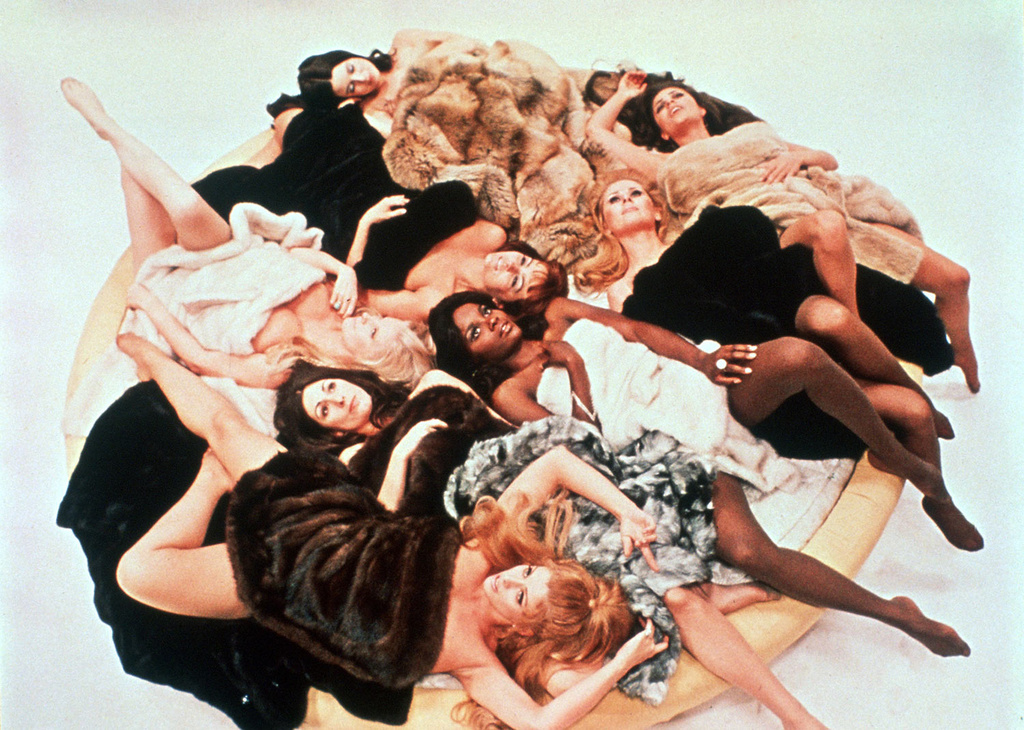 The film also has an uneven cinematic style. Some scenes are shot with great care and atmosphere, such as when Z-Man sticks a gun down Roxanne’s gullet, who fellates the weapon in her sleep, before her brains are blown out. Then again, some of the interior scenes appear like TV shows in their quality and camera work. Looking back at the film in 1980, Roger Ebert said to Film Comment:

“I think of it as an essay on our generic expectations. It’s an anthology of stock situations, characters, dialogue, clichés and stereotypes, set to music and manipulated to work as exposition and satire at the same time; it’s cause and effect, a wind-up machine to generate emotions, pure movie without message.”

In the ironic world of Hollywood the movie was a tremendous financial success. Not only that, the distinguished newspaper, The Village Voice named it one of the top 100 films of all time. The work deserves its place in cult film lore, although I find a host of similar films more worthy. If I have one quarrel with the film it’s the violence which seemed to make light of the Sharon Tate murders, with the release coming so close to those atrocious crimes. Unlike some other exploitation films, Beyond the Valley of the Dolls lacks a true sense of humor to ameliorate the terror.