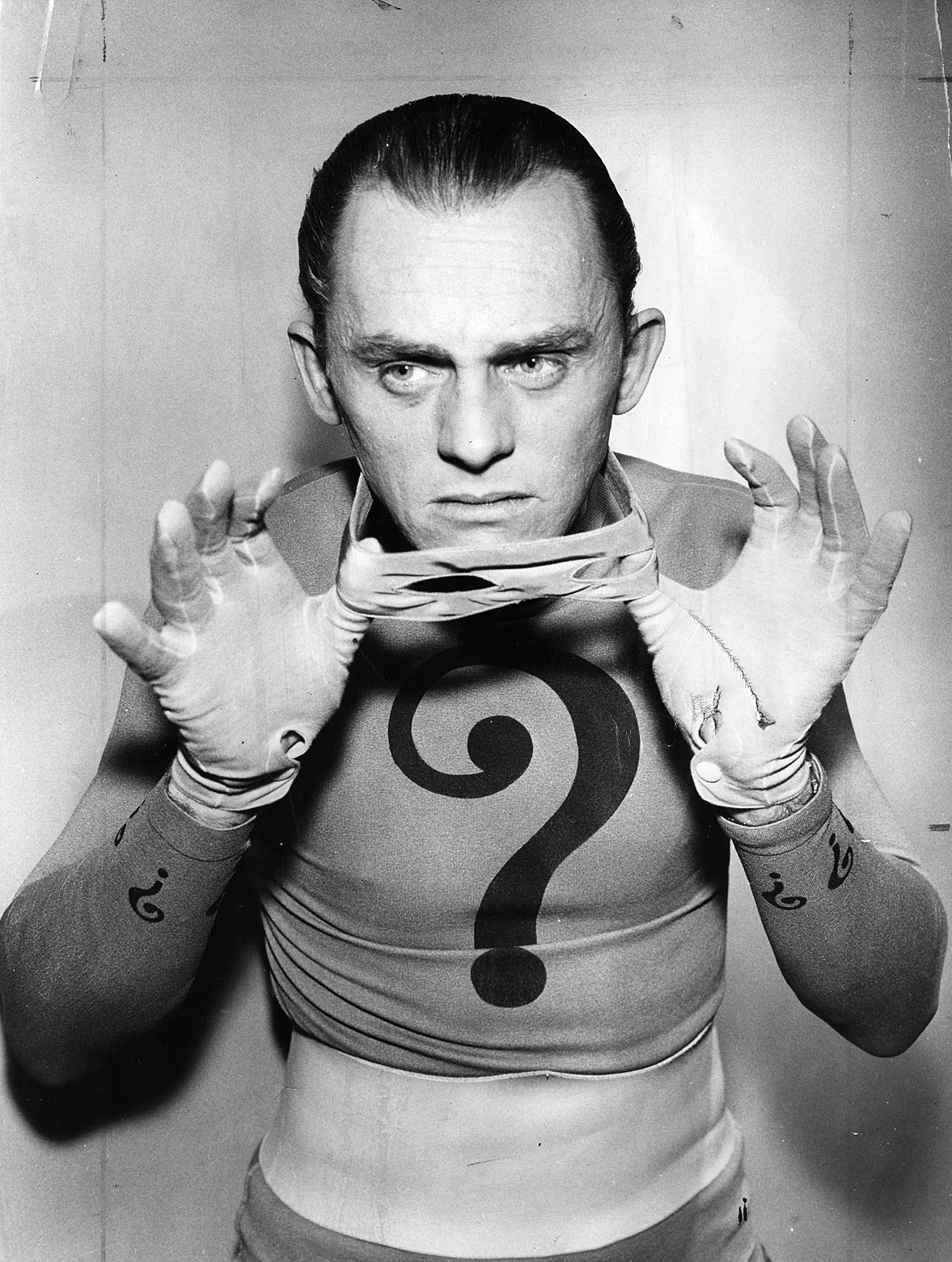 The Riddler just can’t help himself.

Intent on showing off his intellectual superiority, he leaves riddles behind that once decoded, spell out the details of his criminal schemes.

The Riddler would stand a good chance of successfully carrying out his various heists and capers if he kept more details to himself, but then he wouldn’t be the unhinged Riddler we all know and love.

Viewers of the 1960’s Batman series were introduced to the Riddler in the very first pair of episodes. The supervillain went on to appear three more times in the first season, making him the most frequently seen of Batman’s adversaries. In all four of his ‘Season One’ appearances, the Riddler was played by noted character actor and master of celebrity impersonations Frank Gorshin.

In addition to his habit of leaving clues disguised as riddles, the criminal mastermind was distinguished by his high-pitched, cackling laugh, his bowler hat, and his trademark visual motif, the question mark. He is seen wearing either a green suit embellished with small question marks, or a green unitard with a large question mark on the chest. The Riddler accessorizes the unitard with lavender gloves and a matching domino mask. He is also sometimes shown carrying a cane with a question mark-shaped crook at the top. 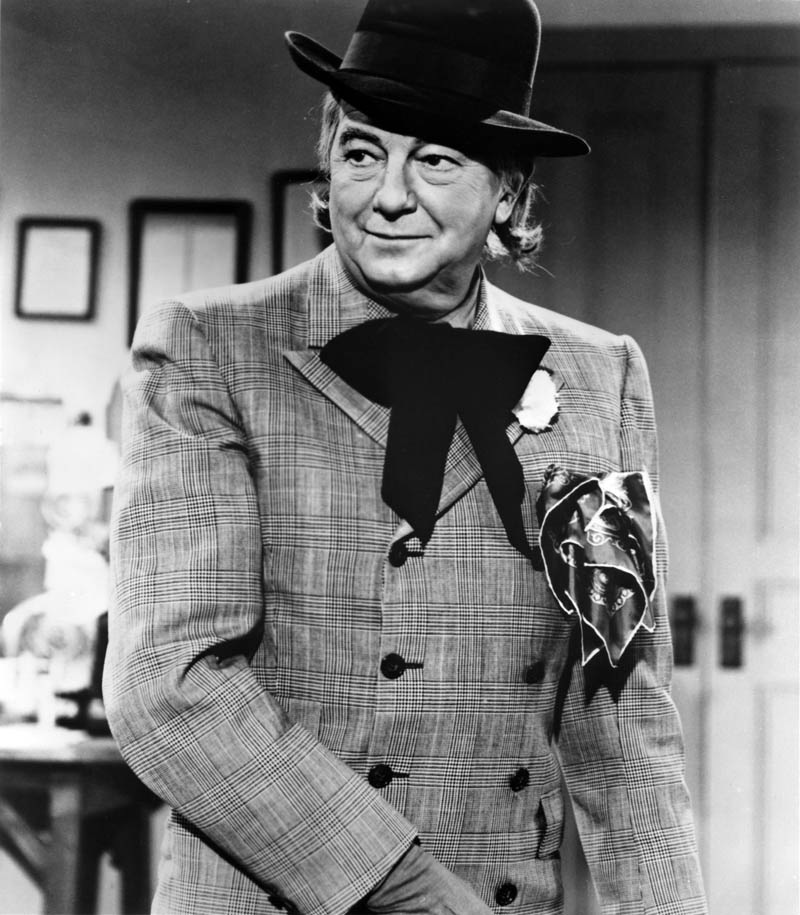 Gorshin brought a unique energy to the role. He gave the Riddler a manic, eye-popping presence and obvious glee in outwitting Gotham’s police force. The distinctive laugh was Gorshin’s own; after trying numerous variations, the actor decided that the way he normally laughed had just the right balance of amusement and insanity. Gorshin’s performances in the first season were so fantastic, it earned him an Emmy award nomination.

When it came time to film the second season, Gorshin held out for more money in light of his character’s popularity and his Emmy recognition. Unable to meet Gorshin’s demands, the show’s producers hired Maurice Evans to play a role dubbed the Puzzler. The script for this pair of episodes had been written for Gorshin’s Riddler, and the Puzzler character was an obvious cut-rate knockoff. He appeared only in “The Puzzles Are Coming/The Duo Is Slumming” episodes. 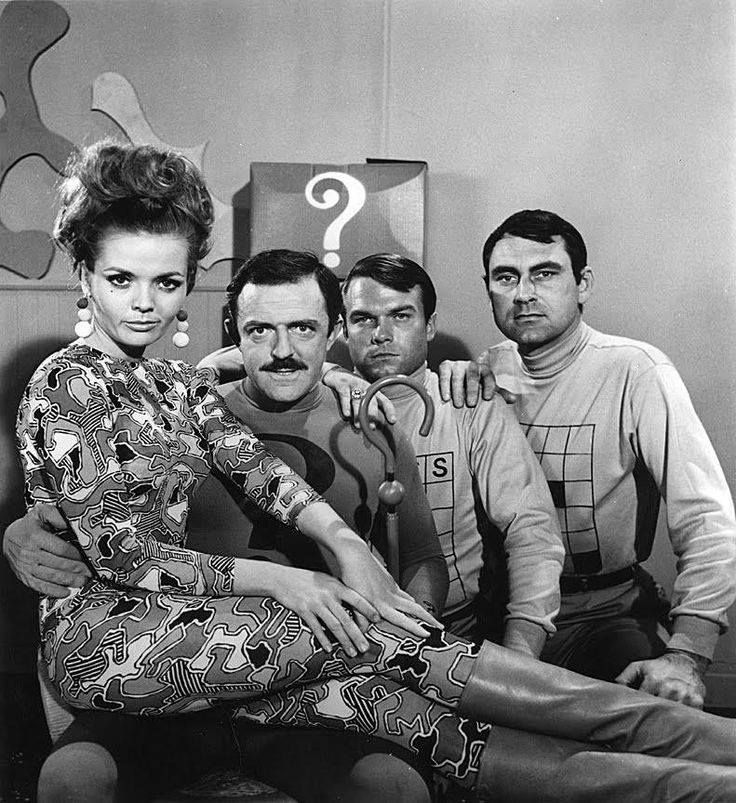 Later in Season Two, the Riddler returned, this time played by John Astin. Primarily known as Gomez Addams, patriarch of the Addams Family. The episodes (“Batman’s Anniversary”/”A Riddling Controversy”) made no acknowledgement of the casting change, but audiences weren’t fooled. Astin was a great Gomez, but he lacked the powerful unhinged energy that Gorshin projected.

Gorshin returned for Season Three’s “Ring Around the Riddler”, his salary requirements being satisfied this time. In this episode, the Prince of Puzzles teams up with the alluring Siren, played by Joan Collins, and attempts to gain control of Gotham’s prizefighting. With some timely intervention from Batgirl, Batman captures the Riddler and he does not appear again in the series.

One of the most prominently featured members of Batman’s ‘Rogues Gallery’, Frank Gorshin’s Riddler was an indelible villain. Always exciting and intriguing, you never knew what he was planning next.