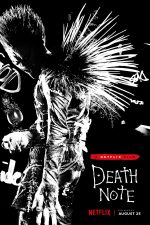 Based on the Manga by Tsugumi Ohba and Takeshi Obata, Death Note is a huge franchise in Japan. It has spawned countless spinoffs, including an anime, a TV drama, three stage musicals and three Japanese films. It has an enormous fan base around the world, so it’s hardly a surprise that Netfix was quick to grab and adapt it in its endeavour to ‘internationalise’ the most popular and beloved Japanese IP titles.

The Netflix remake follows the original story in as far as smart high-school student ‘Light’ Turner, (so named in this version), stumbles across a curious notebook, simply entitled ‘Death Note’, which he feels compelled to take.

It transpires that the notebook is invested with supernatural powers which allows the owner to kill anyone, simply by picturing the target’s face and writing their name on a page of the book. One can choose the method of death and influence the behaviour of the subject prior to execution. However, part of the deal is, that along with the book comes one of the most visually unusual, creepily-grinning, apple-munching (Asian) ‘death gods’ you’re ever likely to see, named Ryuk (here voiced, inevitably, by William Dafoe, but played by Jason Liles).

However, the main reason that the Death Note franchise is so popular is because, let’s face it, the premise is pretty irresistible. Who, with the vaguest sense of right and wrong, has never sat, feeling frustrated and impotent at the injustice that is manifested in the world around them, and which assails us daily on the news? Who hasn’t fantasised about having some means by which to rid the world of evil – of psychopaths, of serial-killers, of rapists, of child molesters and scum which ruin the lives of innocent people – at no personal risk or implication? Wouldn’t that be just perfect? 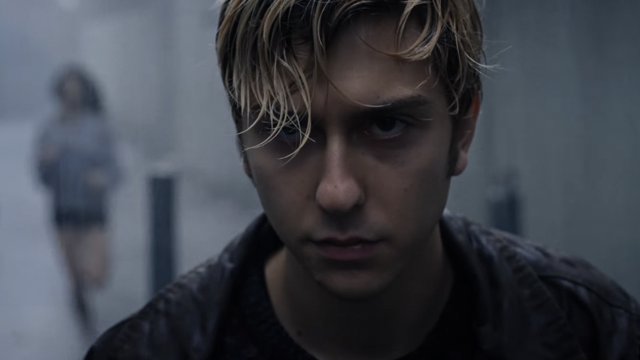 Therefore, we can’t fail to be captivated when such means falls into the hands of a handsome, idealistic, young hero, who now feels that he has the opportunity to make the world a better place by cleansing it of evil.

Light Turner uses the ‘Death Note’, and assumes the identity of ‘Kira’- a mysterious, invisible vigilante who takes credit for the unexplained, sudden deaths amongst the criminal fraternity, and gains a huge following from a predominantly grateful public.

Of course, things are never that simple. The law does not take kindly to vigilantes, no matter what public opinion might be. Plus, it is Ryuk who chooses the recipient of the ‘Death Note’ book. He is not a benevolent entity, he’s a bored and mischievous ‘death god’ and he decides (in this remake) to put it into the hands of American High-School students – what could possibly go wrong?

I say ‘students’ because in the Netflix version, Light has attracted a girlfriend, Mia Sutton (Margaret Qualley) and it’s not long before Light lets her into his secret.

It would be a spoiler if I was reviewing the original films, as there the information was saved as a shock revelation given out when we are well into the story, but as the Netflix version chooses to give the game away at the beginning, I am spoiling nothing when I say that the police investigator charged with tracking down the vigilante ‘Kira’, is none other than Light’s own father, Detective James Turner. 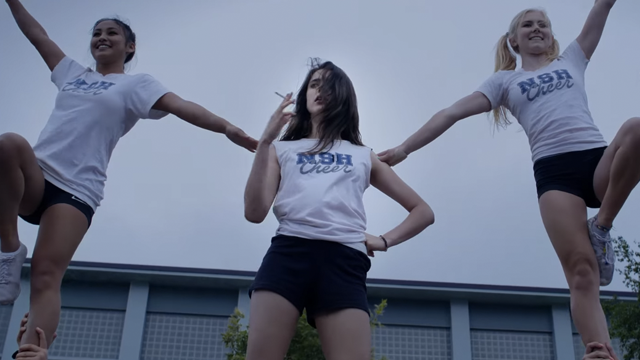 When the trailer was first released, the Netflix remake was plagued by concerns regarding the casting and non-Japanese setting (the Netflix version takes place in Seattle). Nat Wolff (Paper Towns, The Fault In our Stars) was chosen to play the lead character, ‘Light’ Turner, while Keith Stanfield (Get Out, Straight Outta Compton) has the part of his adversary, the young detective known only as ‘L’.

This alas, is where the problems start – no reflection on the young actors in question, they can only do the best they can with what they’ve got, and Wolff and Stanfield do a reasonable job of playing games of one-upmanship off each other, as much as any bright, testosterone-fuelled young men are likely to do.

In the Japanese films however, the original characters – the cool, calculating, ‘Light’ Yagami (Tatsuya Fujiwara) and the marvellously odd, astute and compelling ‘L’ (Ken’ichi Matsuyama) are portrayed as two brilliant young minds in a constant cat and mouse game of brains and determination, symbolized in the chess game that they play together.

‘Light’ is a clever, high-achieving law student and ‘L’ – well, he’s a one-off – a genius detective with a sweet-tooth and vaguely goth inclinations. These two play a complicated game, in which they jockey for supremacy and outwit each other in many twists and turns using ingenious planning and foresight – it’s a chess match of constant strategic moves.

‘L’ has to expose who the vigilante ‘Kira’ is, and how he carries out his death sentences, and ‘Light’ has to deflect his tenacious opponent from the trail. What creates drama is that they both ‘know’ the truth, but ‘Kira’ wants to continue his ‘cleansing’ and ‘L’ needs to stop him – but he needs proof. 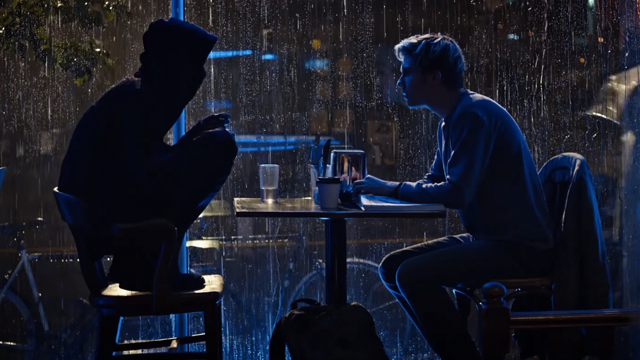 In some ways, the two young protagonists are mirror images of each other, two sides of a coin. There is mutual-understanding and even regard between them, but the two are opposites, the twain can never meet. Their rivalry escalates into a duel to the death.

Don’t expect any of this subtlety or complexity from the Netflix remake – these are more mundane protagonists that lack the insight, unsettling charisma and clever calculatedness that defined the duo of the original. Perhaps the Netflix execs felt that the potential teen demographic might identify more strongly with er…less formidable intellects?

Admittedly, director Wingard and adaptors Charley and Vlas Parlapanides and Jeremy Slater, had the unenviable challenge of telling at least the gist of Death Note‘s complicated and twisty storyline in under two hours, and no-one could expect a satisfying retelling under those restrictions.

In an interview, director Adam Wingard (Blair Witch) admitted that his Death Note is based only loosely on the source material. The frustrating thing is, that it has enough of the original ingredients to make fans hopeful, but ultimately, it settles for being a workman-like horror fantasy, suitable for an undemanding audience. It is entertaining enough to make it worth a watch, and I would encourage newbies to do so, as they will probably like it – but fans of the original can expect to feel disheartened. 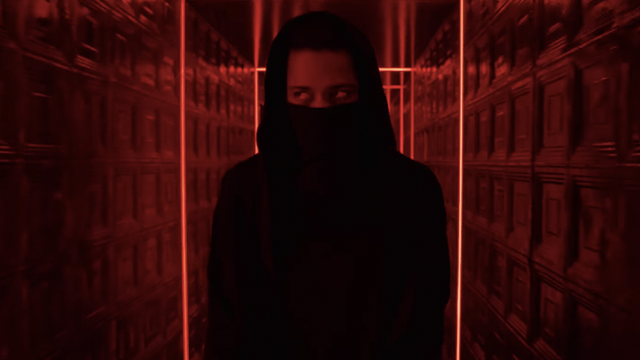 The Netflix version tweaks the storyline in order to include the inevitable ‘High-school movie’ conventions, including the clichés of teen infatuation, dopey school bullies, the high-school dance, and some Final Destination inspired gory death scenes.

Light’s girlfriend Mia is merely a high-school teen version of her character’s inspiration from the original, the quirky TV star, Misa Amane. Unlike Misa, Mia is not a perky, manipulative pop-idol and goth-punk, and is far from being obsessed with Kira/Light.

Netflix’s Mia is a newly created character, interesting in her own way, but added to include some hot, teenage action and more questionably, to deflect blame away from Light, who is a flawed, but far more conventional ‘hero-type’ in this storyline – a bright but lovelorn teenage boy who makes some unfortunate decisions influenced mostly by his hormones. Ahh, bless…

Before we get too despondent, I can say that there is a clever plot twist in the third act of the Netflix version which indicates that we should not underestimate Light’s intelligence, but which also rather deviates from character and strains the logic. It also serves to leave an open ending, anticipating possible sequels, (which would be alright with me, there’s still plenty of material). 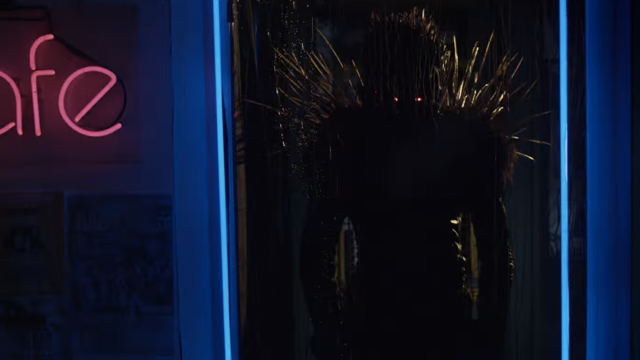 The Netflix remake rather misses the entire message of the original Death Note – which is that power corrupts. It barely touches on the themes that gave the original depth and intrigue and lacks its tension-building storytelling, which left the viewer wondering where the latest development might lead, and who would win. It’s the version for people who can’t cope with subtitles.

Surely, American audiences are no strangers to TV sociopaths, not even teen ones? However, one suspects they may also be inured to a greater cultural sympathy for vigilantes meting out justice – and of course to guns, lots more guns.

I would however, recommend anyone not familiar with the original to give the Netflix remake of Death Note a look, it is, as I have indicated, a great premise for a story and the remake does a relatively decent job of taking audiences on a dramatic and amusing ride (and any scene with ‘death god’ Ryuk in it is worth watching, although here, he isn’t quite as flamboyant an entity).

Close to the denouement, Detective Turner says to Light, his son, “Sometimes you have to choose the lesser evil,” – which it exactly what viewers of the Netflix remake will be doing. They can expect lesser evil, lesser intrigue, lesser characters and lesser plot. If the viewer is unfamiliar with the Japanese versions, I can only hope the Netflix remake may encourage them to seek out the originals, if only to see how they have been short-changed.