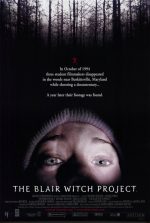 The Blair Witch Project is ‘The Cardiff Giant’ of modern horror films. The film employed the now common trope of “found footage” to give an authentic and haunting atmosphere to the story. The movie was also one of the first to use the internet to reinforce the found footage concept, going so far as to hire actors to pose as policemen for interviews and post pictures of artifacts found at the crime scene. The directors even filmed a “mockumentary” that ran on the SyFy Channel in advance of the film’s release.

The directors also listed the actors as deceased or missing and passed out flyers at the Sundance Film Festival offering rewards for information as to their whereabouts. The promotions paid off handsomely as the film became one of the most profitable independent movies ever released.

I’ve watched the movie half a dozen times looking for some redeeming features. Although it was eerie in some parts and the ending was well done, overall the film wasn’t satisfying on any level. 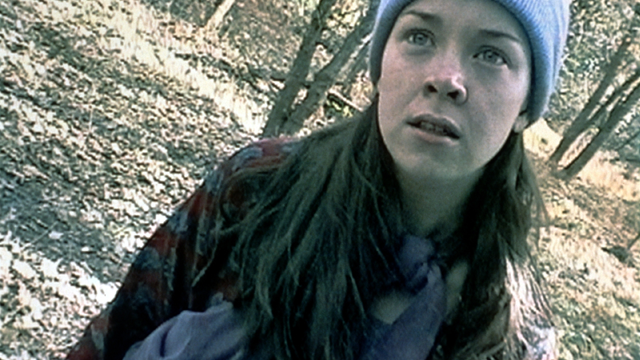 The story involves three film students venturing into the woods near Burkittsville, Maryland to shoot a documentary on the legendary Blair Witch. A series of unexplained murders and disappearances form the basis for the stories and the students are warned by locals that the woods are haunted.

As the group moves deeper into the woods weird events begin to vex them. One morning they awake to find four cairns surrounding their campsite. They hear twigs snapping and strange noises at night. On one occasion an unknown presence shakes their tents. They get lost and walk around in circles. The students come across a grove with strange stick figures suspended from the branches.

The tension builds, somewhat, until Josh freaks out and runs aimlessly into the woods. That night Michael and Heather hear what seems to be Josh screaming his guts out. In the morning Heather finds a fragment of Josh’s shirt with a few teeth, some hair, and what appears to be a piece of his tongue.

Heather and Michael rapidly descend into irrationality as they search for Josh, finally finding the supposed Witch’s house. The final scenes are by far the most compelling of the film. 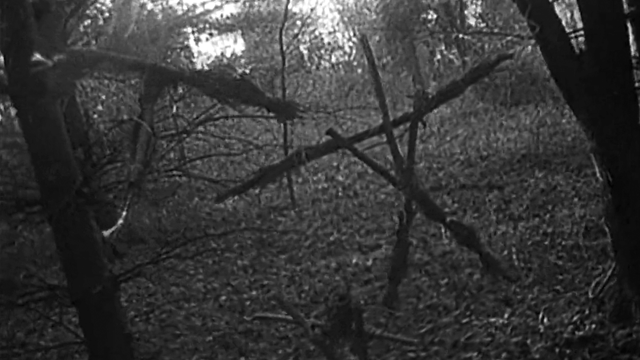 The oft discussed cinematography was shot using CP-16 and Hi8 hand held cameras, used by the actors themselves. This accounts for two weaknesses of the film. The cameras gave a rather shaky, at times, unwatchable quality to the movie. Also, found footage can be used effectively if it advances the narrative, as it did in Cannibal Holocaust. Unfortunately, in The Blair Witch Project the use of the camera is not restricted to scenes that add meaning to the plot, character development or creating atmosphere. Here, we are subjected to mundane conversations, childish rants and seemingly endless quaking footage of the students walking and walking and walking through the forest.

There is much to be said for subtlety in the context of a horror film. The movie however, takes it to the extreme. Even in a movie theater, the sounds the group hears are so faint I had to wonder what they were making such a fuss about. The same criticism goes for the absolute lack of action for the majority of the film. Maybe it’s just me, but a pile of rocks and hanging twig fetishes are not enough to set an ominous mood.

The actors had to improvise each day’s filming and it showed. When the group is scared they come off as hysterical, even when the threat is mild or nonexistent. There are scenes where the trio is reduced to bickering and fighting amongst themselves, a normal reaction considering their dire circumstances. However, their collective whining and illogical responses border on parody and are more annoying than effective. Indeed, during one sequence, I fervently hoped for the Blair Witch to dispatch them all, or for a bear to saunter into their campsite and devour each one of them. 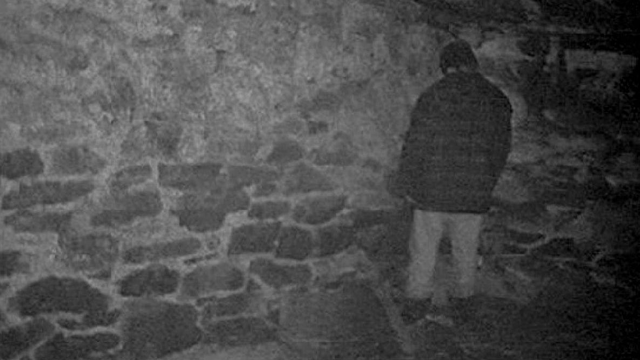 To be fair, besides the ending, there were a few effective scenes. Towards the end of the film, very convincing Heather, at her breaking point, gives a heartfelt and emotional message via camera. The lighting and claustrophobic setting are quite well done.

Overall, though, The Blair Witch Project just didn’t convince me. It was surprising then that the critical response to the film was so positive. Most major critics praised the effort. Typical of the reviews the film garnered, Todd McCarthy of Variety said, “An intensely imaginative piece of conceptual filmmaking that also delivers the goods as a dread-drenched horror movie, The Blair Witch Project puts a clever modern twist on the universal fear of the dark and things that go bump in the night”. I blame it on mass-marketing hysteria.

As for me, The Blair Witch Project was one found footage film that should have stayed lost.

The Cardiff Giant was one of the world’s most famous hoaxes, the creation of a New York businessman, George Hull. He had some workmen carve a ten-foot man out gypsum, and embellished it with acids, dyes and sculpting. He then buried it on a farm owned by his cousin. Sometime later he hired some men to dig a well, who “discovered” it. Hull displayed the attraction and was soon raking in large sums from gullible spectators, despite the fact archeologists and geologists declared it a fraud. Eventually, the plot was exposed and interest in the giant waned.

The term is used now to denote any attraction, fraud or similar endeavor designed as a tourist trap or to trick unwary consumers.