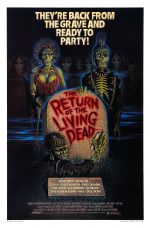 Following the success of Night of the Living Dead (1968), George Romero’s partner and co-writer John Russo wrote [the 1978 novel] Return of the Living Dead. A few years later, all of the partners agreed to a ‘quit claim’ where Romero kept the rights to the word “Dead” and Russo and the other partners retained the rights to the use of the words “Living Dead”. This way Romero had no claim on his partner’s properties and vice versa.

Tobe Hooper, originally brought in to direct the feature [film adaption], dropped out when production delays and script problems shelved the project indefinitely. Dan O’Bannon, the writer of Alien and Dead & Buried, came in to clean up the script and direct. 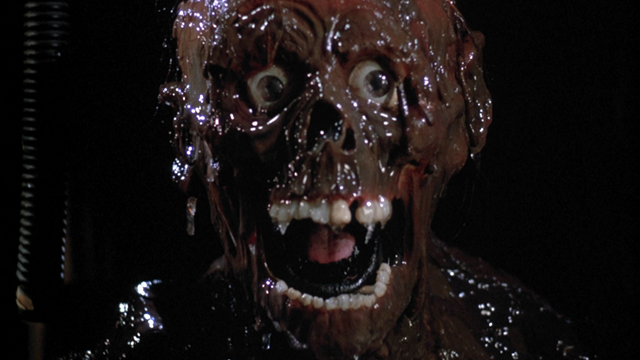 The story starts with the discovery of two cylinders in the basement of a medical warehouse. The army had put them there after some sort of disaster, then promptly forgot about them. Frank (James Karen) an older bumbling foreman tells young Freddy (Thom Mathews) the disaster was what inspired the movie Night of the Living Dead, and whatever is in the cylinders must be evidence of the event.

The two goofballs disturb one of the canisters, causing a breach and toxic gas spews out, knocking both of them cold. When they wake up, they both feel like shit and summon their boss. He arrives to find all of the dead specimens held in the warehouse re-animated, including one chilled, very pissed off naked corpse. After they chop the cadaver into a dozen pieces, all still active, they tote the garbage bags full of body parts to their friend’s mortuary across the street. Their friend Ernie is suspicious as hell, especially when he asks them “what the hell are in those bags?” 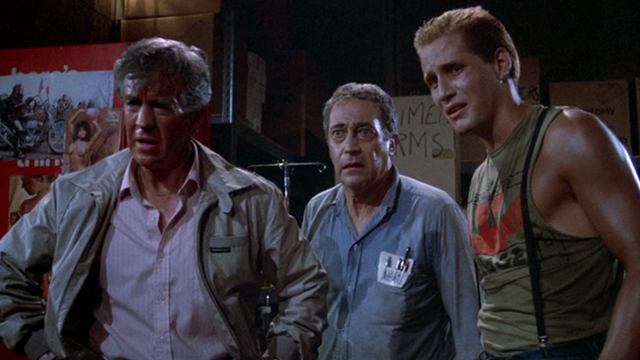 Clu Gallagher replies rabid weasels, and ol’ Ernie is even more incredulous, but he lets them burn the bags up in the crematorium.

This turns out to be exactly the wrong thing to do as the smoke rises just in time for a thunderstorm to blow through. The residue is quickly absorbed by the nearby graveyard, resurrecting a bunch of rotting, nasty undead.

Pretty soon, its zombies versus the humans once again, except these zombies are smart as shit. They talk, they plan and instead of munching fingers, toes and guts, they are interested only in brains. This makes the film less gory, although there are some beautiful shots of zombies biting into noggins, sending up geysers of blood. 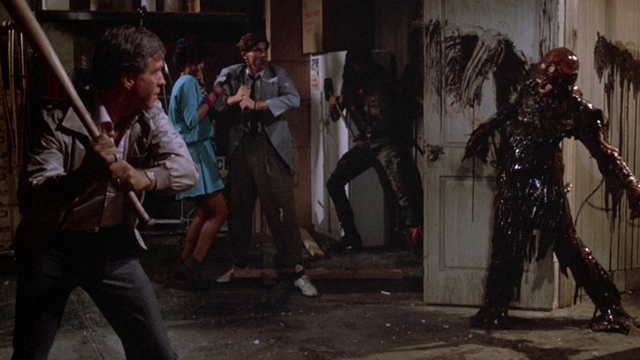 The zombies themselves are creepy, but not Night of the Living Dead creepy. They look like The Walking Dead cadavers, in fact, with some being slimy, others dried up like Mrs. Bates. The make-up, puppetry and animatronics are superbly executed. And whatever was in that canister is like a combination of Red Bull, Ensure and cocaine for these critters. Nothing really stops them or slows them down – acid to the face – no problem. Pickaxe to the head, is that all you got?

The dialogue is on point in every scene with each character having their chance to shine. The special effects are excellent, the scenes in the mortuary properly clinical. O’Bannon captures the strange menace of the rain swept streets of Louisville, Kentucky and a properly spooky graveyard perfectly. O’Bannon also figures out how to make the word “brains” sound funny in twenty or so scenes. The soundtrack, full of classic punk and deathrock music, gets you in the mood to have a great time.