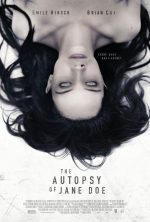 The concept of the ‘beautiful female corpse’ is by no means a new idea in the realm of gothic horror. In fact, it has been a stalwart of the genre since it began. Edgar Allan Poe was particularly partial to it and Bram Stoker took it to its natural conclusion when he hit upon the novel idea of having alluring dead ladies start walking about and seducing people. That notion made Hammer Horror films a fortune.

The story starts when an unnamed female corpse (Olwen Kelly) is found half-buried in the basement of a house where a brutal double murder has taken place. The crime scene leaves local sheriff (Michael McElhatton) with a conundrum: who is the buried girl and why were the erstwhile residents of the house trying to escape from their home when they died? 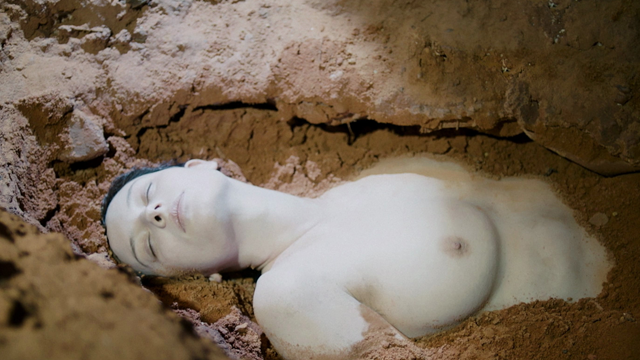 Disturbed by the pale, pristine body of the young woman, the sheriff takes the corpse over to his friend, small-town coroner Tom Tilden (Brian Cox), who works from a retro-styled funeral home. He asks him to rush the results from an autopsy so he can garner some clues as to the crime.

As they set to work, many strange and inexplicable details come to light. As they cut into the girl’s body, they discover internal wounds indicating that the woman suffered various prolonged and vicious tortures, yet externally, the girl’s flesh remans unmarked, and serenely alluring. Even as they cut deeper through the layers of her body (the prosthetics here are outstanding) the nubile corpse exerts a disturbing sexual presence. 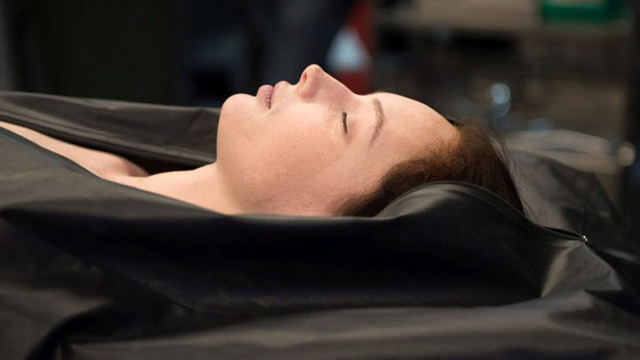 As the night wears on, news reports suggest a violent thunderstorm is raging outside. Whenever the men set about continuing their work on the body, the radio interrupts with bursts of a sinister children’s song, ‘Open Up Your Heart (And Let the Sunshine In)’. The electricity supply becomes erratic, the ancient elevator ceases to function and the only other escape route from the morgue is blocked by a fallen tree.

Loath to abandon workaday logic, but as events prove increasingly ominous and inexplicable, the men have to admit that this particular autopsy is exerting a horrifically malign influence. It’s not long before the mortuary itself begins to stir and matters take a deadly turn.

Admittedly, I guessed the probable origins of the corpse not too long into the film, because there are clues and I’m very familiar with the genre. However, The Autopsy of Jane Doe offers some very clever devices, such as the tiny bell tied to the toe of a corpse to make sure it’s dead and not just comatose, a tradition which Cox’s old-school coroner still adheres to. These come into play most effectively as the film unfolds. 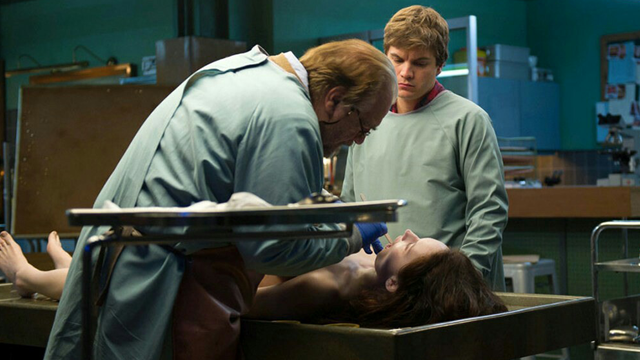 The fantastical elements of The Autopsy of Jane Doe are grounded by solid, character-driven performances by the two leads. Brian Cox again proves he can raise the calibre of any project he’s attached to. Emile Hirsch holds his own with a subdued and skilful turn. The film benefits hugely from their endearing father/son rapport.

The casting call for this movie must have caused many a serious young actress to throw her hands up in exasperation. Probably it read something like: “Young and attractive actress required. Must be willing to remain naked and motionless throughout duration of filming. Non-speaking role, but large amount of exposure.”

According to many actresses, this kind of casting call for a horror movie isn’t as unusual as they’d like it to be. However, the unsung virtuoso of The Autopsy of Jane Doe is Olwen Kelly, having to be nude and immobile throughout. She appears totally lifeless while being prodded and jabbed from all angles. Despite the distraction of her conventionally cinematically perfect (albeit inert) body, she stares blankly and frigidly through her many close-ups and yet somehow manages to convey an enigmatic, subtle menace. Let’s hope she has the opportunity to walk, talk and wear some cosy clothes in her next role. 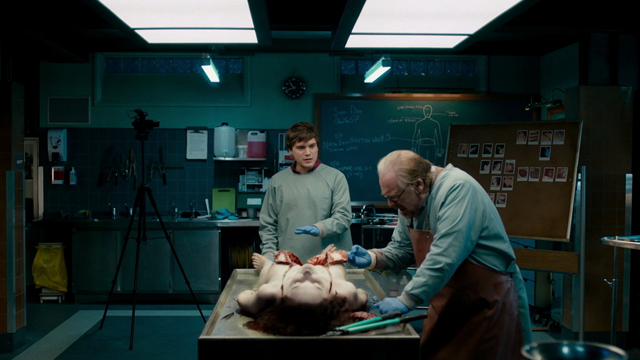 The Autopsy of Jane Doe conveys a real sense of apprehension and some good scares by means of excellent prosthetics, but using a minimum of special effects. Director of photography Roman Osin keeps the colours muted and oppressive, and creates darkness of palpable density. Music is minimal – predominant are the grisly sounds of snapping bones and flesh being pried and peeled open.

Fuelled by a more diverse influx of writers and directors, and punctuated by some great performances, the horror genre is fast becoming a favourite way for indie filmmakers to tell personal stories, make social commentaries or just scare and entertain audiences anew, by having an unusual take on an old motif.