The Void (2016) (90 min)
Directed by Jeremy Gillespie and Steven Kostanski. 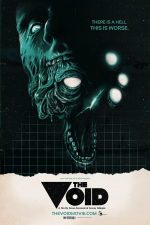 Canadian writer-director team Steven Kostanski and Jeremy Gillespie are part of the Astron-6 collective, whose work includes the playful retro horrors The Editor and Manborg, but their mainstream credits are in the VFX and art and makeup departments of larger projects like Suicide Squad and Pacific Rim.

They also make full use of their expertise in the realm of strikingly macabre physical effects and choose to largely eschew the use of CGI.

The movie begins one night, as small-town policeman Dan Carter (Aaron Poole) is warned about an incident on his patch, and while patrolling nearby he happens upon local druggie, James (Evan Stern) stumbling wounded across a deserted woodland road. 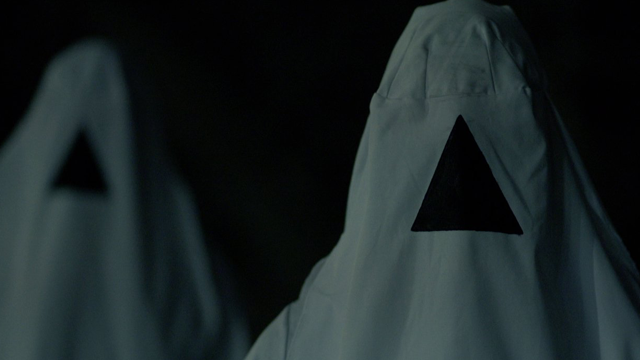 Deciding the blood-stained and delirious James needs medical attention, he radios in to say that he is taking him to a hospital. Although still nominally open, the nearest hospital is in the process of relocating after a fire, and is operating on a skeleton medical staff of four people.

To complicate matters, policeman Dan’s wife, Allison (Kathleen Munroe) is a doctor at the hospital and the pair have become estranged after the stillbirth of their baby. Allison’s mentor, senior doctor Powell (Kenneth Welsh), sympathises with them both, because he is also still in deep mourning for a young daughter that he lost some time ago to an incurable illness.

In the hospital waiting room we find a pregnant teenager (Grace Munro) and her kind grandfather (James Millington), while the sole remaining patient in a bed is being watched by Kim, a keen but inexperienced and lackadaisical intern (Ellen Wong). A crusty old State Trooper (Art Hindle) arrives and insists on taking over the proceedings. 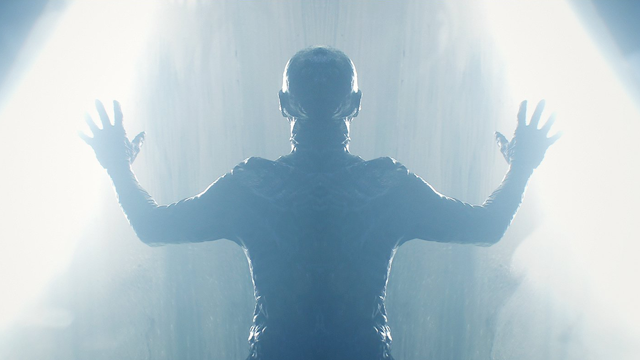 However, when patrolman Dan tries to leave the hospital, he is confronted by a horde of white-robed, knife-wielding cultists, who have silently amassed around the building, wearing hoods painted with black triangles. They force him back inside.

Before Dan can discover the purpose of the creepy crowd who have surrounded the building, or explain the situation to the State Trooper, father-and-son vigilantes (Daniel Fathers and My Byskov) burst in and threaten all assembled with shotguns. They declare their intention to kill James, the lowlife kid that Dan brought in for treatment, a course of action they insist is non-negotiable.

Meanwhile, a seasoned nurse inexplicably starts to behave violently and brutally murders the remaining patient in his bed. When she is shot dead by the shocked State Trooper, her corpse begins to messily metamorphose into a thrashing, tentacled creature. 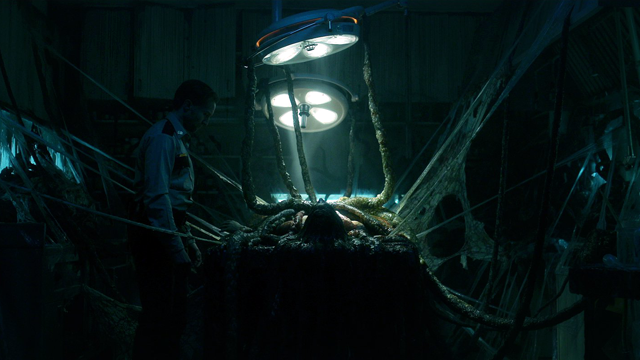 As the body count rises and all the corpses sprout hideous extrusions, transforming into bizarre lumbering creatures, the increasingly bemused and horrified inmates realize that they are dealing with things beyond the pale. It becomes clear that the cultists outside are less interested in attacking the hospital, than in keeping something confined inside.

As the puzzle intensifies, Dan finds that he must lead a motley crew on an expedition down into the bowels of the burned-out hospital basement and into a nightmarish, otherworldly realm. Meanwhile, his wife Alison is kidnapped and the pregnant teen goes into labour…

The Void avoids jump scares, but instead suffuses the film with dread, heightened by grotesque monster effects which are clearly a labour of love for Kostanski and Gillespie. Their array of abominations become pretty gross to look at, but you can’t help but admire the skill and craftsmanship involved.