Written by David Chaskin.
Adapted from the 1927 short story The Colour Out of Space, written by H.P. Lovecraft.
Starring Wil Wheaton, Claude Akins and Malcolm Danare.
Followed by Curse II: The Bite (1989) 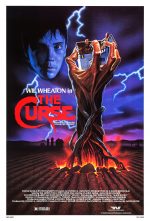 Adapted from H.P. Lovecraft’s short story The Colour Out of Space, David Keith’s 1987 directional debut The Curse is remarkably faithful to the source material; albeit poorly executed.

I must admit that I was unaware that The Curse was a tale of Lovecraftian horror until I realised the thematic similarities to Daniel Haller’s Die, Monster, Die! (1965); wherein a radioactive meteorite hits Earth with horrific consequences.

What originally attracted me to The Curse however, was this feeling of nostalgia from my youth. Back in the 1990s, I was watching a lot of horror movies that my mum had recorded onto long-play VHS. We had stacks of tapes, some of which were recorded from cable, whilst others were recorded from terrestrial TV; the commercial breaks patiently, but haphazardly edited out.

A typical VHS tape would consist of three (maybe four) films squeezed together and after each film my thirst for knowledge would grow exponentially. I wanted to know if there were any sequels, what other films the director had made, how the special make-up effects were created, if the actors appeared in other genre titles, etc. 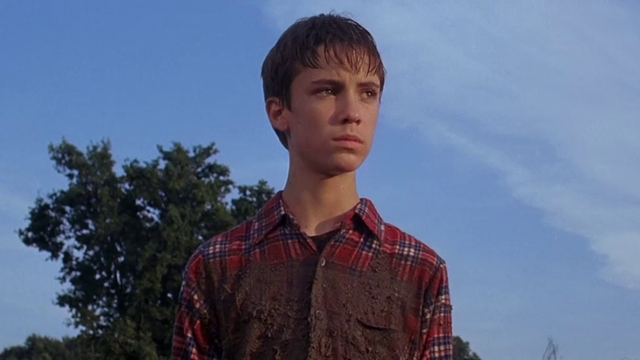 One of these tapes had the title The Bite scrawled across the label in permanent marker. Assuming it would be a vampire flick, I shoved the tape into our VCR! The film began immediately with no title sequence or opening credits; the clear result of hitting the record button a few minutes after the movie had actually began. After a few tracking adjustments, what followed was a memerising tale of a cursed snake bite; with effective gory SFX courtesy of Screaming Mad George (Society / Bride of Re-Animator).

Just as soon as the closing credits appeared, I was dialing up to the internet (via a 56k modem) in search of more information surrounding this curioso LP VHS. The world wide web was an exciting time for discovery. Of course, it still can be, but back in 1998 owning a 486 computer and having access to a dial-up connection opened up an entire world of media previously undiscovered by 12 year-old me. It was via the web that I discovered I had witnessed Frederico Prosperi’s Curse II: The Bite (1989), a sequel in name only to The Curse.

What was The Curse, and where could I get my hands on it? This goddamned movie somehow evaded me for years…and it stars Wil Wheaton! Was it worth the wait? 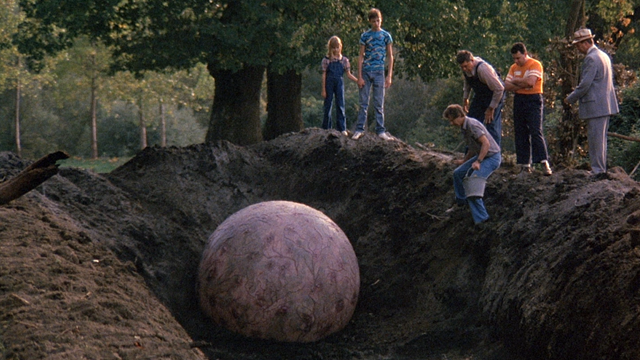 “O’ Lord, we thank thee for the food we are about to receive. We know that we stand in the danger of damnation and hellfire, and that the Lord hates a sinner. But with your grace, we will become pure as the driven snow. Amen.”

Zack (Wil Wheaton – Star Trek: The Next Generation), along with his sister Alice (Amy Wheaton) and his mother, Frances (Kathleen Jordon Gregory) live and work on a family-owned farm in Tellico Plains, Tennessee, under the devoutly religious Nathan Crane (Claude Akins) and his son Cyrus (Malcolm Danare).

Nathan is a stern man trying to keep his family in line, whilst holding onto his farm property from the financially motivated advances of Charlie Davidson, a local realtor (Steve Carlisle). Nathan’s land is rumoured to be one of the zones selected for a new reservoir in Tellico Plains, and Davidson wants to acquire the land before entering into what could potentially be a lucrative government contract.

Zack finds it difficult to readjust to this new family life after losing his own father; often butting heads with his stepbrother, and frequently feeling the sting of his stepfathers backhand because of his outspoken nature. Frances herself is grateful to Nathan for providing her family a new home, but feels starved of attention. On one particularly stormy night her attempt at embracing Nathan is rejected.

“No. It ain’t proper. The man should be making advances, not the woman.” 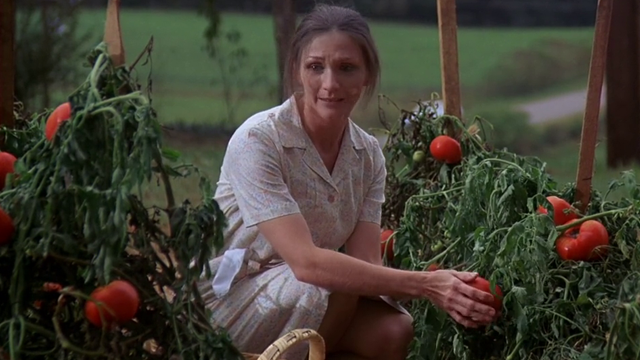 Upset and frustrated, Frances leaves the farmhouse during the middle of the night, shortly after Nathan has fallen asleep. From another room, Zack is awoken by the storm and ventures to his window, where he witnesses a mysterious object falling from the sky and crashing onto their farmland! The noise causes the rest of the Crane clan to awake and venture outside towards the eerie glow of the spherical object. Amongst all the commotion Nathan witnesses Frances emerge from a smaller property nearby, followed by the hired farmhand…

Enlisting the assistance of Alan Forbes (Cooper Huckabee), a local physician, the object is initially thought to be that of a meteorite. But before long, the object dissolves into a glowing, multicoloured liquid which seeps into the soil. Forbes subsequently dismisses the object as frozen refuse from an airplane, having been dissuaded by Davidson to contact the authorities, as he is worried that the event will discourage the Tennessee Valley Authority from building the planned reservoir in that area.

Tension builds in the Crane household as the harvest of vegetables and fruit become inedible; unknowingly contaminated by the water from the farm’s well. The animal that have also been exposed to the water become unpredictable in their behavior, and their meat tainted to the human tongue. Frances becomes sick; her face covered in sores and, more worryingly, her mental health deteriorates. Zack and Alice’s complaints fall on deaf ears, leaving Zack to procure clean water and canned or boxed foods for him and his sister.

“It’s the same water we’ve been drinking for days.” 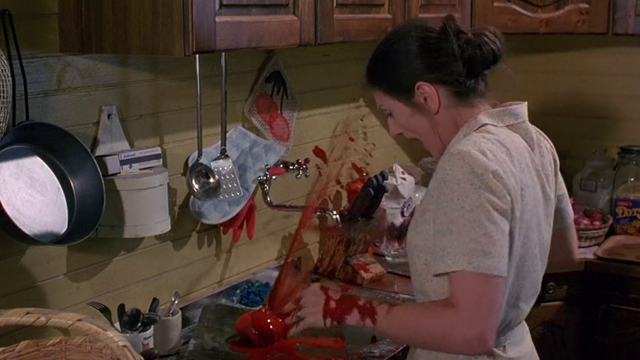 David Keith’s direction up to this point is paced well, and despite a few hiccups, works effectively in establish atmosphere. Kieth is in no hurry to offer copious amounts of gross-out splatter in The Curse, but when it does arrive, it does so in oozing glory. Vegetables, fruit and even live farm animals rot from the inside out with infestation, whilst unsightly sores continue to develop and fester on human skin. It is also during these scenes that Lucio Fulci (Zombie Flesh Eaters) makes his imprint. Although credited as an associate producer, Fulci supervised the second-unit SFX, which undeniably bear his influence.

As the story continues Nathan blames this ‘curse’ on his wife’s adultery, which leads to the climax of David Chaskin’s adaption of The Colour Out of Space. Unfortunately it is also at this moment where The Curse begins to fall apart itself…

“The last twenty minutes of the film are so disjointed that they virtually ruin the entire film.”
Charles P. Mitchell, author of The Complete H.P. Lovecraft Filmography (2001) 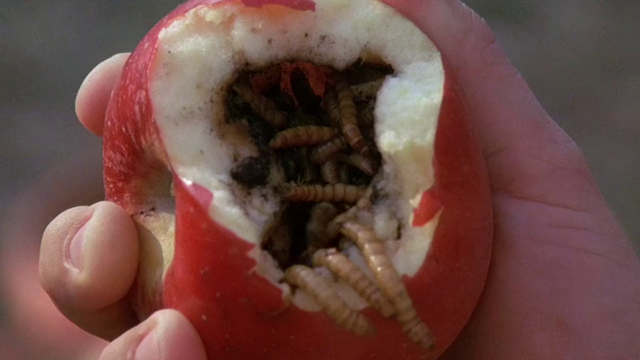 Now, I wouldn’t go as far to say that the climax ruins the experience, but there are elements that are rather incomprehensible. These are not ambiguous elements of the plot either… It is as if the filmmakers thought the effects-laden conclusion would be enough to justify what is a haphazardly edited and disjointed ending.

Despite being cast as the lead, Wil Wheaton is rather unremarkable here too. Now, before all the TableTop fans attempt to strike me down, I fucking love Wil Wheaton. Stephen King’s Stand By Me (1986) is ingrained into my childhood. His acting ability is solid. But in The Curse, he is just not given enough to do. His sister, Amy Wheaton, on the other hand at least gets to participate in a frenetic and disturbing scene of ‘nature running amok’. Claude Akins is the real bastard of The Curse, in his role of Nathan Crane. Even whilst his farm and family is literally falling apart around him, Akins remains the focal point due to his menacing performance.

David Keith provides a solid debut in the form of The Curse. If his name sounds familiar to you, it is because Keith has acted in many cult classics, including Firestarter (1984), White of the Eye (1987) and Carrie (2002). Despite the few missteps previously mentioned, The Curse is not only worthy of it’s cult status, but it is everything I had hoped it would be since my preadolescence discovery of Curse II: The Bite. The next question is… Will the The Bite be able to hold up to nostalgia?