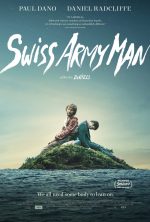 In Swiss Army Man, first-time directors Daniel Scheinert and Daniel Kwan (the Daniels) genuinely present you with things you’re unlikely to have seen before – and that, in the current cinematic climate, is a feat in itself.

With most people one knows well, one can say, ‘You’ll like this movie’ or ‘You won’t like this movie’, but Swiss Army Man is so without antecedent or relevant references, that I would hesitate to predict even how my nearest and dearest would react to it.

Admittedly, if one doesn’t like scatological humour (and I don’t) one might be wary, because this film is full of it. Despite all the references to bodily efflux, I still managed to find this film sweet, sad and strangely touching.

The Daniels have fashioned an idiosyncratic and inventive fable about loneliness, alienation, love, sex, guilt, compassion, and life in general, that is by turns silly, vulgar, moving, juvenile and quite profound.

One can certainly see why Swiss Army Man was a movie that was inevitably going to polarise opinions. It makes no compromises or concessions regarding curtailing its weirdness, so viewers (and critics) either hate it or love it dearly. I would have liked to have been a fly on the wall when this movie was pitched to a room full of studio suits. They must have been asked to imagine something like Cast Away meets Weekend at Bernie’s by way of an homage to Michel Gondry. 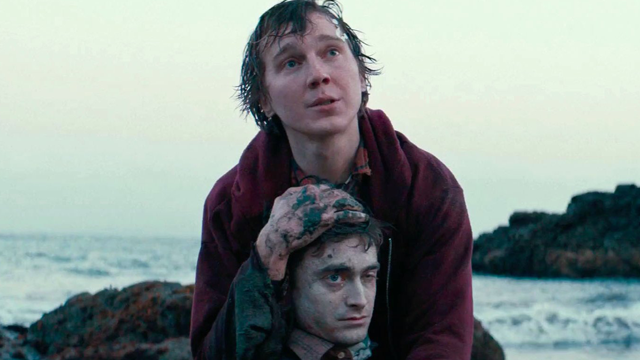 The film starts on a deserted island with a man named Hank (Paul Dano), so depressed by solitude and loneliness that he is about to commit suicide. At the last second he spots what looks like a shipwreck survivor (Daniel Radcliffe) who has washed ashore nearby. Desperate for a companion, he rushes to the scene.

The man alas, is dead. Hank can’t bring him back to life, but his attempts at resuscitation cause the corpse to release an extravagant expenditure of flatulent gas. Hank discovers that the body’s exorbitant farts allow him to ride the corpse over the waves like a jet ski until they both make landfall on a distant beach.

Rather than abandoning his dead companion, Hank christens him Manny (appropriate shorthand for ‘everyman’) and carries him through the forest in search of civilization. Hank discovers that Manny has a myriad of unexpected qualities, truly becoming a many faceted ‘Swiss Army Man’, useful for any number of important life-saving tasks, such as serving as old-style water pump, spewing water from his mouth. 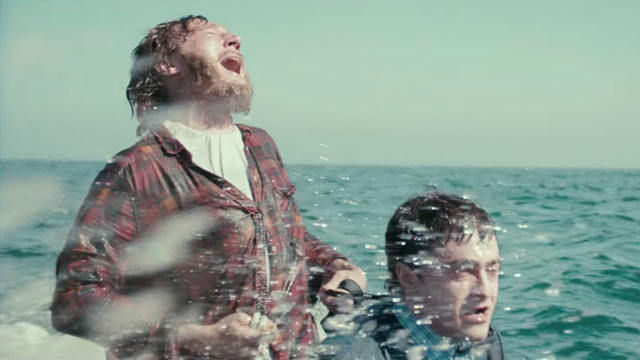 After spending the night in a cave, Manny unexpectedly develops the ability to talk, but appears to have a total amnesia about what it was like to be alive. This requires Hank to re-explain all the joys, mysteries, and disappointments of life and love to his curious, but inanimate, new friend.

Considering that the companions are one failed and one presumably successful suicide, there’s a poignancy to these exchanges. Hank confides that just before dying, he’d expected his life to flash before his eyes, and didn’t expect to see much. However, because he is also attempting to make the case for life to his already-dead companion, his task forces him to re-evaluate his choices and his view of his own life.

I couldn’t help feeling that their exchanges would resonate more profoundly with a wider audience if they were not so focused on excretions and involuntary sex reflexes. However, to counteract some of these profane aspects is an enigmatic sub-plot regarding the memory of a girl named Sarah (Mary Elizabeth Winstead), whose indistinct picture is preserved on a nearly-dead cell phone in their possession. 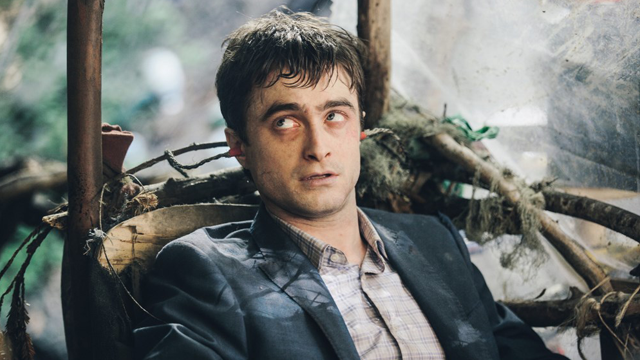 In the quirkiest sequence of the film, Hank tries to jog Manny’s memories of the experience of love. He does this by pillaging the garbage that has been tossed out onto the forest floor in order to build an ingenious recreation of a bus, a car, a café, and then he dresses up as a facsimile of Sarah, sporting a raggedy yellow sundress and mop-like wig.

Without Paul Dano’s extraordinary on screen innocence and warmth, Swiss Army Man would have reeked of bad taste and been subsumed by its own quirkiness. Dano manages to make the gross scatological subject matter and the most crass material, if not oddly sweet, then mostly inoffensive.

In addition, I saw some ungenerous critical comments suggesting that playing a dead body best suited Daniel Radcliffe acting range. I could not disagree more. Radcliffe’s performance required incredible bodily control and a remarkable lack of vanity, as Manny is contorted into humiliating poses and made to perform all manner of undignified acts. Where Radcliffe really shows his talent, however, is in his ‘dead-faced’ subtle evocation of Manny’s changing moods – from childlike astonishment, to horror, to whimsy and to anger. 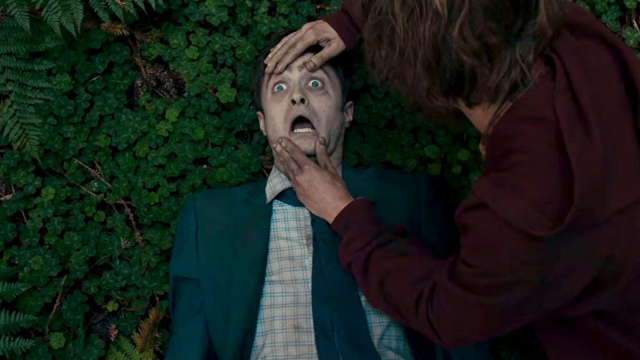 I must also highlight the unique score from Manchester Orchestra members Andy Hull and Robert McDowell. Virtually all music begins with either Dano or Radcliffe chanting or humming quietly to themselves, then builds into a full-blown track – sometimes joyful, sometimes melancholy, but always resonant.

Swiss Army Man remains a ‘Marmite’ movie, but it proves to be constantly inventive. It may be described in various ways as a fairy stories, a Frankenstein story, a love story, or an absurdist, existential comedy. One can only deal with it on its own terms.

In a time when moviegoers are subjected to a constant barrage of remakes, reboots or sequels, I for one am not going to turn my nose up at any movie which places almost all of its bets on being singular and unique.