“For 43 years the world has given Troma the middle finger…now Troma happily gives Séamus Hanly’s hilarious The Middle Finger to the world!” 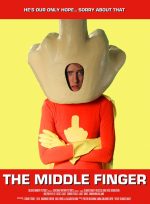 The Middle Finger stars Séamus Hanly as Dennis, a lonely, frustrated teenager who is reluctantly embedded with the symbol the middle finger and is transformed into a superhero. Now Dennis must awkwardly endure his training and save his world from extinction!

Levi White: What was your inspiration behind The Middle Finger?

Séamus Hanly: The film was mainly inspired by Red Letter Media’s film Gorilla Interrupted and Troma’s own Sgt. Kabukiman N.Y.P.D. which were two films I watched shortly before writing The Middle Finger. After previously making a more dramatic and artsy kind of no budget feature film called BenD, I decided it’d be better to make something more energetic and fun. Growing up with the Monty Python films and shows like Earthworm Jim and The Tick helped a lot too.

LW: How did you manage to get the film get off the ground?

SH: I had worked with Constant Motion Pictures before and was impressed with how quickly they were able to get projects going with limited resources and money. I pitched them the idea as something we could do quickly and cheaply and said we could do it with a small bit of money I’d saved up and they were completely on board.

LW: What was the process of getting the film made?

SH: By early 2015 I had a draft of the script and knew it was structurally how the film would go. Over the summer we started working towards getting a crew. A lot of the people who worked on the film are people I met as a frequent contributor of The Firehouse Film Contest, a monthly screening of short films in Dublin. It’s now three years old and has become a great melting pot of talented filmmakers used to making things with no money. As we went through production of the film I started adding jokes here and there and added an extra scene or two to the script that we could plan and film quickly.

LW: What was the most difficult scene to shoot?

SH: The climax scene was the one where we had to choreograph a 5 person fight scene in a short amount of time. It’s not exactly a complicated fight but figuring out when and where everyone had to go in each shot proved trickier than I thought. Towards the end we found ourselves really needing to get scenes in as fast as possible as we had rented the warehouse location and were late in our schedule. That said there was another fight scene where I got hit really hard in the right testicle so who knows which was worse.

LW: The cast has great chemistry, what was the casting process like?

SH: It was mostly friends of mine who are actors or comedians in Dublin that were cast in the film, so the process was mainly just me texting and emailing people if they were free in October/November to hang out and film. We made sure scenes were filmed quickly so it wasn’t out of their way to do it, and everyone was very enthusiastic. People like Alison Spittle, Rose Henderson and Dave Duffy, who all appear in the film, have a celebrity status in Ireland. I sometimes get asked how I booked them, but they were all people I had just met and worked with over the years.